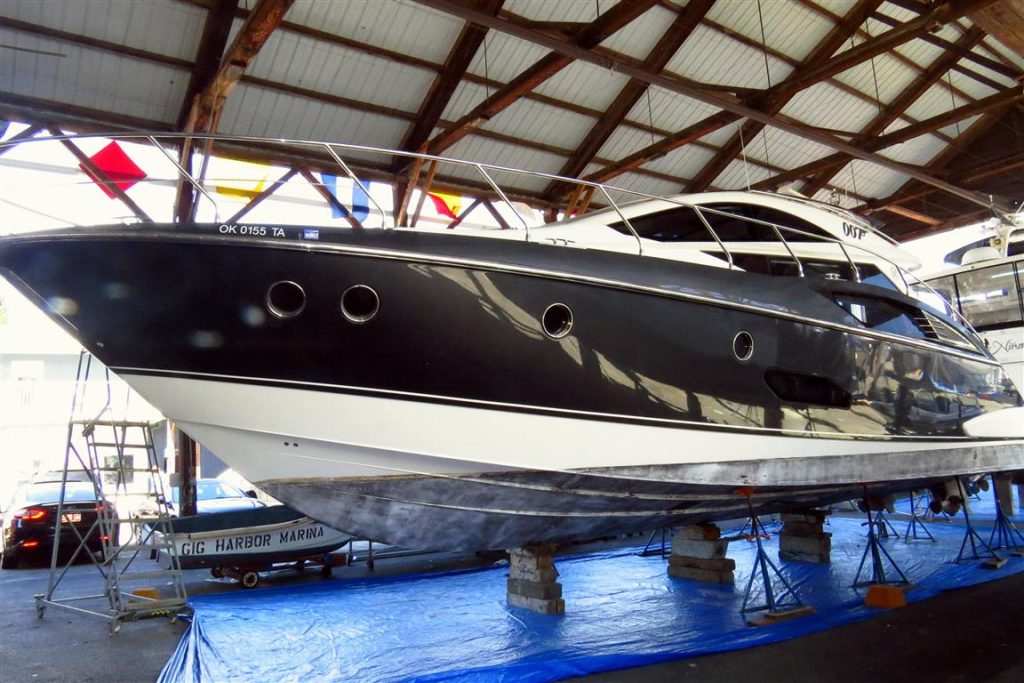 The sleek and sophisticated Marquis 50 Sport Coupe, named 007, is under cover at the boatyard for decontamination from invasive zebra mussels and for a fresh coat of bottom paint.

The Marquis’ owners, a retired oncology physician and his wife, a nurse from the same cancer clinic, are relocating from Oklahoma to a new life on saltwater in Gig Harbor. But their beautiful boat arrived with very unwanted aquatic hitchhikers that had to be dealt with before launching in the sound. 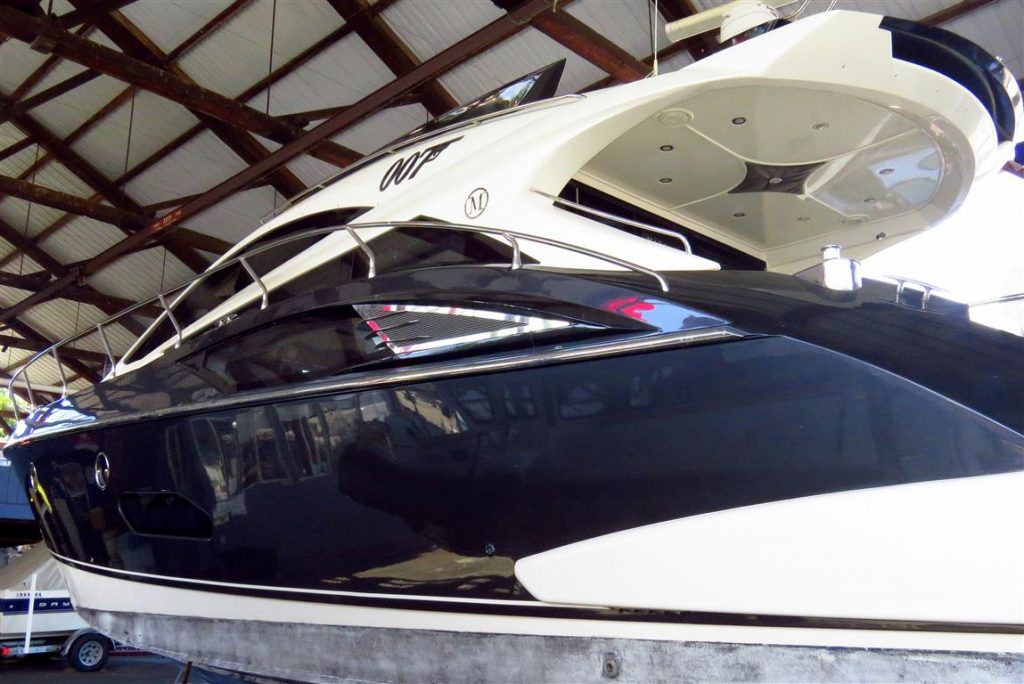 “It had zebra mussels so they brought the boat here for decontamination and bottom paint,” said Chris Hawke, service manager at Gig Harbor Marina & Boatyard.

The highly invasive and destructive zebra mussels and their close relative, quagga mussels, are native to the Caspian Sea and were introduced into the Great Lakes in the mid-1980’s from the ballast water of ships, according to the Washington State Department of Fish & Wildlife. Since then, zebra mussels have spread to more than 20 states and two Canadian provinces. 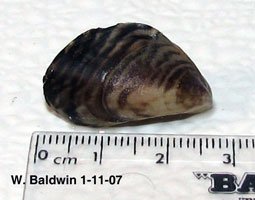 Invasive and destructive zebra mussels are usually the size of an adult fingernail.

Because the mussels can live out of water for up to a month if they are not subjected to heat or extreme drying conditions, they are easily transported on recreational boats. Zebra mussels are usually about the size of an adult’s fingernail, but can be as large as two inches or as small as a sesame seed.

Both marine and freshwater can harbor these invasive species. Where introduced they threaten native fish and wildlife by consuming available food and smothering native species. Zebra and quagga mussels clog power plant and other water intakes and have caused billions of dollars in economic and ecological damage to the Great Lakes.

Quagga mussels are present in Lake Mead in Nevada and Arizona and in Lake Havasu, Calif., a proximity that greatly increases the risk of introduction into Washington state. Accordingly, Washington’s Department of Fish & Wildlife takes an active role in monitoring vessels that enter the state.

The decontamination of 007 at Gig Harbor Marina & Boatyard had to be cleared through the Washington Department of Fish & Wildlife, which directed and assisted the boatyard crew in the process, Hawke said.

Out of State Boat Comes to Us for Zebra Mussel Decontamination

The process calls for completely washing a contaminated boat with a pressurized power sprayer using water of 140 degrees Fahrenheit or hotter. Contact with water at this temperature will kill quagga and zebra mussel juveniles and larvae in a few seconds.

The boatyard crew slowly and carefully sprayed the entire exterior of the 50-foot Marquis, paying attention to all the nooks and crannies where mussel larvae may have been lodged. The idea is to “cook ’em” with heat and “remove ’em” with the pressurized water, according to one website on zebra mussel decontamination.

The process with 007 was a little extra challenging with the vessel’s pod drives and forward-facing propellers — but then, a few extra Bond-inspired bells and whistles might be expected on a boat named 007. 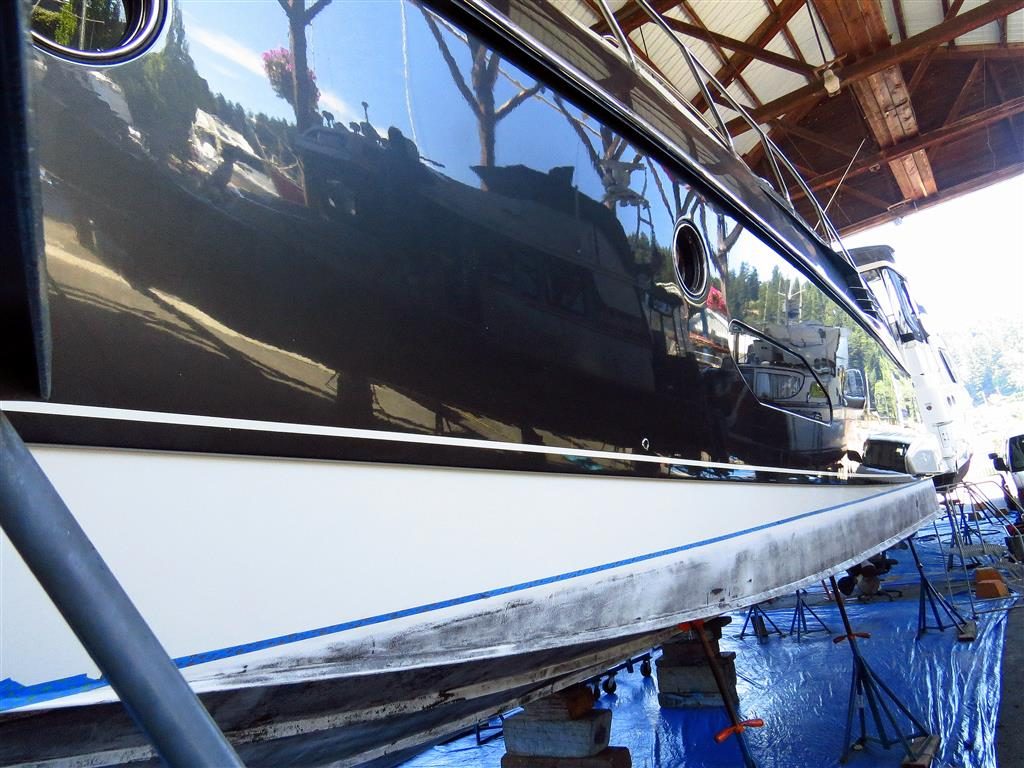 The stunning Marquis also has two air conditioning systems and generators and three main engines that had to be decontaminated, service manager Hawke said, as well as bilge water that had to be hit with 140-degree water for several minutes to kill any larvae.

“We’ve done zebra mussel decontamination on smaller boats, but not one this big,” said Hawke.

But not too big for the crew at Gig Harbor Marina & Boatyard. After a fresh coat of bottom paint 007 will be ready for its next special assignment — missions for recreation on Puget Sound.