Last night, the Gig Harbor Police Department showed us again why they have been ranked in the top 10 National Night Out celebrations across the country. 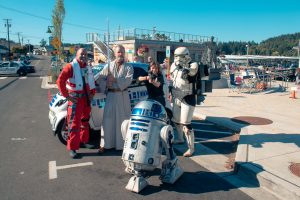 Star Wars characters in full regalia at the 2018 National Night Out in Gig Harbor.

Community and civic organizations came together to help build police-community relations with free food, including Gig Harbor Kiwanis’ grilling hot dogs and The Home Depot root beer garden, as well as public safety displays, including a K-9 demonstration from the Navy police at Bangor Naval Base in Bremerton.

Coupled with the City of Gig Harbor’s Summer Sounds at Skansi, National Night Out in Gig Harbor is hard to beat.

“Look at this venue, look at this this turnout, this is spectacular!” chief Kelly Busey said. “There cannot be a better National Night Out celebration in the country!” 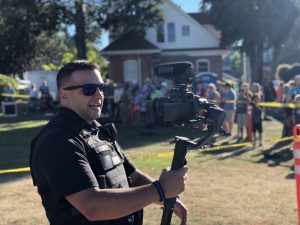 Community Service Officer, Adam Blodgett was the brains behind the last two National Night Out celebrations in Gig Harbor.

“Everybody came out, it’s been great community support,” Blodgett said. “We really appreciate it. Thanks for coming out and being with us in 2018. Enjoy the summer and be safe!”

We look forward to next year’s Night Out, and thank the Gig Harbor Police Department for their involvement in our community.

Like Loading...
Posted in Blog
← National Night Out Returns to the HarborProposal at Lighthouse Brings Love Full Circle →