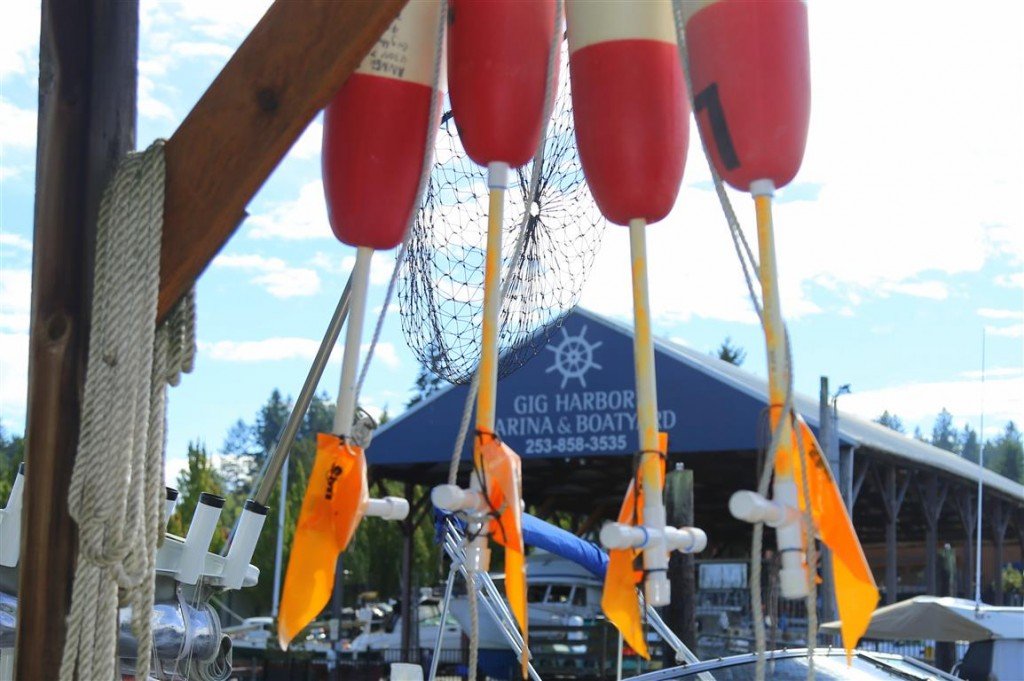 Exciting improvements are taking shape at Gig Harbor Marina & Boatyard, and the shapes are changing everyday — all toward the goal of creating a “first class experience” for visitors and tenants.

“We’re at the heart of it all,” said marina owner and general manager Ron Roark said as we toured the downtown Gig Harbor Marina & Boatyard this past summer. “So we are trying to create a first class experience for people who come here.”

As we walked around on that hot July day he pointed out his plans for numerous improvements and additions to the marina and boatyard along the historic Gig Harbor waterfront.  Now, a few months later, many of those projects are well under way or finished and customers and visitors are already enjoying the benefits. 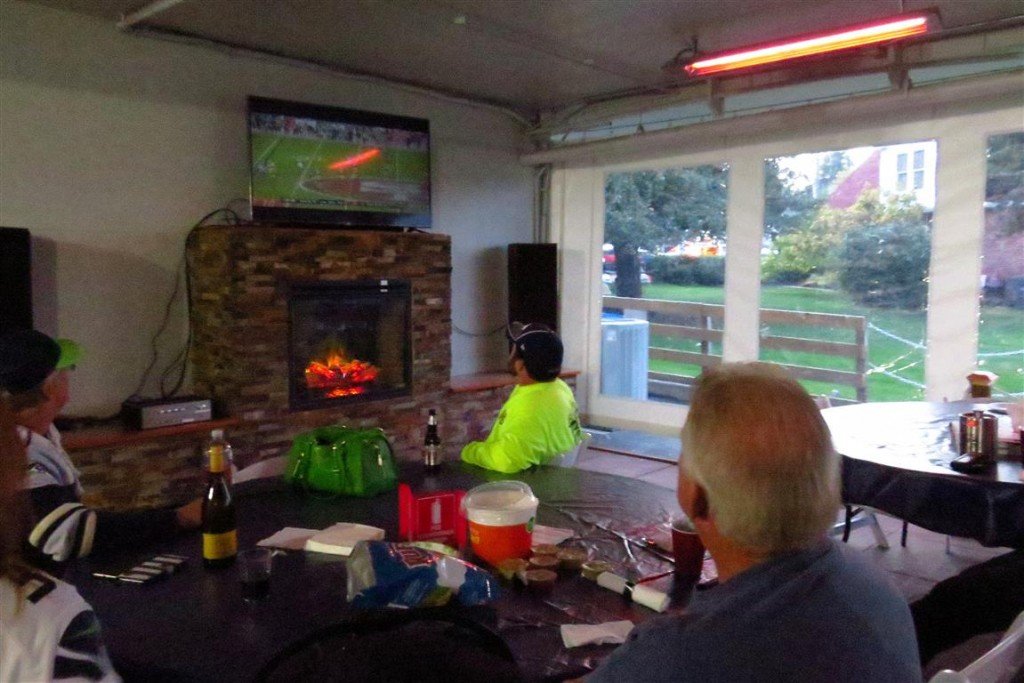 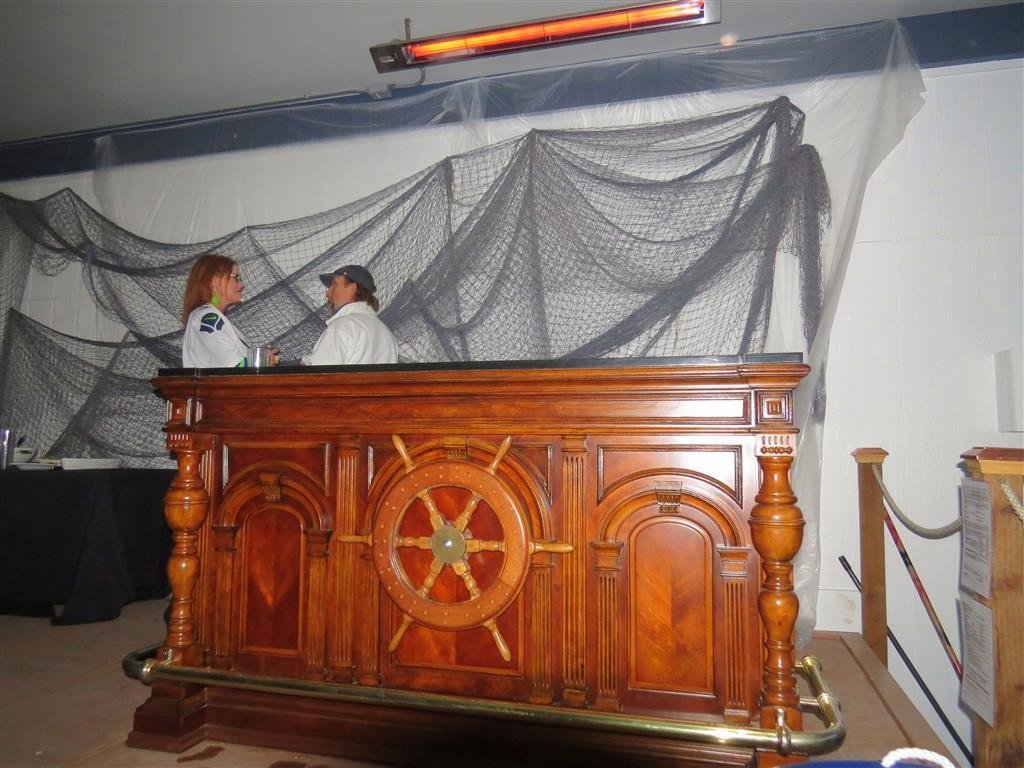 New decorative fish netting continues the nautical theme along one wall of The Club @ The Boatyard and a  beautiful carved ship’s wheel has been added to the front of the rich mahogany and brass bar. 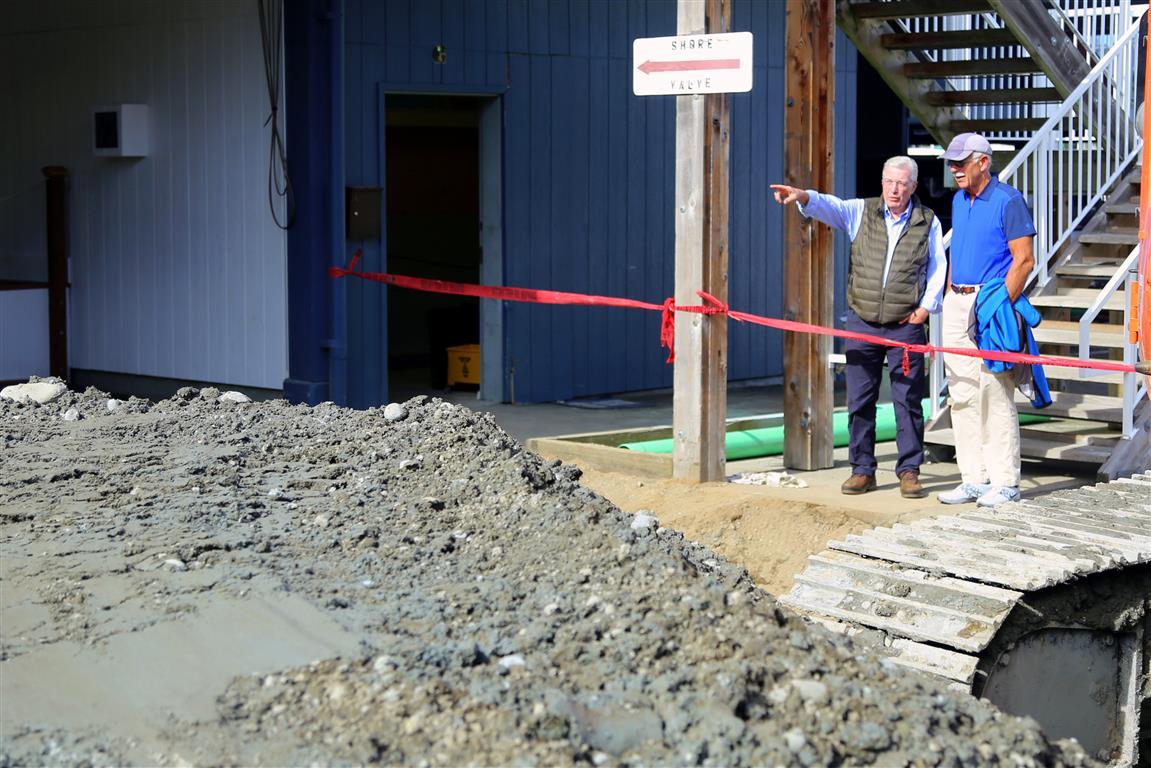 The driveway next to The Club at Gig Harbor Marina & Boatyard was dug up earlier this fall to install a sewer system and grease interceptor for the new food prep kitchen, above, through the doorway to the left of marina owner Ron Roark and visitor. The project is now finished and the driveway resurfaced for easy access to the marina and boatyard. 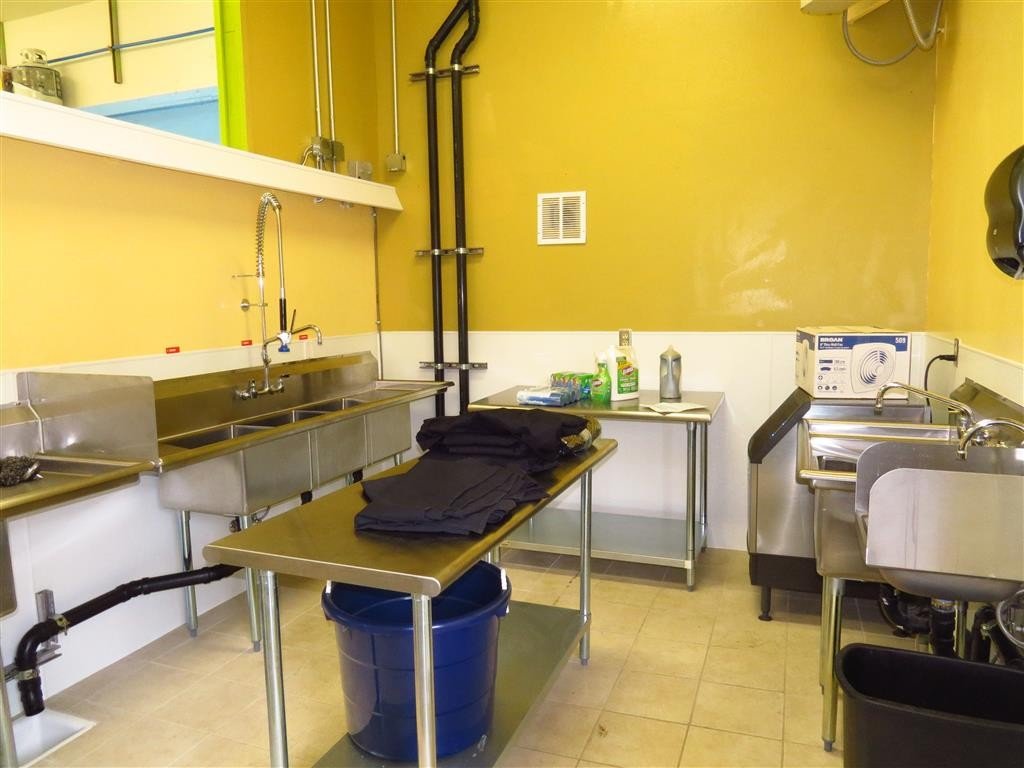 The new kitchen adjacent to The Club @ The Boatyard has already proven to be a valuable improvement for food preparation and catering staging for events at venue. 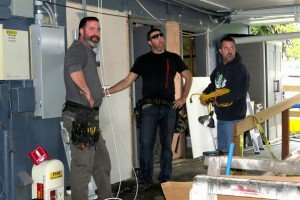 Electricians from Burris Electric were at Gig Harbor Marina & Boatyard recently to install additional infrared ceiling heaters to The Club. Electricians Darren Anderson, left, and Stephen Burris, center, also installed zone controls and heat controls for regulating the temperature inside the popular event venue, which has already been used by several groups this fall. Plumber Dennis Johnson, right, was onsite working on the new men’s and women’s restrooms.

Speaking of the new restrooms, this addition  — along with new showers — is likely to be the improvement at Gig Harbor Marina & Boatyard that visiting boaters will be the most happy about, says Roark.

“Showers are a big thing with boaters,” he said, “You can’t be in the business of guest moorage without showers — and a laundry facility,” which is also in the planning. 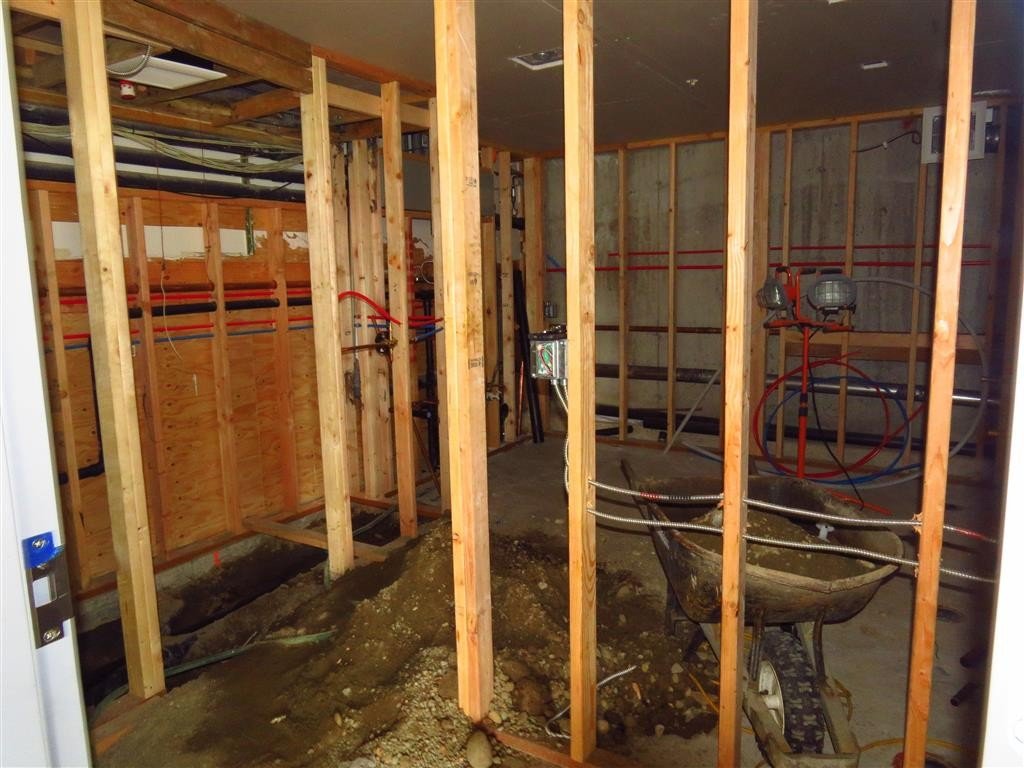 “We have had requests for showers for years,” said Mike Burris, project manager at Gig Harbor Marina & Boatyard, “and we have answered that. Everyone’s looking forward to it.”

The two new ADA restrooms will be attractive and needed upgrades from the marina’s current two restrooms.  The facilities will meet American with Disabilities Act standards for accessible design with roll-in showers, Burris said.  The women’s restroom will have three toilet stalls, two showers and a two- or three-sink vanity. The men’s room will have the same features along with two urinals and both restrooms will be fire system-protected with a sprinkler system.

Flooring and countertop materials haven’t been selected yet, but “it’s all going to be very nice in keeping with Ron’s goal of everything being first class here,” said Burris.

Improvements are also being made around Gig Harbor Marina & Boatyard to enhance operations for service and repair of boats at the yard.  A new mezzanine loft for much-needed tool and equipment storage has been added to the steel building next to the Travelift bay. 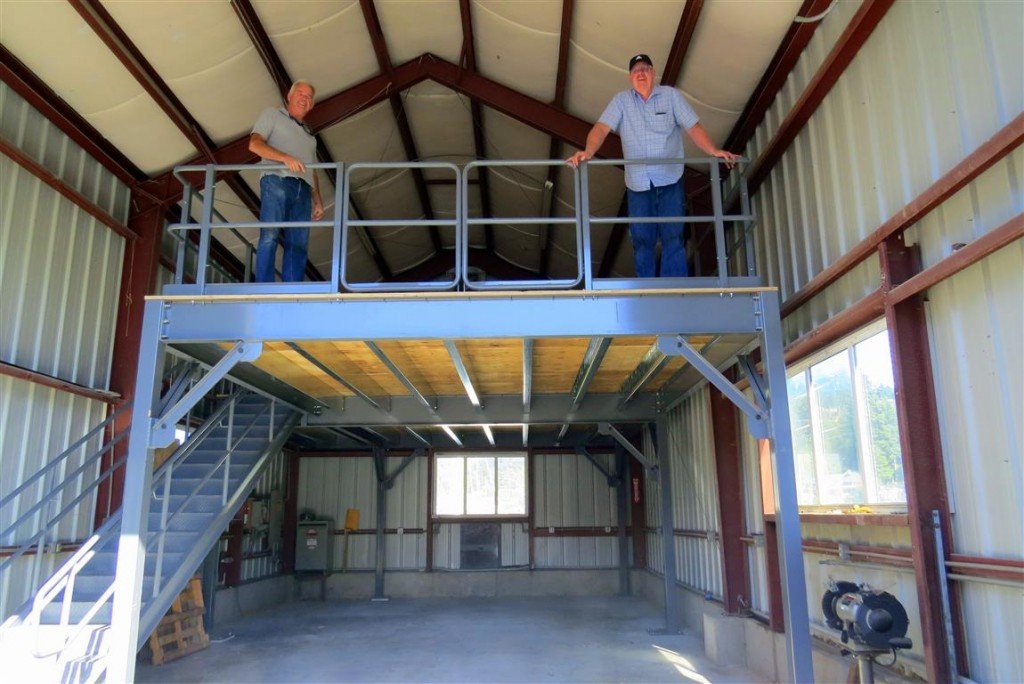 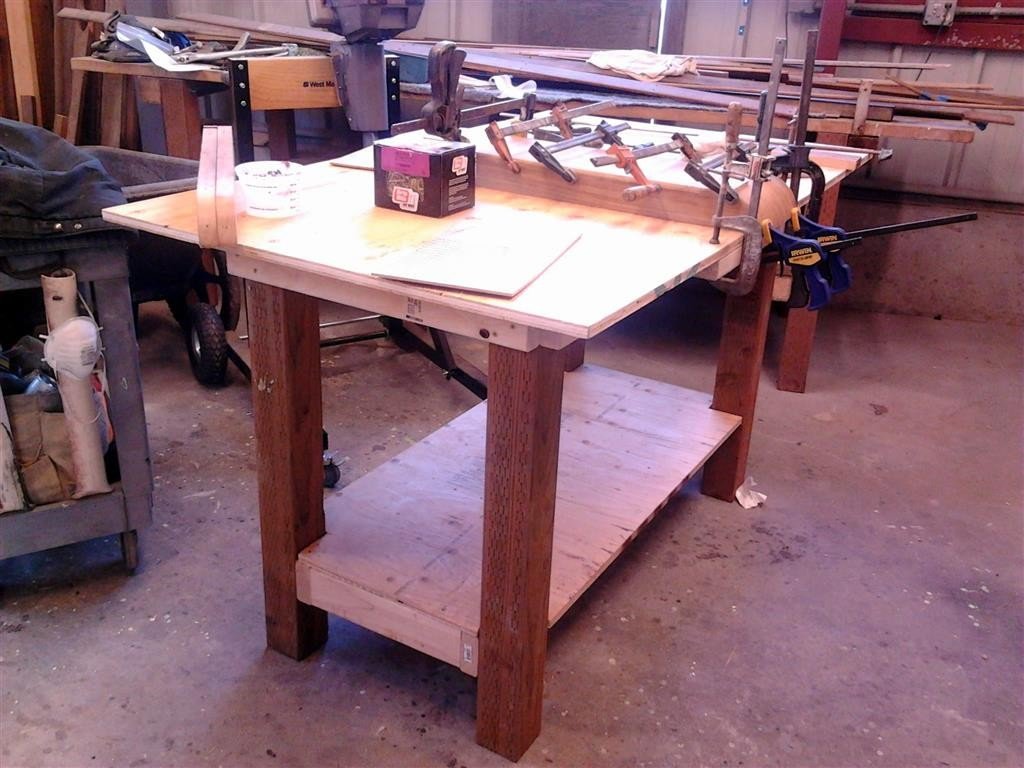 Eight new wooden work benches for shipwrights are going into the shop area under the mezzanine.

The added workshop and storage area fills a need that goes back to a January 2013 fire in a marina building occupied by Gig Harbor Yacht Sales, says Roark.  “We lost the building where the trolley now is,” he said. “The basement of that was a workshop and we lost some work area and space for the shipwrights.” 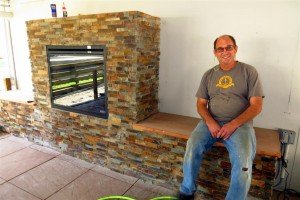 “It’s really a custom business,” added the marina and boatyard owner, where shipwrights, such as master carpenter Chris Wolle, left, need space to create the custom-built pieces installed for customers. Wolle is sitting next to the precisely cut hearth bench he made to fit perfectly around the irregular slate fireplace tile in The Club @ The Boatyard.

Gig Harbor Marina & Boatyard also recently installed a new Wi-Fi system to improve Internet access for tenants throughout the marina.  In addition, the marina has a new “watch dog,” said Roark, with the installation of a live web cam for “increased security for our tenants.”