Some boat names conjure up images of idyllic days on the water with something like Island Breeze or Sun Chaser. Others lean toward the sweet and sentimental with My Maria or Our Dream. And then there’s the just plain humorous, such as Abby Normal, which came to Gig Harbor Marina & Boatyard recently.

Even if you’re not familiar with Mel Brooks’ 1974 horror parody, “Young Frankenstein,” a boat by the name of Abby Normal is sure to make you chuckle.  It did me, and I just had to stop and take pictures of it when I saw it in the yard.  The Ranger 33 sailboat was at Gig Harbor Marina & Boatyard for some new through-hulls, sanding and bottom paint.

The Ranger 33 “needed a ton of work” when he bought her, says the owner 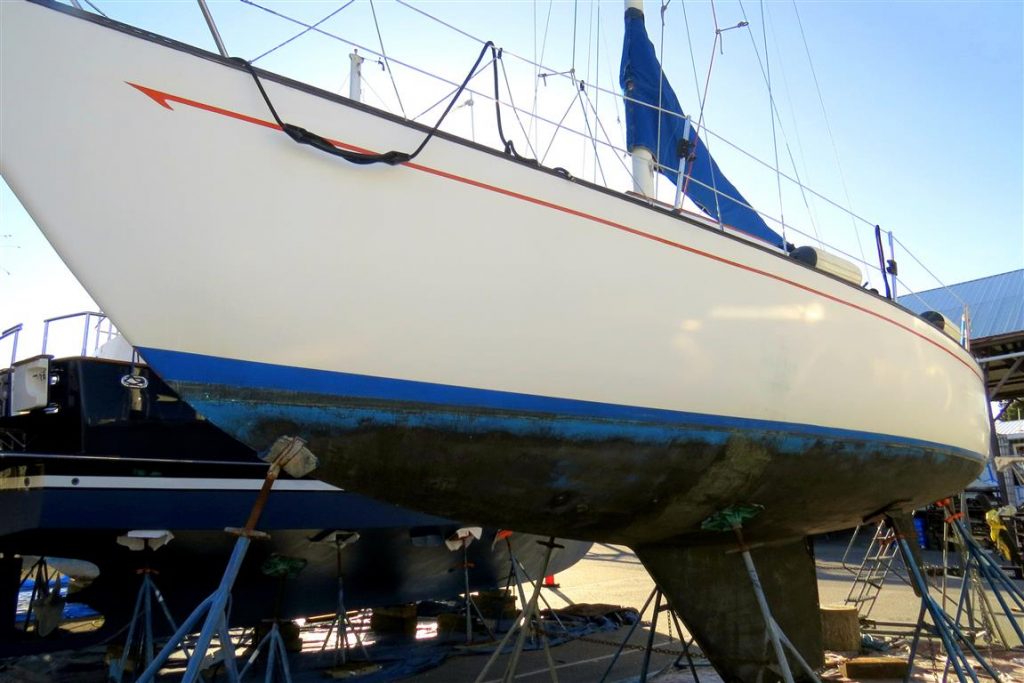 (In the movie, in case you don’t remember, Dr. “Fronkensteen” (Gene Wilder) tries his best to control his outrage when his hunchbacked assistant “Eye-gor” (Marty Feldman) brings him the wrong brain for the monster. He grabs one marked ‘Abnormal,’ which he tells the doctor was “Abby someone. Abby….Normal.”)

So there I was at the boatyard, snapping photos of this boat with the great name, when someone walked up. This just wouldn’t be the owner, would it, because then I’d have to explain why a complete stranger was playing paparazzi on his boat.

“Oh, hi, I’m Kerrie and I do blogs for the marina’s website,” I hastily explained when he, of course, turned out to be the owner, wearing a puzzled look. “I love the name of your boat so I just had to take pictures. That’s one of my favorite movies,” I burbled on, scrambling for credentials to show that I wasn’t some weird boat stalker. No worries, I should have realized. A person who names his boat Abby Normal has a pretty easy-going nature. 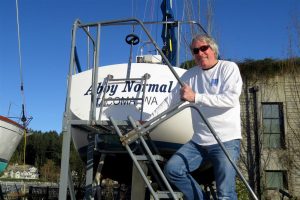 “Abby Normal’s” owner Gary Ford has brought his boat “back to life” through a lot of hard work.

Abby’s owner is Gary Ford, the manager of West Marine in Gig Harbor, and he was happy to talk about the “classic plastic” boat he has owned since 2010. The 1975 Ranger is a Gary Mull design, he said. It was originally designed around the IOR format, the International Offshore Rule for measurement in racing sailboats. “Then the builder had pressure on him to make it more of a cruiser,” he explained, as he climbed the ladder next to Abby Normal. 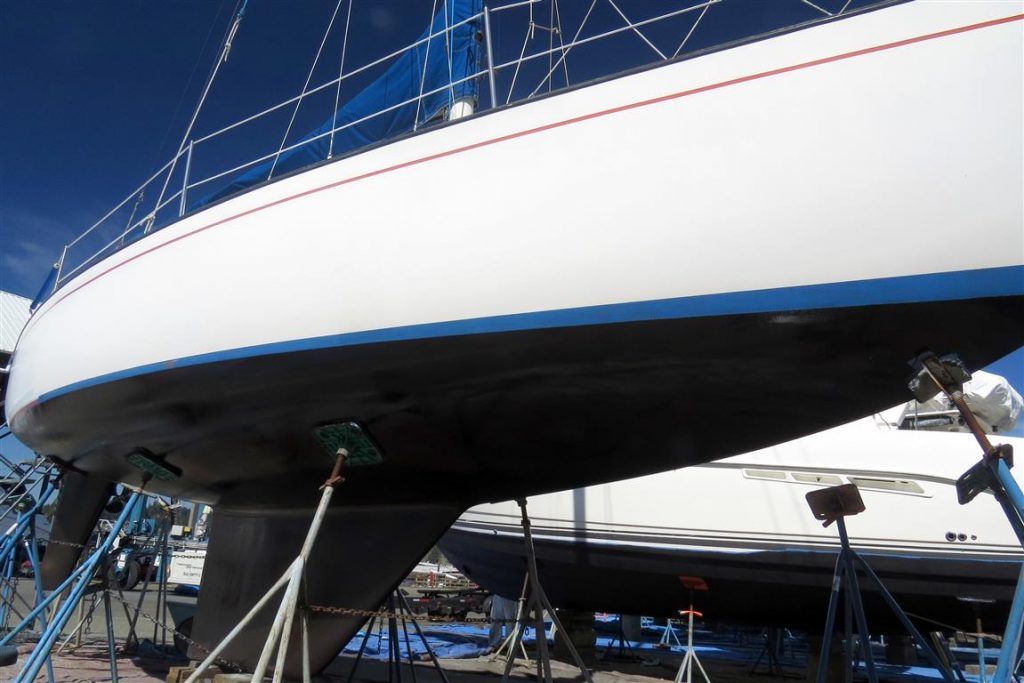 “Abby Normal” is ready for a season of cruising the South Sound with new through-hulls and bottom paint.

Ford, who lives in Tacoma and commutes over the Narrows Bridge to the marine store in Gig Harbor, first saw the Ranger on the hard in Anacortes. “She needed a ton of work,” he said, shaking his head.

But what about the most important question of all: How did you come up with her name? I couldn’t leave without asking that.

“We had driven like crazy up to Seattle to have sail work done,” said Ford, “and we got caught in a snowstorm.” So when the drive turned into a crawl he and his girlfriend, Sheri, got talking about what to name the boat. “Sheri said, ‘Abby Normal’ and we laughed and we knew that would be her name. We brought her back to life and she’s been great.” 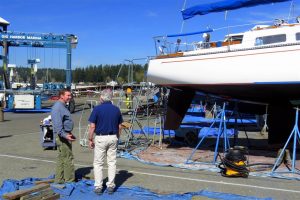 Ford, who mostly cruises Abby Normal in the South Sound, has been a regular customer at Gig Harbor Marina & Boatyard the last few years.

“Gary has entrusted us to sand and do (the Ranger’s) bottom paint for the last three seasons,” said Mark Lindeman, boatyard manager at Gig Harbor Marina & Boatyard. Once the work on her through-hull replacement and bottom paint was done, Abby Normal was ready to cruise the Sound again.