Kiya, a Thunderbird 26, whose birthplace was the Eddon Boatyard in Gig Harbor in 1958, was on the hard for some finishing touches before the 40th annual Wooden Boat Festival in Port Townsend, Sept. 9-11. Gig Harbor Marina & Boatyard did minor keel and paint repairs on the classic Thunderbird, which is about hull No. 11 or 12, said Boatyard Manager Mark Lindeman.

Some time back, Kiya was donated to the Gig Harbor BoatShop, on the site of the former Eddon Boatyard. Robert Jendry of Gig Harbor bought the Thunderbird and worked with the BoatShop to completely renovate her to original specifications, Lindeman said.

“We’re doing minor paint and keel repairs and giving her a race finish,” said Lindeman, himself a former owner of a Thunderbird and a sailboat racer.

He went on to explain the history of the fiberglassed-plywood Thunderbird and its roots in Gig Harbor.

The Thunderbird class sailboat was designed in 1958 by Seattle naval architect Ben Seaborn, in response to a contest challenge by the Douglas Fir Plywood Association of Tacoma, Lindeman said.

“The contest was for a design so people could build their own boat from a set of plans,” said Lindeman. “Seaborn won the contest and Eddon Boatyard built the first boat.” 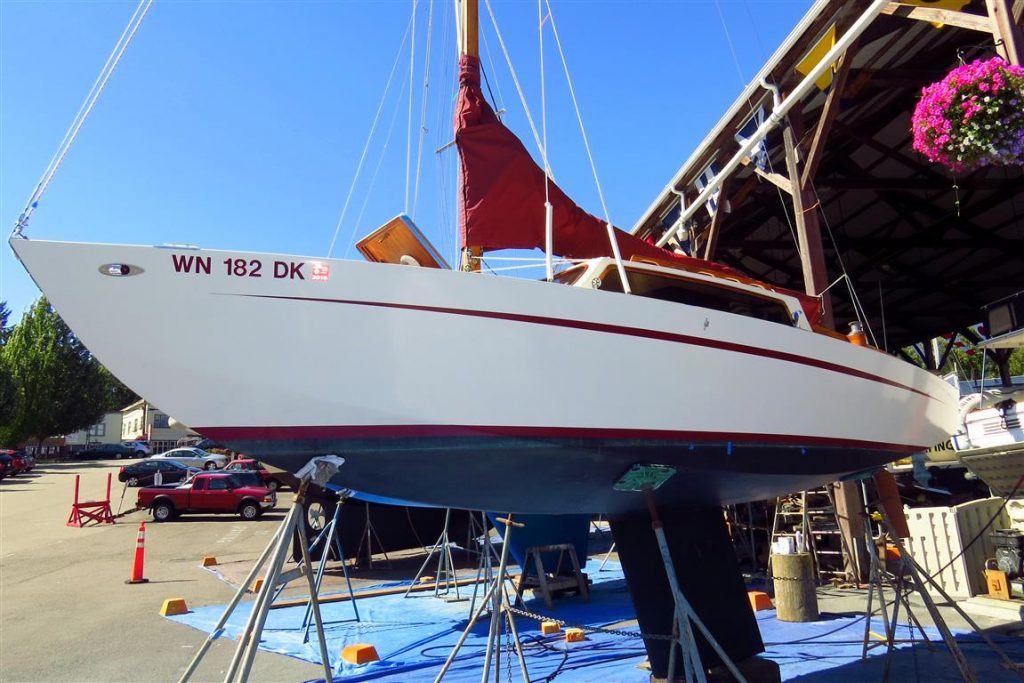 “Kiya,” a Thunderbird 26 built around 1958, came to Gig Harbor Marina & Boatyard for keel repairs and race-finish paint before the Wooden Boat Festival in Port Townsend.

According to a Thunderbird website, the contest called for design proposals for a sailboat that would be both a racing and cruising boat; provide sleeping accommodations for four crew; be capable of being built by reasonably skilled amateurs; provide auxiliary power by an outboard motor that could be easily removed and stowed, and out-perform other sailboats in its class.

“More than 57 years of experience and construction of more than 1,250 Thunderbirds around the world have demonstrated that the 25-foot 9-inch Thunderbird class sailboat is a success on all accounts,” said the website.

After her recent renovation and then final touches at Gig Harbor Marina & Boatyard, Kiya is ready to impress at the Wooden Boat Festival.