“We’ve always owned the Trolley and now we get to open it year-round ourselves, with no more seasonal closures,” said boatyard Hospitality Manager Danielle Taylor.

The Trolley @ the Boatyard will be open summer and winter seasons for walk-up and delivery service of its fantastic Northwest fare under the boatyard’s husband and wife management team, Omar and Camber Morales.

Omar Morales, half of the new husband and wife trolley management team at Gig Harbor Marina & Boatyard, gets ready to open the Trolley @ the Boatyard for the day.

The two talented food maestros have already been working their mouth-watering cuisine magic this winter with the boatyard’s off-season operation of the Trolley since October.

JW managed the trolley during the last two summers since the food truck opened in April 2016. It is a relationship that Danielle values and appreciates.

“I want to thank JW,” she said. “It was a great partnership over the past couple of years and it was great working with manager Jamie Lindsey and crew. You can still find them at their wonderful JW restaurant.”

Now Danielle is looking forward to the next course on her plate. She and the Morales team plan to work with local food purveyors in bringing a fresh “farm to table” Northwest fare to the Trolley @ the Boatyard.

“I’m so excited to deliver seasonal Northwest menu items to the community, and now to your doorstep at home or work with our delivery service,” she added at a planning meeting this week with Omar and Camber. “We are working with local bakeries, fish mongers and farms to bring all-local farm to table fare.”

The trolley management team is planning a menu that will be more seasonal than it has been, said Omar. It will change twice a year with a summer season menu offered 9 a.m. to 8 p.m. from April 1 through Oct. 31, and a winter menu 9 a.m. to 5 p.m. from Nov. 1 to March 31.

“We are extremely excited about running the Trolley,” said Omar. “We can’t thank Danielle and Ron (Roark, general manager of Gig Harbor Marina & Boatyard) enough for giving us this chance and we are so grateful.”

A couple of new menu items to look forward to on the upcoming summer menu: “Our take on an East Coast favorite, we’re going to offer a Pacific Northwest crab roll,” said Danielle.

The Trolley @ the Boatyard will also serve up delectable Gig Chips & Gertie Dip — homemade seasoned potato chips with a sour cream, mayo, mustard and bacon bit-based dip made with Gig Harbor Brewing Company’s Sturdy Gertie Double IPA beer. (You have heard that Gig Harbor Brewing Co. is soon to be the boatyard’s new neighbor, right? Ingredients don’t get any more local than that!)

The Trolley will continue to offer breakfast and its “Captain’s Plate” daily special, which has proven to be very popular this winter.

“People are coming up and asking, ‘What’s on special today because that was amazing yesterday,’ said Camber. 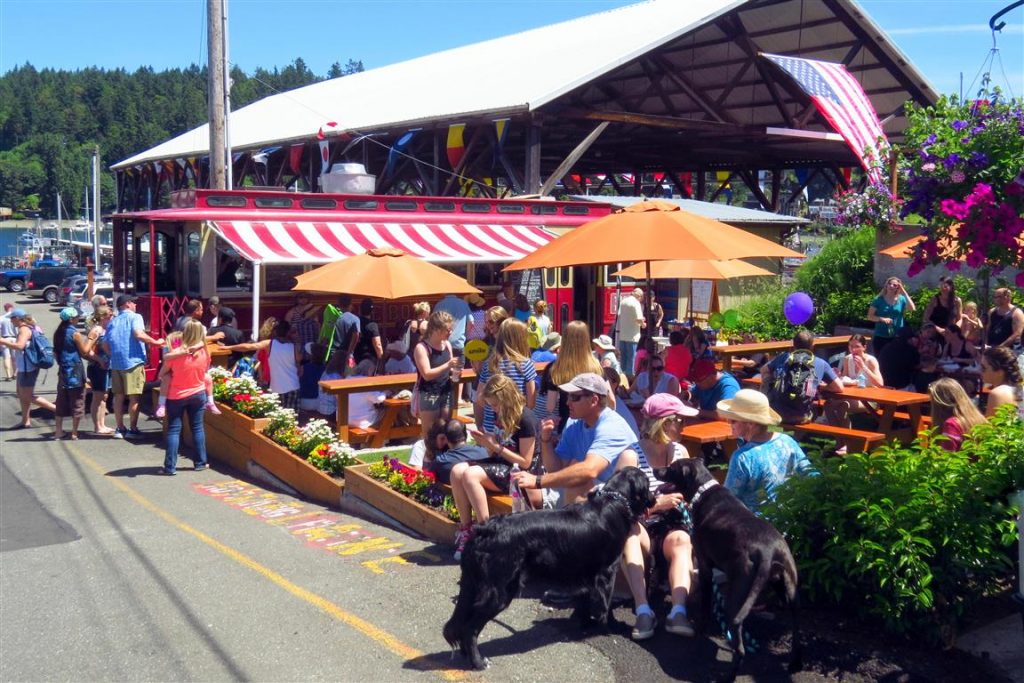 The Trolley @ the Boatyard will now be operated by Gig Harbor Marina & Boatyard, offering delicious farm to table fare year-round.

The Trolley @ the Boatyard will keep up its delivery service, which the team feels will be a big hit with boaters in the summer.

“Boaters in neighboring marinas will love this,” said Camber. “We’ll deliver right to dock gates, so give us a call.”

“Whether you’re walking through downtown or coming by boat, the Trolley @ the Boatyard is now going to be offering this great Northwest fare year-round,” said Danielle.