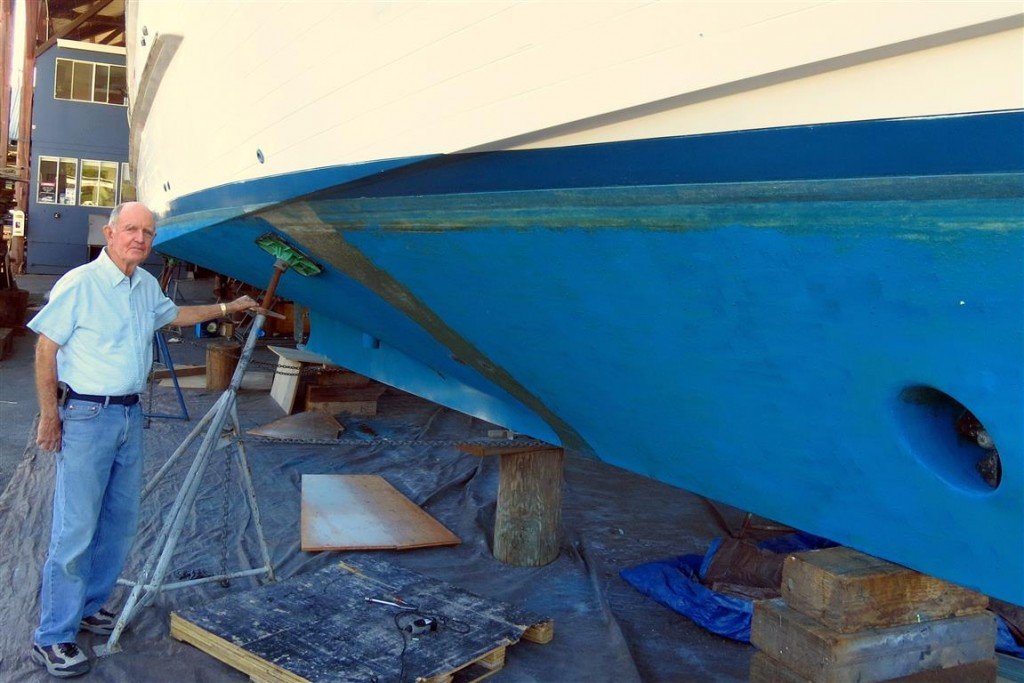 Summer cruising is full of adventure on new water and new places to see, delightfully far from home. But out of the blue, it can turn into a misadventure and you suddenly find yourself disturbingly far from home. 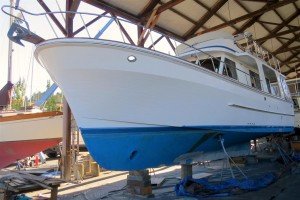 When that happens, Gig Harbor Marina & Boatyard is your next port of call for top-notch marine service and repair. That was the case for Gig Harbor residents Bob and Linda Kimbrough when their summer cruise in British Columbia ended with the sound of shells crunching under their hull — in deep water, at high tide. Their Ponderosa 42 hit a submerged shipping container.

The Kimbroughs were near Port McNeill, almost to the northern tip of Vancouver Island, when their boat Ka De Lin ran over the container and tore up her bottom. They were able to make the long trip back home, and the Ponderosa is now in the capable hands of the boatyard crew at Gig Harbor Marina & Boatyard for repairs to her damaged bottom and prop. 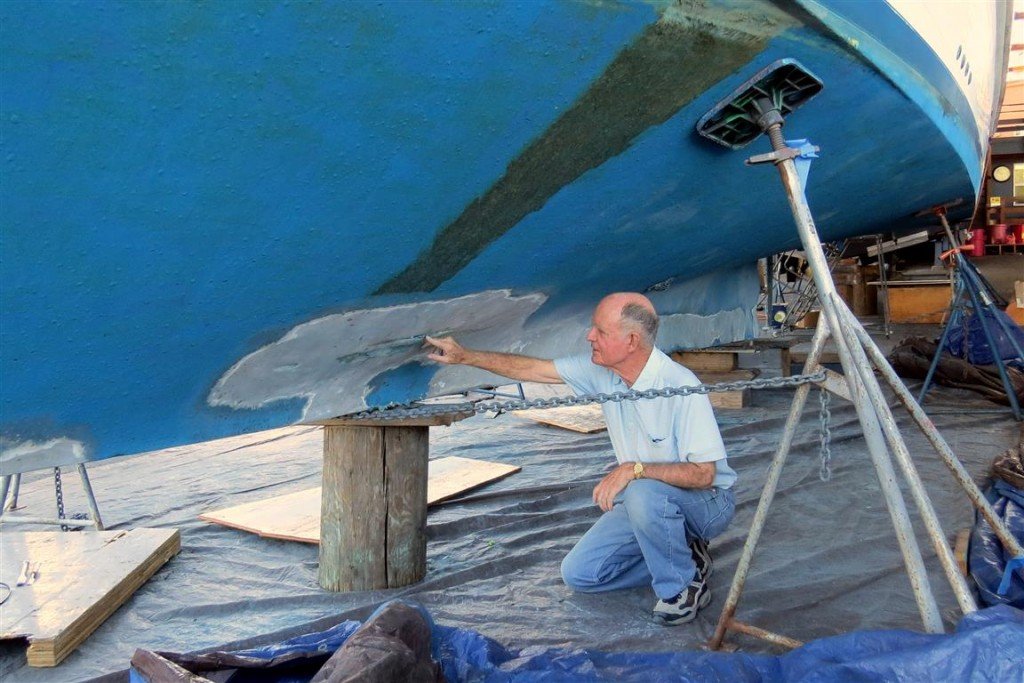 “It’s not as bad as it could be,” said Kimbrough as he calmly surveyed the gash in Ka De Lin’s fiberglass hull after she was hauled out by the Travelift at Gig Harbor Marina & Boatyard. “They’ll do a good job here at the boatyard.” 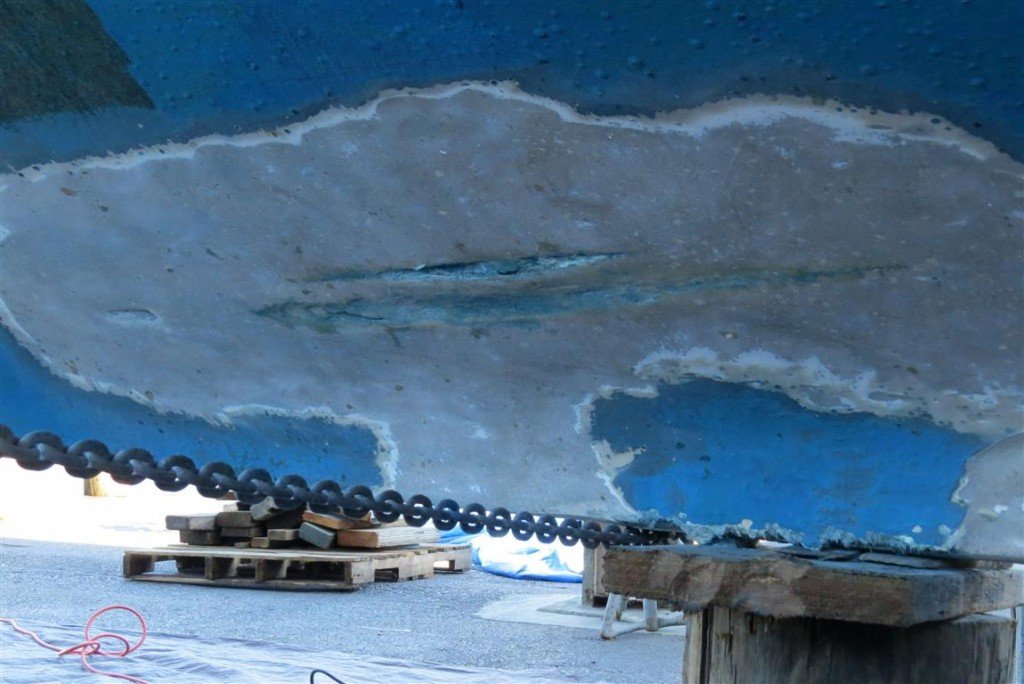 The Kimbroughs were cruising at about eight knots on their way to Port McNeill on the northeast shore of Queen Charlotte Strait when their 40,000-pound Ponderosa sedan ran over the container. It was completely submerged about three feet below the surface.

“It was like a plane taking off,” Kimbrough said. “We just rode up on it and didn’t hit until about eight feet (of container length was left) from the bow. There wasn’t a bang or a clunk or anything. I could hear us crushing the mussels and barnacles (on the container). It had been in the water a long time.”

Some divers from a fish farm were nearby, repairing a net on their boat, and they offered to check out the damage to Ka De Lin.

“They looked at it and said, ‘you can get home,'” Kimbrough said. “They said it was a container and asked ‘where was this?’  I told them and they went out and looked for it.

Now his 1985 boat, which was custom-built by the first owner, is safely back in her home port for hull and prop repairs at Gig Harbor Marina & Boatyard.  The experienced shipwrights at the boatyard will cut the fiberglass back to where it’s clean, undamaged and dry, and then apply layers of heavy fiberglass after they fill the holes, said Kimbrough who has owned the boat since 1991. 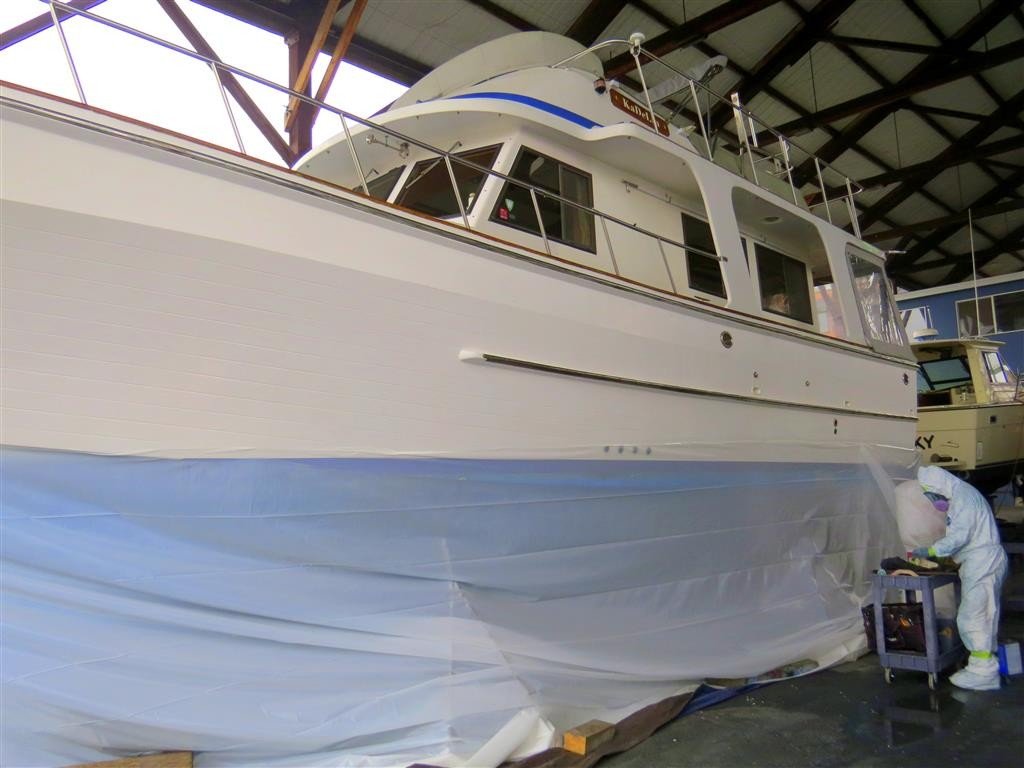 Doug, a shipwright at Gig Harbor Marina & Boatyard, came out of the tented area under Ka De Lin and paused in his work grinding her hull to elaborate on the repair job. 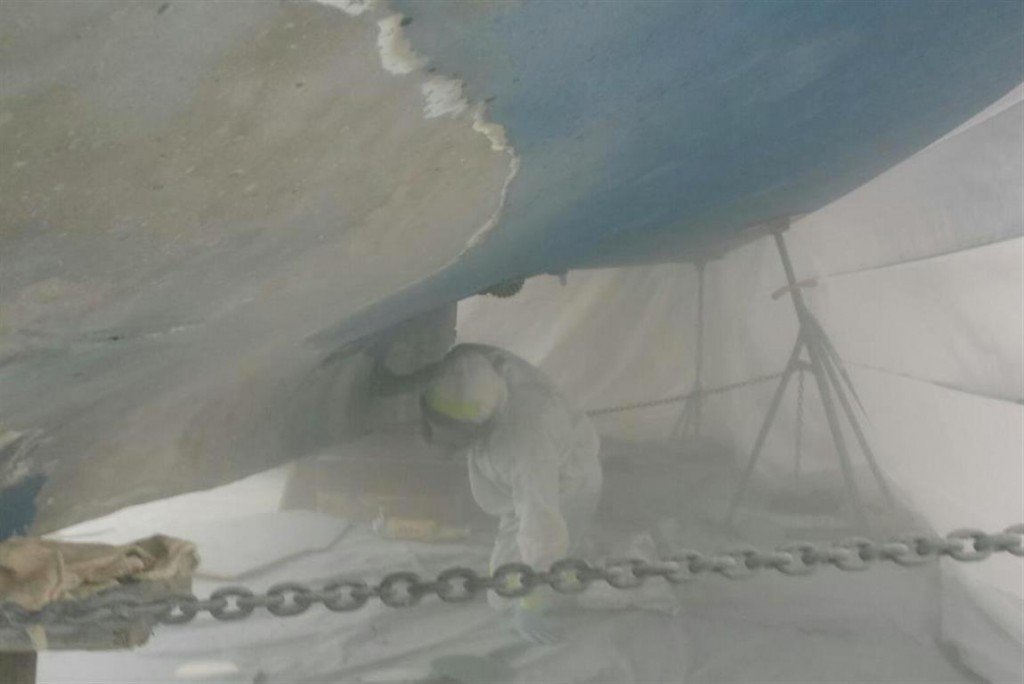 “We are grinding the de-laminated fiberglass to eliminate the damaged material,” he said, wearing a protective suit and holding his respirator. “We will end up putting about 15 layers of fiberglass on the hull.”

Kimbrough said when his boat slid off the container it damaged the prop, but the Ponderosa’s heavy keel protected the rudder.

“If this had happened to a boat with twin engines it probably would have sunk it,” said Kimbrough, a past commodore of the Gig Harbor Yacht Club who has been a boater his whole life.

When Ka De Lin is set back in the water by the Travelift at Gig Harbor Marina & Boatyard, she’ll have a smooth, new re-fiberglassed hull, a repaired prop and fresh stripe and bottom paint. 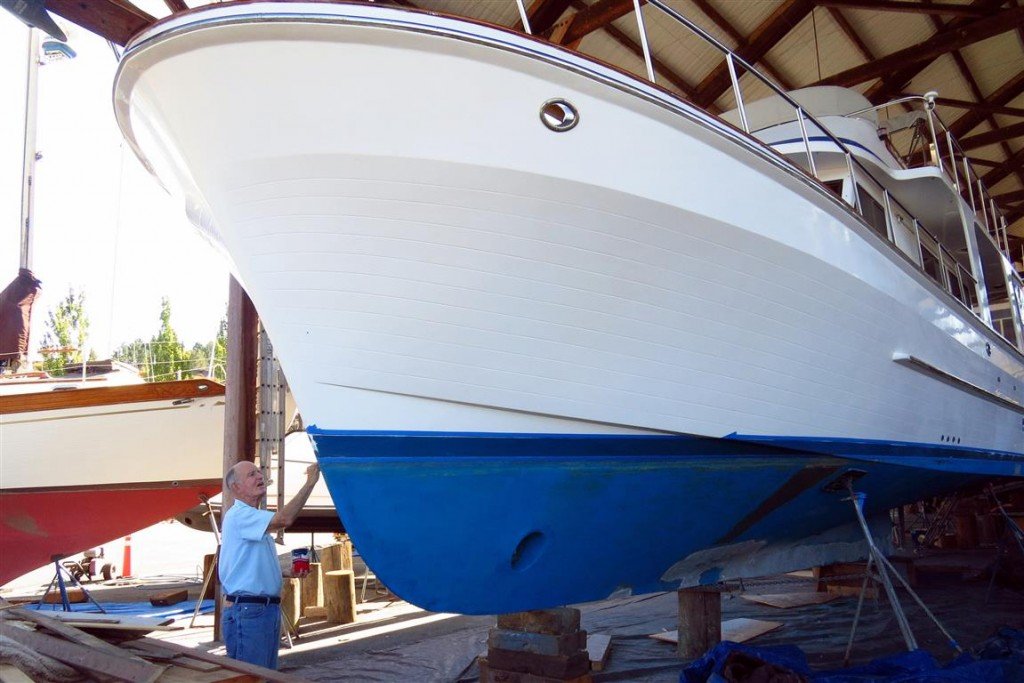 “They say there are 5,000 to 15,000 containers lost overboard a year world-wide,” said Kimbrough. “We all know about containers and to watch out for containers.”  But it happens, he added.

When it does, put the misadventure behind you with experienced service and repair at Gig Harbor Marina & Boatyard.