Gig Harbor’s downtown area has all the right touches for charm along the historic waterfront:  Skansie Brothers Park right on the harbor, venerable old net sheds and museums, locally-owned bookstores and fascinating art galleries, boutiques of beautiful wares and many delicious choices in eateries. 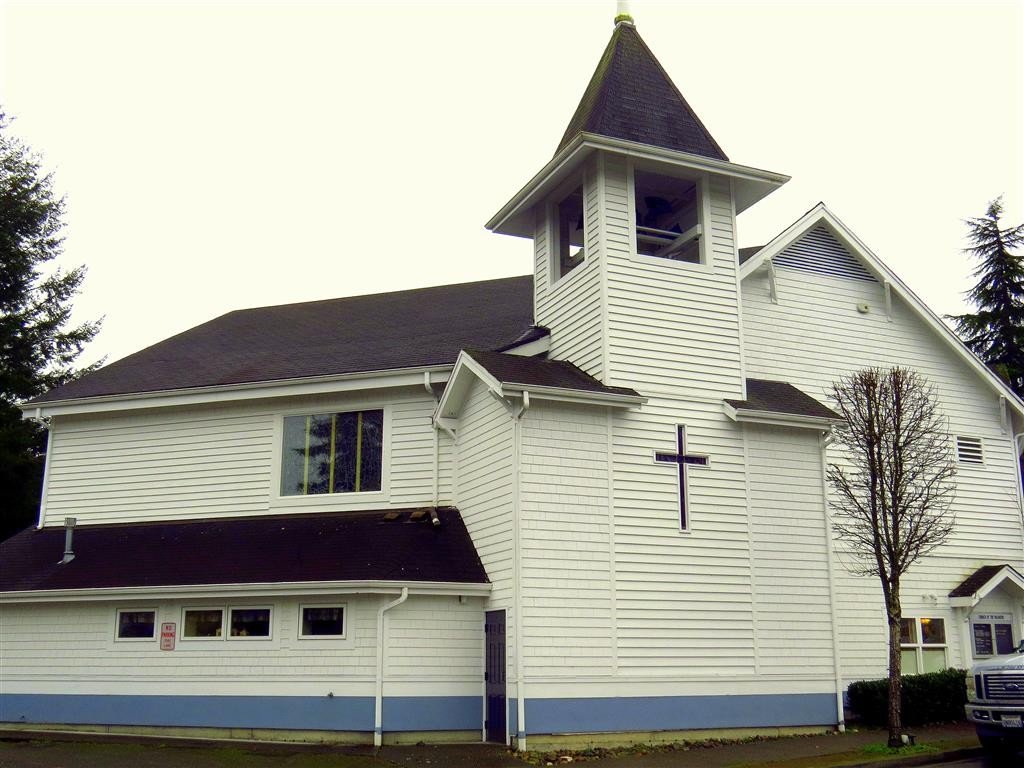 The historic Gig Harbor Church of the Nazarene was dedicated in 1913 as a Presbyterian church. The land on Pioneer way was donated by the Gustafson family.

And for the last several months, tolling church bells have added the perfect tone to what makes downtown Gig Harbor a special place. The bells ring from the tower of the historic Church of the Nazarene on Pioneer Way and the melodic tolling wafts through the waterfront area like a soft, comfortable breeze several times a day.

The bells in this landmark church that dates back to the early 1900s were silent for 15 years, a victim of New Year’s Day 2000 and out-dated technology, says lead pastor Keegan Lenker of the Gig Harbor Church of the Nazarene.

“At Y2K the bells were turned off because the electronic system didn’t work, it couldn’t make the conversion” to the new century, said Lenker, who has been pastor at the church for 10 months.  So a few months into his new position a member of his church approached him with a plan.

“He said, ‘would you like the bells to work again?’ Well of course I did so he reprogrammed the system — named Quasimodo, by the way — to a year when it would work.” said Lenker.

The tech-savvy congregant chose the year 1916 and Quasimodo by Belltron has tolled from the bell tower every afternoon for the past six or seven months. The bells toll on the hour from noon until 6 p.m. Monday through Friday, from 1 to 6 p.m. on the hour on Saturdays, and 10 minutes before the church’s two Sunday worship services, which are at 8:30 and 10:45 a.m. 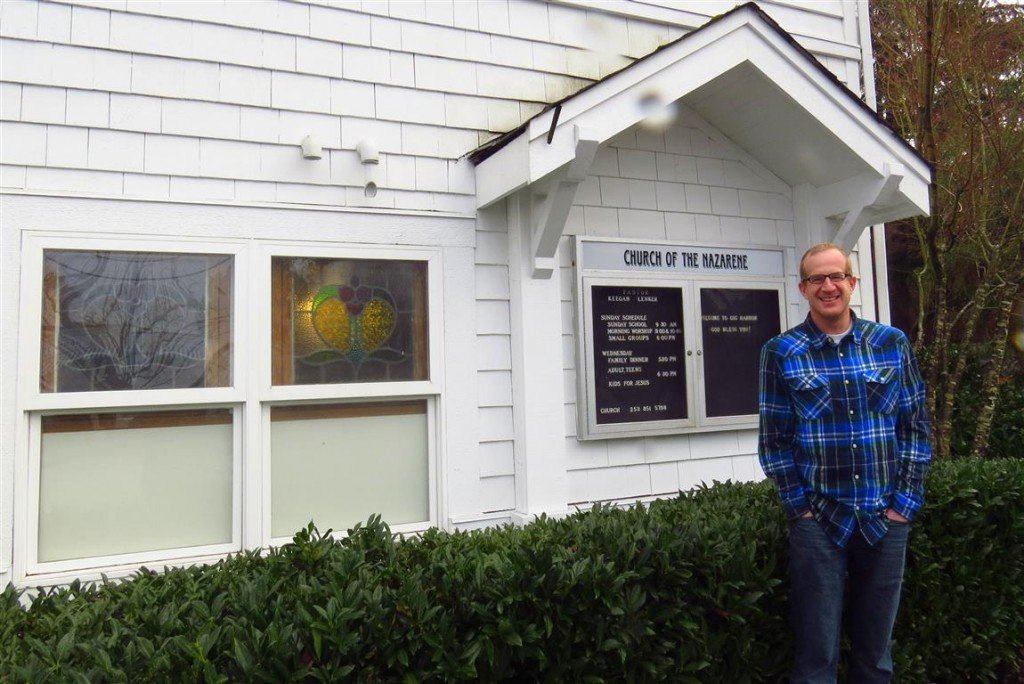 Pastor Keegan Lenker stands outside the Gig Harbor Church of the Nazarene. The church has undergone many rounds of remodeling in its 103-year history.

“We’re a unique entity in downtown,” said Keegan, who moved to Gig Harbor last spring from Pasadena, Calif., where he was associate pastor of a church of 1,700 members. “We didn’t know it was a lost treasure that we were missing.”

Keegan says people leave business cards on the church doorstep with notes written on them, thanking the church for restoring the bells to downtown Gig Harbor.

Employees at Gig Harbor Marina & Boatyard especially appreciate the flavor the tolling bells add to the harbor.  When office staff walk from the marina to the post office they enjoy passing under the tolling bell tower for “a unique piece of small-town feel that Gig Harbor’s waterfront has to offer,” said one employee in an email about the bells.

The white shake-sided church, just half a block from Gig Harbor Marina & Boatyard, was dedicated as a Presbyterian church in 1913. It has been owned by many congregations over the years and has been extensively remodeled over the past 100 years. Today it’s home to more than 200 members of the Church of the Nazarene, who are happy to be part of what makes Gig Harbor special, said Pastor Keegan as he enjoyed an omelette lunch at Kelly’s Cafe and Espresso across the street. 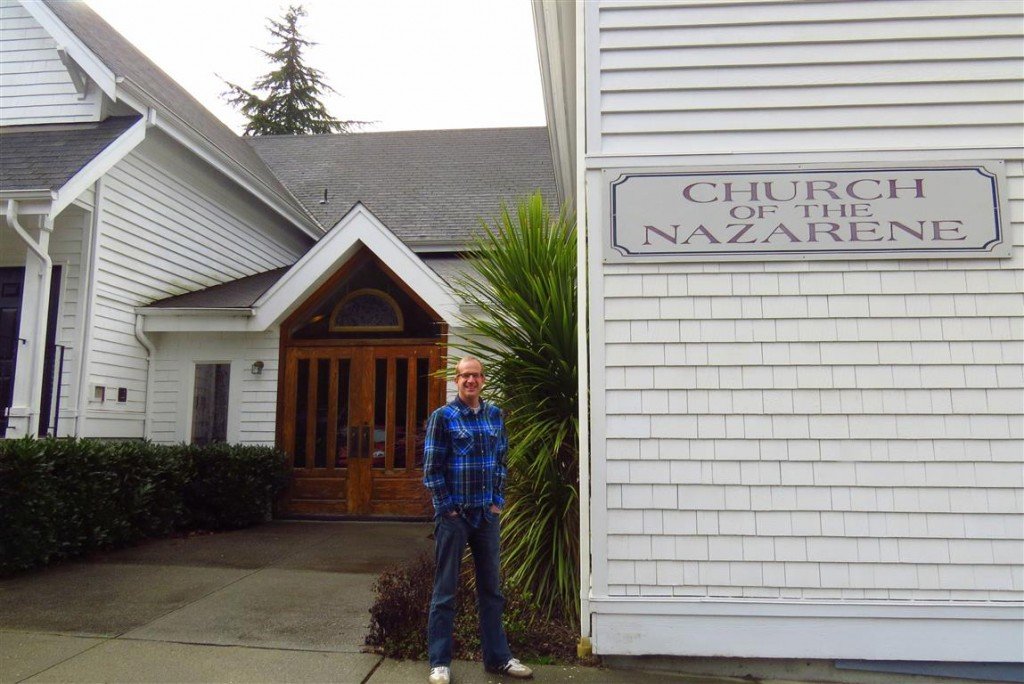 “I like to ask what it means to be a good neighbor,” he said. “We love this community. We had 10 volunteers help with the Gig Fest last year; we had Trunk or Treat in our basement for Halloween, and we just renewed our membership with the Chamber of Commerce.”

The tolling bells may just help people become more aware of the historic church that has been in the heart of downtown Gig Harbor for over 100 years.

“We’ve had people think we are a museum or offer to buy the building to turn it into a restaurant,” the pastor said laughing. “Others don’t always know where we are until I say ‘across from Kelly’s.'” 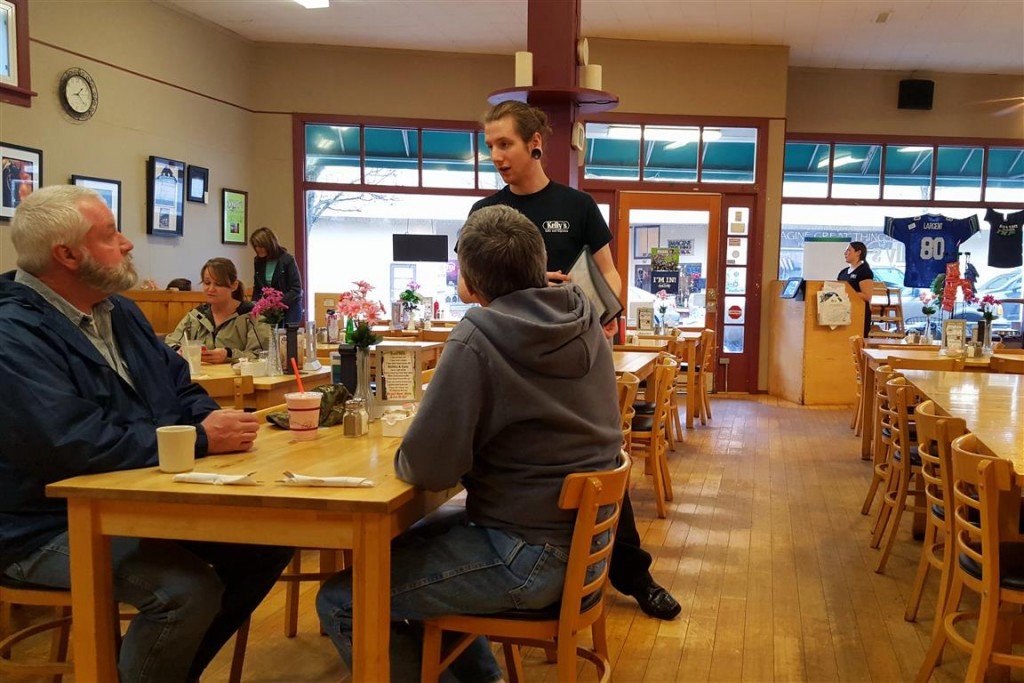 Patrons place an order for lunch at Kelly’s Cafe and Espresso across Pioneer Way from the historic Gig Harbor Church of the Nazarene.

So, the next time you’re visiting Gig Harbor Marina & Boatyard , or are in downtown Gig Harbor for any reason, stop by Kelly’s Cafe and Espresso. Have a bite to eat and enjoy the tolling church bells adding even more charm to an already special community.