Destiny Harbor Tours boat, Maritime, made a stop at Gig Harbor Marina & Boatyard recently for a little pre-season spruce-up. The U.S. Navy vessel-turned-tour boat was on the yard for rub rail repair and repainting ahead of sightseeing season.

The crew at Gig Harbor Marina & Boatyard used a waterproof epoxy filler on Maritime’s rub rails, then sanded and repainted them, said Mark Lindeman, manager at the downtown Gig Harbor boatyard. Travelift operator Mark Rybin set the popular tour boat back in the water this past Monday and Captain Tom Drohan drove her back to her slip at the end of the harbor.

Maritime won’t have long to wait for her next round of action. Destiny Harbor Tours, operating out of Gig Harbor and Tacoma, starts its tour season in June and runs through September.

Capt. Drohan started Destiny Harbor Tours in 2007 “to give people of all ages a chance to have the Puget Sound experience up close and personal, for a very reasonable price,” he says on his website.  He operates two authentic, restored U.S. Navy boats that are U.S. Coast Guard certified for up to 33 passengers each. The boats Destiny and Maritime are named for Tacoma, “The City of Destiny,” and Maritime for Gig Harbor, “The Maritime City.” 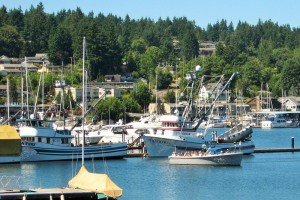 The scheduled tour from Gig Harbor sails daily at 3:30 p.m. and originates from the sidewalk in front of Anthony’s Restaurant on North Harborview Drive. The two-hour tour takes passengers through Gig Harbor to the Tacoma Narrows Bridges, Salmon Beach and Point Defiance before returning to the harbor. The adventure includes sights of bald eagles, seals, Mount Rainier, the Olympic Mountains and “the wonder of racing tides and the splendor and history of Puget Sound,” says the website. 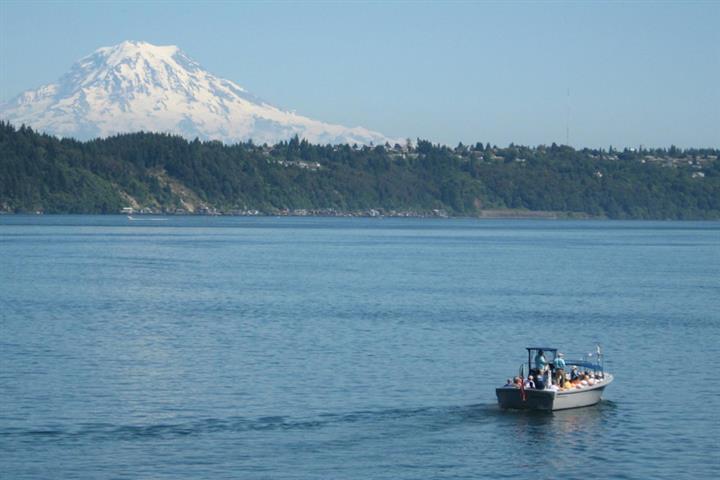 Check out Destiny Harbor Tours to learn about their Eco Tours, charters, memorials at sea and special event offerings. For reservations, availability and latest information call 253-225-6306 ~ and don’t forget your camera.

Hmm, float this idea past the social planner in your life: Consider chartering a Destiny Harbor Tour with 32 of your closest friends and family and then coming back to The Club @ The Boatyard for a special evening with dinner and live music. What a perfect pairing for a graduation party, a birthday or an anniversary party, a reunion or a wedding party event.  Get the wheels turning on that idea and contact Danielle Taylor, hospitality manager at Gig Harbor Marina & Boatyard at dtaylor@gigharbormarina.com; 253-358-6546.