Team Organizer Sharon Shaffer recaps a year of successes and growth of the fiery-hot Gig Harbor Dragons-PenMet Parks paddlers in an email to me earlier this month:

Hi Kerrie. Sorry for the delay in getting back to you — as always, lots of stories and updates.

We had our Christmas Party (in early December) at the PenMet Pavilion at Sehmel Park. It was wonderful and will send some pics, although my photography is lacking. We gave one trophy:  to our volunteer, full-time, devoted coach, Al Abbott.  We owe so much to him. He has dedicated himself to training with other regional coaches and paddling with other regional teams — to bring excellence to us.  He never misses a practice, and that’s five times a week, and the regimens he puts us through are rigorous. 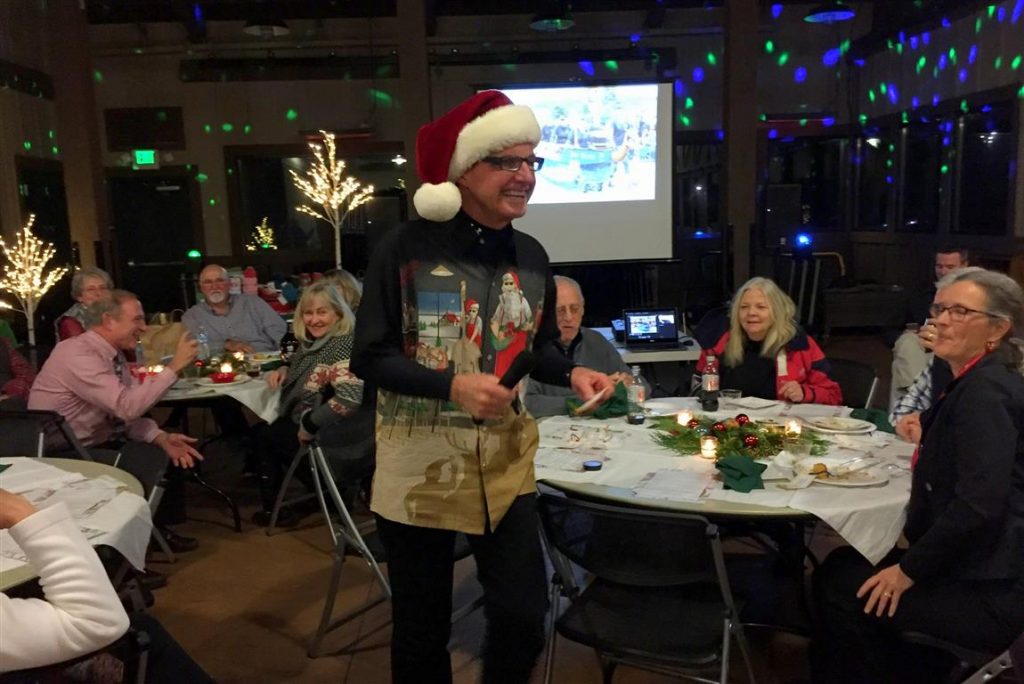 Kurt Grimmer, an original member of the Gig Harbor Dragons, takes his turn with the Truth Game at the dragon boat teams’s Christmas party earlier this month. The game is a fun mixer where participants try to guess who submitted a “truth” about him/herself, explains Sharon Shaffer.

Beyond the trophy for Al, we had so many of our crew members who deserved recognition that we put up an Appreciation Board, and on it, we all noted the service and leadership that our many crew members have shared.

We loved having Ron (Roark, general manager of Gig Harbor Marina & Boatyard and his wife) Jui Ling join us, and we thanked Ron for his continued gracious support AND for helping to purchase a second Dragon Boat for us, along with PenMet Parks and PAA (Peninsula Athletic Association).  We appreciate Ron and PenMet Parks so very much! 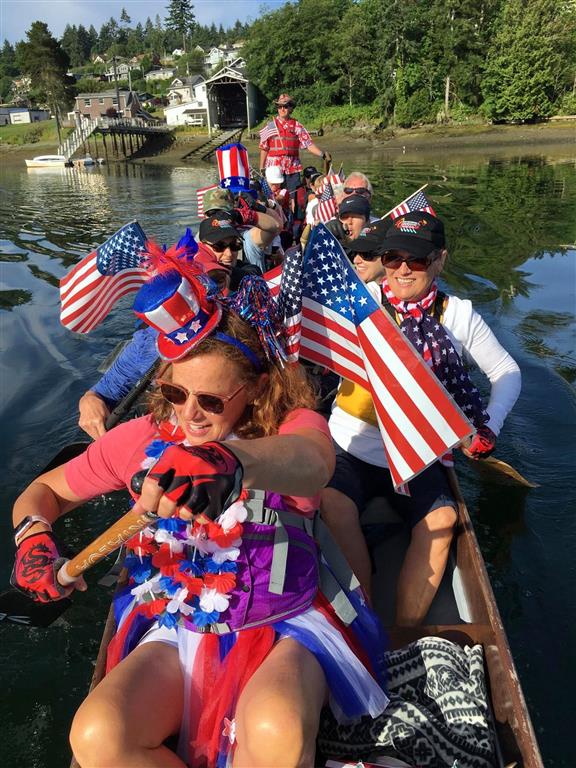 We also thanked a crew member, Jen O’Hare, for purchasing a second new 10-man boat that we will be using starting this spring. Both new boats will be moored at Ron’s marina.

Beyond that evening program, we enjoyed pot-luck yummy food, a door prize “give away” of gifts donated by local merchants, a Truth Game that we play annually, great music and light shows, and dear camaraderie. 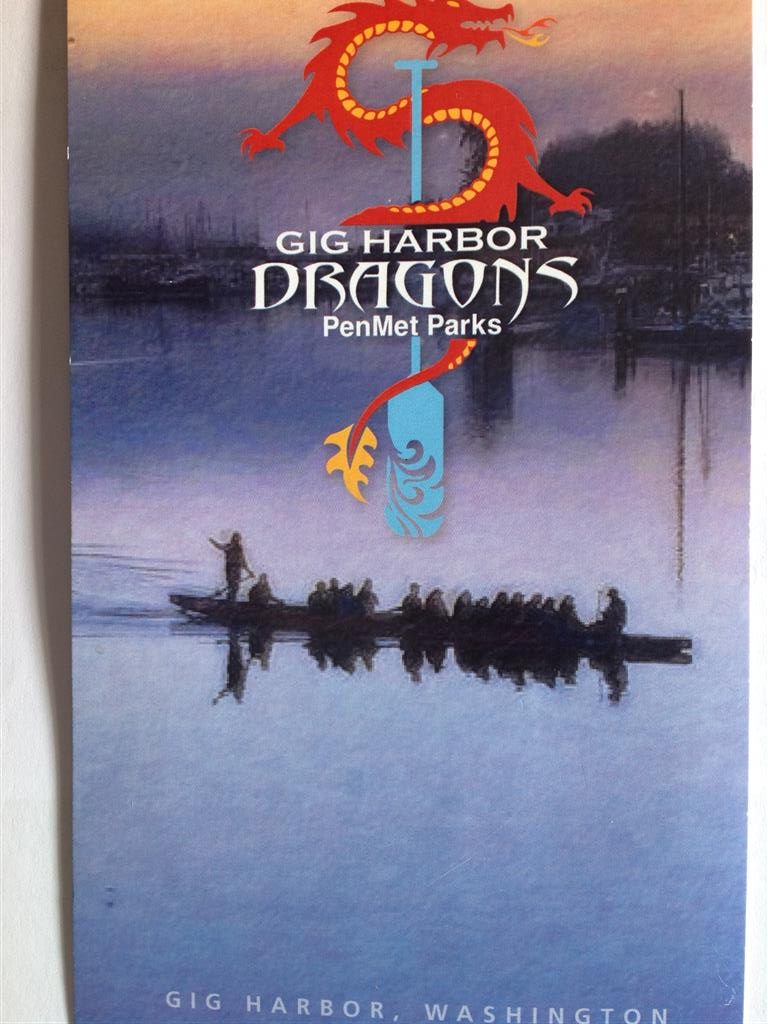 Our season is continuous, yet some of our members choose to paddle only in certain seasons. So, yes, we paddle in the winter, although our bottom temperature barrier is 38 degrees, so a few practices lately have been cancelled due to temps. I’ll send a picture of our Christmas Eve paddle from 2016. We (had) another Christmas Eve paddle this year on Dec. 23 at 8 a.m.

We have full-year memberships and seasonal team memberships available through PenMet Parks. This year we had 75 registrations — compared to 36 last year!  That’s good growth and clearly the reason that many of our summer and fall practices were so full. We had waiting lists for many of them.  We are thrilled to have two new 10-man boats available this spring so we can get everyone on board at each practice.

We now offer three competitive groups:  Our original Mixed Crew of guys and girls; a new Women’s Crew, and a new Youth Team of high schoolers. We are all on the same team, but we can now compete in varied races designated specifically. It gives us more flexibility.

This year, because of our successes last year, we got moved up to a higher level of competition. We have goals for sure. We earned one bronze medal this year in a Mixed Crew race in Tacoma. We competed at Olympia, Tacoma and in Kent on Lake Meridian. We planned to compete at Flathead Lake in Montana in September, but the race was cancelled due to wildfires and poor air quality. We are going there next September!!

We won some local awards this year. The Gig Harbor Downtown Waterfront Alliance presented the Dragons with the 2016 Harbor Master Award for engaging community with water sports downtown. We also won the PenMet Parks Summer photo contest with our Fourth of July Paddle picture. 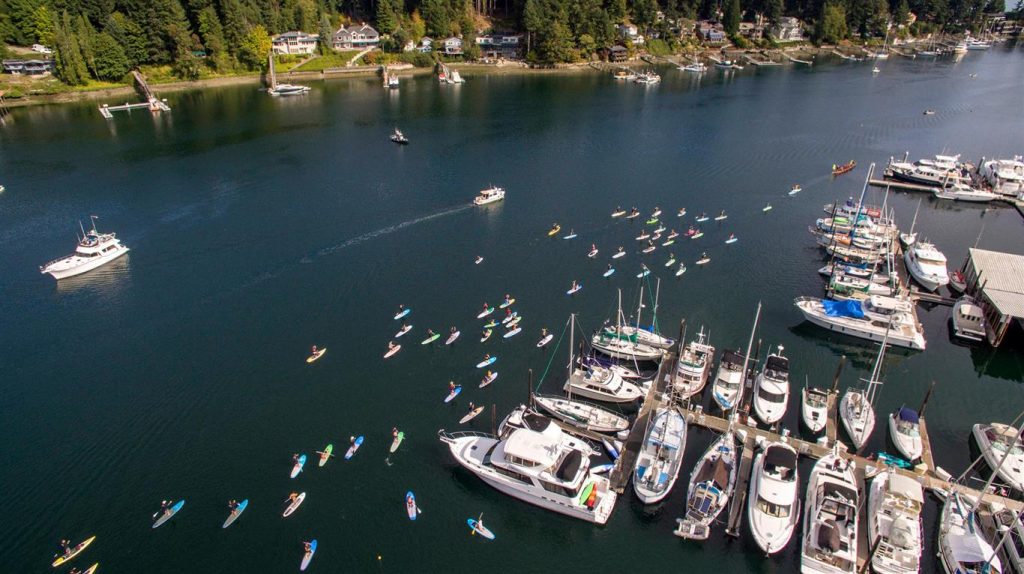 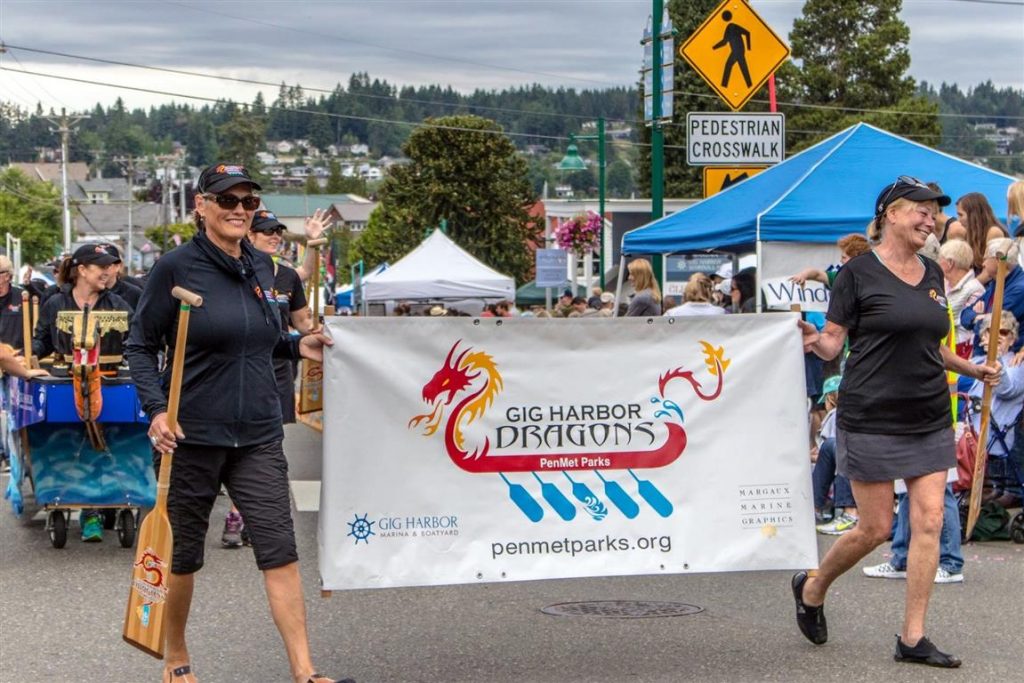 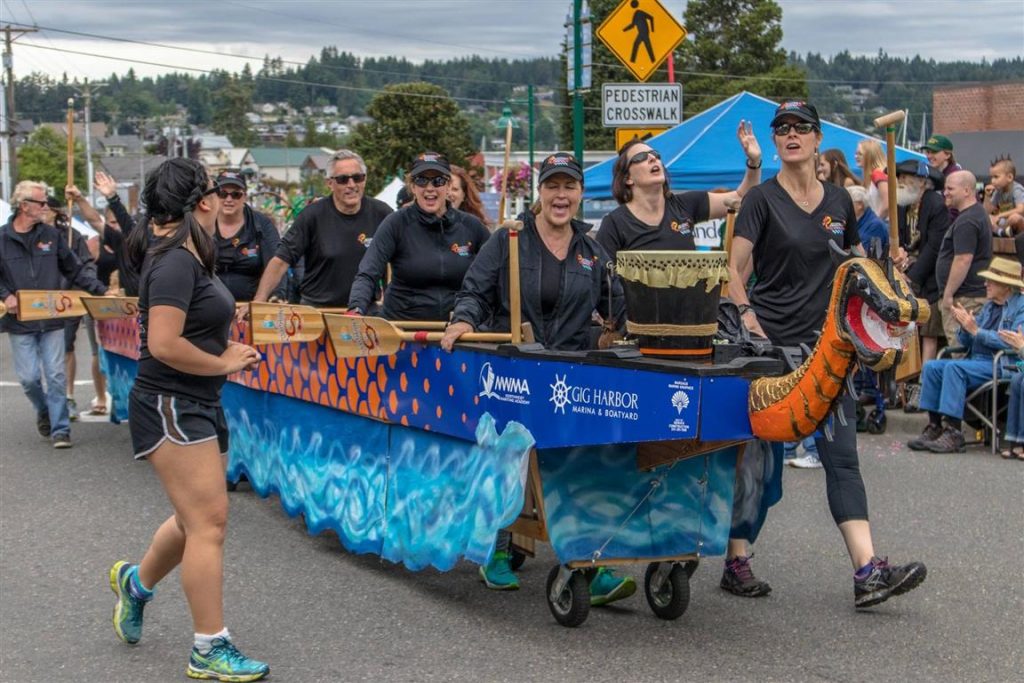 We held our first capsize drill here in the harbor this warm summer. It was important and very fun.

We are getting NEW UNIFORMS, thanks to Stephen Joseph, the company we hosted for team-building this summer. They were so appreciative that they wanted to gift us something and we chose shirts. The graphic is designed by coach and artist, Al Abbott. 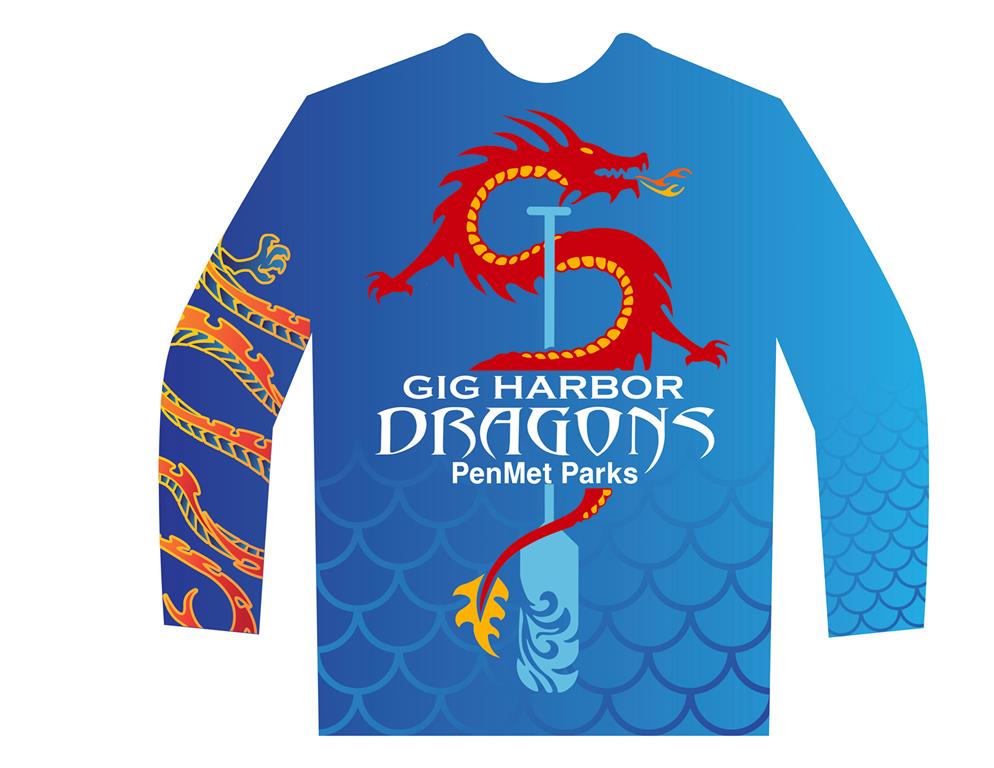 Daily, we revel in the beauty of this harbor from the water. We are a lucky bunch of folks who are appreciative, pretty social, who like a hard workout on the water, and who deeply care about this community.

Thanks so much, Kerrie. We really appreciate your promoting us! 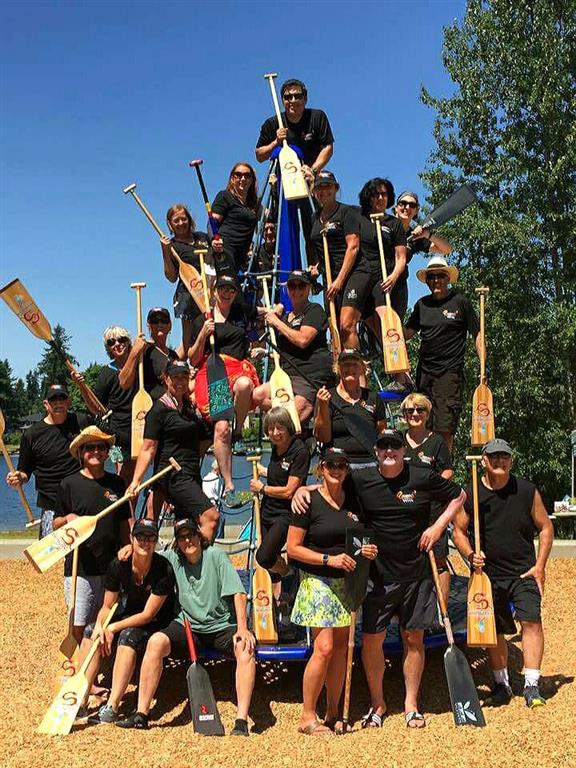