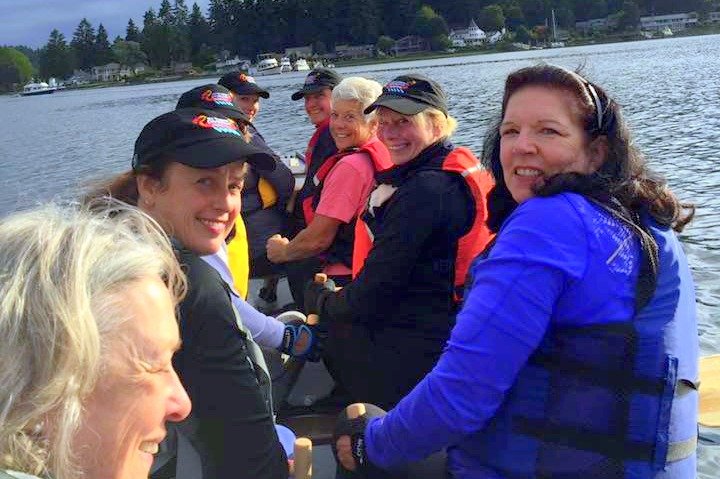 The Gig Harbor dragon boat team has come a long way since the program first breathed fire two years ago.

In a couple of years of collecting medals, almost as numerous as dragon scales and many of them gold, the team of passionate paddlers has soared from novice to the competitive division of dragon boat racing.

The Gig Harbor Dragons-PenMet Parks team got its start here at Gig Harbor Marina & Boatyard with a champagne christening of their boat in 2015. That’s when boatyard General Manager Ron Roark bought the community’s first ornate, dragon-headed vessel after exhibition races by the Tacoma dragon boat team during the Gig Harbor Paddlers Cup that year. 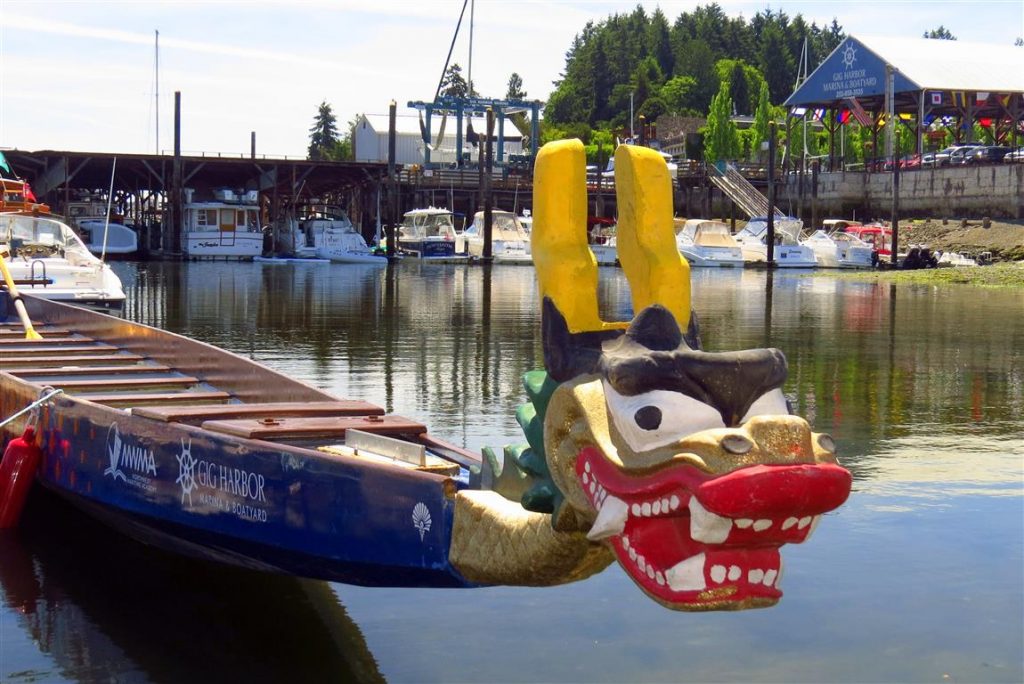 The ornate dragon boat purchased by Gig Harbor Marina & Boatyard and owned by the Northwest Maritime Academy is a frequent sight in the harbor.

Let’s just say the idea caught fire for Gig Harbor to have its own dragon boat after local participants got a taste of the exhilarating sport. So the boatyard supplied the dragon boat, which is now owned by the Northwest Maritime Academy at Gig Harbor Marina & Boatyard. 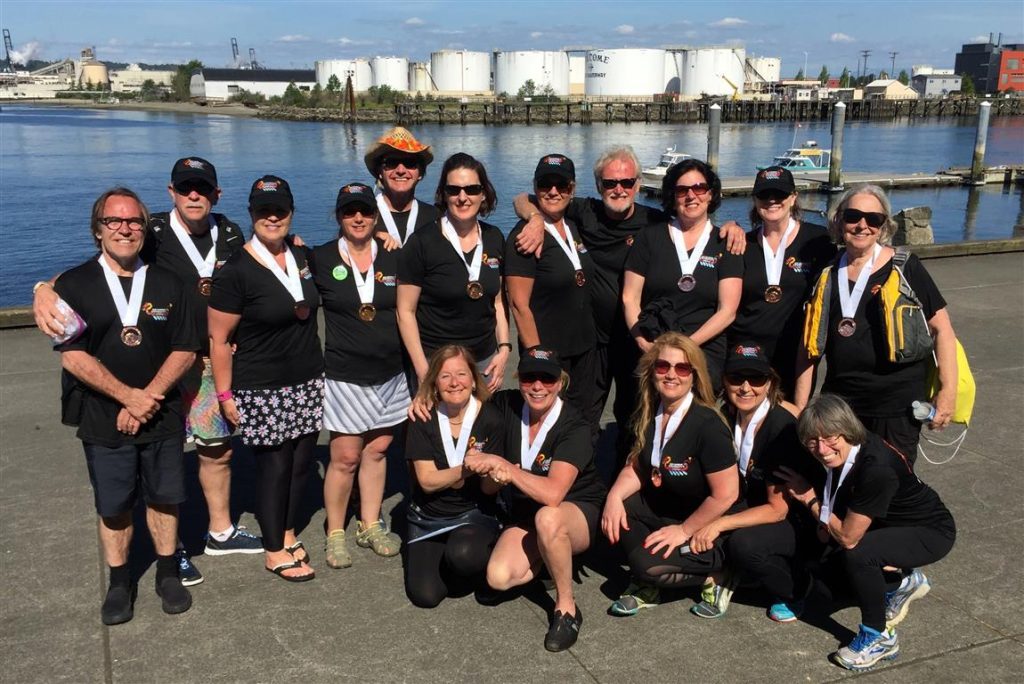 The Gig Harbor Dragons-PenMet Parks team poses with winning medals after a recent race in Tacoma.

It is a partnership — between boatyard, maritime academy and the Gig Harbor Dragons — that is a good fit for all.

“We are grateful to Ron (Roark) and to the Northwest Maritime Academy for jump-starting our passionate bunch of dragon boaters by providing the boat,” said team organizer Sharon Shaffer.  “Yes, we have come a long way since the initial grassroots informational and support gathering meetings. Ron was right there and offered to purchase a boat for our crews to use.”

The Gig Harbor Dragons-PenMet Parks team has become so good, in fact, that they organized rather than participated in the dragon boat portion of this spring’s Paddlers Cup races in the harbor.

“Gig Harbor Marina & Boatyard is very proud of their accomplishments,” said Roark shortly after the Paddlers Cup in April. “We never knew when we bought this boat how successful the team and our partnership would be. We want to acknowledge their fantastic leadership at the Paddlers Cup.” 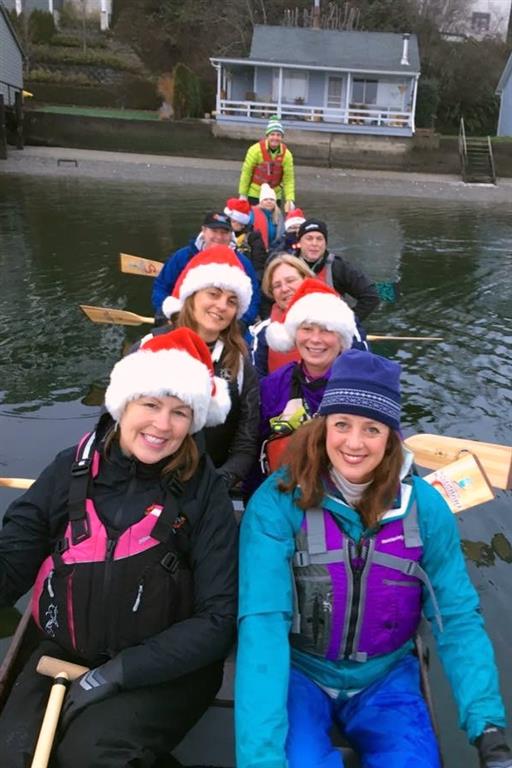 Dragon boat paddlers practice in the harbor throughout the year, no matter the temperature or season.

The Maritime Academy’s dragon boat is well-used by the group’s 46 members, even through the cold winter months, says Shaffer.

“Passers-by will see us up to five times a week,” she said. “First, stretching at the Rotary pagoda in Skansie park, then boarding the boat at Jerisich Dock, and then fiercely paddling through the harbor for 60- to 90-minute practices.”

The early morning and evening practices have paid off.

“Last year we were considered novices and competed in that division,” Shaffer wrote in an email.  “We won a bunch of gold medals. This year we have been moved into the competitive division—no big surprise (given the wins).  So now, instead of 250-meter races, we compete in 500-meter races.  That’s TWICE as far!!

“Now, instead of competing with novices, the Gig Harbor Dragons-PenMet Parks team races against some highly experienced teams — some who come from as far away as Las Vegas and Vancouver, B.C.  We have been holding our own—but, yes, we have new goals!!

“Our first race this spring was in Olympia — we came in last.  A few weeks ago we competed in Tacoma and earned a bronze medal. On July 15, we race at Lake Meridian in Kent, and Sept. 9 and 10 we travel to Flathead Lake in Montana for a race.

The Gig Harbor Dragons celebrate successful teamwork at the finish line of a 2016 race.

“We enjoy sharing the rented moorage space at Gig Harbor Marina & Boatyard with our buddy, the gondola (Nellie, of Gig Harbor Gondola). We are also grateful for access to the supply shed where we store our equipment and, of course, the bathrooms.

“We are incredibly grateful to be aligned with PenMet Parks, and through this alliance, are able to offer a sustainable paddling program here in the harbor.

“Gig Harbor Marina & Boatyard is very proud of their accomplishments. We never knew when we bought this boat how successful the team and our partnership would be.” – Ron Roark, boatyard general manager

“Gig Harbor Dragons-PenMet Parks has been a constant force in the community ever since we started.  As a community service we have been auctioned off by local service groups in fundraisers.  Teams of Gig Harbor Dragons have presented our program at four different service club meetings in the past year.

“As support to the Gig Harbor Canoe & Kayak Race Team for their Paddlers Cup this spring, our team members volunteered to run the dragon boat segment for them. 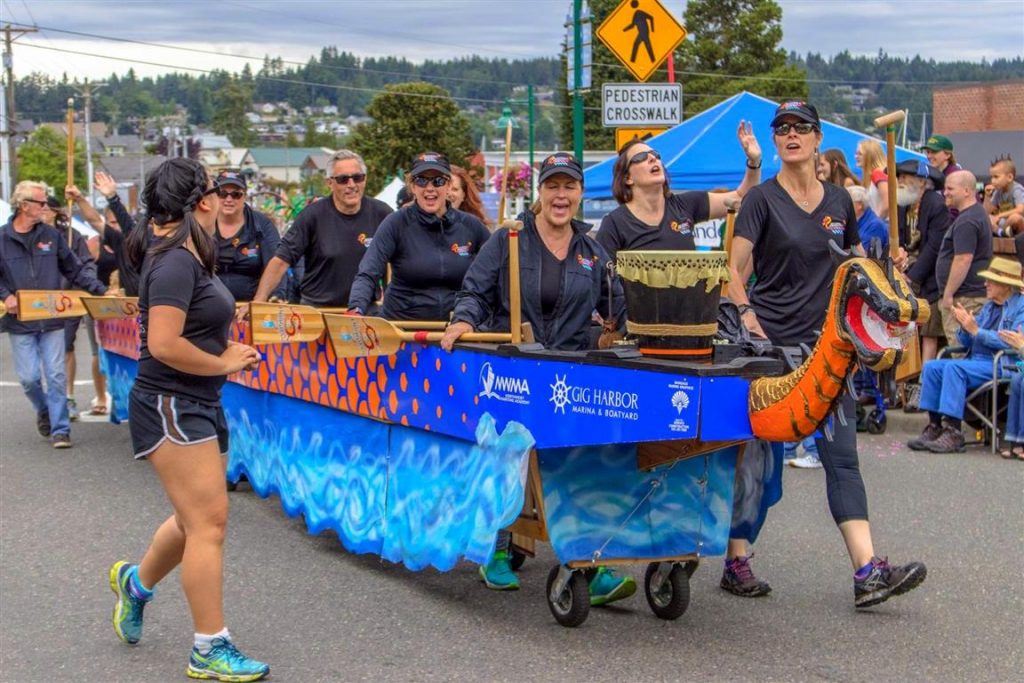 The successful Gig Harbor Dragons-PenMet Parks team walks in the Yo Ho Grand Parade during the 2017 Maritime Gig Festival.

“We appear annually at the Maritime Gig Festival parade in our Dragon Float, a twin to Ron’s boat. And most recently, we were included in the “Evening Magazine” television spot highlighting the opening of the beautiful new Welcome Center at Skansie Park. (WE WERE ON TV!!)

“Members of this team have dedicated so much to make it work.  Folks in the crew take First Aid and CPR training and several have dedicated hours (and days) to becoming certified as steersmen and coaches. Those members, Al Abbott, Kurt Grimmer and John Olson, volunteer their time to serve as steersmen for our practices.

“Laurie inputs our practice and race dates into a scheduling application called Team Cowboy. That way members RSVP for any practice and be assured a spot in the 20-person boat. Al continually trains through Tacoma to increase his prowess as coach and he never misses a practice. 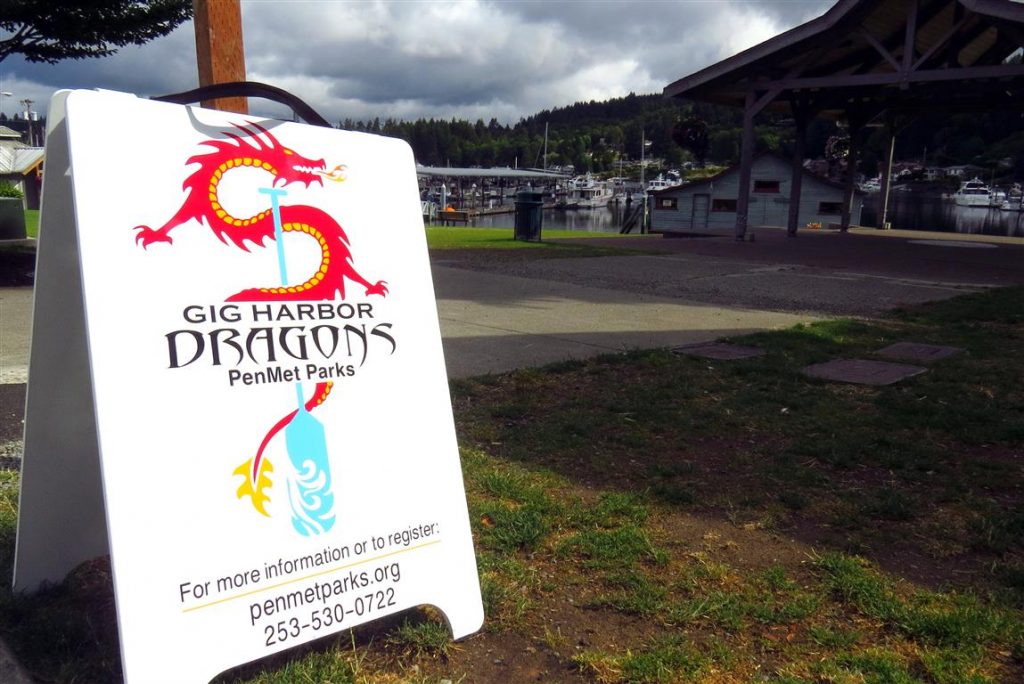 “Margaret regularly shows up early for practices to bail out the boat. Margaux created our logo, which shows on our ever present A-frame board and on all of our team clothing, merchandise and marketing. Margaux and Ed designed and built the dragon float. Annie regularly updates our Gig Harbor Dragons Facebook page.

“We have a new team preparing a sponsorship drive for Gig Harbor Dragons-PenMet, with dreams of further expanding our PenMet Club to include youth programs and team-building programs for organizations. 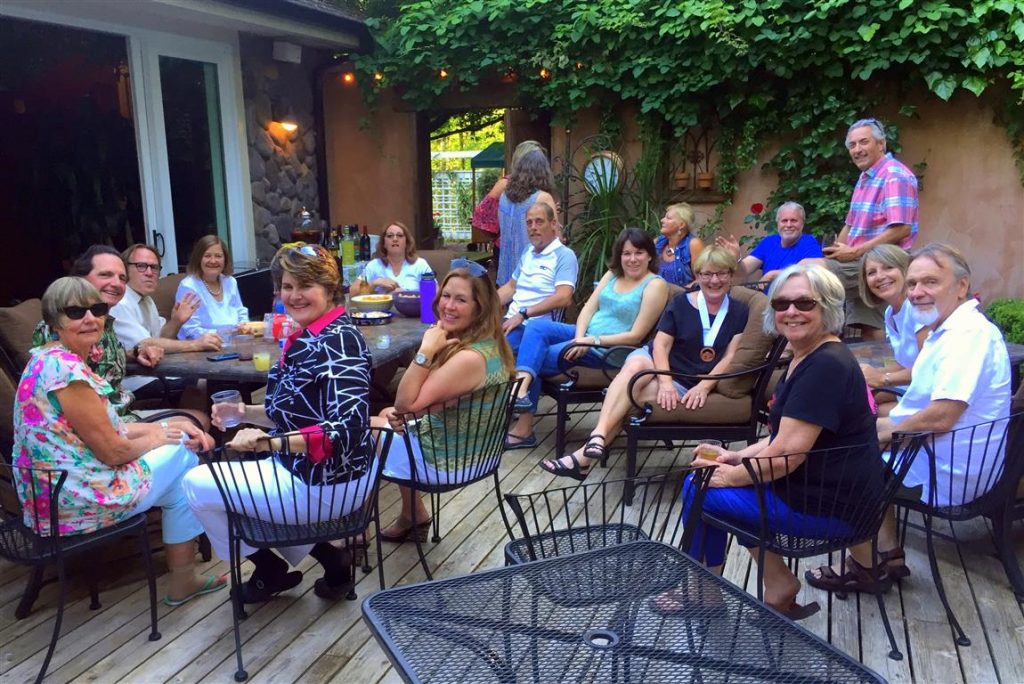 The team that paddles together relaxes together. The Gig Harbor Dragons spend time with each other on and off the water.

“Thanks so much for including us in your blogs.” — Sharon

“We are so proud of the dragon boat team. We had no idea how far it could go.” – Mark Lindeman, boatyard manager at Gig Harbor Marina & Boatyard