The Gig Harbor Fire Department was able to run a real-scenario drill to be ready for a marina fire thanks to the cooperation of Gig Harbor Marina & Boatyard.

All marinas in town benefit from a practice at an actual moorage facility in the event that a fire breaks out among their boats. Gig Harbor Marina & Boatyard was happy to again provide the training setting, said managing member Ron Roark, and Gig Harbor Fire was very grateful for the opportunity. 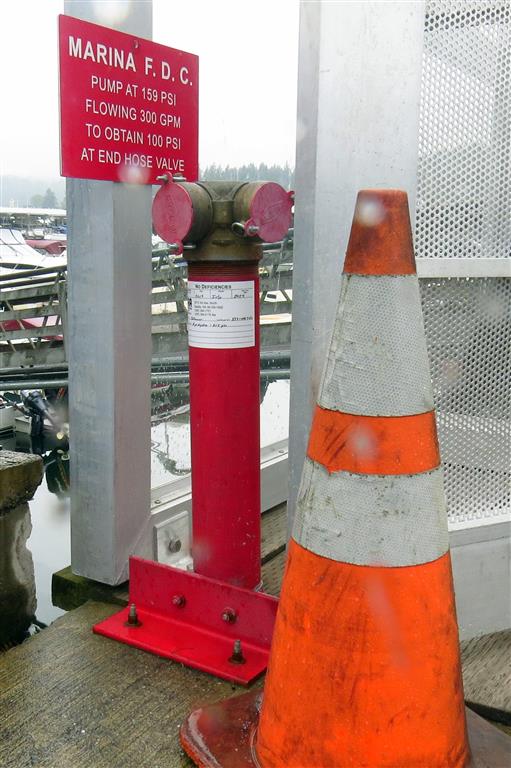 “Thank you again for allowing us another opportunity to train at your marina,” Lt. Marcin Szczepanski of the Gig Harbor Fire Department wrote in an email to Roark. “We appreciate your continued support and hope we serve as good stewards of the facility you provide for us.  The ability to train on an actual marina vs. traffic cones in an empty parking lot makes for a better experience.”

The fire department ran training sessions in the morning and afternoon on a rainy day at the boatyard last week. The objective was to utilize the marina’s stand-pipe system and also to lay a “manual” stand-pipe system, which is essentially a length of hose that mimics what the built-in system does, explained Szczepanski.

“All the marinas are required to have a stand pipe,” he said. “Sometimes they’re in poor condition and many have never been tested, so a drill gives us the opportunity to check them out.”

“The ability to train on an actual marina vs. traffic cones in an empty parking lot makes for a better experience.” – Lt. Marcin Szczepanski of the Gig Harbor Fire Department

Boats, being made out of fiberglass, burn very hot and fast, said the lieutenant.  So quick response time, working equipment and practice are vital to fighting a marina fire.

Moorage customers here at Gig Harbor Marina & Boatyard can rest assured: our stand pipe is in great shape, plus the marina has additional hose connection points down among the moored boats. 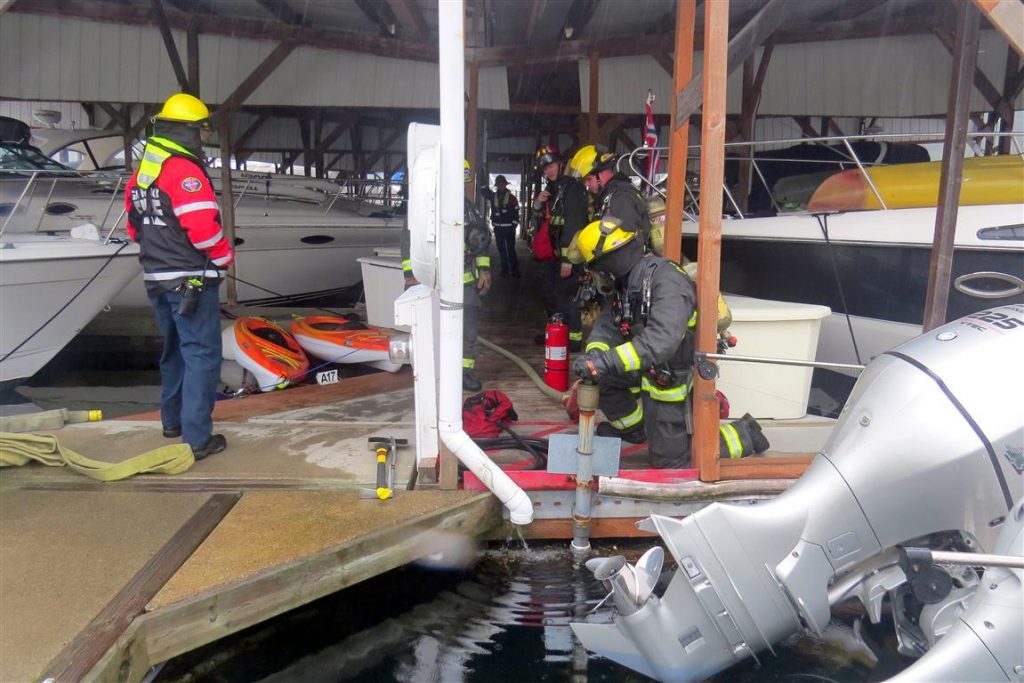 Gig Harbor firemen practice connecting a hose to a water line down among moored boats at Gig Harbor Marina & Boatyard. The marina has hose connection points every 100 feet.

“Normally, if a boat was on fire at the end of the marina, we’d have to run a hose all the way from the parking lot,” he explained. “But here, every 100 feet there’s a connection.”

The drill went very well, Szczepanski reported in his email to the marina after the practice day. 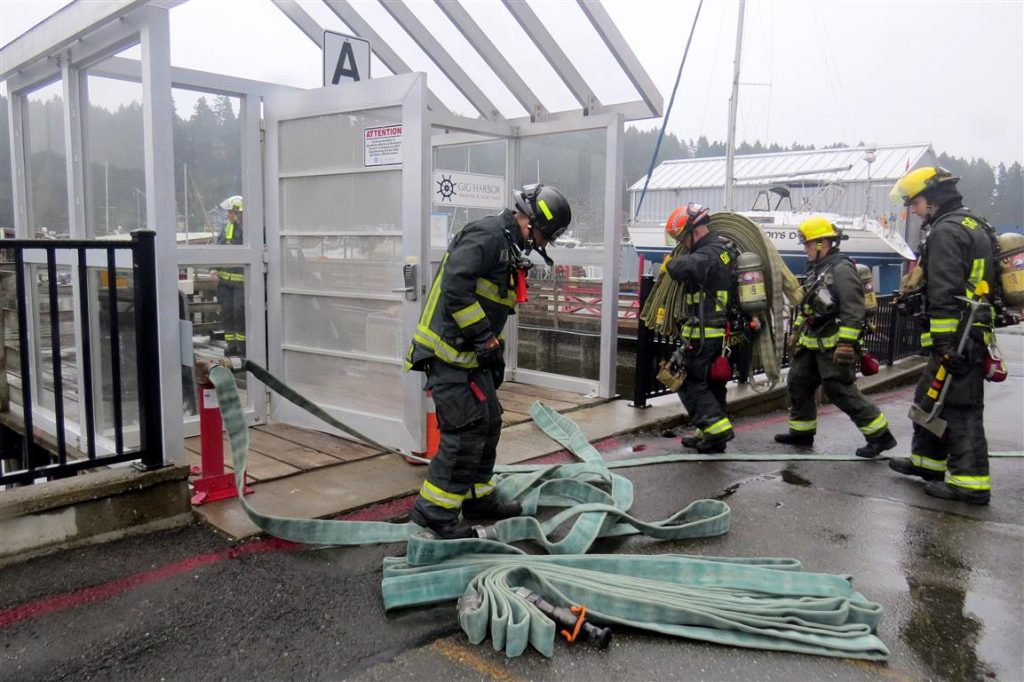 Gig Harbor firemen get hoses into position for their fire drill at Gig Harbor Marina & Boatyard.

“In addition to the standpipe drill, we also pulled hose from a new configuration that all the engines had converted to,” he said. “So that was an added bonus of the training. Over all, everyone who participated gained great experience and hopefully will build off of it moving forward.”

The fire department prides itself on conducting these vital fire drills while causing little disruption to routine marina and boatyard operations. 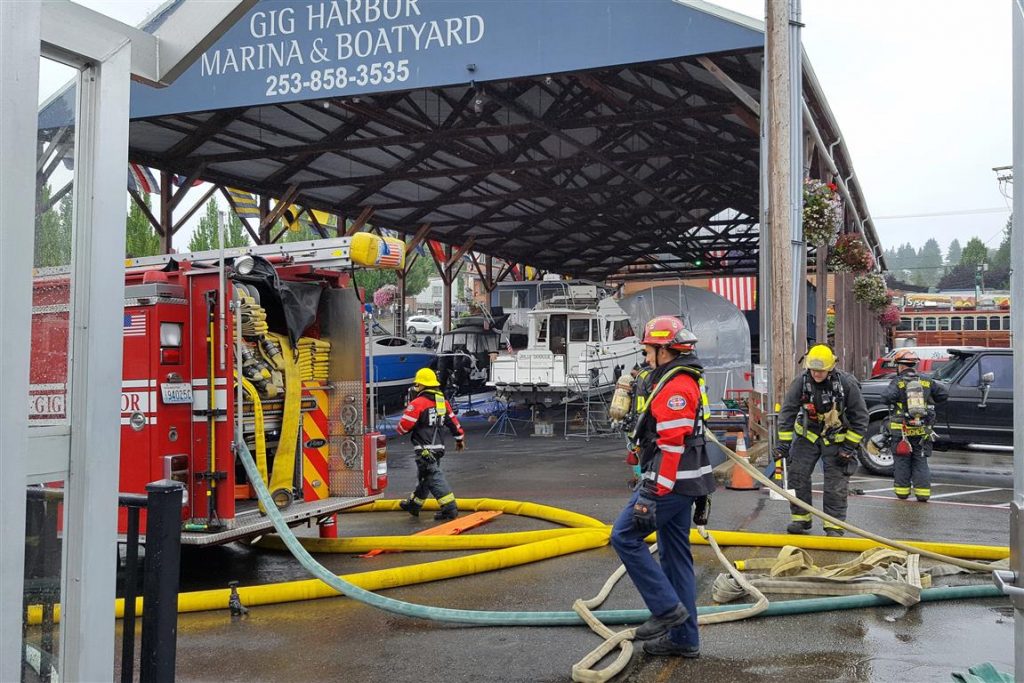 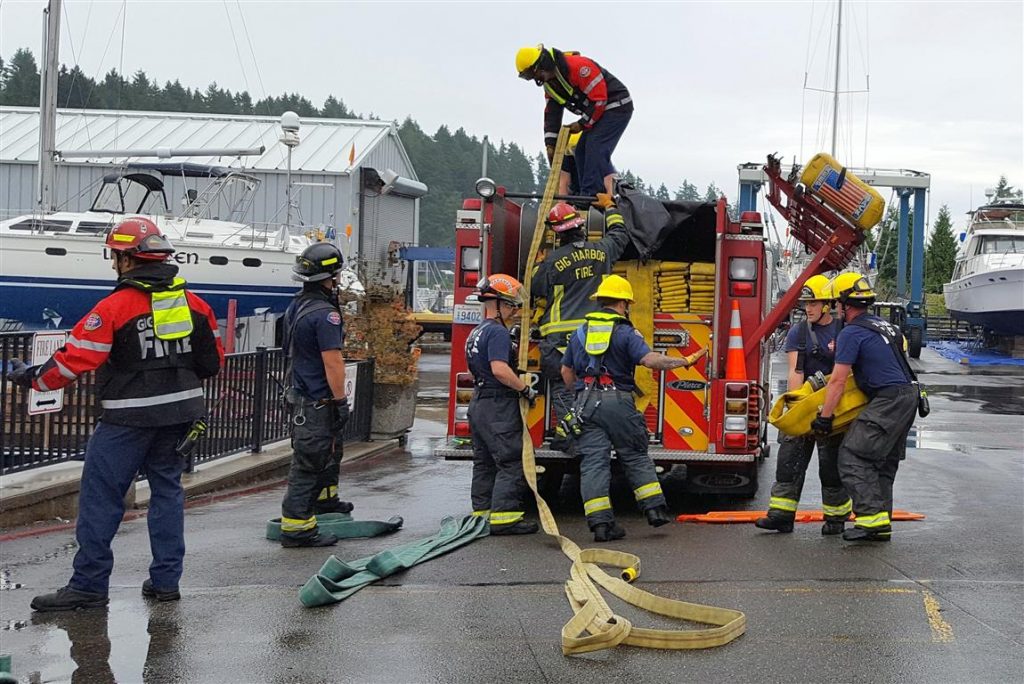 “We will utilize the first section of the marina which will allow us to quickly deploy and pick up as to minimize our presence,” Szczepanski explained prior to drill day.

“With that said, every boat owner we have made contact with has expressed their support of our presence there,” he told Roark. “We hope to maintain that positive relationship with both the marina residents as well as you, the management. We understand the amount of activity that goes on down there and will do whatever is necessary to not be a nuisance.

“It is my hope that this won’t be the last time we utilize your marina,” the lieutenant said. “Please pass on our thanks to all the folks that we had the pleasure to meet and hope we weren’t too much of a distraction.” 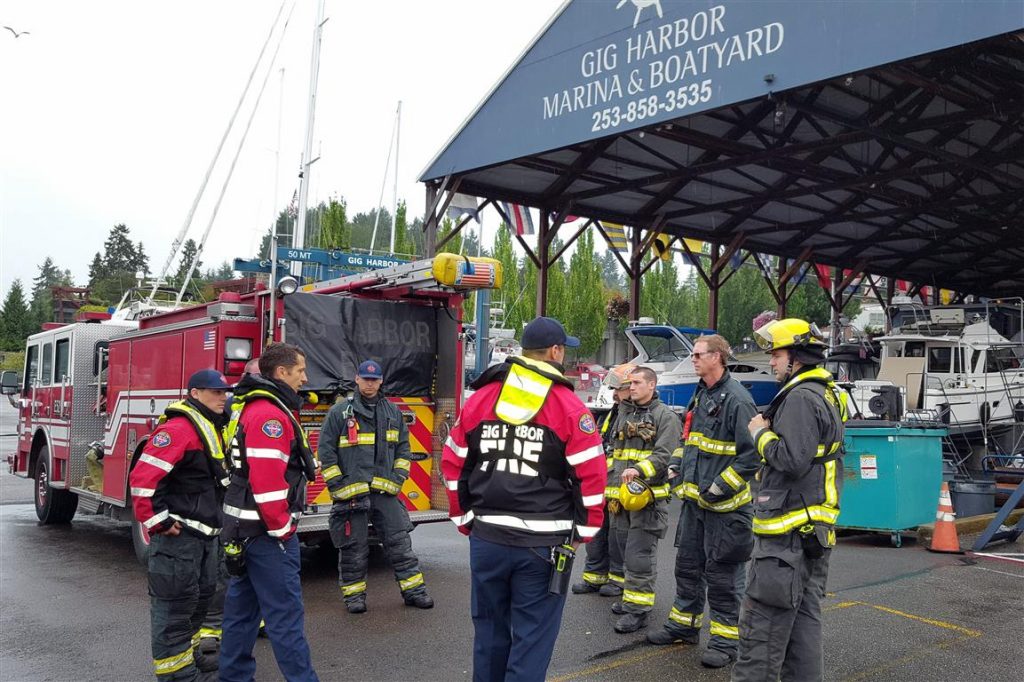 Lt. Marcin Szczepanski of the Gig Harbor Fire Department, left foreground without a hat, briefs his crew before beginning the fire drill at the boatyard.

Not a nuisance or distraction at all when it’s all about saving lives and property.