Jacob Departs As Scheduled on his Solo Pacific Row

Jacob Adoram Hendrickson, on a quest to be the first person to complete a solo, unsupported row across the Pacific Ocean, pushed away from the dock in Neah Bay as scheduled on July 7.

“And I’m off!” Jacob posted on his Facebook page the next day. “Thanks to everyone who came out to see me off!”

Several friends and fans were on hand at the end of B-Dock in Makah Marina to see Hendrickson off on his record-setting journey and they snapped these photos for the rower’s Facebook page. 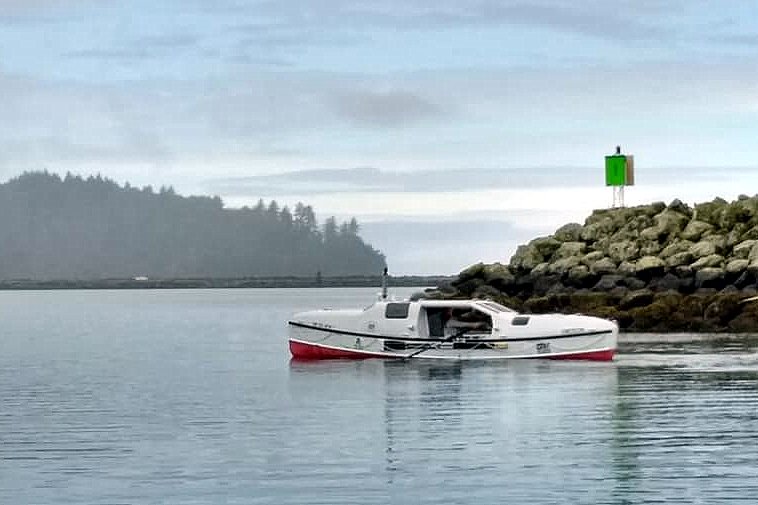 We have told you about the former Air Force fighter pilot’s record-setting journey in a few blogs on this website, including his Meet Jacob party at The Club @ the Boatyard, and now you can follow him as he progresses on his historic trip to Cairns, Australia. At the time of this blog posting (Monday, July 16) Jacob was just south of Cannon Beach, Ore.

Hendrickson calculated that his route will traverse the Pacific across 7,145 statute miles of open ocean, making it the longest solo, non-stop attempt from North America in the history of modern ocean rowing, according to his website.

“And I’m off! Thanks to everyone who came out to see me off!” – Jacob Adoram Hendrickson, July 8 on Facebook

He estimates that his journey will take about eight months, although he has food stowed away on board his 28-foot rowing vessel, Emerson, for 10 months of travel.

Jacob Adoram Hendrickson, right before his departure from Neah Bay, Wash., on July 7.