Gig Harbor Gondola just got bigger. The popular Venetian-style harbor tour operation has now doubled in size with the addition of a new gondolier from California and a new gondola, fresh off the ship from Italy.

Gondolier Greg Garite — shown above, and yes, he sings — joined his friend John Synco’s Gig Harbor Gondola business a month ago and the new gondola arrived by truck at Gig Harbor Marina & Boatyard last week. Tommaso Sebastiano, the new 36-foot gondola, named for the two sons of the gondolier in Venice who originally owned it, started taking customers out almost as soon as it was launched by travelift operator Mark Rybin. 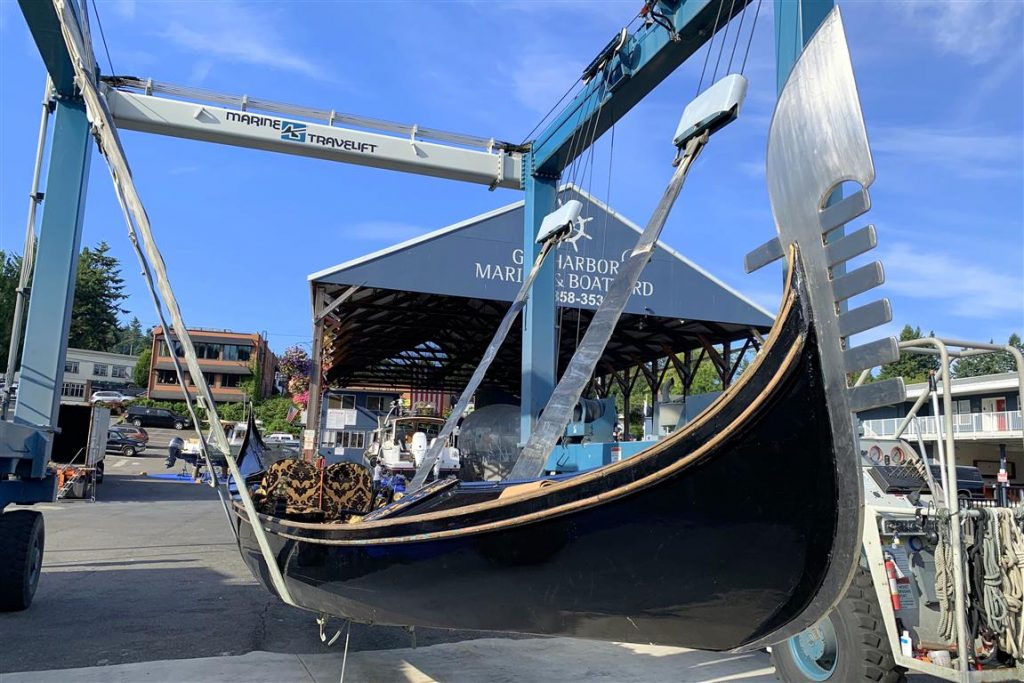 A new Venetian gondola, Tommaso Sebastiano, the second boat in the Gig Harbor Gondola fleet, is ready to be launched at Gig Harbor Marina & Boatyard.

Both additions to the fleet, Garite and Tommaso Sebastiano, are a result of the harbor cruise business booming since Synco started it in the fall of 2015. Now with an average of more than a 1,000 passengers a year, and sometimes as many as seven tours a day, it was time to expand the fleet, said Synco.

So it was perfect timing when his long-time friend and former colleague Greg called from Southern California. They’ve known each other since the 90’s and they used to row together “way back in the day” in Long Beach, Calif., where they rowed for the first modern American gondola company, says Garite.

“John actually taught me how to row and I learned the basics of Venetian rowing in Long Beach,” said ‘Gregorio’ as he calls himself for his Italian gondoliering name. “I called John last summer to propose coming up here. It was good timing because he was flooded with customers.” 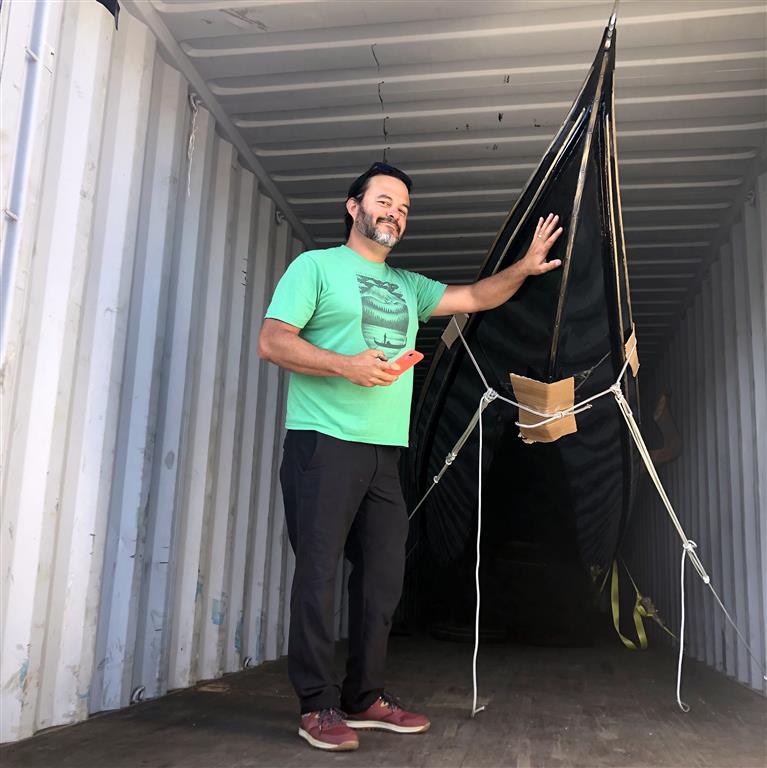 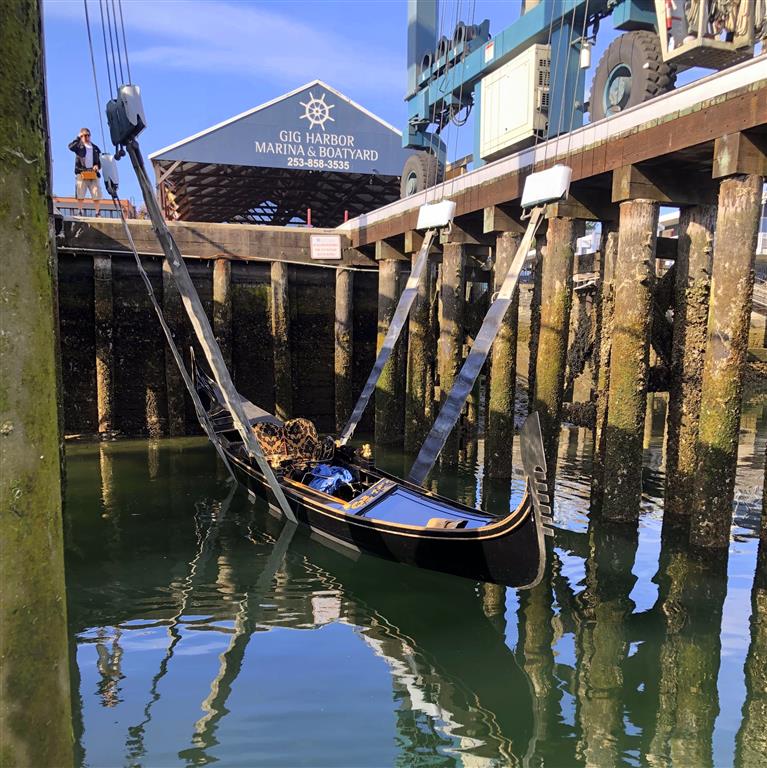 So Gregorio, who taught elementary school for eight years, made a life change and moved from Orange County to Gig Harbor this past June.

“I just arrived here a month ago from Southern California where I used to row with John way back in the day, and it’s like I’ve been here my whole life,” he said during a media day outing that boatyard videographer Chance Busey put together with Gig Harbor’s gondoliers. It was a perfect opportunity for us to meet Greg, catch up with John Synco — or ‘Giovanni Cinque’ as he goes by on the water — and finally go for a gondola ride after blogging about it for almost four years.

The guys, in their real-thing Venetian gondolier clothing, took us out for a row in Nelly, Synco’s original gondola, a few days before Tommaso Sebastiano arrived at the boatyard. Nelly, who plied the canals of Venice for 25 years, is one of just under 30 authentic Venetian gondolas in the United States — and the only one in the Pacific Northwest, says Synco. And now there are two, both in Gig Harbor.

John Synco, foreground, and new gondolier Greg Garite at oar in the background. Boatyard blogger Kerrie Clos, who didn’t plan on being on-camera, is seated midship on Nelly.

Garite is already enjoying his new harbor life and the stark contrast with his old job in the classroom: much less stressful, fresh air and nothing but nature around you, he said as he rowed Nelly past anchored boats and kayaks quietly gliding down the harbor.

“I just love it,” he said of his move to the harbor. “I love it every minute. Being on the water, the beautiful surroundings, the nice people. Everybody’s happy to be out here. Everybody out on their boats around us is so nice and welcoming, and it’s just a pretty special place to be.”

Garite is joining Synco as a partner in the popular harbor tour business that takes customers out for an intimate, authentic gondola experience year-round. Both gondoliers want to retain the personal, small business feel of the operation, teaching passengers about Gig Harbor, Venice and gondola traditions and making them feel part of the business, says Garite. 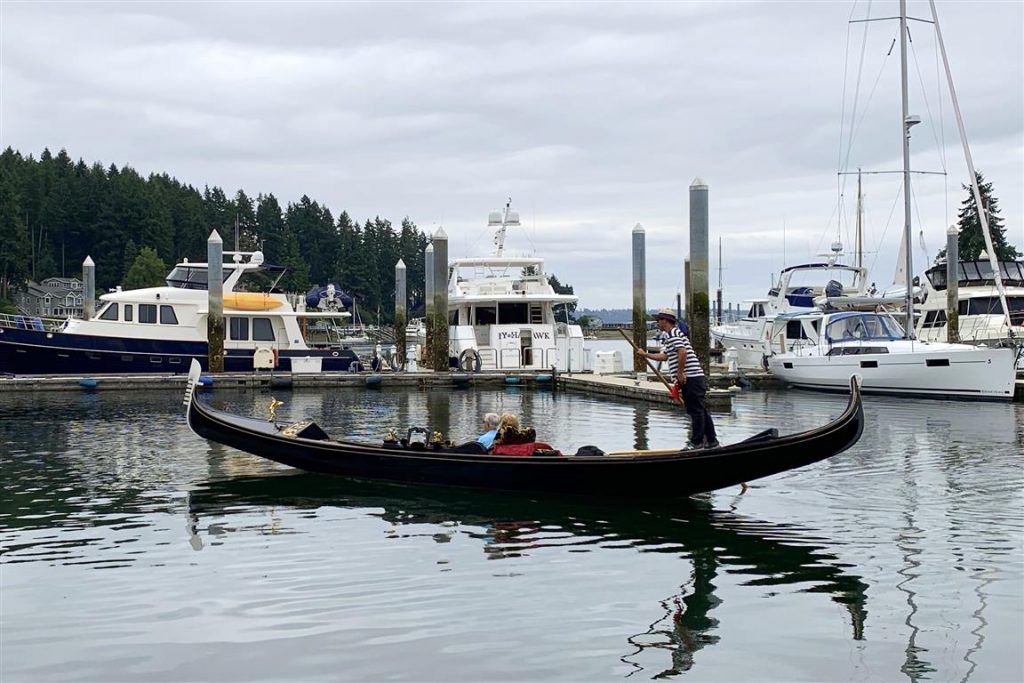 New gondolier Greg Garite, or ‘Gregorio’ in his gondoliering name, takes customers out on Tommaso Sebastiano shortly after the new boat was launched at Gig Harbor Marina & Boatyard.

Both gondoliers have beautiful singing voices, although “it’s a myth that all gondoliers sing to you in Venice,” says Sycno. “We’re playing to the romanticized idea of Venice in singing more than they do.”

And aren’t we the luckier for it. The day we were out on the water harbor, residents came out onto their decks and balconies to listen to Giovanni’s beautiful Italian serenade as he rowed past.

“I just love it. Being on the water, the beautiful surroundings, the nice people.” – new gondolier Greg Garite 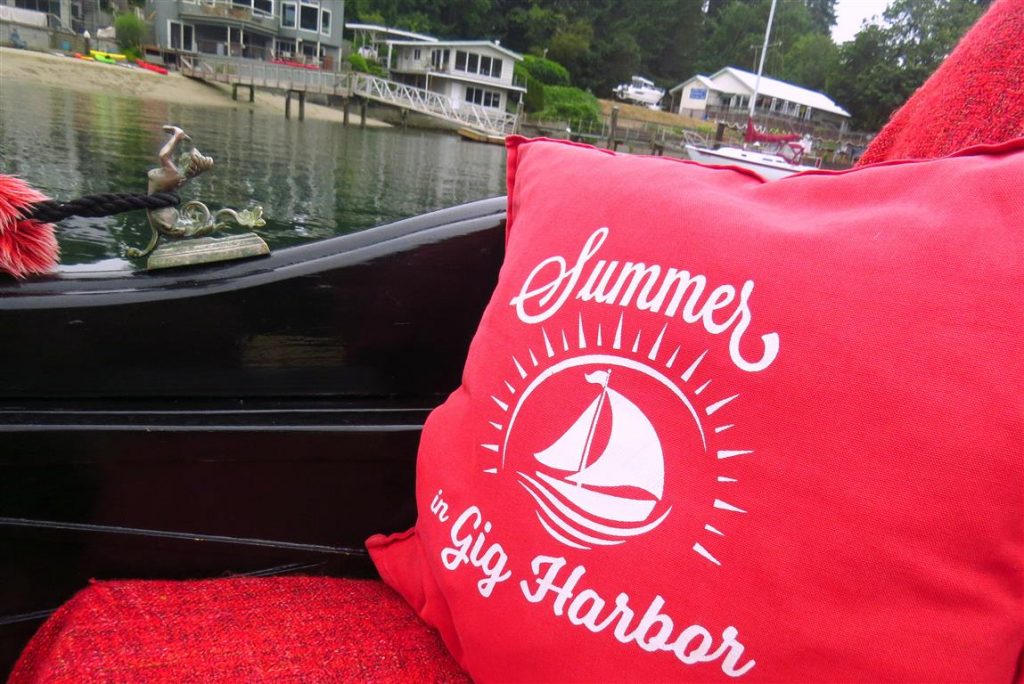 Gig Harbor Gondola’s passenger numbers have been going up every year, despite some people not realizing the tours run during the winter as well, says Synco. He and Garite operate their 60- and 90-minute harbor tours out of Gig Harbor Harbor Marina & Boatyard 12 months a year, working around the bad weather rain as needed.

“I tell people to bundle up and bring something hot to drink, something homemade, and it’s not that bad — especially if you have someone to cuddle with,” he said, adding that customers are invited to bring their own snacks and beverages. Nelly and Tommaso come supplied with cups and openers, as well as blankets for cold weather.

But it’s still summer season, so make plans for your perfect-weather Gig Harbor Gondola tour with Giovanni and Gregorio. It’s an authentic taste of Venice right here in the Pacific Northwest — and it’s delicioso.