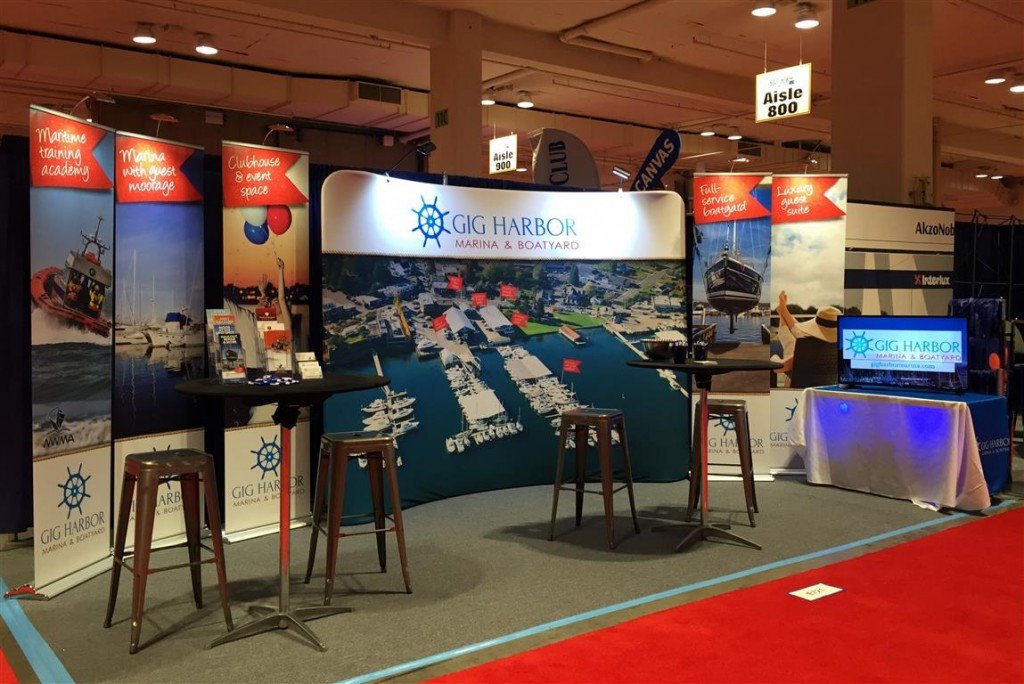 Gig Harbor Marina & Boatyard just finished a successful run at the Seattle Boat Show, with our colorful, “all-inclusive” booth proving to be a big draw with show-goers.

Large, inviting photo banners showcased the many facets of marine service and hospitality available at Gig Harbor Marina & Boatyard. They made it easy to engage visitors in conversation during the nine-day Seattle Boat Show, Indoors + Afloat at CenturyLink Event Center. 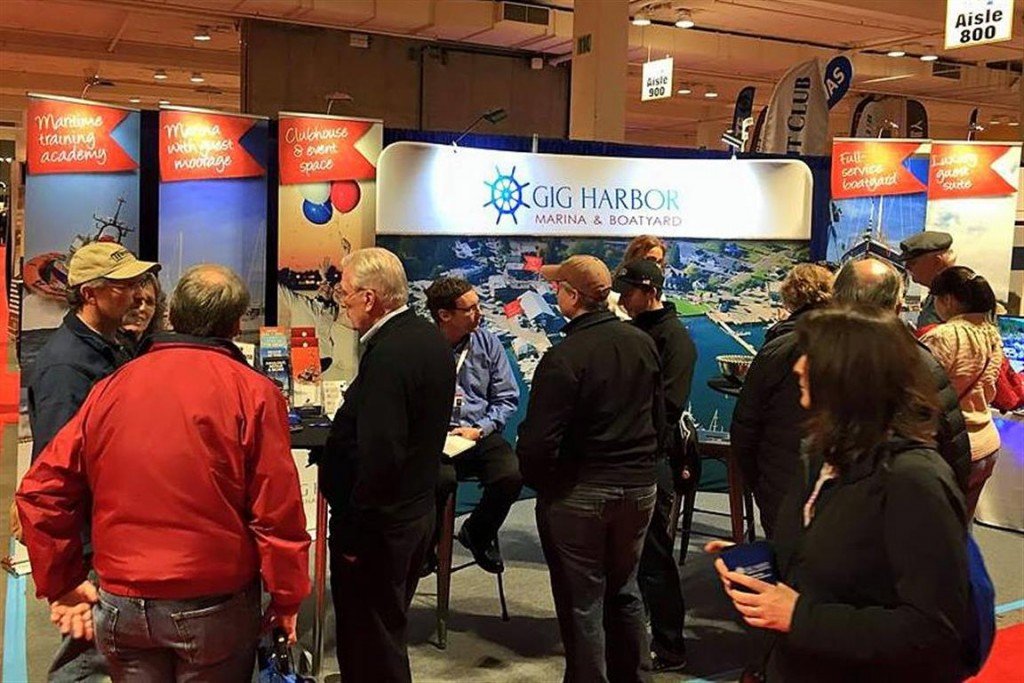 “We had a lot of interest in general and we had steady traffic,” said Mark Lindeman, boatyard manager at Gig Harbor Marina & Boatyard. “Our booth was all-inclusive, where we weren’t selling just one aspect,”he added. Instead, the marina offers a wide range of services and special features. A gourmet food trolley with outdoor seating is set to open this spring; new restrooms and showers are almost finished; a spacious venue and gorgeous guest suite await your next special event on the harbor, and a beautiful classroom for trainings and meetings is available.

All of these improvements have been added since last April. That’s when new owner and general manager Ron Roark took the helm at the downtown Gig Harbor boatyard and marina.  Since then, he has championed the marina as being “at the heart of it all” in Gig Harbor, and he was eager to share that message at the boat show.

“Managing partner Ron Roark proved his value to us in yet another way with his master salesmanship” at the boat show, said Lindeman. “No customer walked by without him asking if they’d been to Gig Harbor. He’d say, ‘Have you ever been to Gig Harbor? Well, I just bought this marina and here’s what we have planned.’ People like talking to the owner.”

Gig Harbor Marina & Boatyard’s booth drew hundreds of interested visitors who stopped by to see what’s new at the marina. Roark invited show-goers to sign up to join The Club @ The Boatyard, the beautiful event venue on the Gig Harbor waterfront. For just a dollar, anyone can sign up and become a member of The Club and be eligible to rent the venue and attend members’ events. Roark and other marina staffers signed up 300 new Club members during the boat show, with proceeds going to the Gig Harbor Canoe & Kayak race team. 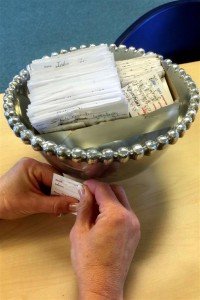 Gig Harbor Marina & Boatyard hospitality staff  pulls a winning name for a prize drawing. The winner can choose a free haulout at the boatyard or a complimentary overnight stay at the luxury Guesthouse @ The Boatyard. (Photo courtesy of Danielle Taylor)

Hundreds of new and prospective members’ names went into a bowl for a prize drawing. The winner can choose either a free haulout or a complimentary night at the gorgeous luxury suite, The Guesthouse @ The Boatyard. A name was drawn on Feb. 8 and the winner is being contacted to choose his or her prize.

Visitors strolling down “marina row” at the boat show learned about Gig Harbor Marina & Boatyard as an exciting, improved cruising destination.  The addition of nearly-completed restrooms and showers is making that more attractive than ever.

“Several yacht clubs are now interested in coming here to use our space,” said Roark. “They’re all interested in alternative guest moorage and our proximity to services and showers. ”

“It’s been on their list to come down here,” said Amy Faeth, marketing manager at Gig Harbor Marina & Boatyard. “A lot of people have smaller boats, so showers are a big draw.”

Another area of great interest to visitors at the marina’s booth was courses for captain’s licenses offered at the marina.  The Northwest Maritime Academy at Gig Harbor Marina & Boatyard offers many maritime and safety courses during the year. 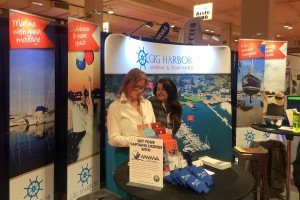 “People are just seeing what Gig Harbor Marina & Boatyard is all about,” said Lindeman.

For more information on The Club @ The Boatyard or The Guesthouse @ The Boatyard, contact Danielle Taylor, hospitality manager at Gig Harbor Marina & Boatyard, at dtaylor@gigharbormarina.com, or call 253-358-6546.