Gig Harbor Marina & Boatyard has you covered — literally — for your maintenance and repair needs during this rainy winter season. Sanding, painting, gel coating and fiberglass work all stay dry under the big shed roof at the boatyard.

I stopped by Gig Harbor Marina & Boatyard right after New Year’s to see what new projects were under way on the yard.  It was a typical drizzly Northwest day, with even some snow in the wet mix, as I snapped pictures of boats up on stands with scaffolds and ladders next to their hulls.

I ducked into the office to chat with boatyard manager Mark Lindeman, who always has a fleet of boats for me to write about. 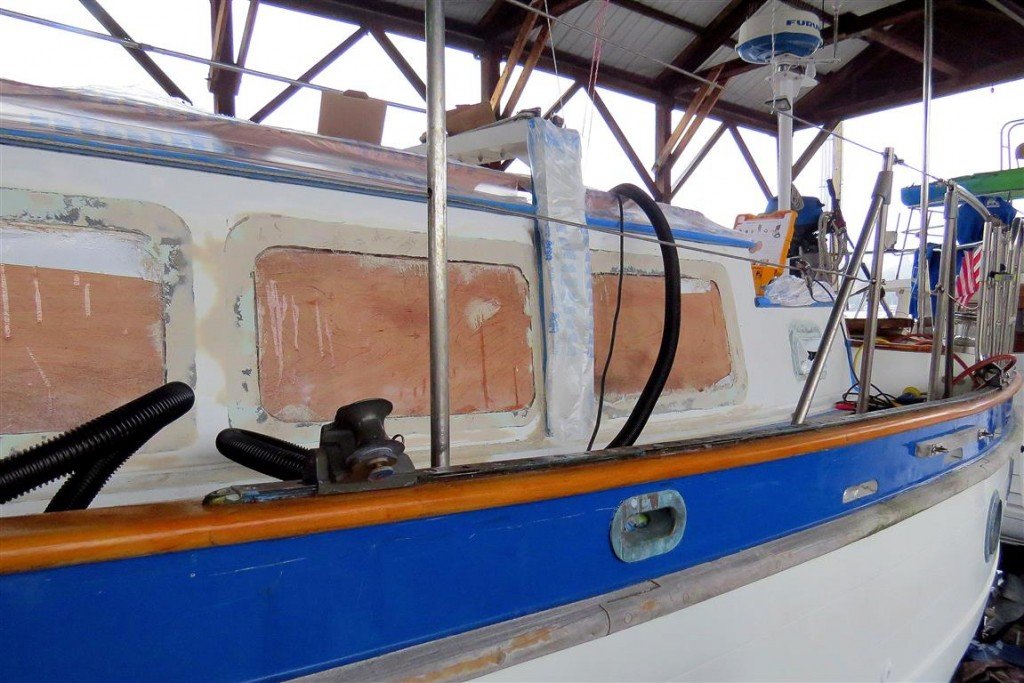 “Be sure to go see the progress on this boat,” he said, pointing out the window at the Spindrift 43 sailboat, which I wrote about a few weeks ago. The full-keel cutter is in for all new windows in the pilothouse and new bronze window frames to replace the old wooden ones.

“The work we’re doing is to resolve old leaks,” said Lindeman.  “The cabin sides around the window openings are being re-fiberglassed and repaired and the cabin sides and top will be repainted.” 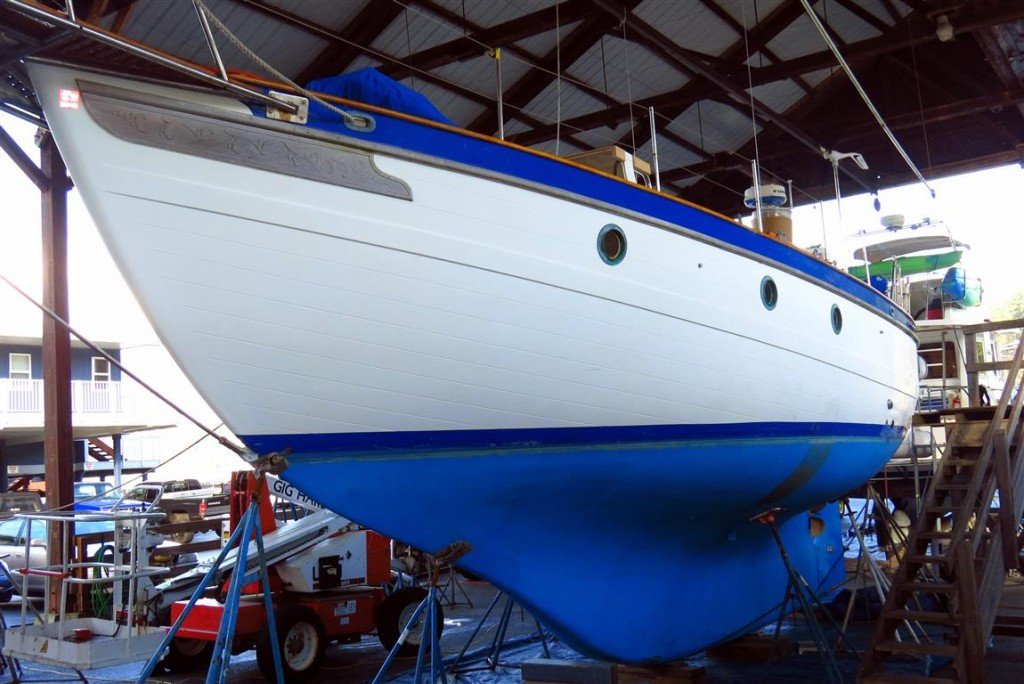 The blue water double-ender Majestic has a very extensive cruising history, continued the boatyard manager, who is a friend of the owner. The owner, a lawyer in Seattle, bought the boat in about 2000 and moved it to his backyard.

“He is a very busy lawyer and I thought, ‘this boat is never leaving the backyard,'” said Lindeman. “Well, he ended up sailing it down the West Coast, through the Panama Canal, over to the Mediterranean and Turkey. He’d leave the boat in various places and fly back; he pulled the mast and cruised through the canals of Europe; put the mast back and sailed across the Atlantic to South America; back through the Caribbean islands and then over to Florida, where he had the boat trucked home — all in six to eight years. He’s been halfway around the world and back.”

But his cruising adventures weren’t without some scary encounters. Majestic’s owner came across some shady marina and boatyard operators who stole parts off his boat, including the engine, and wouldn’t replace them.

“He felt he was going to be killed if he didn’t get out of there, ” said Lindeman.  “He got his boat out under the cover of darkness and sailed it without an engine for 1,000 miles to the Virgin Islands, where he had a new engine put in. This boat has a pretty exciting past and future.” 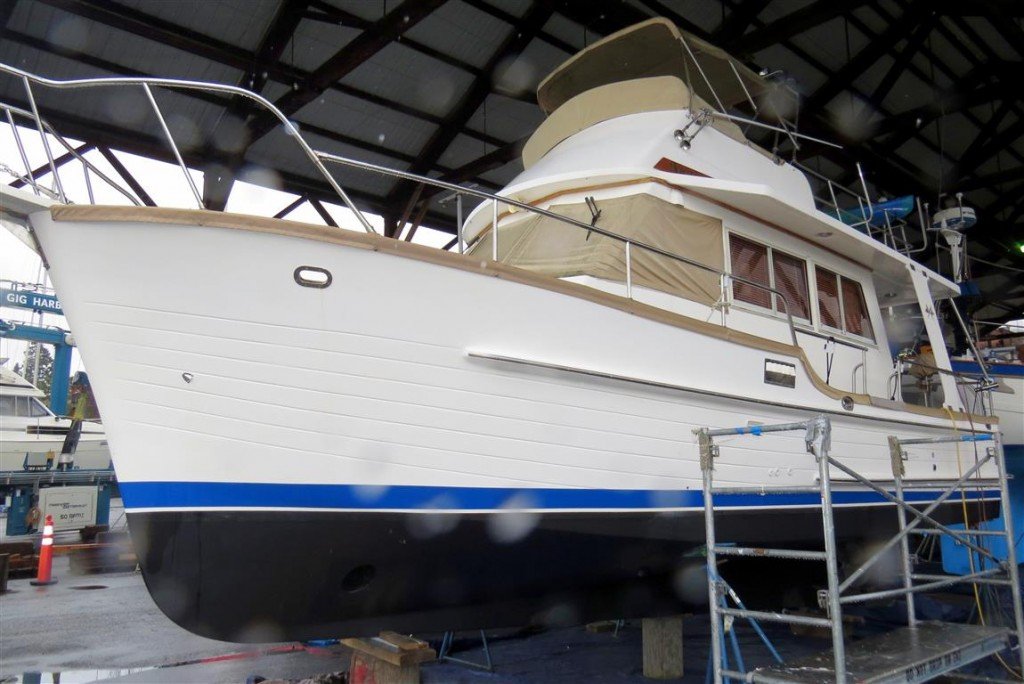 I left the boatyard office with a new appreciation of what it takes to cruise the world and went out to snap more photos of the storied Spindrift and other boats that Lindeman had pointed out. The boats were under cover for their various marine repair and maintenance projects at Gig Harbor Marina & Boatyard, but raindrops collected on my camera lens when I stepped out from under the high roof of the main working area at the boatyard. 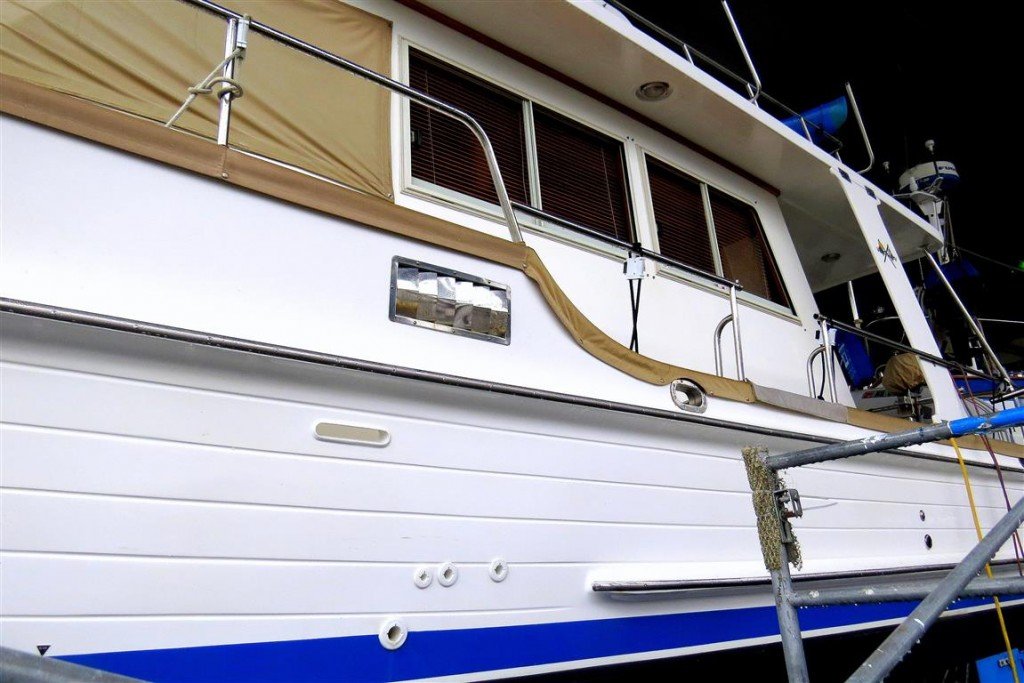 Next up was Victoria, an Island Gypsy 36 from Gig Harbor. The trawler is in because of collision damage and the crew at Gig Harbor Marina & Boatyard has repaired its stainless steel railings, and have also repaired Victoria’s fiberglass and matched her gel coat. 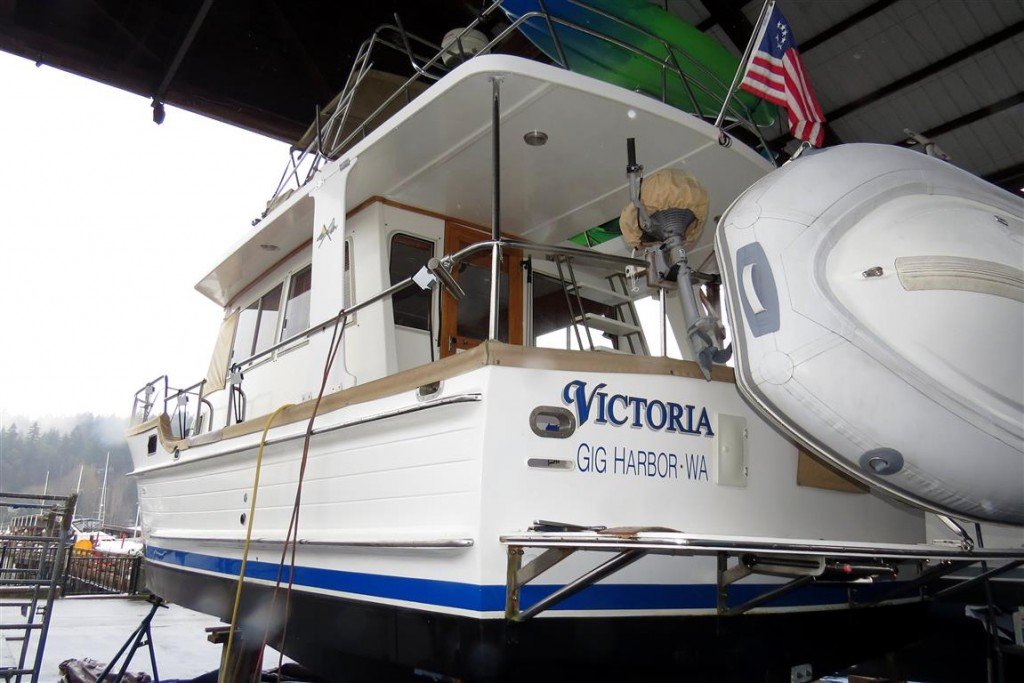 Like Loading...
Posted in Uncategorized
← CPR/AED Class a Hit at Northwest Maritime AcademyMarina Partner Wrote the Book on Hydrofoils →