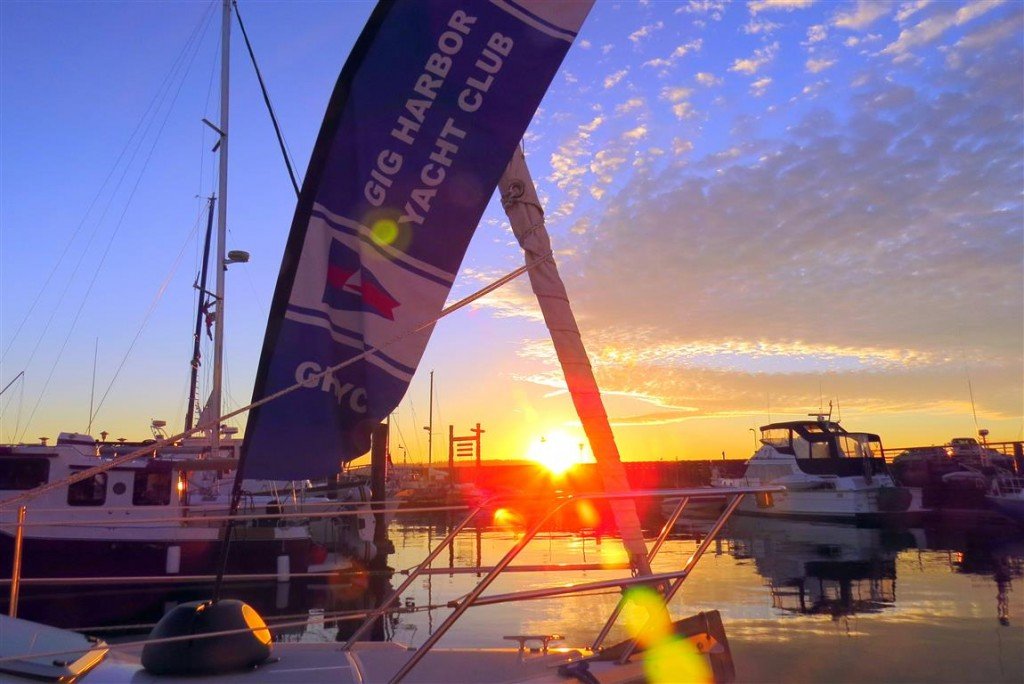 A few times a month people gather at a special meeting place and the talk quickly turns to summer cruising up north, winter cruising in far-away balmy locales, children, grandchildren and all the other usual things friends talk about. 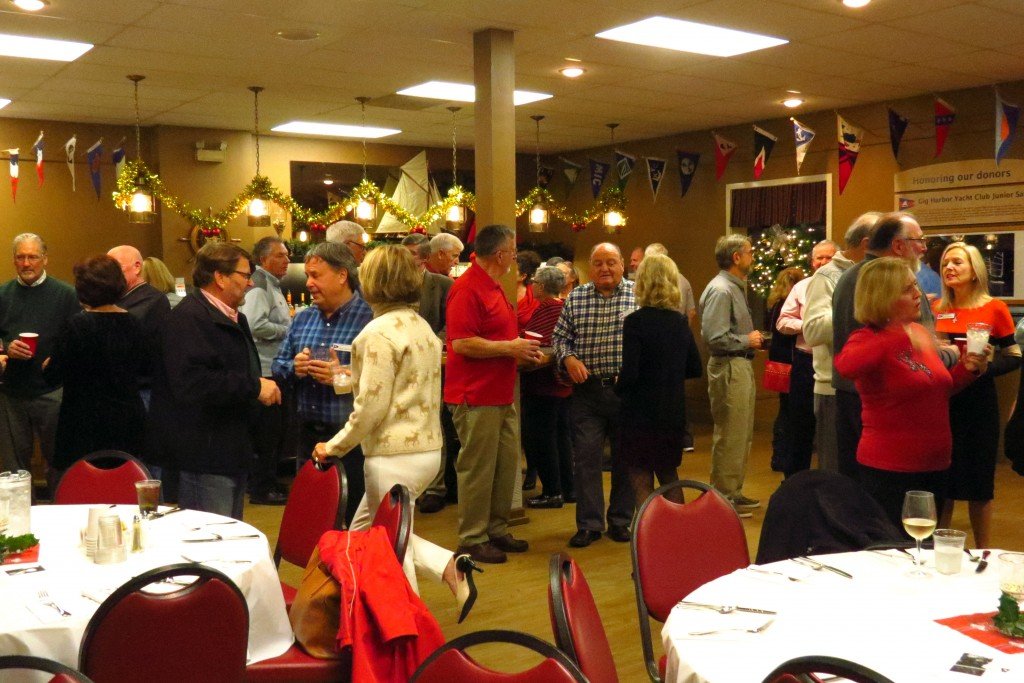 Yacht Club members get caught up with each other at the popular social hour before a general dinner meeting.

The special place is the Gig Harbor Yacht Club and it’s a comfortable spot to meet new friends and gather with old ones.  Between the monthly general  meeting dinners, a casual TGIF dinner one Friday a month, weekend cruises to a nearby marina, regular men’s and women’s events, there are many opportunities to get together with friends with a common interest:  having fun and boating.

Many members’ boats are moored at Gig Harbor Marina & Boatyard and others come for haulouts for regular service and repair by the boatyard’s skilled crew of shipwrights, master carpenters and mechanics after a summer of cruising. But you don’t need a boat to join the Gig Harbor Yacht Club. Just an interest in boating and having a good time will do. 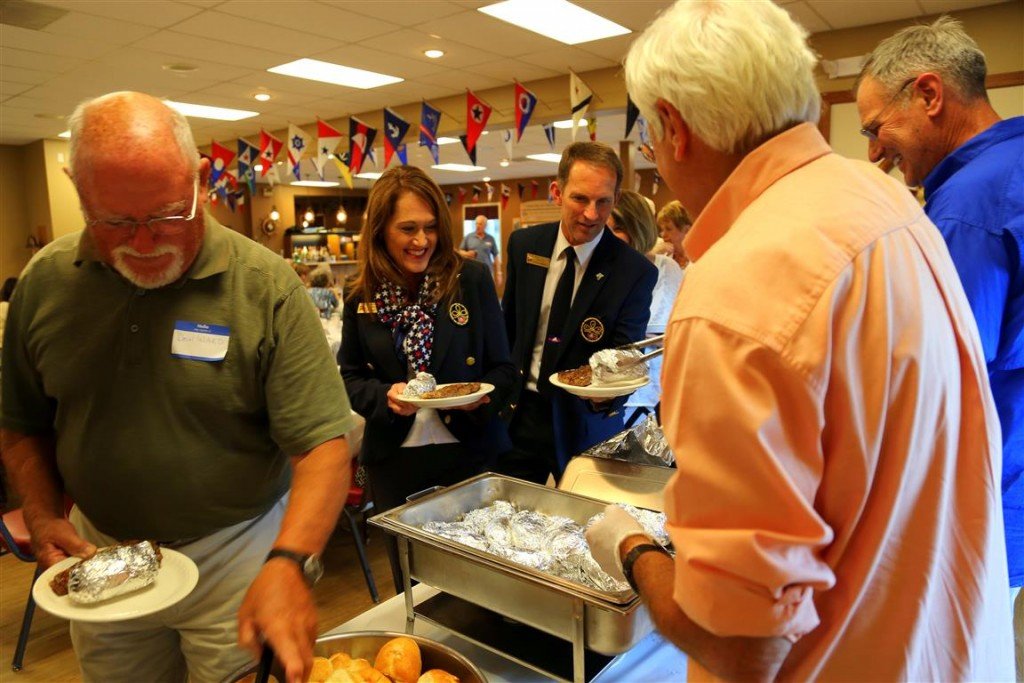 Past Commodore Kevin Baerg, in dark blue blazer, and his wife Cressie, are served dinner by club volunteers at a monthly general meeting.

“We’re not a stuffy yacht club,” Rear Commodore Chris Neely, a middle school math teacher, told the Peninsula Gateway in an article last fall. “There’s so much for everybody and it’s so welcoming.”

Commodore Bobbie Higgins agreed, saying its a great way to meet other boaters and to form an environment of camaraderie.

“(It’s) a very open, friendly club with lots of activities,” she said.

Vice Commodore Debbie Lee pointed out that the club is run by volunteers who work together to bring about the club’s many events and activities. Notable events are the monthly cruises, a decorated boat entry for Seattle’s opening day of yachting season, the Commodore’s Ball and the Christmastime Lighted Boat Parade in the harbor. 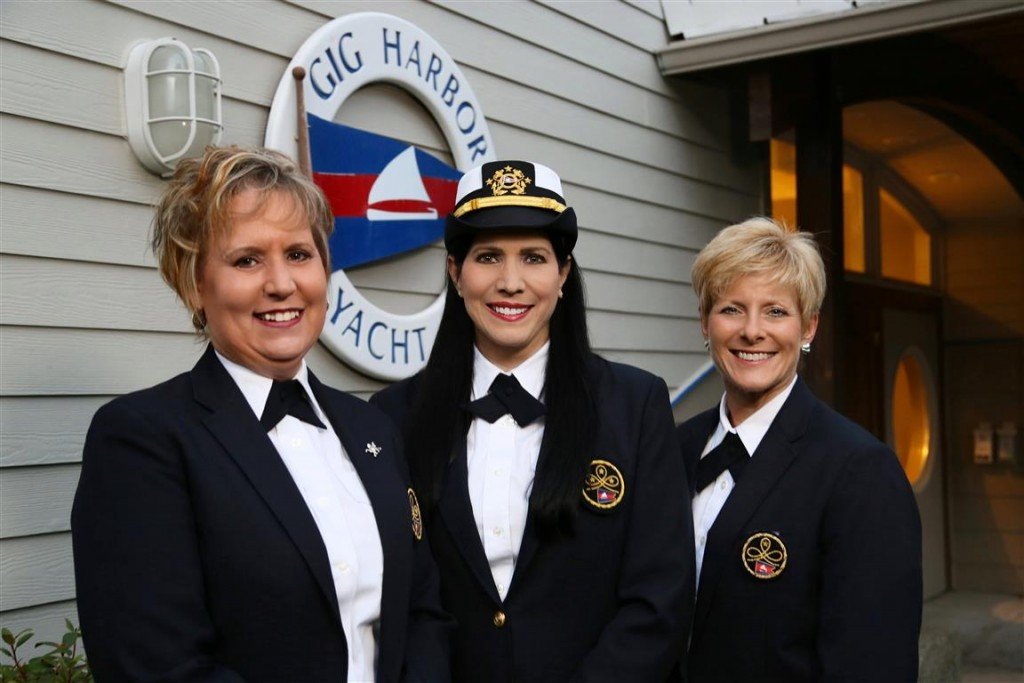 Gig Harbor Yacht Club is unique with its first-ever all-female bridge of officers as seen in this photo by Steve Essig. From left to right are: Vice Commodore Debbie Lee, Commodore Bobbie Higgins and Rear Commodore Chris Neely. 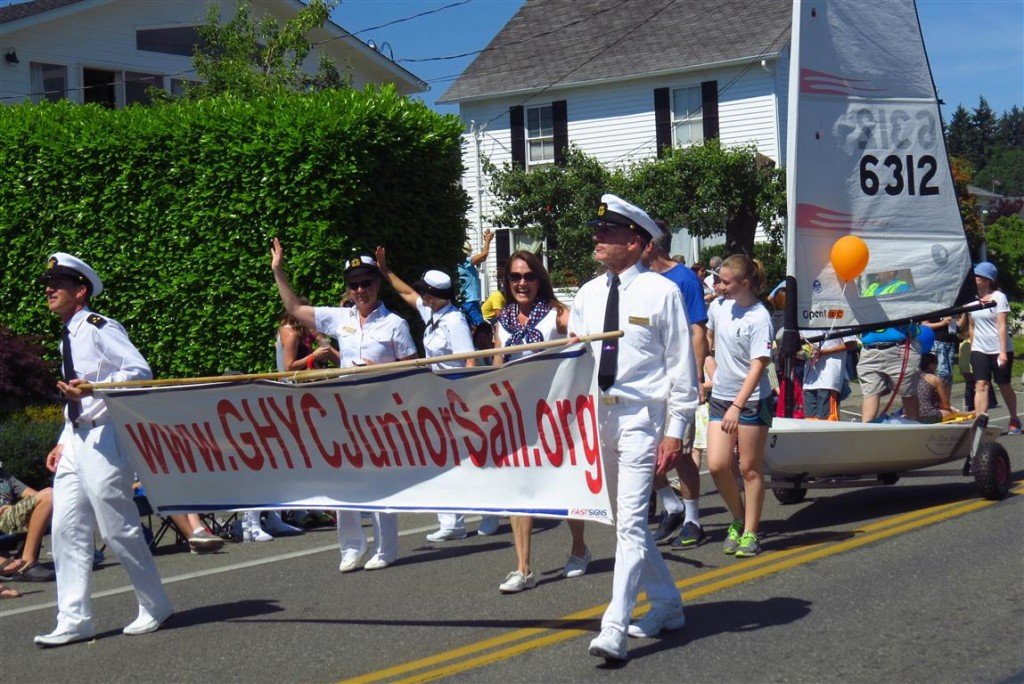 Commodore Higgins, Vice Commodore Lee and Rear Commodore Neely make up the bridge for the year that ends next June. The women, who all happen to be sail-boaters, got involved in the club because it has such a tight-knit, welcoming and just plain fun community of people. It’s a common interest in boating that brought them to the club, but it’s a sense of community that keeps them coming back and investing time in leadership roles, they told the Gateway. 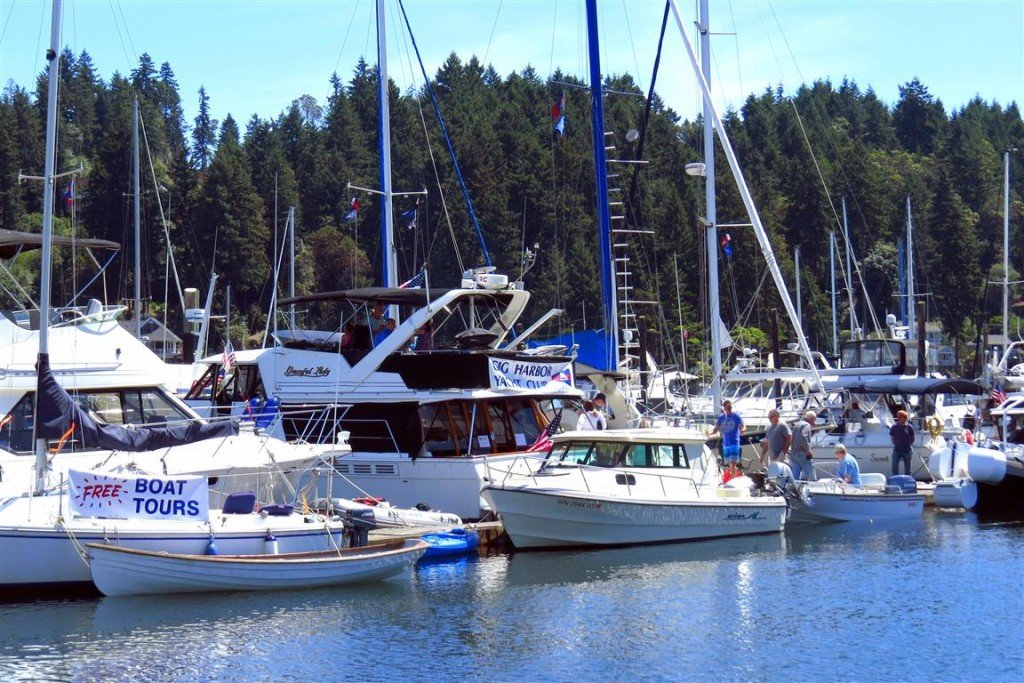 Gig Harbor Yacht Club members open their boats up to public tours on the dock placed near Skansie brothers Park during the Maritime Gig Festival.

“I’m so proud of this town,” Neely told a reporter. “I think that the yacht club is a real asset to the maritime feel the city wants to promote.” 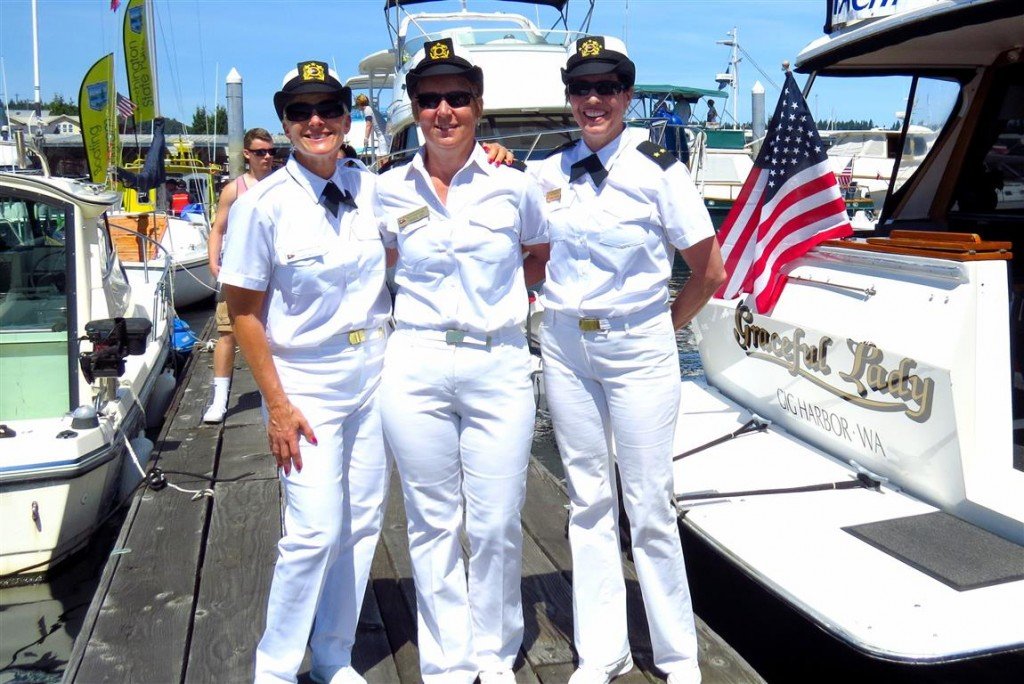 Neely said she eagerly got involved in the club because it felt so open and warm. All of the members welcomed her and her husband into the fold after moving to town about five years ago. It’s a misconception that all yacht clubs are exclusive, say the women in leadership, because in Gig Harbor that is certainly not the case. 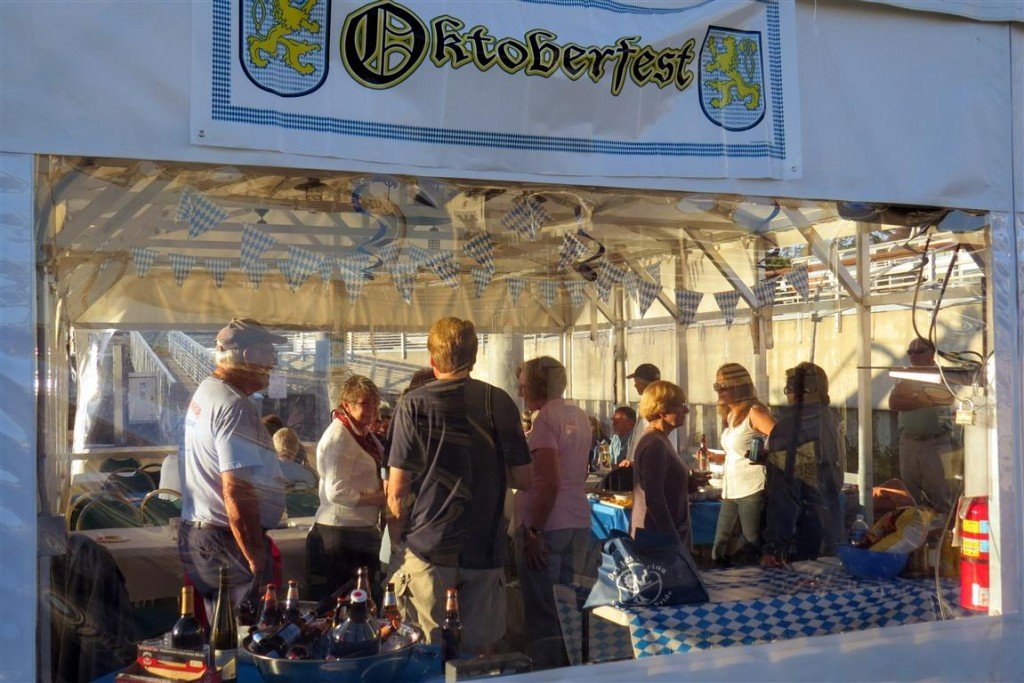 Gig Harbor Yacht Club members enjoy an Oktoberfest dinner during their cruise to the Des Moines Marina in October 2014.

The Gig Harbor Yacht Club happily welcomes new members and it is easy to join. For more information visit the club’s website at Gig Harbor Yacht Club. Interested prospective members can also attend a monthly dinner meeting on the second Wednesday of each month September through June and apply. The yacht club is located at 8209 Stinson Ave., Gig Harbor.