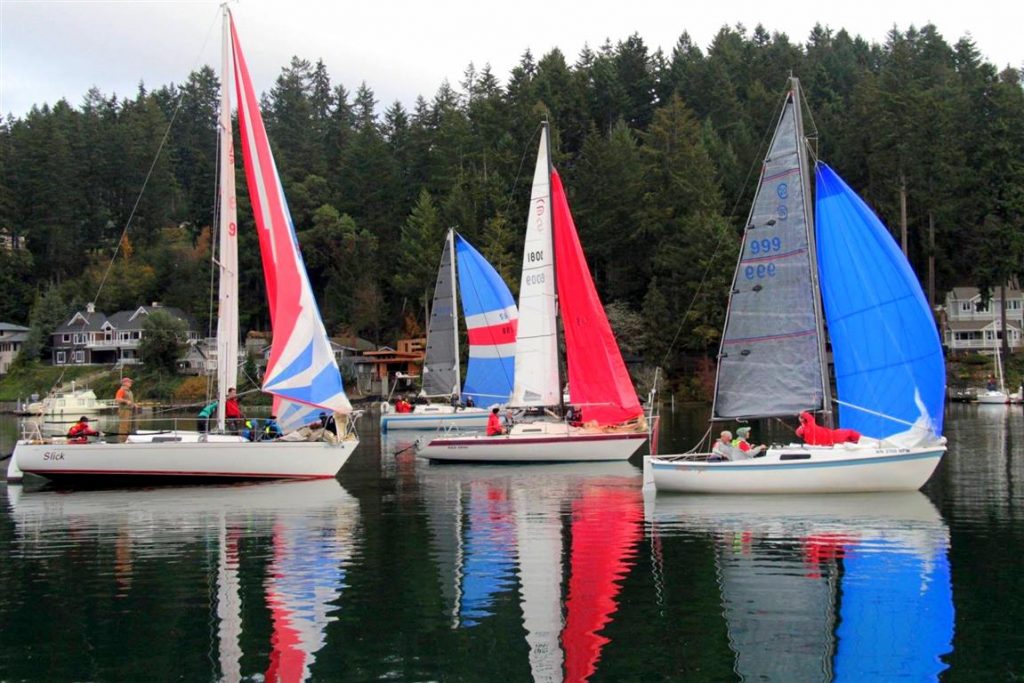 The Gig Harbor Yacht Club’s annual Le Mans sailing race, celebrating its 50th year this fall, sets sail in the harbor on Saturday, Nov. 18. This year, in honor of the event’s golden anniversary, it is bringing back a special twist from the unique race’s early days.

Styled after the famous Le Mans car race in France, the harbor’s sailboat race has always featured an unusual start, in which boats are at anchor in the harbor with sails down and the crew below decks. At the blast of the starting horn, crews scramble topside, hoist sails and dash out the mouth of Gig Harbor.

But this 50th year, just as it was done back when the event began in 1967, the race gets under way with the skippers rowing dinghies from shore to their anchored sailboats. Once the skipper is on board, sails are hoisted and the dash out of the harbor begins — with dinghies towed behind for the entire race. 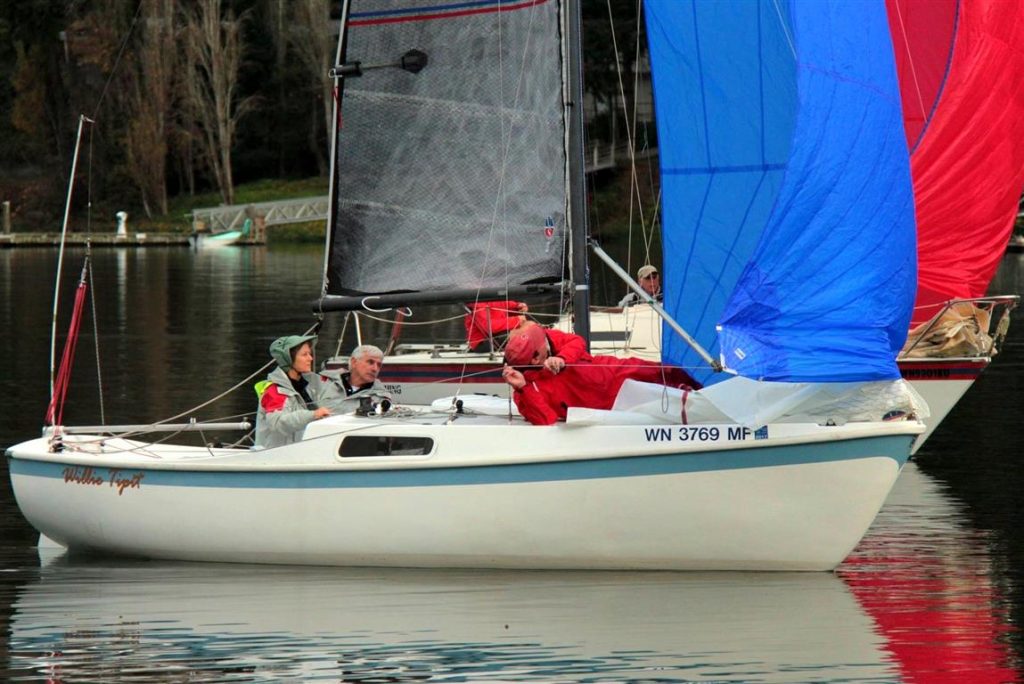 In last year’s Le Mans, Mark Lindeman, yard manager at Gig Harbor Marina & Boatyard (in red on foredeck), checks wind and sail position as “Willie Tipit” heads to the mouth of the harbor. (This and photo at top courtesy of Mark Lindeman.)

That is, a small group of racers who sign up for this special Founder’s Cup class will row out to start the old way, explained Jamie Storkman, veteran sailboat racer and organizer.

“The Founder’s Cup will be its own class of seven to 10 racers who will do the traditional rowing out to the boat,” said Storkman, who has raced the Le Mans for 30-35 years. “It’s a lot of fun to see that.”

Founder’s Cup Racers will Start the Old Way: Skippers Rowing Out to Their Boats

Founder’s Cup racers will start about 30 minutes ahead of the rest of the fleet, he added, in this exciting start that has sailors in a mad scramble to get out of the harbor. The course proceeds up Colvos Passage north of Sunrise Beach — to Point Richmond if the wind is light, or farther north to Olalla if the wind is good — then back to the harbor, explained Mark Lindeman, yard manager at Gig Harbor Marina & Boatyard and avid sailor and racer.

“The whole lure of the Le Mans race is the start,” he said. “In the old days everyone started on the dock and rowed out to their boat.”

Lindeman also explained how the Le Mans has changed its course over the years. For many years it went down the Narrows and around the bridge tower and back. Then, when work started on the second bridge, the course was changed to run north because of too many obstacles with construction under way, he said.

“It was pretty hairy (sailing to the bridge tower) because of trying to sail against the current,” he said. “You had to time your rounding of the tower so you didn’t smash your boat into it.”

“We at the boatyard enjoy being part of this sailing tradition.” – Ron Roark, managing director

This year Ron Roark, boatyard managing director, will serve as a turn boat out on the course in his SAFE Boat 35, MerL’eau.

“This is a historic sailing race in our community,” he said. “We at the boatyard enjoy being part of this sailing tradition.”

It’s a harbor tradition that also holds a special place for Erik Carlson, a member of the Gig Harbor Yacht Club who is helping organize this year’s race. His father, the late Dick Carlson, a past commodore of the yacht club, co-founded the Le Mans race back in 1967. Erik Carlson proudly reminded yacht club members at a meeting this fall that this year’s Le Mans would be the 50th anniversary.

He also shared a link to a 2013 article in Sailing Magazine that explained how his father and a friend, Ed Hoppen, a Pacific Northwest boat builder known for building Thunderbird sailboats, came to start the race. According to the article, the two were sitting around Hoppen’s kitchen table one night “chewing the fat.” It was then that they came up with the idea of running a sailboat race along the same lines as the famed car race in Le Mans, France.

The race took off and 50 years later, it’s still an exciting annual event in the harbor, with as many as 20 to 30 boats rushing toward the 100-foot-wide mouth of Gig Harbor.

“What makes it special is its novelty.” – Jamie Storkman, veteran racer and organizer

“Many places can change or positions be lost and finish orders affected by those that choose to pop a chute in the harbor, or not,” Erik Carlson said in the article.

For Jamie Storkman, who will be racing Pirouette, a classic Thunderbird that he works on at the historic Gig Harbor BoatShop, Le Mans is “just a lot of fun.”

“What makes it special is its novelty,” he said. “It’s just different. And I just love racing out of the harbor. Everyone gets shoved out of the mouth and it’s so exciting.”

There are several places along the waterfront to view the start of the Le Mans on Saturday morning. Come down to Jerisich Public Dock, Skansie Brothers Park or the Maritime Pier. A skipper’s meeting will take place at 9 a.m., with the first start set for 10:30 a.m.

First, be sure to stop by The Trolley @ the Boatyard for a fantastic, hot breakfast by Omar and crew to enjoy while viewing the start.