Unbelievable. After 336 grueling days at sea, an elated Jacob Adoram Hendrickson felt a new sensation under his boat on Saturday: his hull scraping against a sandy beach. On June 8 the former fighter pilot made landfall in Australia, at last making his goal of being the first person to row solo, non-stop and unassisted across the Pacific Ocean.

He set an additional record in the process, the longest Pacific row, when strong southerly winds pushed him to Trinity Beach in Queensland, Australia, instead of Yorkeys Knob, according to his Jacob Adoram Facebook page.

Jacob set out from Neah Bay, Wash., on July 7, 2018, on his extraordinary quest to row, alone, to Cairns, Australia. He thought it might take eight months. It took him 11 months.

We gave him a send-off party here at The Club @ the Boatyard last June and he told us all about his plans and showed us his purpose-built 28-feet rowing vessel, Emerson. It was a supportive, hopeful crowd and everyone wished him well. Still, you couldn’t help but harbor some skepticism: was this really possible? 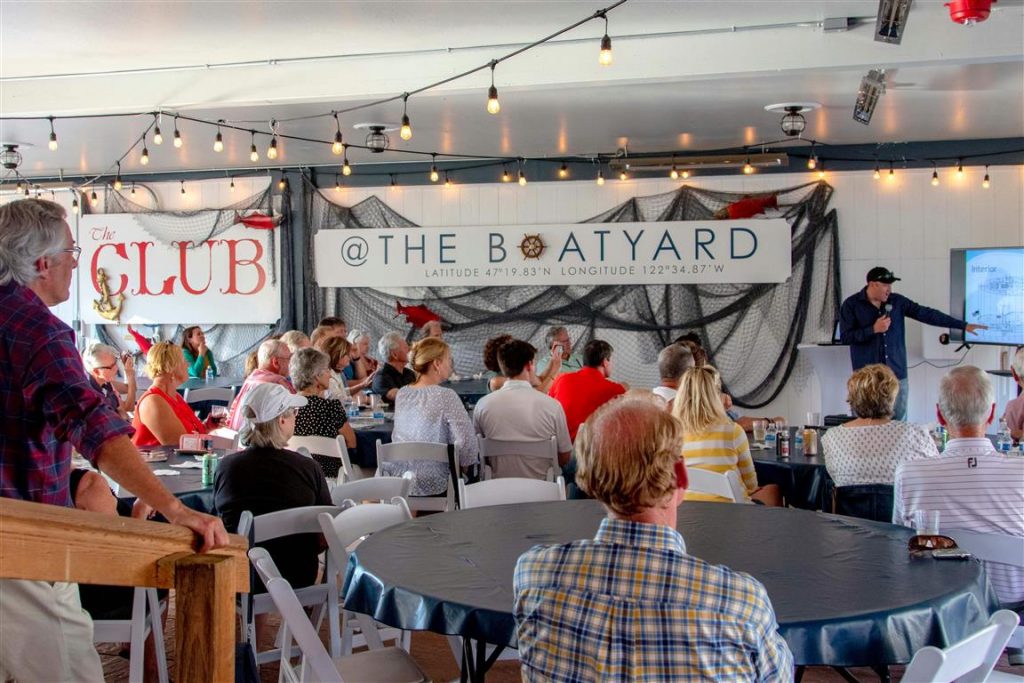 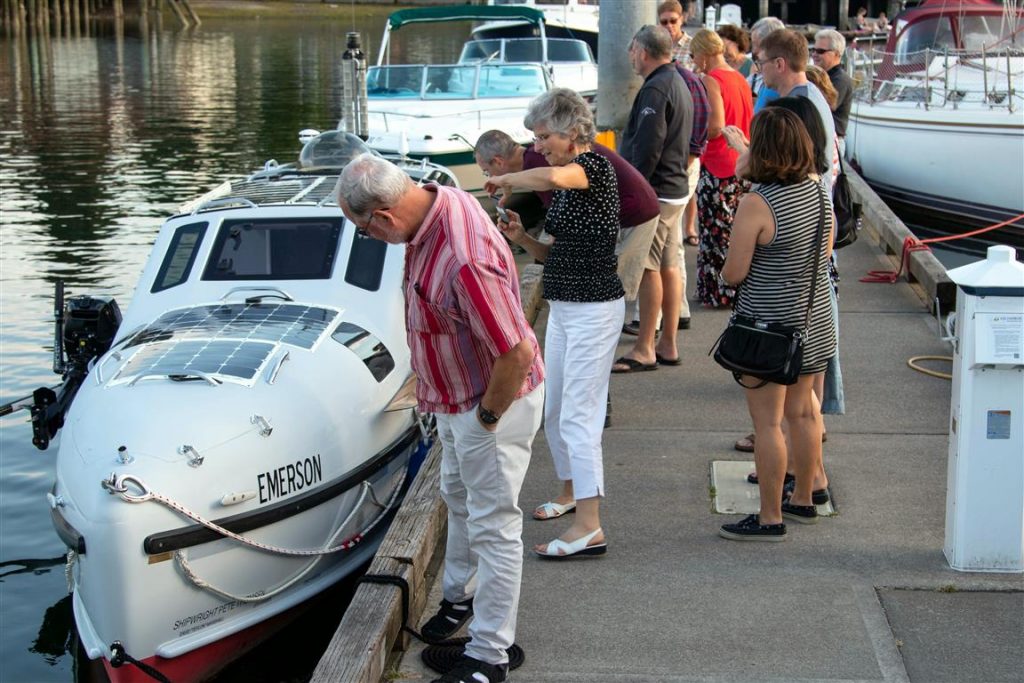 – During his send-off party at The Club @ the Boatyard in June 2018, Jacob points out special features of his purpose-built “rowboat.” Well-wishers then got to look over the vessel themselves out on Gig Harbor’s public dock.

It was and he did it. No crewmate to talk to and to help with the daunting task of rowing for the next eight or so months. No support boats following along as a safety net, just in case. Instead, Jacob covered the estimated 7,145 statute miles by himself, taking a few months longer in the process due to, well, being at the mercy of the world’s largest ocean. 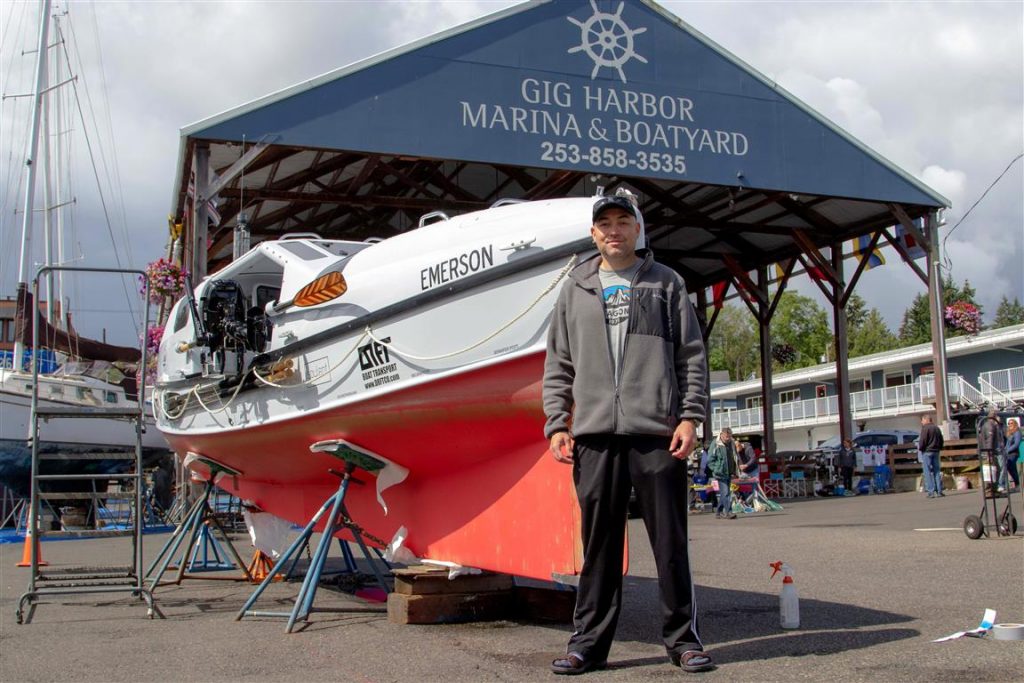 Jacob Hendrickson displayed his rowing vessel at Gig Harbor Marina & Boatyard’s annual Swap Meet in June 2018. He set off across the Pacific a few weeks later on July 7.

He set out last summer expecting the journey to take well over half a year, but just to be on the safe side, he took food for 10 months. Through rationing and successful fishing, Jacob was able to stretch his food supply to the 11 months he ended up taking.

“I feel tired but I feel elated that I’m actually here on land finally.” – Jacob Hendrickson tells a welcoming crowd in Australia. 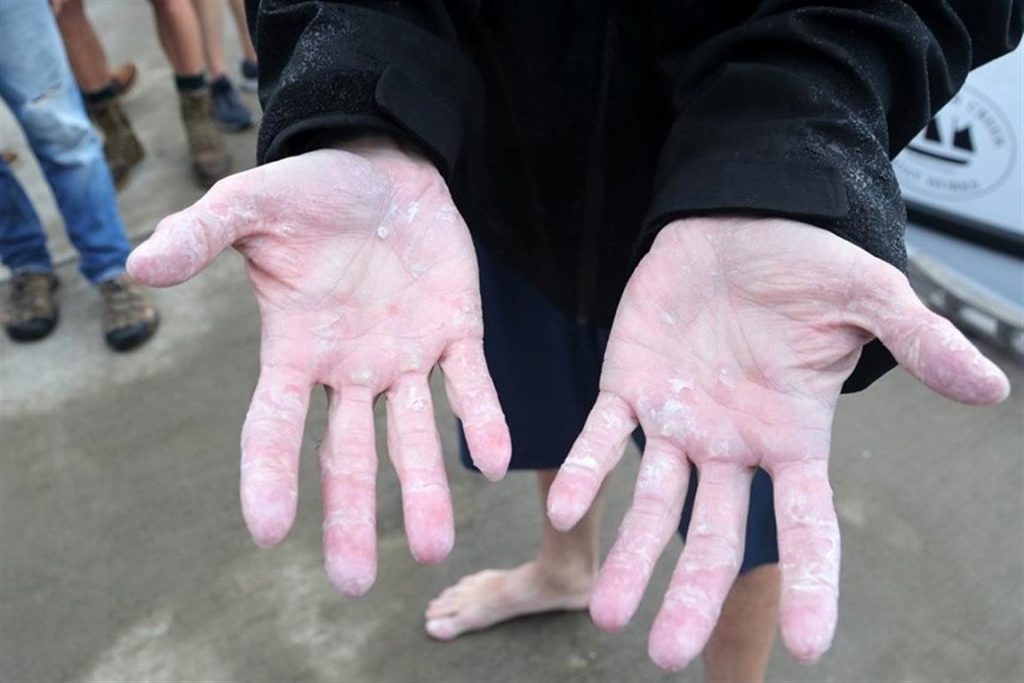 Jacob showed his blistered hands from 11 months of rowing to Australians who greeted him in Queensland. 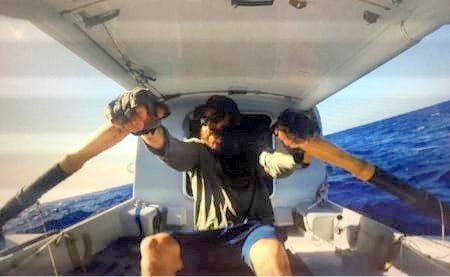 Jacob somewhere in the Pacific around New Year’s Eve.

We’ve been keeping tabs on this amazing guy through his Facebook page, so we knew he was getting close, amazingly. Then, as he neared the Australian coastline this past weekend, he apparently radioed the local volunteer coast guard.

They and several local residents on the beach helped him with what transpired next, as posted by the ABC Far North Broadcasting and Media Production Company on Facebook and then shared on Jacob’s Facebook page.

“American fighter pilot turned adventurer, Jacob Hendrickson, stood on land for the first time in nearly a year after rowing solo from Washington State across the Pacific Ocean to Australia.

“He was meant to arrive at Yorkeys Knob but a strong southerly and rough conditions prevented him from turning into the marina. 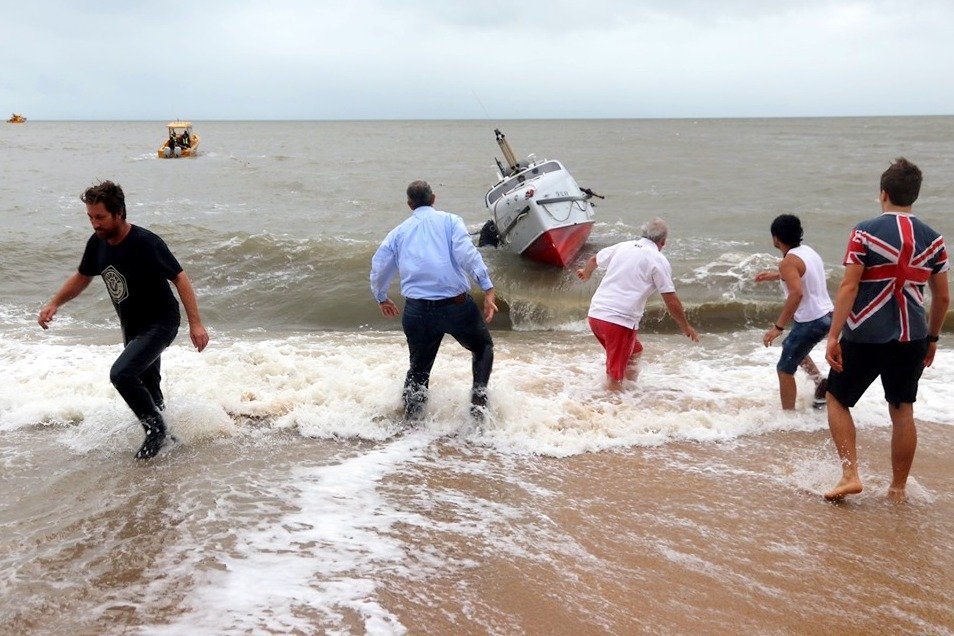 After making landfall at Trinity Beach, Australia, locals helped push Jacob and Emerson back out to be assisted by the local coast guard to a welcome party at Yorkeys Knob.

“He pretty much ‘careened’ onto Trinity Beach instead so he could claim his world record for the longest, non-stop unassisted row across the Pacific.

“Locals then helped push him back out to sea and the Volunteer Coastguard escorted him to Yorkeys Knob where he was cheered by the waiting crowd and greeted by the ‘King of the Knob.’

“Mr. Hendrickson’s hands were covered in blisters and he struggled to remain steady on his sea legs.

“I feel amazing,” said Jacob. “I feel tired but I feel elated that I’m actually here on land finally. It feels so weird on stable ground once again.” 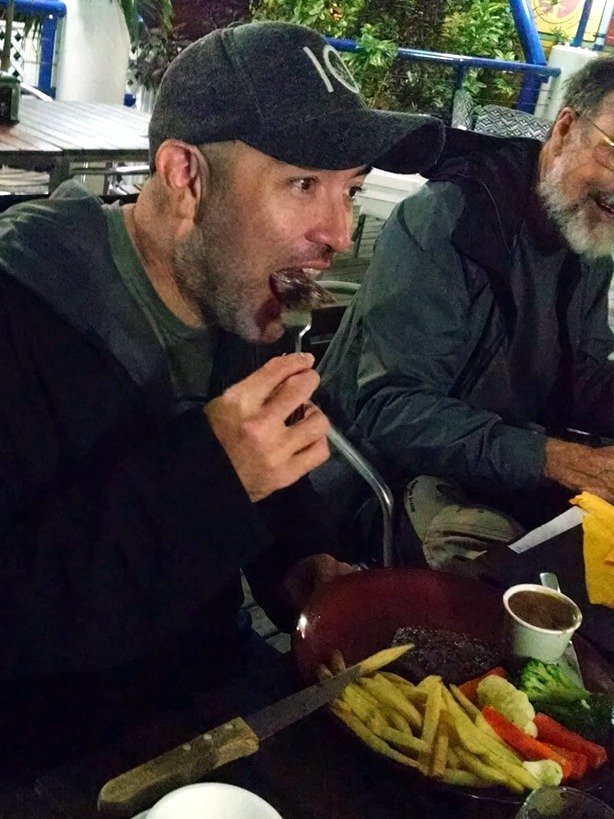 “He said the journey was aimed at raising awareness and funds to help developing countries access clean water, and also figuring out how he wanted to live his life.

“I would say that it was like I was in a weird time vortex that was filled with all kinds of different animals and sea creatures and self reflection and allowed for me to learn more about myself, learn more about the world and help me set a new direction in my life for the future,” he said.

“Mr. Hendrickson said he was looking forward to a hot meal and beers after nearly a year of mainly freeze-dried meals.

And about that first hot meal on land: steak, fries and vegetables. The look on Jacob’s face says it all.

Unbelievable accomplishment, Jacob! Let us know when we can throw a Welcome Home party for you at The Club @ the Boatyard.

Wheels on the Water Car Show