GHYC Junior Sail rode high on a wave of enthusiasm and support at its annual fundraiser last Friday evening, capping the program’s most successful season of summer sail camp and race team yet.

It was the youth sailing program’s fall spaghetti dinner and auction, which raised thousands of dollars in donations needed to keep the growing organization afloat, and to support many student scholarships awarded each year. 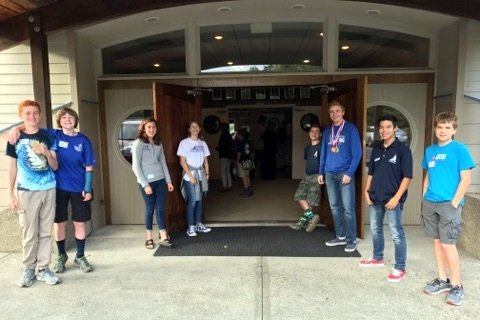 “Thanks to everyone who supported GHYC Junior Sail’s 8th annual dinner auction and made it such an amazing success!” said program director Joan Storkman. “Even more than the money raised at the auction is the tremendous support that Junior Sail felt from our community. We so appreciate the support of this program that — as Kelly Busey (Gig Harbor chief of police and the evening’s emcee) stated — positively impacts the lives of youth who will be able to safely enjoy time on the water. This auction was truly, ‘for the kids!'”

The auction raised enough funds to support more than 13 student scholarships for next summer’s Sail Camp; the silent auction of more than 90 fabulous baskets, gift certificates, merchandise and condo stays raised about $8,000, and the “raise the paddle” live auction to support the purchase of a coach’s safety boat raised $21,000.

Gig Harbor Marina & Boatyard was there as a proud supporter and regular sponsor of the increasingly popular program that offers a high school sail race team and a summer learn-to-sail camp. 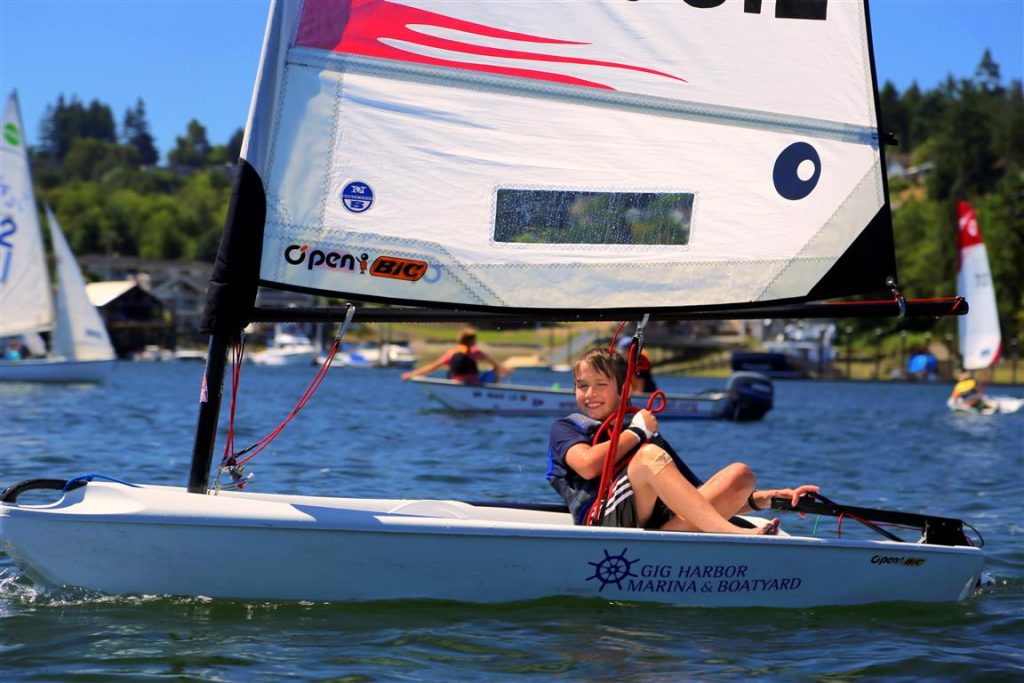 GHYC Junior Sail Camp runs in five-day sessions throughout the summer in Gig Harbor. The program is open to youth ages 6-18 and also offers a competitive and successful Race Team.

“What a great program it is,” said boatyard General Manager Ron Roark who attended the dinner auction with his wife Jui Ling and business partners Ray and Pat Vellinga at the Gig Harbor Yacht Club on Sept. 22. “We support kids in the harbor and it was a successful event for a successful program.”

In fact, GHYC Junior Sail is coming off its most successful summer yet in its eight-year history. The sail Race Team, which formed just a few years ago, qualified for national competition in May, attending the ISSA Fleet Racing High School National Championship at MIT in Boston. It was an enormous accomplishment for the young program and a valuable learning experience to compete on the national stage, said team coaches. 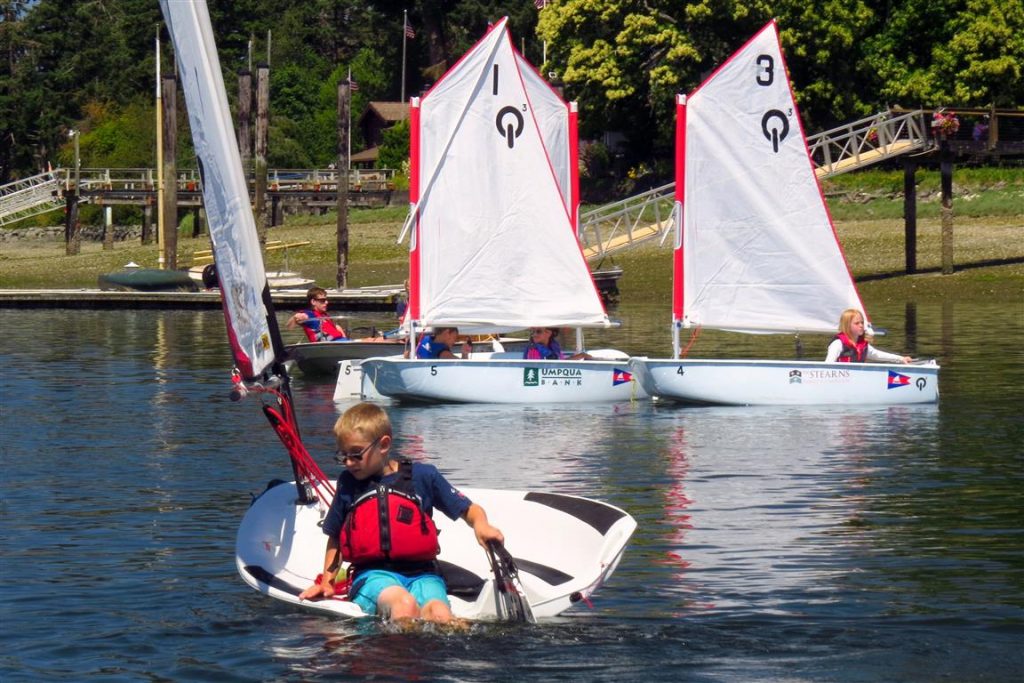 Sail Camp was more popular than ever this summer, with about 60 kids more than past summers signing up for learn-to-sail sessions in the harbor.

Then, this summer the increasingly-popular learn-to-sail program attracted about 60 more sail campers than in past summers, bringing 2017 Sail Camp enrollment to a record 160 kids this season. New this year was a “Guppy” program, opening Sail Camp to younger kids, 6-8 years old, for a fun, easy introduction to sailing. Guppy sail campers are seen with instructors in the photo at the top of this page aboard a Catalina 16.5.

Word is getting out about GHYC Junior Sail, no doubt helped by the highly visible and very appealing fleet of small sailboats seen scooting around the harbor all summer — and most of the year, with Race Team practicing a few days a week. 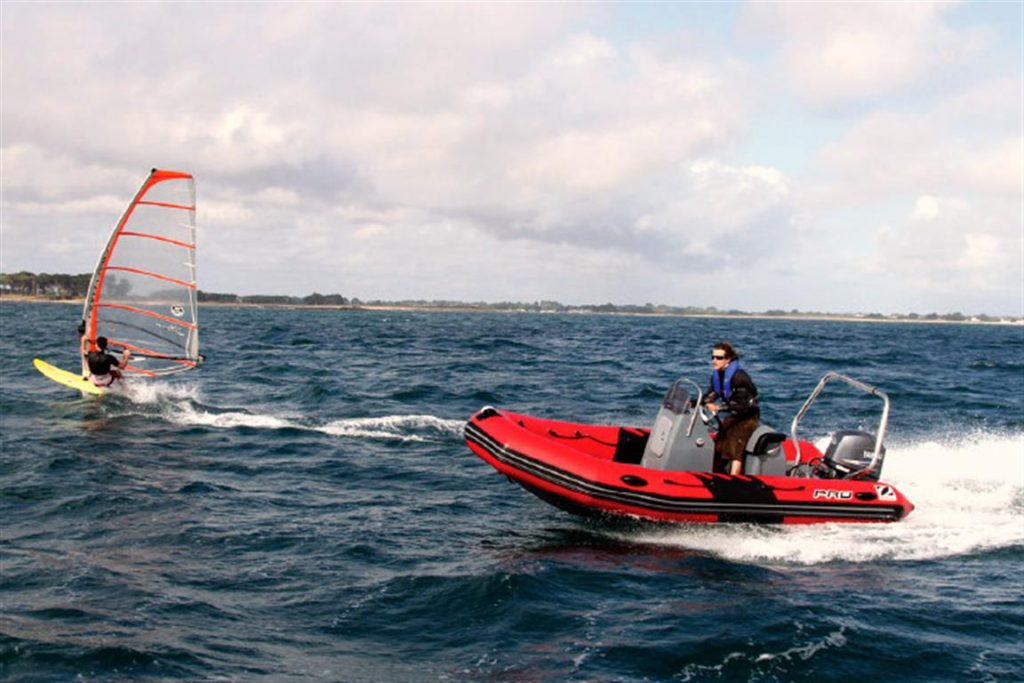 An inflatable RIB coaching boat was the fundraising goal for the annual GHYC Junior Sail auction held last Friday at the Gig Harbor Yacht Club. The inflatable hull is more forgiving than a hard fiberglass hull in frequent student-coach encounters.

This year’s fundraising goal for the Junior Sail auction was for a RIB inflatable coaching boat, as shown in the above photo. Rigid Inflatable Boats (RIBs) reduce damage to boats that are in close proximity with each other in student-coach situations, say Race Team coaches.

GHYC Junior Sail made significant progress toward the goal of purchasing a needed RIB thanks to proceeds raised during the silent and live portions of the auction. Many attendees also generously raised their paddles to donate money for several student scholarships to make Sail Camp accessible to all youth. 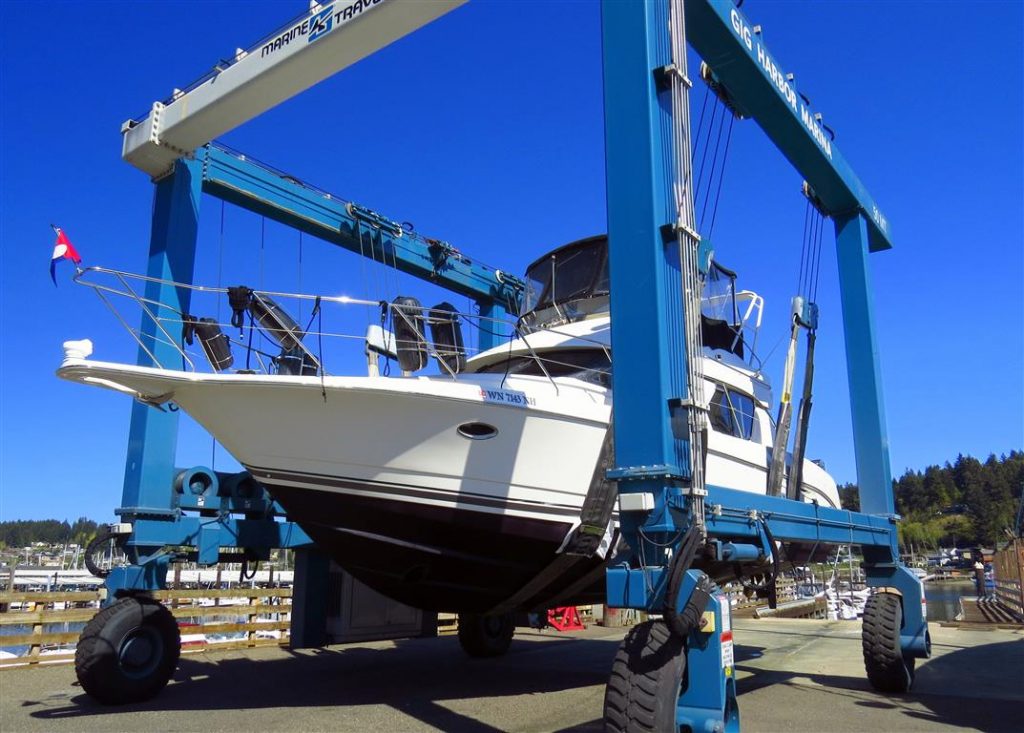 Gig Harbor Marina & Boatyard, always a supporter of youth and community activities, regularly donates a haulout to the GHYC Junior Sail auction — in addition to other regular sponsorship and donations.

Gig Harbor Marina & Boatyard has been a donor and program sponsor for several years, opening The Club @ the Boatyard for harbor regattas and regularly donating dues collected from Club membership. The boatyard also donates a haulout to the auction each year, an item popular with the boating community.

As someone who serves on the board of GHYC Junior Sail, this blogger thanks Gig Harbor Marina & Boatyard and our other sponsors for their ongoing support of this healthy, dynamic activity for area youth. The program teaches important water safety and boating skills, an appreciation of the marine environment we live in and a life-long love of boating recreation.

Read more here about GHYC Junior Sail, being a sponsor — and getting your business’ name on the side of our BICs, Optis and FJ’s — signing up for Race Team or Sail Camp, or making a donation to the program.