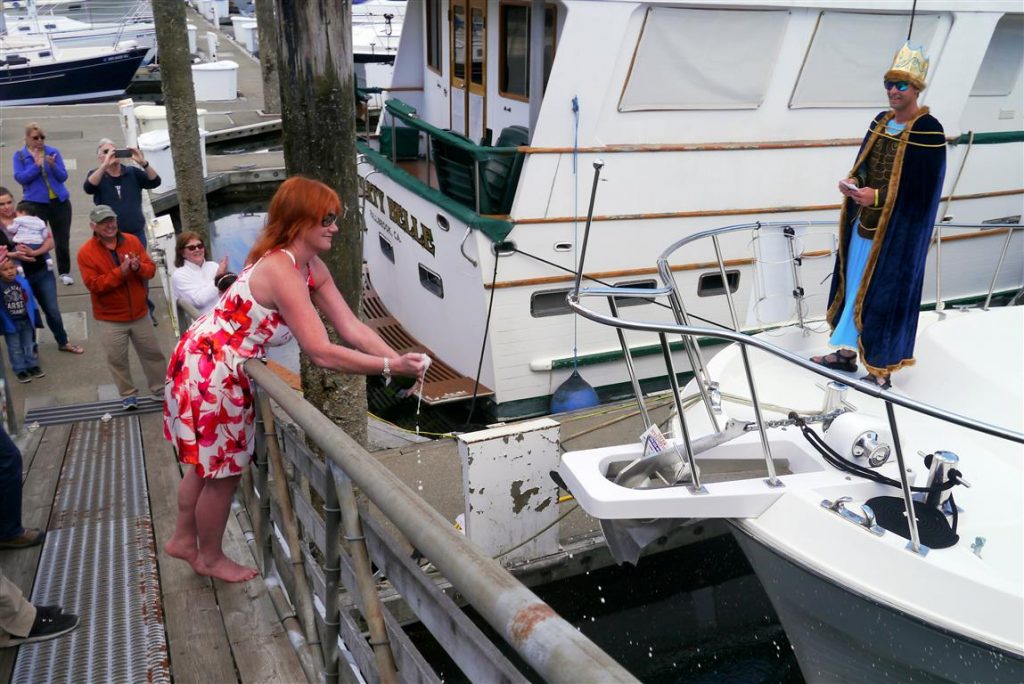 The gods were smiling down on us from Mt. Olympus last Saturday. But better than that, King Neptune himself joined us in the marina for the renaming ceremony of our guest yacht, Suite Dreams.

It was all part of a day of fun at Gig Harbor Marina & Boatyard on National Marina Day, June 10, with our annual swap meet, musical entertainment by Sweet Mary and amazing hot dogs by Hot Diggity Dogs & Sausages. 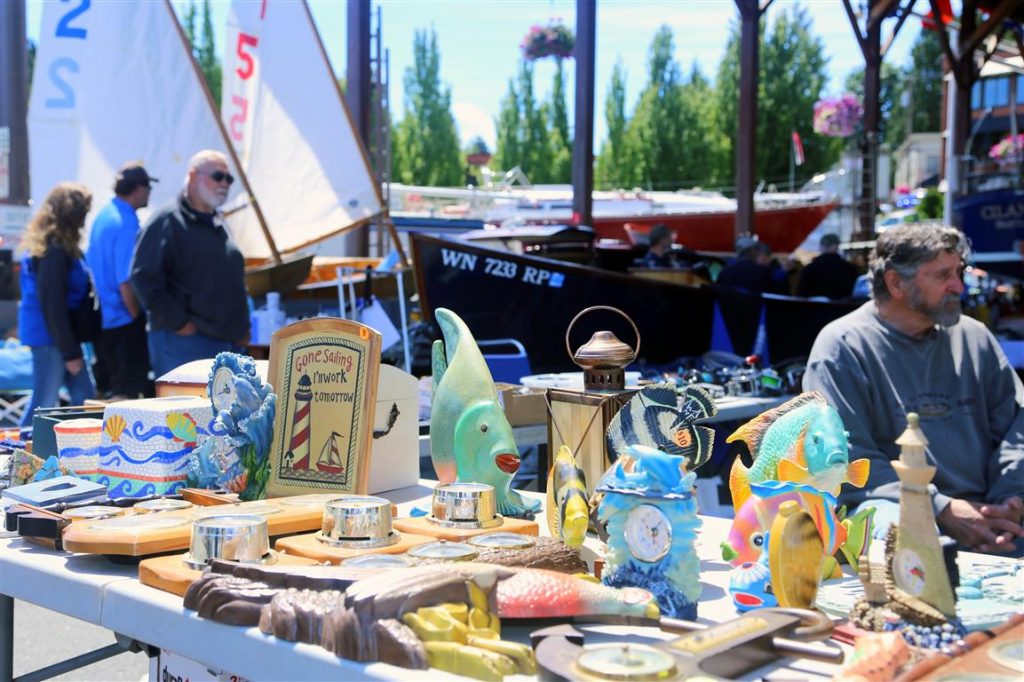 About 15 vendors set up their nautical wares at the boatyard’s third annual swap meet on National Marina Day, June 10.

In the afternoon, the action moved down the ramp to B Dock for the “denaming” and then renaming ceremony of our of popular “Fleet Suite” guest yacht, formerly known as the White Lion.

Savvy to all things boating that we are, we knew there were rules to follow to keep the gods happy in renaming a boat. King Neptune, the Roman god of the sea, gets a little testy if these things aren’t done by the book — after all, he keeps all boat names officially recorded in his Ledger of the Deep.

So, in a very nautically-correct ceremony to appease the fussy sea gods, we called upon King Neptune himself — a.k.a., boatwright/rigger Lenny Mason — to rechristen our guest yacht. 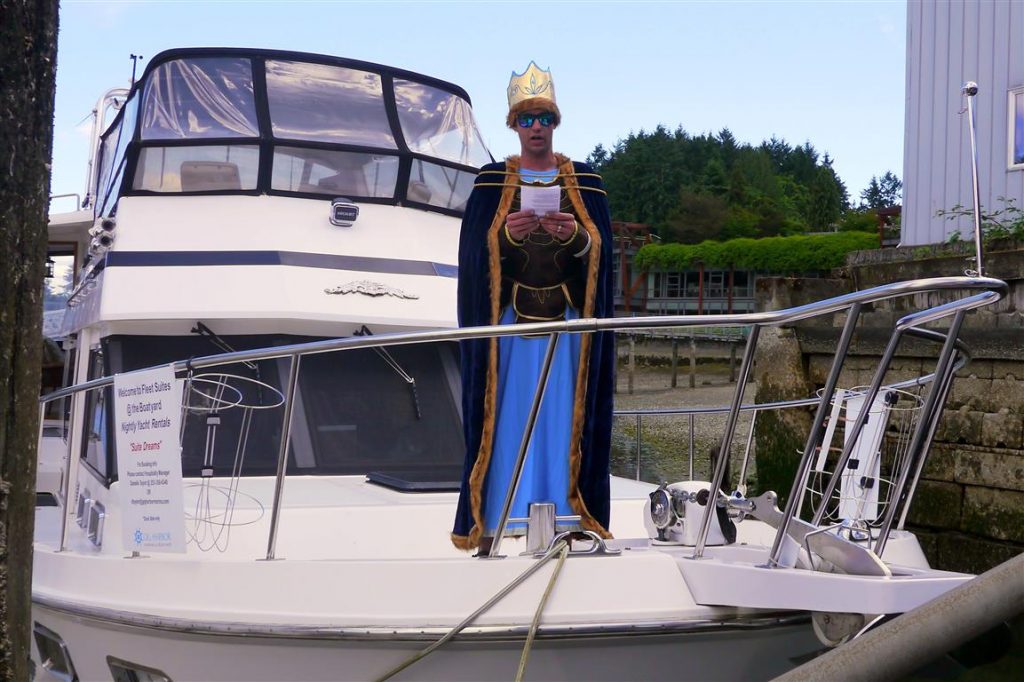 Intoned the mighty sunglasses-wearing sea god from the fore deck of the Ponderosa 42:

Mighty Neptune, king of all that moves in or on the waves, and mighty Aeolus, guardian of the winds and all that blows before them: we offer you our thanks for the protection you have afforded this vessel in the past. We voice our gratitude that she has always found shelter from tempest and storm and enjoyed safe passage to port.

Now, wherefore, we submit this supplication, that the name whereby this vessel has hitherto been known, White Lion, be struck and removed from your records.

Further, we ask that when this vessel is again presented for blessing with another name, she shall be recognized and shall be accorded once again the selfsame privileges she previously enjoyed.

In return for which, we rededicate this vessel to thy domain in full knowledge that she shall be subject to the immutable laws of the gods of the wind and the sea.

In consequence whereof, and in good faith, we seal this pact with a libation offered according to the hallowed ritual of the sea.”

Then, boatyard hospitality manager Danielle Taylor stepped up the ramp to spray champagne at the bow of the guest yacht — narrowly missing King Neptune with the shooting cork.

Neptune, after dodging the cork, continued:

“I name this ship Suite Dreams. May she bring fair winds, safe passages, and good fortune to all who sail on her.” 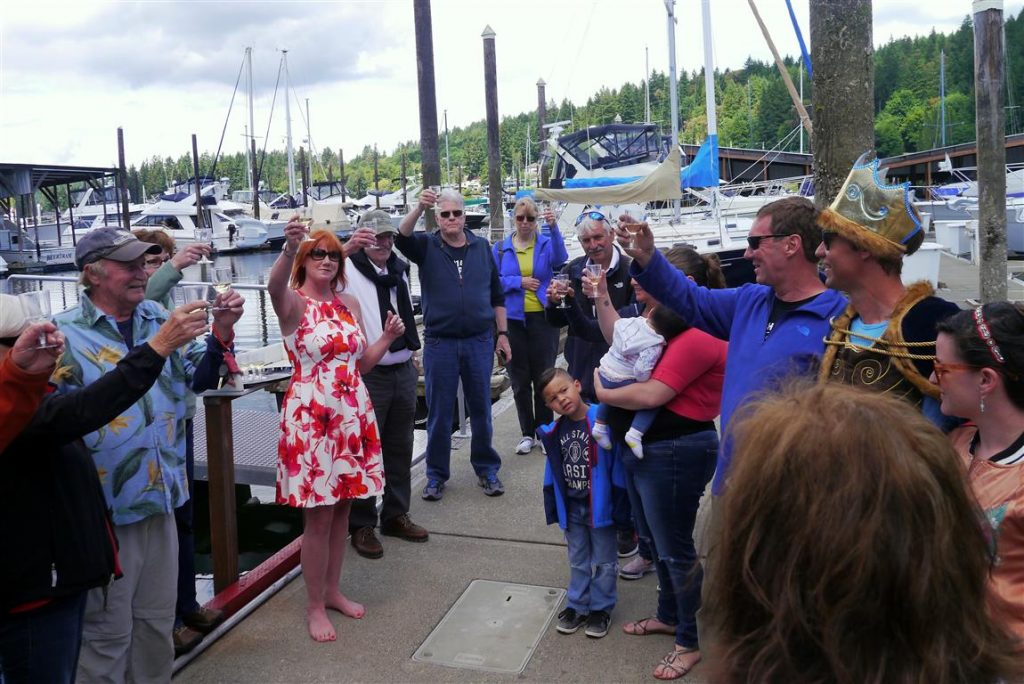 So, the gods of the sea are appeased and it’s only peaceful days and tranquil nights aboard Suite Dreams — which stays moored in the marina, by the way, but why tempts the Fates? Read more and plan your peaceful stay on Suite Dreams at Fleet Suites @ the Boatyard.

“Many thanks to Lenny,” said boatyard general manager Ron Roark. “He did a great job as King Neptune.”

It was all part of a fun day of fun on National Marina Day at Gig Harbor Marina & Boatyard. About 15 vendors set up to sell their boating and nautical wares on the hard, and some 200 people came through to browse and shop, said Mark Lindeman, boatyard manager. 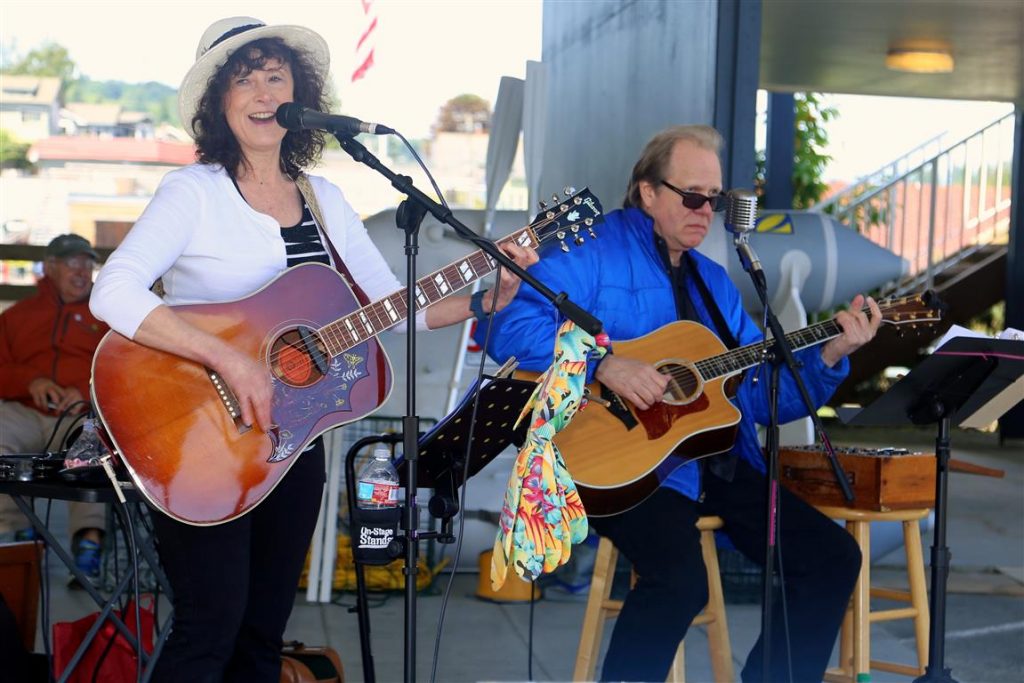 “People were waiting at 8 a.m.,” he said. “I couldn’t have been happier with the addition this year of food by the hot dog lady, Hot Diggity Dogs, and music by Sweet Mary. They played just the right music with songs everyone knows.”