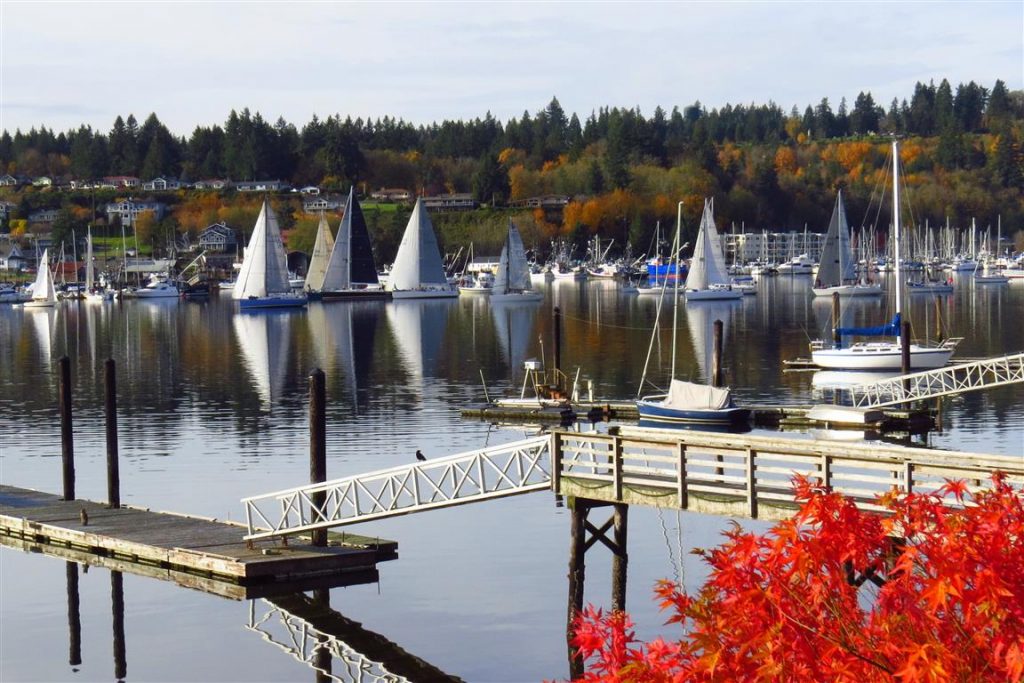 The morning dawned clear and rainless for the 50th annual Le Mans sailboat race, a promising outlook for a November day on the sound. Now if Mother Nature had only been a bit more giving with filling the sails, it would have rounded out a perfect day for the race’s golden anniversary. 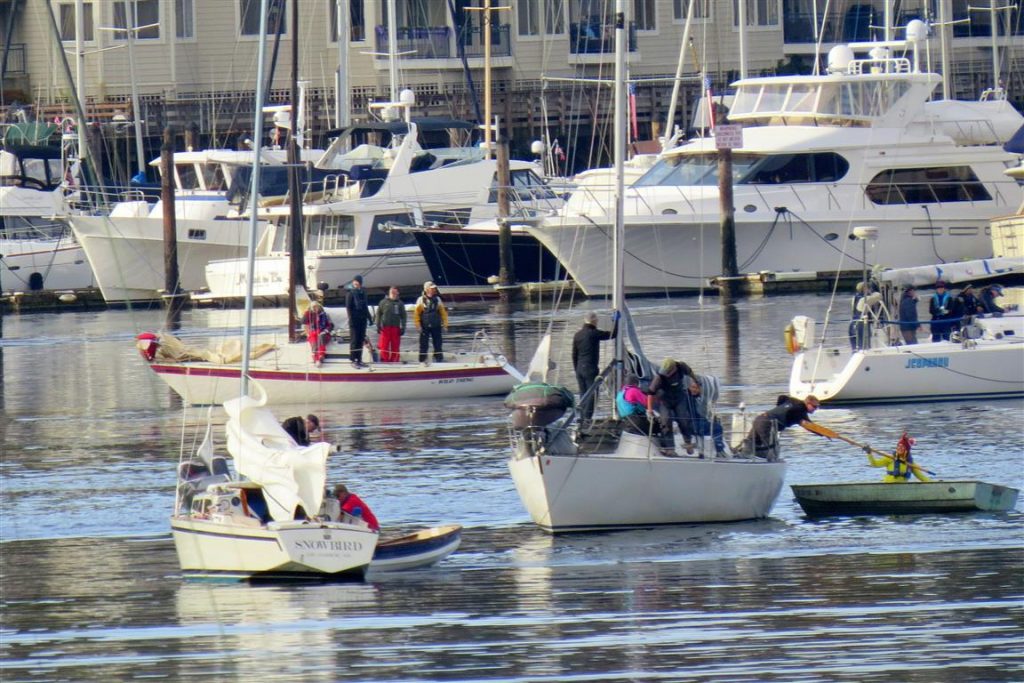 Le Mans racers participate in the Founder’s Cup class, which calls for skippers to row a dinghy out to their anchored boat to start the race.

Even so, skippers and crew enjoyed being part of the harbor’s historic race, which got its start in 1967 and has been run every year since, with a few changes in course and unique ways of starting along the way. (See previous blog at Le Mans Celebrates 50 Years.) In honor of the race’s 50th anniversary a handful of Founder’s Cup sailors got things going in the manner that the race started back in the day, with skippers furiously rowing dinghies out to their boats waiting at anchor.

Rather than rowing from a dock as they did in the old days, racers this year nestled their dinghies next to the hull of the Veteran, Gig Harbor Boat Shop’s beautifully restored purse seiner that sat anchored broadside in the harbor as a kind of floating starting block. The classic fishing boat, launched in 1926 from Skansie Shipbuilding Company, now Gig Harbor Marina & Boatyard, was the perfect historic touch for the Le Mans’ Founder’s Cup class of seven or so racers, followed by two other classes starting at 30- and then 15-minute intervals.

Le Mans Sailboats a Beautiful Sight in the Harbor 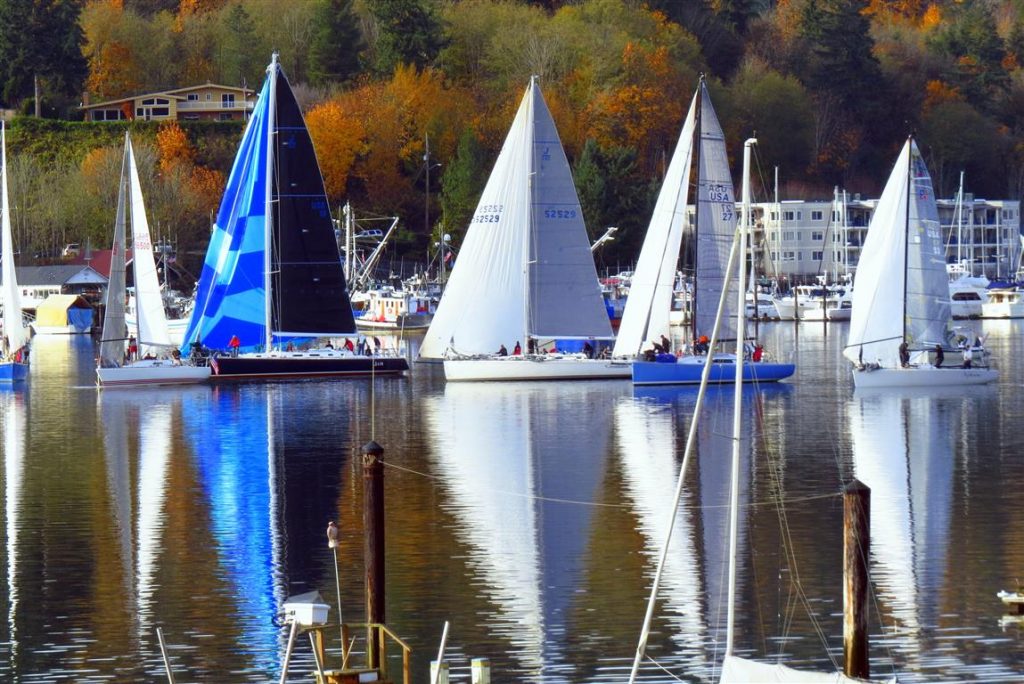 Reflections of Le Mans 2017: a beautiful but too-calm day made a slow day of sailing out of the harbor.

The intervals were needed, although still weren’t long enough for earlier starting boats to have cleared the starting area. With barely a puff of air allowing even a flutter of sailcloth, the fleet of nearly 30 sailboats persevered to the mouth of the harbor — in record long time of well over an hour — and then up Colvos Passage for a brutally slow slog toward Point Richmond. 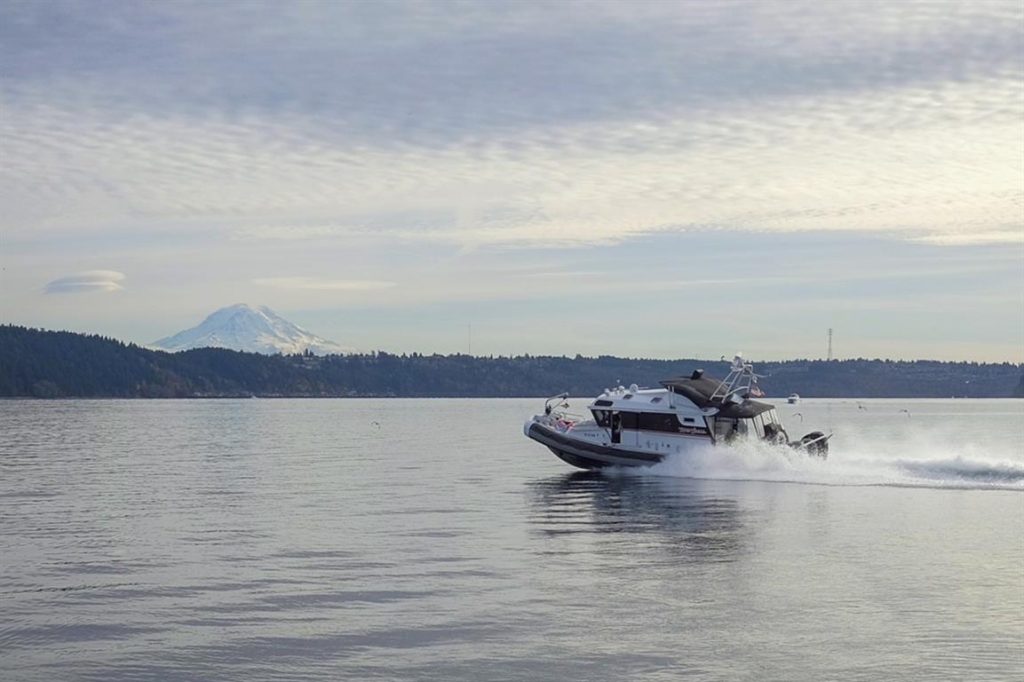 Gig Harbor Yacht Club’s annual Le Mans race offered scenic, calm views of the sound if not ideal sailing conditions. Gig Harbor Marina & Boatyard Managing Director Ron Roark and his SAFE boat MerL’eau served as the turn boat across from Point Richmond. (Photo courtesy of Shaun O’Berry on the Veteran.)Race officials on the committee boat, mercifully, made the decision to go with the race’s short course after sizing up the mill pond conditions out in the sound. They set the turn boat across from Point Richmond, about five miles from the harbor, rather than farther north at Olalla. Then, the already four-hour race was curtailed even further by re-designating the turn mark as the finish line, allowing sailors to motor back to the harbor instead of having to finish there under sail.

Still, any day on the water is a good day as far as sailors are concerned, and they enjoyed sharing tales of their sails over dinner back at the yacht club.