Jacob Adoram Hendrickson to row from Neah Bay to Australia

American Jacob Adoram Hendrickson is on a mission to set the world record for longest unsupported solo ocean row, beginning on July 7, 2018. He will start in Neah Bay, Wash., with the goal of finishing his journey in Cairns, Australia.

“The route will traverse the Pacific across 7,145 statute miles of open ocean, making it the longest solo, non-stop attempt from North America in the history of modern ocean rowing,” according to his website. 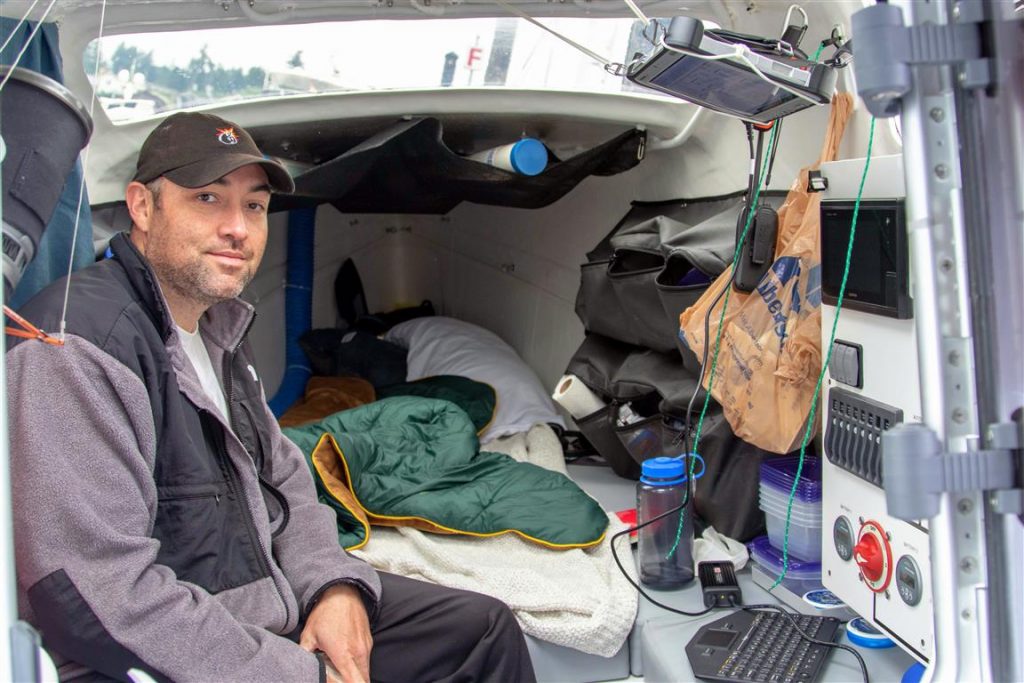 Hendrickson, a former fighter pilot and walk-on as a defensive back for the United States Air Force Academy football team, is not out to make a political statement, but rather is on a mission of self and world exploration.

“I was a pilot, so I have the flying part figured out,” said the military veteran, who flew more than 170 combat missions in his Air Force career. “I rode my bike across the country, so I have experienced land. It seemed the next step was understanding what life was like on the ocean.” 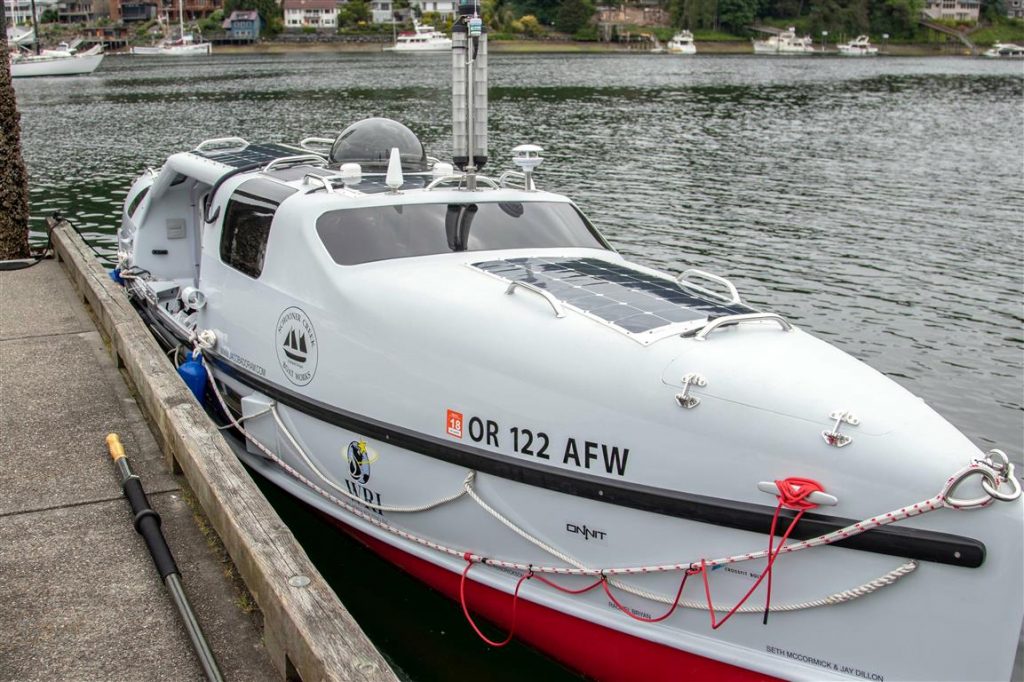 Emerson, which recently tied up for a visit in Gig Harbor, weighs 2,590 pounds without its consumables on board. Its purpose-built design features a hard top over the rowing station and a bubble window that will allow Hendrickson to stand up when looking out.

To tackle the longest solo non-stop row from North America to Australia, Hendrickson says he will need to average 30 nautical miles per day, which is quite a feat, considering the boat will weigh over 3,000 pounds fully stocked when he leaves Neah Bay.

Hendrickson will be rowing Emerson, his specially built, 28-foot carbon fiber and foam core craft with a beam of five feet. 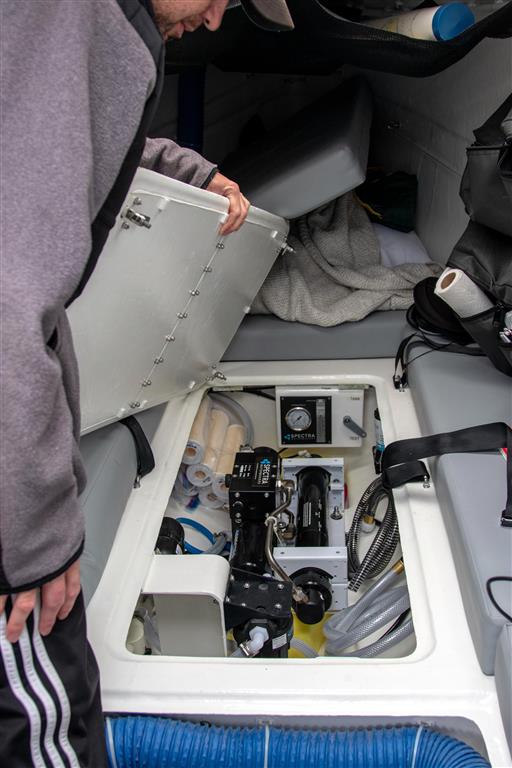 Hendrickson lifts the lid to view the pump and filter that will provide him with fresh drinking water during his voyage.

On board, Hendrickson plans to have around 850 pounds of food, which he estimates will last him 10 months. Clean drinking water on board will be pumped into two 12-gallon fresh water tanks through the process of reverse osmosis. Hendrickson has partnered with Water Mission, which works to build safe water solutions that break through the global water crisis.

An official media day with Hendrickson and his boat will be held from 9 a.m. to 1 p.m. on June 9 at Gig Harbor Marina & Boatyard during the yard’s annual Swap Meet.

Hendrickson will also hold a fundraiser at The Club @ the Boatyard on June 19 from 6-9 p.m. where you can donate to Jacob’s cause and find more information on Water Mission. More details will be provided on gigharbormarina.com leading up to the event.

Emerson is equipped with satellite technology that will help Hendrickson tell his story during his trans-Pacific trek through his blog and social media.

Adventurous Spirit Leads to Goal of Rowing Across the Pacific Ocean. 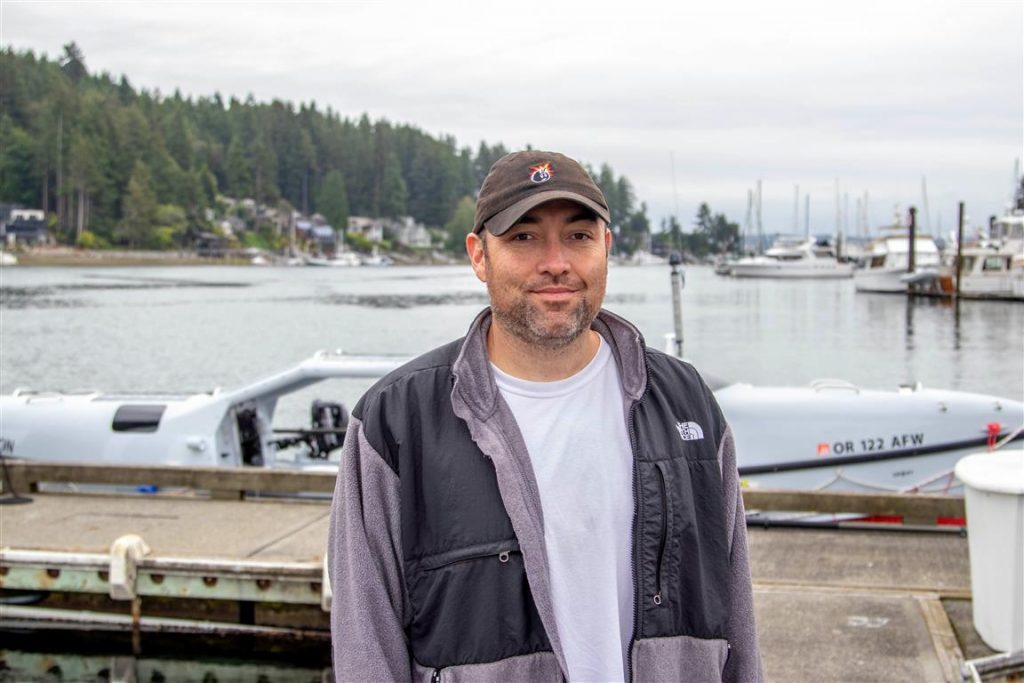 Jacob Adoram Hendrickson on a recent visit to Gig Harbor. He’ll be at The Club @ the Boatyard on June 19. (Photos by Chance Busey)

Like Loading...
Posted in Blog, Events and tagged Club @ the Boatyard Holds Fundraiser for Trans-Pacific Row, Man to Row Across the Pacific, Man to row from Washington to Australia, Rowing the Pacific
← Maritime Gig 2018: Weekend Review in PhotosSwap Meet, Music & Fun @ the Boatyard →