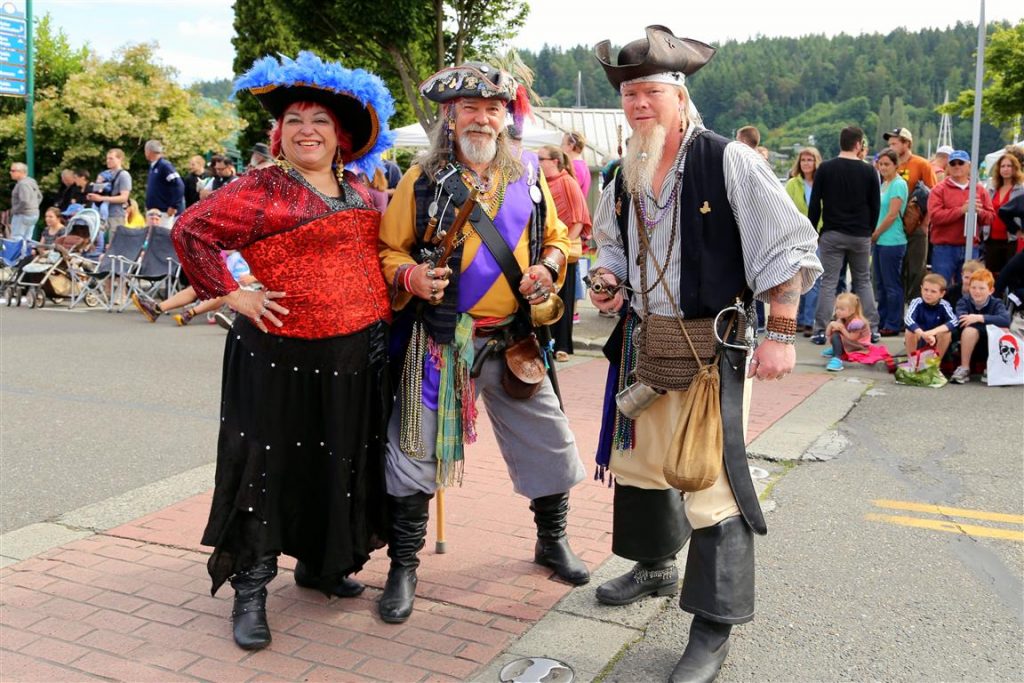 Ahoy, me hearties! Are ye ready for a rollicking good time? Shiver me timbers, then ye landlubbers and sea dogs are in luck: The Maritime Gig Festival sails into town June 4-5 on the Gig Harbor waterfront. Avast and be ready for blimey pirates, grub aplenty and lots o’ great fun in the harbor. 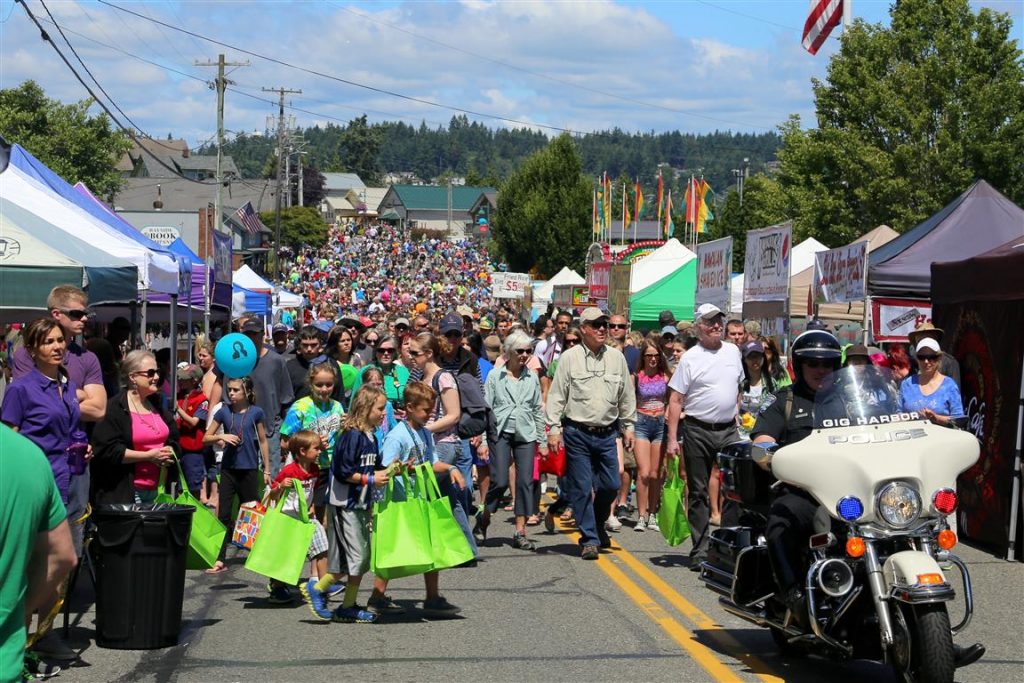 The annual Maritime Gig Festival is Gig Harbor’s premiere summer event. Thar be fun for lads and lasses of all ages.

Shiver me timbers, Maritime Gig Fest Coming to the Harbor

Aaarrgghh, the annual Maritime Gig Festival, sponsored by the Gig Harbor Chamber of Commerce, gets under way this Saturday, June 4, with festivities taking place along Harborview Drive in the heart of downtown, in Skansie Brothers Park and out on the Jerisich Public Dock. This beloved festival is full of favorite family traditions, so weigh anchor, mateys, and come on down for the fun. Check out the Maritime Gig Fest schedule of events for all the details. 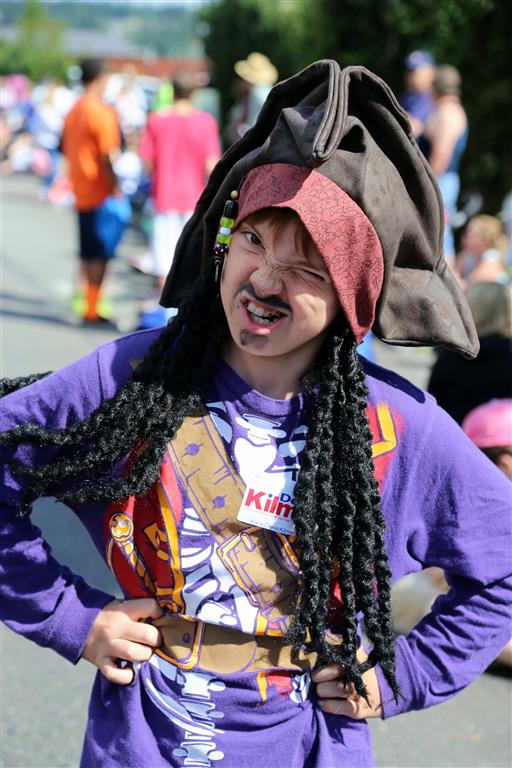 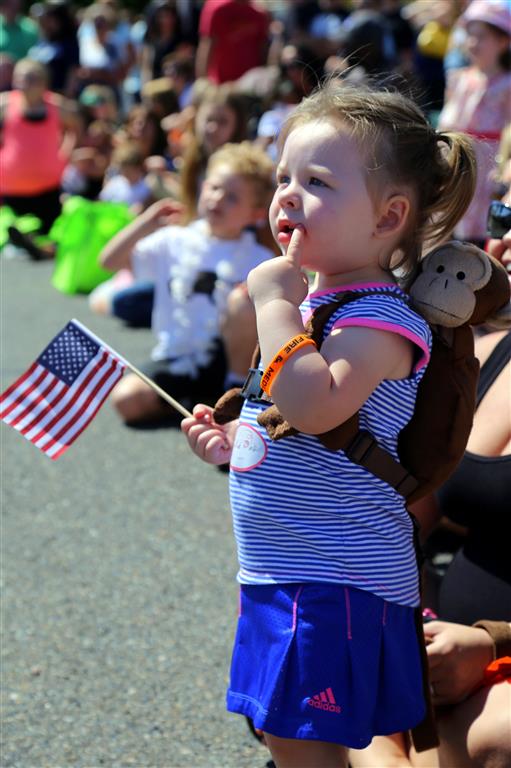 After the Kiwanis pancake breakfast and the Family Fun Run, the Yo Ho Grand Parade sets sail down Harborview Drive Saturday at 10 a.m. Then gangway, all ye buccaneers, for a full slate of festivities taking place all day and again on Sunday next to Gig Harbor Marina & Boatyard. Stop by our red food trolley, JW & the Boatyard, and grab some grub, then stroll among the booths in the park and along Harborview Drive. 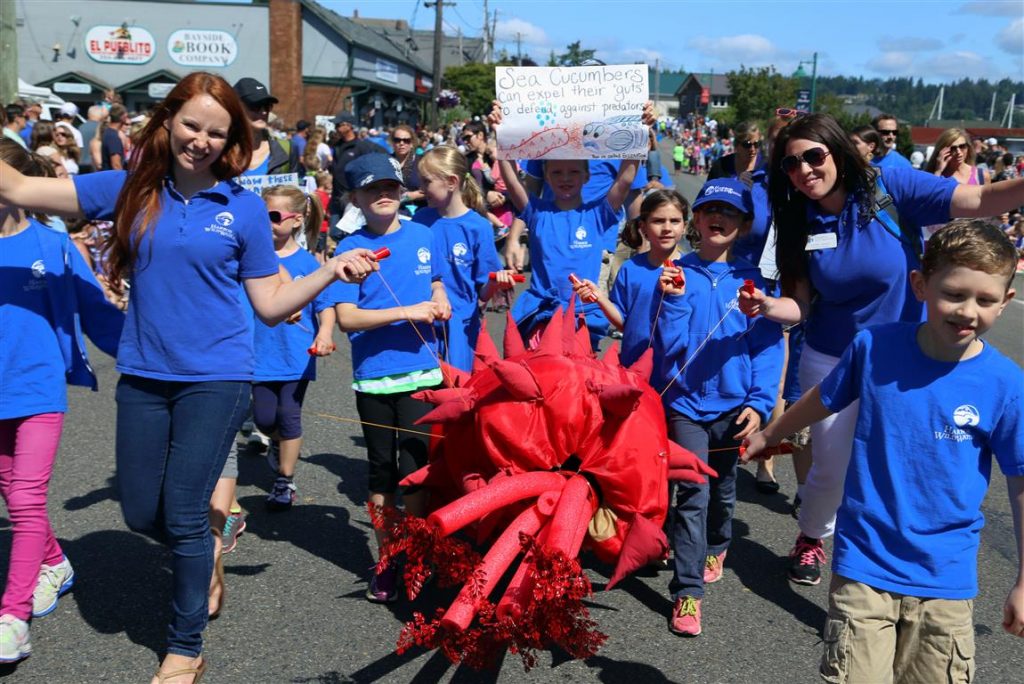 Harbor WildWatch is a perennial favorite in Saturday’s Yo Ho Grand Parade. They are seen here parading with a giant sea cucumber a few years ago.

New this year will be a fun and entertaining Maritime Gig Kids performance area in the intersection of Harborview and Pioneer.  As the name implies, a variety of children’s groups from all over Gig Harbor will perform.  You can expect to see performances from singing and dancing to cheerleading and karate. Also, making its debut during the Gig Fest this year is a sustainable and contemporary ‘Tiny Home’ from Brett Marlo Design and Build. 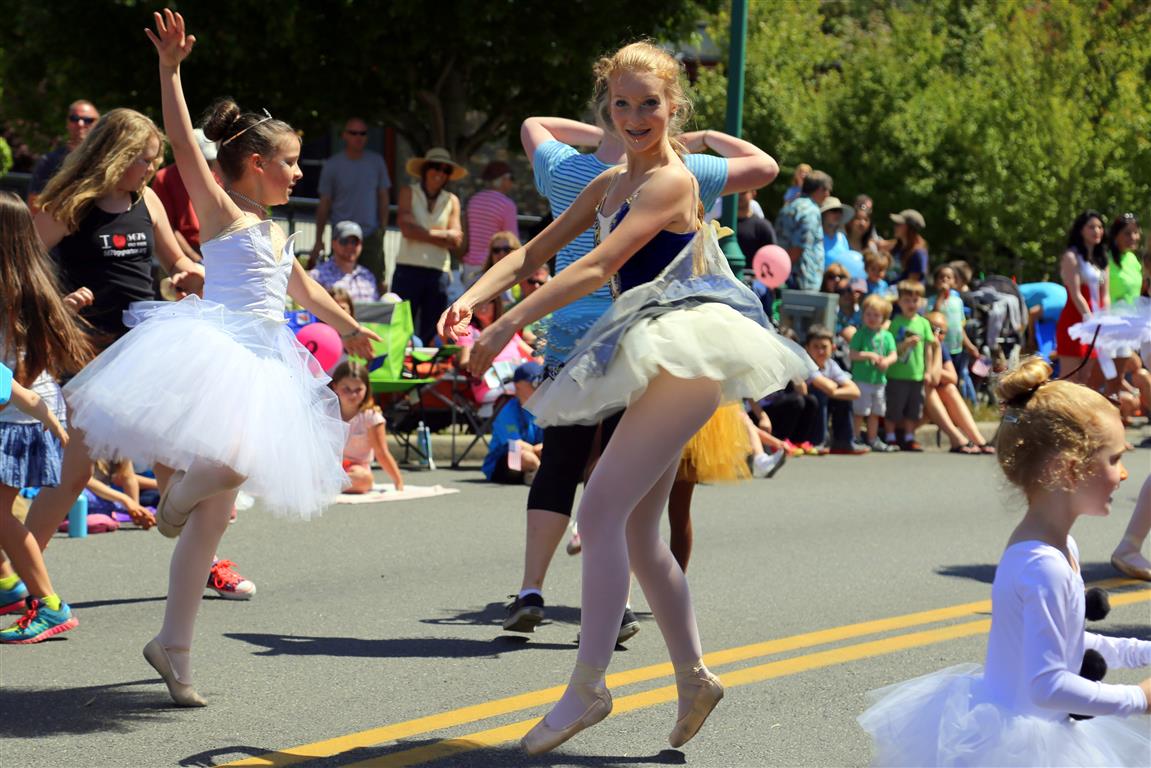 Dancers from a local ballet academy perform in a past Gig Fest parade along Harborview Drive.

Maritime Gig Festival is Family Fun for All Ages

The expanded festival footprint, up Pioneer Way to Tarabochia Street running west of the Harbor General Store, was a huge success last year and will be in place again this year. The extra space makes room for up to 20 more craft and non-profit booths. 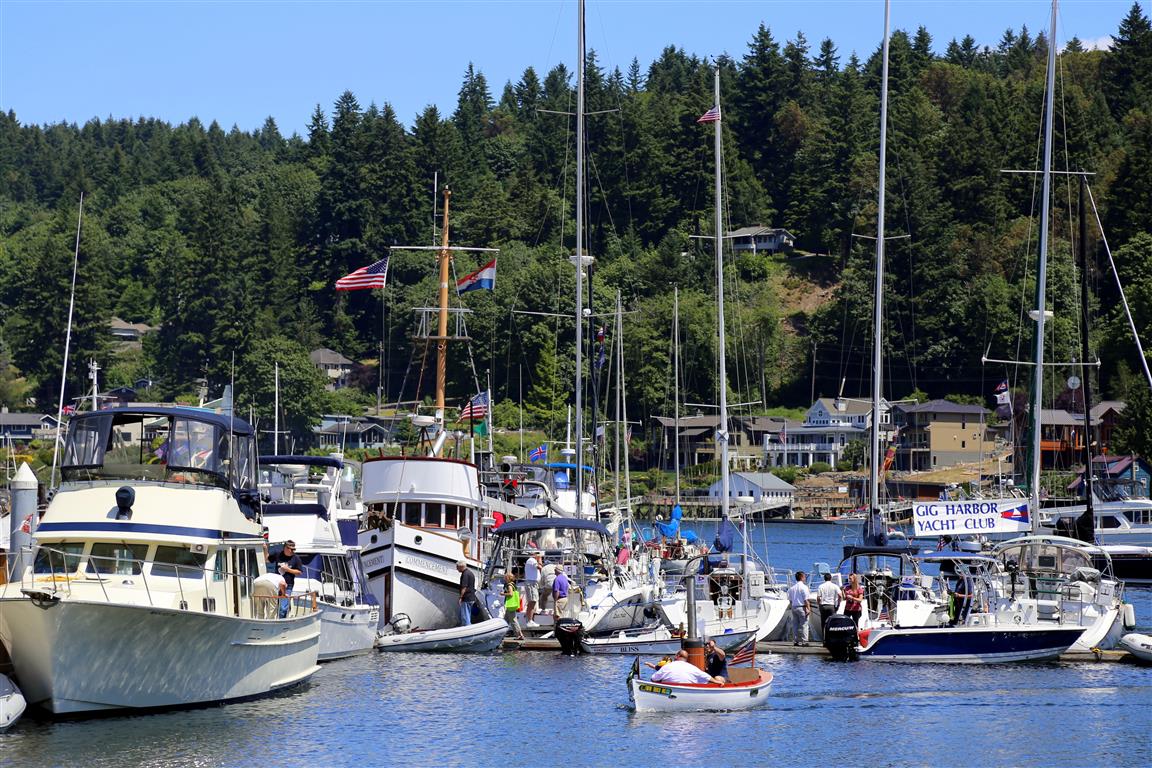 Be sure to check the Gig Fest concert schedule for outstanding entertainment and concerts taking place on the stage in Skansie Brothers Park. The line-up includes local school choirs, jazz and rock bands; The Fab Three Beatles tribute band; Five $ Fine, a country/classic rock band from Gig Harbor, and the crowd-pleasing Shy Boys. On Sunday, June 5, come to the waterfront again for the Wheels on the Water classic car show at 11 a.m. Then be sure to take in a special, long-standing Gig Harbor tradition, the Blessing of the Fleet, taking place at 1:00 p.m. 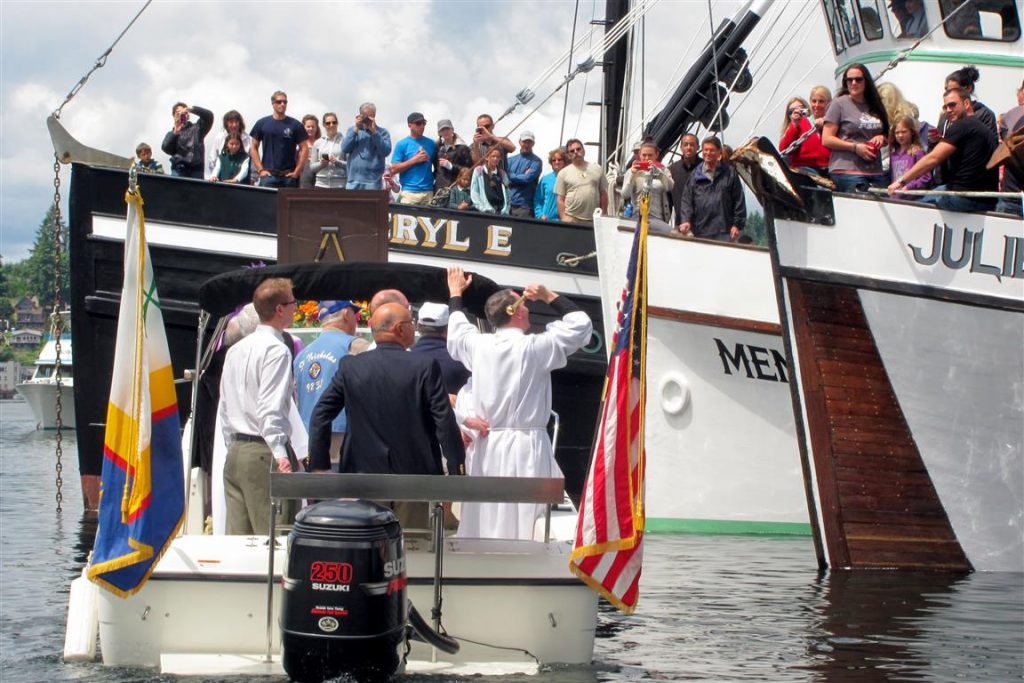 Clergy from St. Nicholas Catholic Church in Gig Harbor will perform the traditional blessing of the fishing fleet on Sunday.

So, mateys, get ready for a whale of a good time this weekend in the harbor. For more information visit www.maritimegig.com or call the Chamber office at 253-851-6865. Aaarrgghh!