Relationships with Customers is the Best Reward

Jeffrey Broders hit the ground running last week and it’s a course he knows well. The new boatyard manager here at Gig Harbor Marina & Boatyard started his new job on Monday, Sept. 23, and by Thursday it was as though he’d been on duty for months.

For him, it’s all about developing relationships with customers and Jeff was well under way with that when I sat down with him on his fourth day. Or tried to. The boatyard office is a busy place and customers and crew were making a steady flow in and out of the office that afternoon with questions and to-do lists for their boats.

I loved watching the action with “the new guy” in his element forging new relationships.

“To me, developing these relationships with customers is the reward,” said Broders, who comes to us after 17 years of experience as operations manager of Gambol Industries, Inc., a full-service boatyard in Long Beach, Calif.

“I appreciate that I got to make relationships over the years (at Gambol),” he said. “Those relationships and having them as happy, return customers is a reward you can’t put in a paycheck. To me, that’s the reward.” 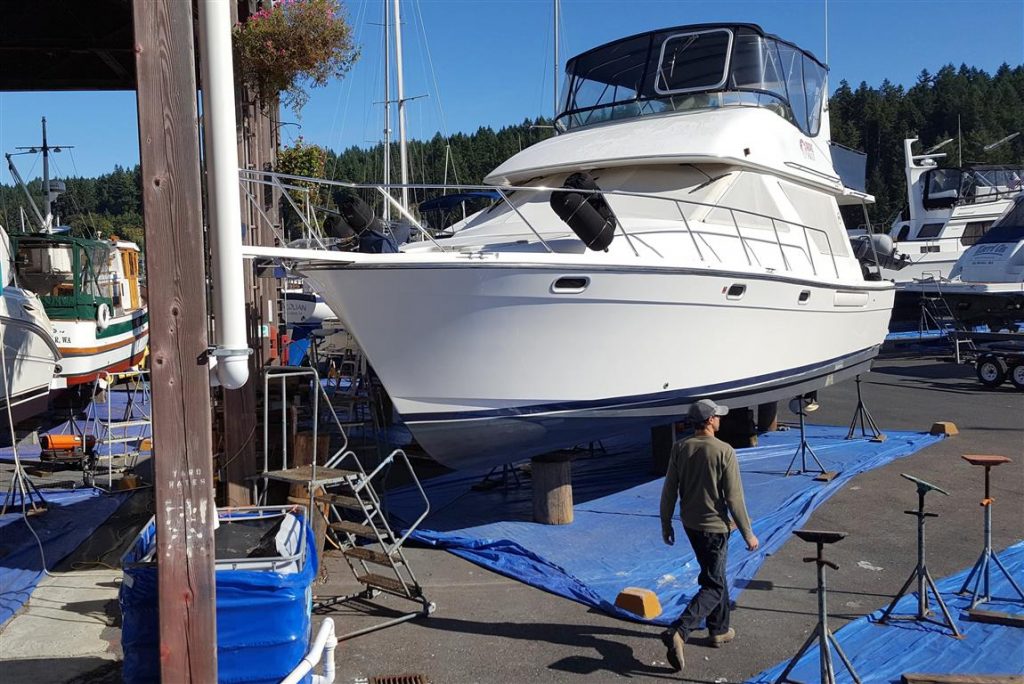 Shipwright Jason Lee heads to a boat on the hard at Gig Harbor Marina & Boatyard. New Yard Manager Jeff Broders is looking forward to working closely with customers and crew.

His easy way with people is what gets things going. At Gambol, Broders managed all aspects of the full-service boatyard from initial customer contact to estimating, project management, quality assurance and constant customer contact on project status.

Jeff, a 20-year veteran with the U.S. Marine Corps, was instrumental in developing Gambol’s expansion into becoming a tier-one boatyard service and repair facility. Founded in 1992, Gambol began as a yacht manufacturer and then local boat owners began requesting repair and custom work on their vessels, according to the company website.

The fine work done on these jobs gained Gambol the reputation of a company with an experienced crew capable of producing quality work, so the company expanded its facilities and opened its doors as a full-service boatyard. Broders was brought on board to develop the start-up boatyard, bringing his skills in leadership and management. The result was a substantially increased customer base and improved profitability and safety practices.

“This is a nice change of pace and I’m still doing what I’m good at and love doing.” – New Yard Manager Jeff Broders

And now, ready for a change of pace from crowded Southern California, Broders is here in Gig Harbor, doing more of what he loves at Gig Harbor Marina & Boatyard. His wife of 30 years, Estee, is still back home in Orange County for a while longer, overseeing contractors working on a remodeling project the couple had under way. Jeff and his wife have two grown daughters in Southern California, one a physical therapist training to become a registered nurse, and the other a police officer.

The day he headed north to his new job 1,100 miles away in Gig Harbor happened to be the couple’s 30th wedding anniversary, Jeff said, noting wryly that experts put moving and starting a new job pretty high up on the list of stressors in life.

“This is a total change with moving and starting a new job,” he said, “but I’m just an easy-going guy.” 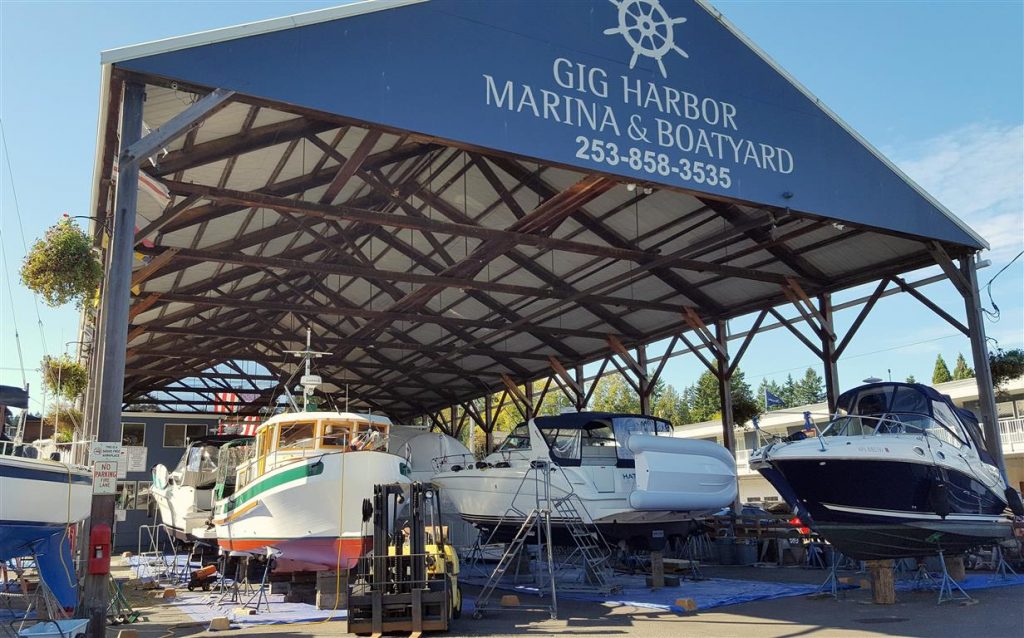 Broders brings many years of management and boatyard experience to Gig Harbor Marina & Boatyard, where he gets to keep doing what he loves doing.

Jeff, who is right at home on boats, is staying on the boatyard’s guest yacht Suite Dreams while he finds a place to live. In fact, he also started out at Gambol living on his boat in the marina there, he said.

Broders, a certified sailing instructor through the American Sailing Association, says his love of boating goes back to his childhood in Utah. Through Boy Scouts he learned to sail on the Great Salt Lake on Sunfish, Hobie and Laser sailboats. His sailing experience continued during his career in the Marines where his various duty stations were always near marinas with available sailboats.

Broders’ 20-year career in the Marines served him well for his subsequent career with boats and boatyard management. He left the service in 2002 with the rank of Gunnery Sergeant working as an aviation support equipment technician (MOS 6072). He rose through the ranks from recruit up through becoming a staff non-commissioned officer as maintenance chief for the Aircraft Immediate Maintenance Depot (AIMD). He oversaw up to 350 aviation maintenance Marines and six civilian employees in the Avionics, Support Equipment, Ordnance, Supply and Quality Assurance divisions.

When Broders left the military he asked himself some straight-forward questions that put him where he is today:

“What am I good at and what do I love doing?” he asked himself. “I had that background in mechanics and I thought: I love boats.”

So that took him to Gambol, where he gained a lot of wooden boat experience, Jeff says, and now the path has brought him to Gig Harbor. He’d heard of this beautiful South Sound harbor town from a young local Marine who worked for him years ago, and when he did a Google search he saw that the area would be a good fit for his love of hunting and skiing. 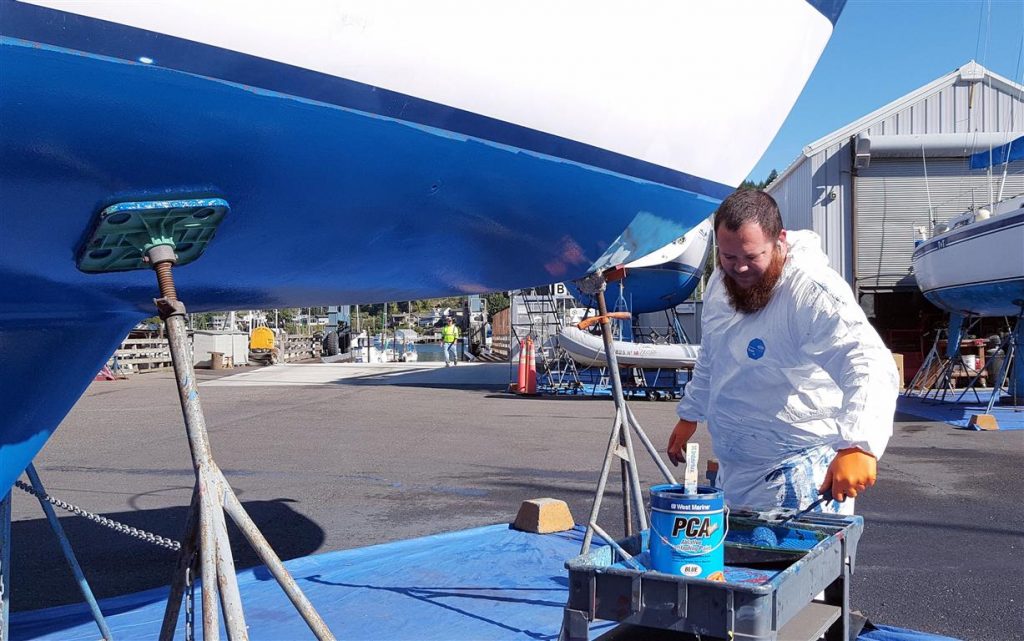 Broders is getting to know his new boatyard crew, including Matt Betancourt of the paint crew, and yard supervisor/Travelift operator Mark Rybin (in the distance).

Now he’s on the job, busy sorting out the various Mikes and Marks at the boatyard, and also seeing some “old familiar faces.” Coincidentally and in the ‘it’s a small world’ category, one of the boats currently on the hard, Lion’s Den, was also serviced at his Long Beach boatyard. Plus, there was one more deja vu moment when the new yard manager was getting acquainted with the boatyard on his first day.

Broders said when he stepped onto Eagle, one of our Fleet Suites @ the Boatyard guest yachts, he just knew he’d been on board before. As it turns out, he put in the yacht’s teak decking in Long Beach when musician Steve Miller’s former boat’s name was Abracadabra.

But that’s just how it seems to go in the boating world, Jeff says.

“There are only so many boats and only so many boatyards to support them,” he said between serving customers on Day 4 at Gig Harbor Marina & Boatyard. “I’m looking forward to this new opportunity here. This is a nice change of pace and I’m still doing what I’m good at and love doing.”