Bella, the irrepressible miniature poodle mix, is busy again making the rounds at Gig Harbor Marina & Boatyard now that her best friend is back at work.

Mike Sandfry, the all-around handyman at the downtown Gig Harbor boatyard, was out of state last week and Bella had to settle for what most tiny dogs resembling a pillow pup would relish: staying in the warm office for cushy days of pampering by the office staff. 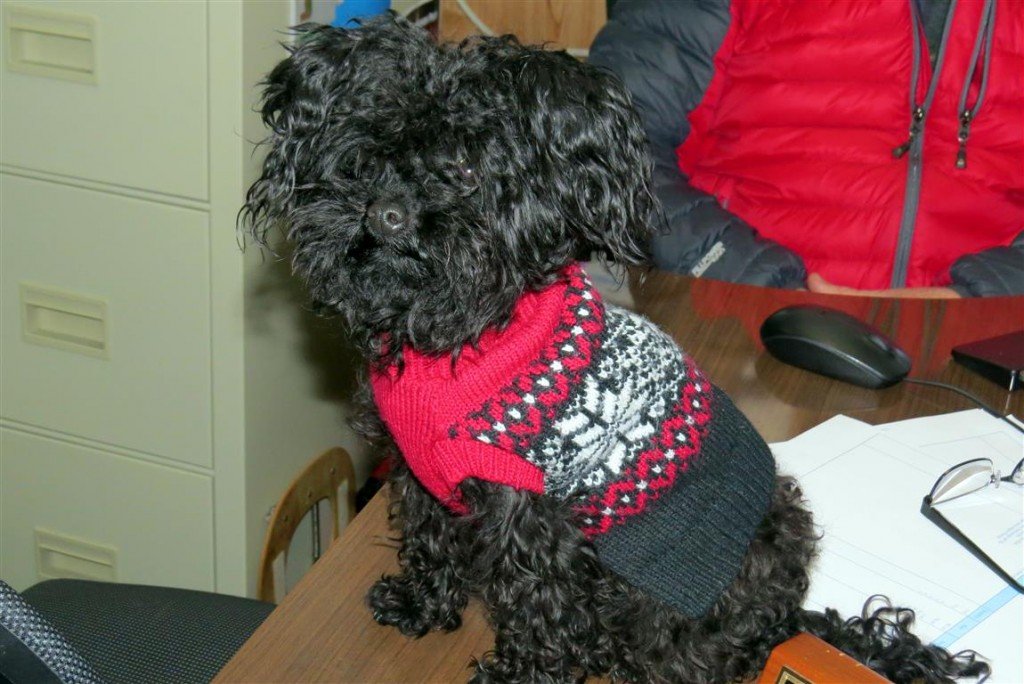 But what Bella, a toy poodle/Maltese mix, really loves is following her favorite human around the boatyard all day, no matter how cold and rainy the weather.

“She follows me everywhere,” said Sandfry, looking behind him to check on the small curly-haired shadow at his heels. “She just wants to be where I am and she doesn’t care if it’s cold and she never gets tired.”

Sandfry, who has worked at Gig Harbor Marina & Boatyard for about 11 months, goes all over the property in the course of a day, taking care of odd jobs and handyman tasks of all types.  Bella, who weighs all of four pounds, follows him closely every step of the way, but even her loyalty has its limits.

“She has a fear of the water and won’t go through the gates (to the docks),” said Sandfry as he patiently scooped up two-year-old Bella, bouncing and hopping at his feet in a successful appeal to be picked up.

Despite her dogged determination, there are some tasks around the marina and boatyard for which this diminutive man’s best friend just has to Sit and Stay.

“I take her to the office if I’m doing something she shouldn’t be around, like when I’m putting bleach on the floors,” said Bella’s human. “I don’t want her to walk in it.”

Sandfry says he does “whatever is needed” around the busy boatyard, from sanding picnic tables for the new food trolley, to giving the red door of the Guesthouse a new coat of paint, finding a plugged drain pipe that was causing rain water to pool behind a storage building, and keeping the boatyard free of weeds and grass.

“It’s just whatever I see,” said the handyman, who previously worked at Minterbrook Oyster Company, and still does on occasion. “In fact, I see a mess right over there,” he said, pointing across the yard to clumps of seaweed and barnacles that had just been pressure-washed off a boat in the Travelift.

Off he went when his little black shadow right behind him.