If you haven’t heard by now, Gig Harbor is going to the Olympics — with history being made along the way.

“She did it!!! GHCKRT’s (Gig Harbor Canoe & Kayak Racing Team) Nevin Harrison (age 17) has taken the gold in the women’s C1 200-meter at the World Championships in Hungary, securing a U.S. spot in the 2020 Tokyo Olympics! Congratulations, Nevin and Coach Aaron Huston!!! 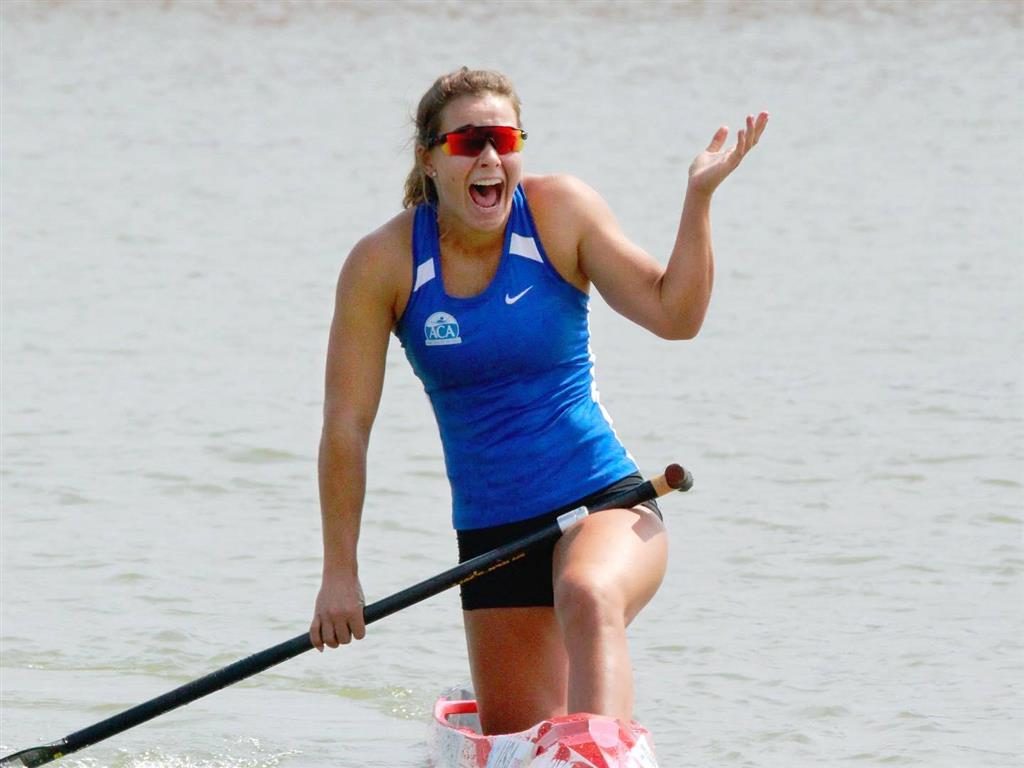 Sprint canoeist Nevin Harrison said she had no words to describe how she felt after winning the World Championship in Hungary on Aug. 24.

Congratulations, too, to the other athletes from the Gig Harbor team who also had great showings at worlds. Outstanding paracanoeist Mike McCallum set two personal records, while brothers Ryan and Jonathan Grady made it to the B finals in the C2 (two-man canoe) 200-meter and semi finals in the C2 1000-meter. 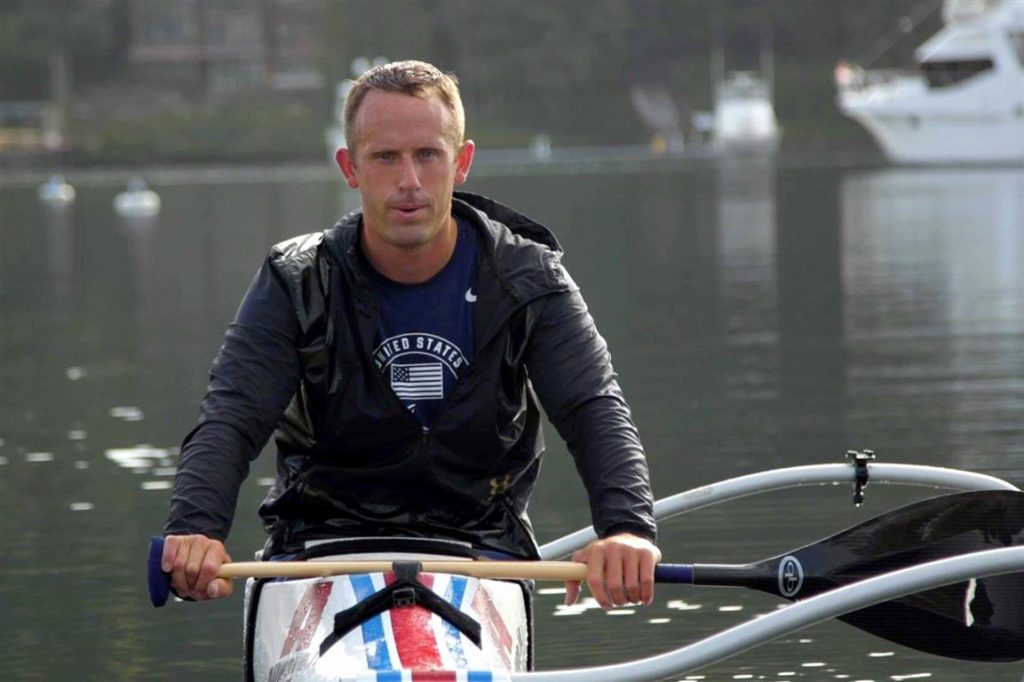 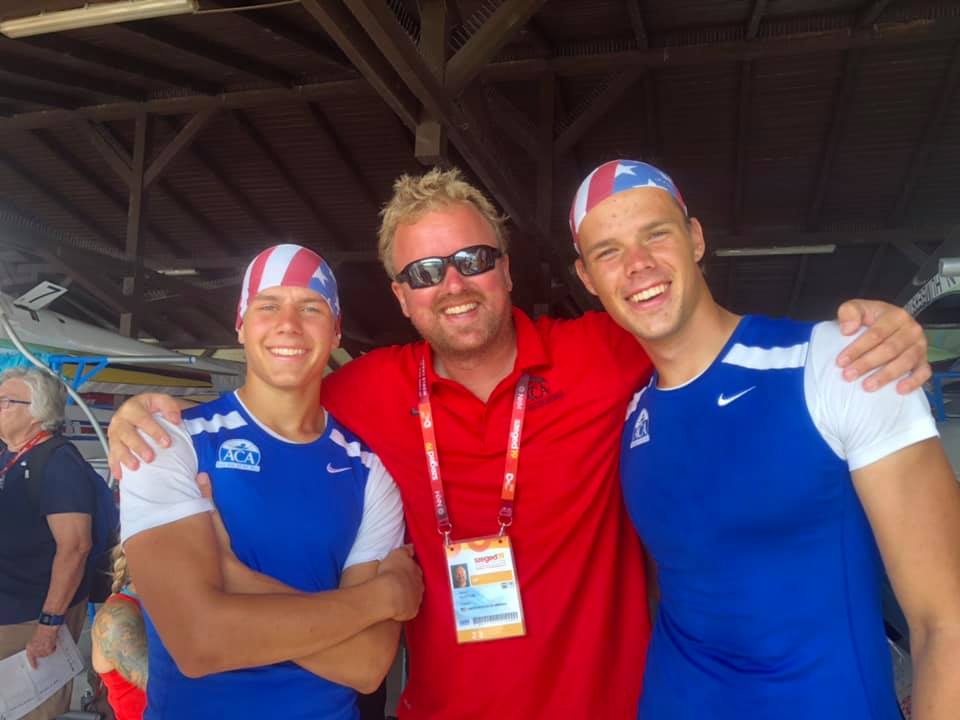 Brothers Ryan and Jonathan Grady pose with Coach Aaron Huston at the World Championships in Hungary.

Nevin Harrison, from Seattle, is a member of the Gig Harbor Canoe & Kayak Racing Team and trains year-round here in Gig Harbor with other athletes making up Team USA from the American Canoe Association (ACA). The paddlers train under head coach Aaron Huston, assisted by Alan Anderson who started the program in 2002, and assistant coaches Alyson Morse and Bryse Paffile, both of whom came up through the program.

Nevin covered the 200-meter sprint course at worlds in 49.30 seconds to win by .44, according to an article by OlympicTalk of NBC Sports. 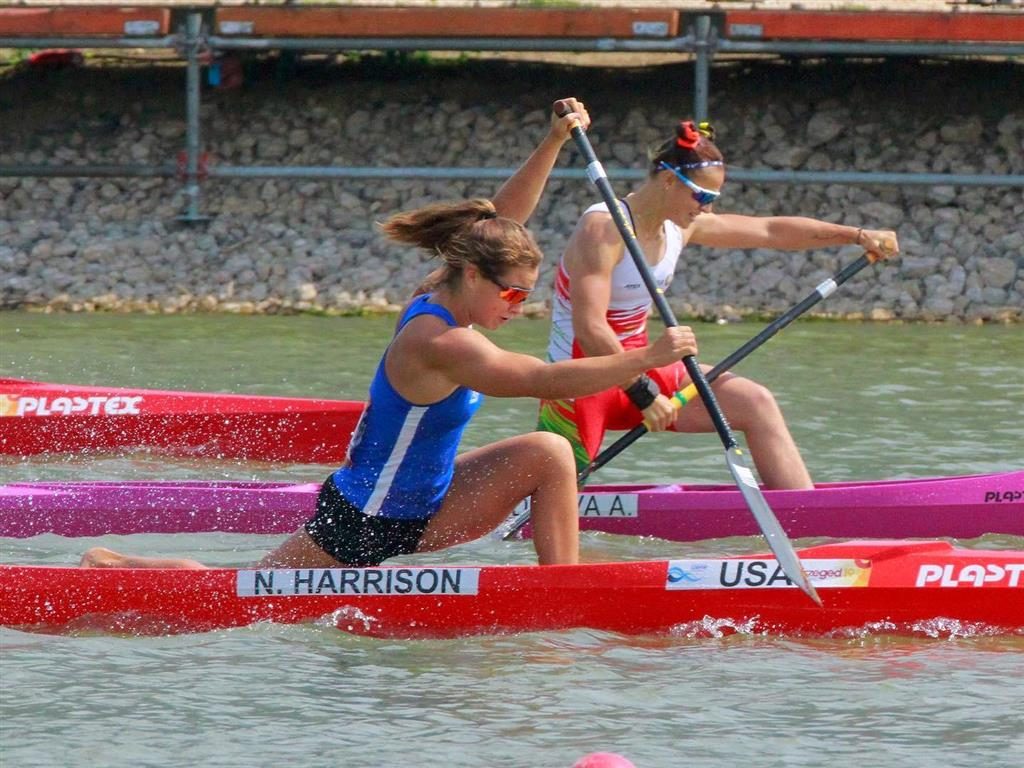 “She crossed the finish line, stopped, looked to the side, held up one finger to question her result, then covered her mouth once she realized it,” said the NBC Sports article posted on the GHCKRT page. 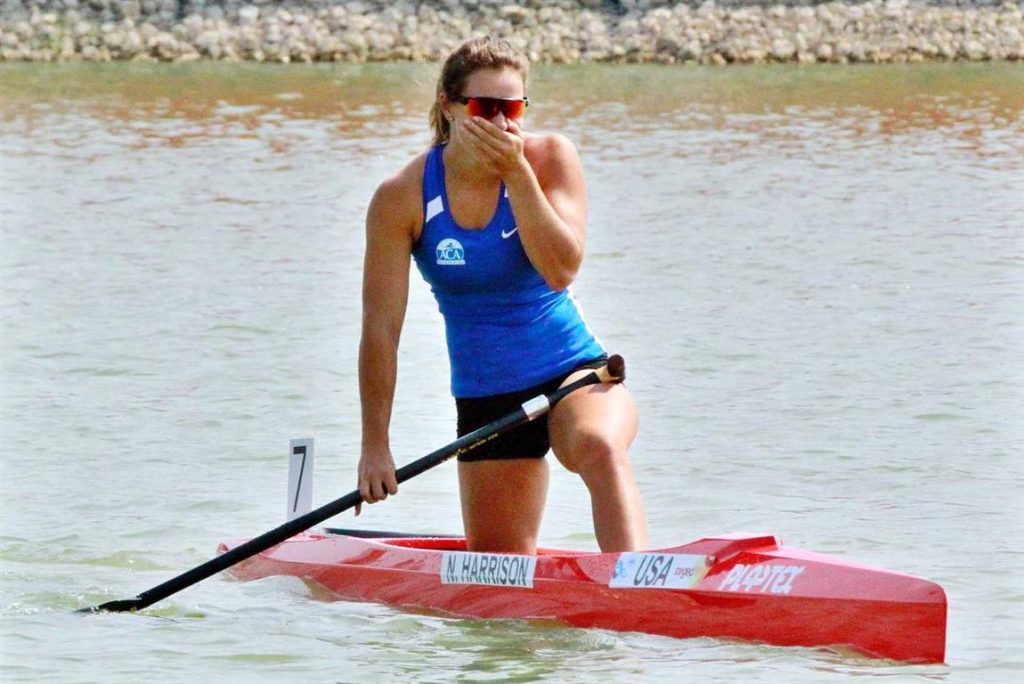 Nevin Harrison, 17, became the first American to earn a World Championship medal in a sprint canoe event, and it happened to be gold, surprising herself in the 200-meter in Szeged, Hungary, on Aug. 24.

“I have no words right now,” Nevin said upon getting out of the water. “It’s unreal, so much more than I ever thought…Wow, what a moment.”

Harrison became a serious canoeist just three years ago, the article continues, after hip dysplasia forced her to stop sprinting on the track. She said merely making Saturday’s final was the “biggest dream ever.”

Harrison joins Greg Barton as the only Americans to win an individual world title in sprint canoe or kayak. No U.S. woman has earned Olympic gold in any kayak event. The last silver came via Rebecca Giddens in the slalom in 2004.

Women’s canoe debuts at the 2020 Tokyo Games. Women’s events were added and some men’s events removed to make it equal with eight events per gender in canoe and kayak.

Be sure to see all the fantastic posts on the GHCKRT Facebook page, including a letter from Coach Anderson’s brother, David. He writes that his brother Alan called him about Nevin’s win early on Aug. 24, the program founder’s voice cracking with exhaustion and emotion after following the races held in the middle of the night, West Coast time.

After all, it had been Coach Anderson’s vision — and prediction — that Gig Harbor would some day have an Olympian come out of the program he started 17 years ago with just two 11-year-old boys. And now the first one has in Nevin Harrison.

“My original mission statement was to support the kids locally, regionally, nationally, internationally and ultimately, at the Olympics,” said Anderson as practice got under way in Skansie Brothers Park a few days after the world championships. 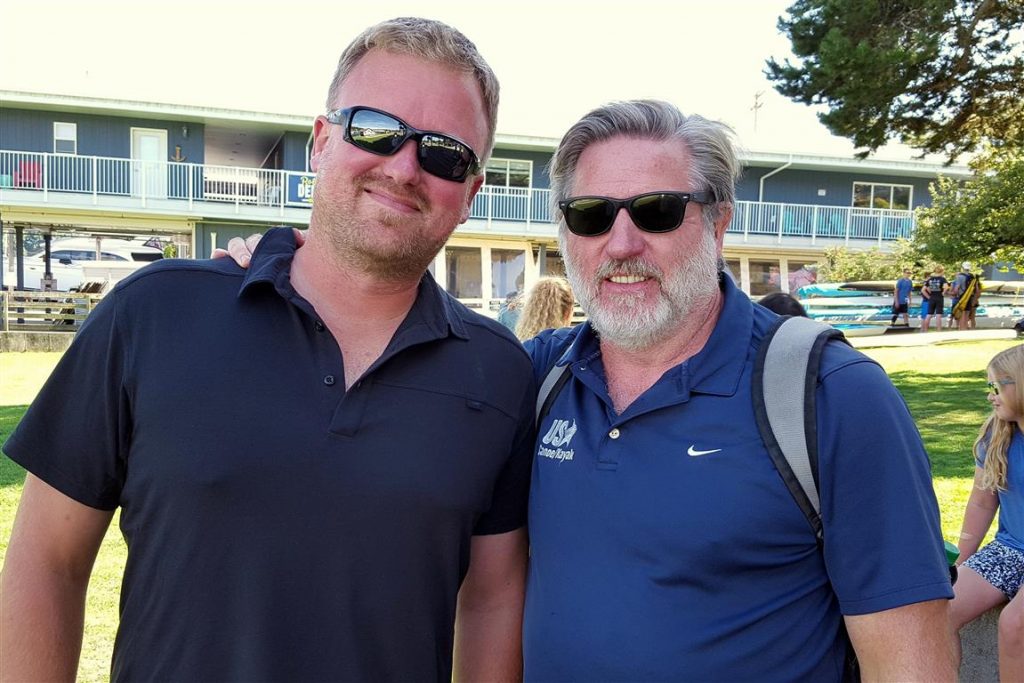 “The other part of my original mission statement was to establish a home for the team in Gig Harbor,” Anderson continued. “My job now is to build support for these kids who are getting their shot at the Olympics.”

It’s a perfect partnership with Coach Aaron, he says, whose focus is getting the kids ready for competition at the next level.

“We are so blessed and I am so pleased to have this partnership with Coach Aaron,” Anderson said. “With him coming in and taking over the head coaching position, his job is to get these kids ready for the next level, international competition, and my focus is on the kids.” 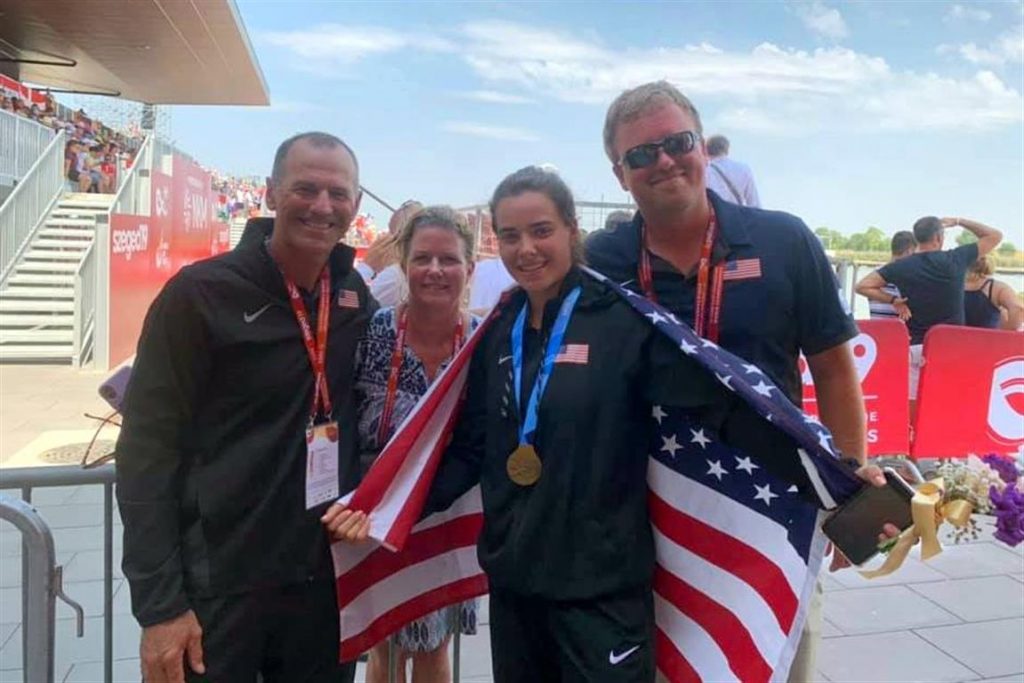 Nevin celebrates her World Championship gold medal win with her coach Aaron Huston, on the right, in Szeged, Hungary. On the left are Chris Barlow, high performance manager and Beth Stillman, executive director of the American Canoe Association.

His brother David says in his Facebook post that Alan had a good feeling about how things were going to go in Hungary the evening before Nevin’s gold medal final.

“Tonight, I’ve a hunch that history will be made,” wrote the coach as he waited for the race. “History for women. History for this nation. History for Gig Harbor.” 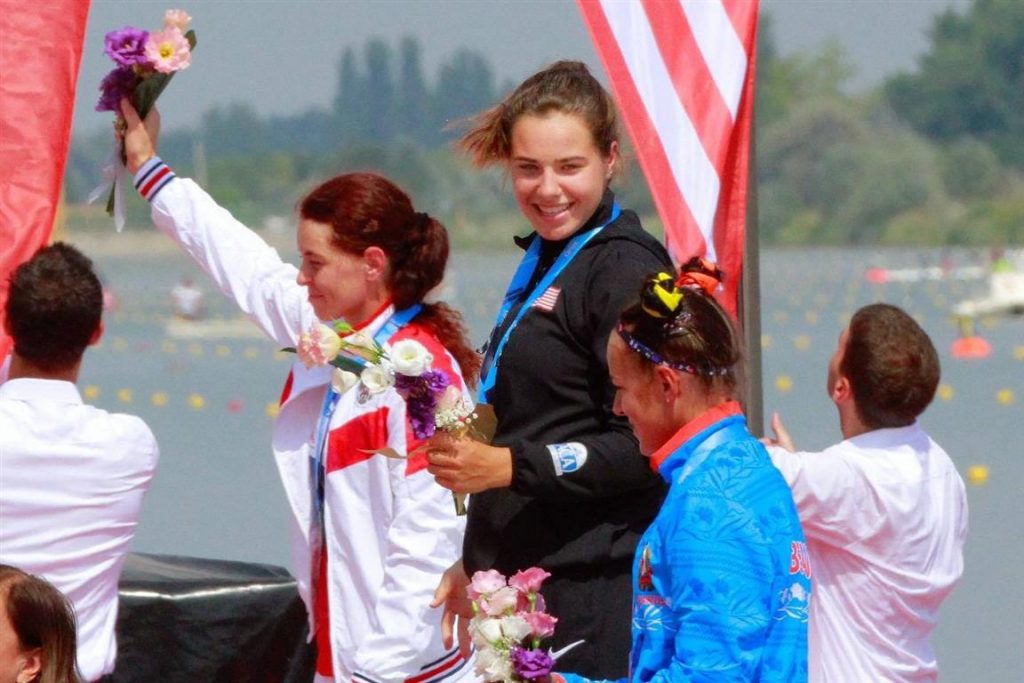 Nevin Harrison, center, stands atop the podium to receive her World Championship gold medal in Szeged, Hungary. Next up: The 2020 Olympic Games in Tokyo.

And his hunch was right.

“Nevin is a phenomenal young lady,” Anderson said. “She made history.”