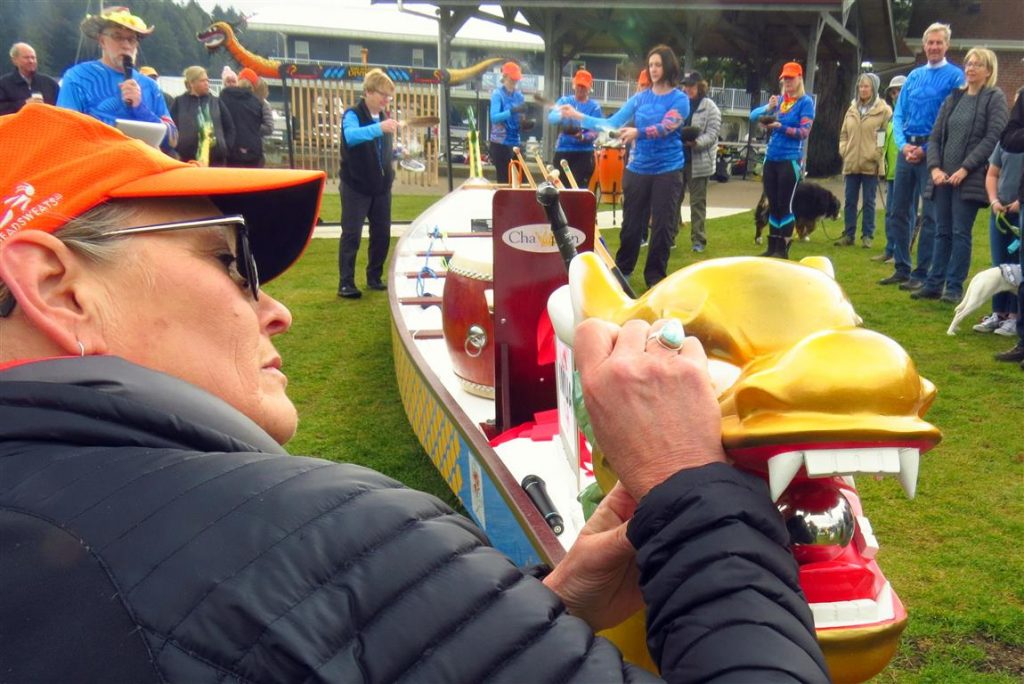 In a ceremony marked by meditative breathing, burning sage and ritual eye-painting, two new dragon boats were fired to life in Gig Harbor on Saturday.

The Gig Harbor Dragons: PenMet Parks Dragon Boat Team held an “Awakening” ceremony on the Gig Harbor waterfront on March 17 to christen Tiamat and Imua. The two new 10-person boats from China join the original dragon boat purchased by Gig Harbor Marina & Boatyard three years ago — and which has since breathed fire into this hugely popular team paddling sport. 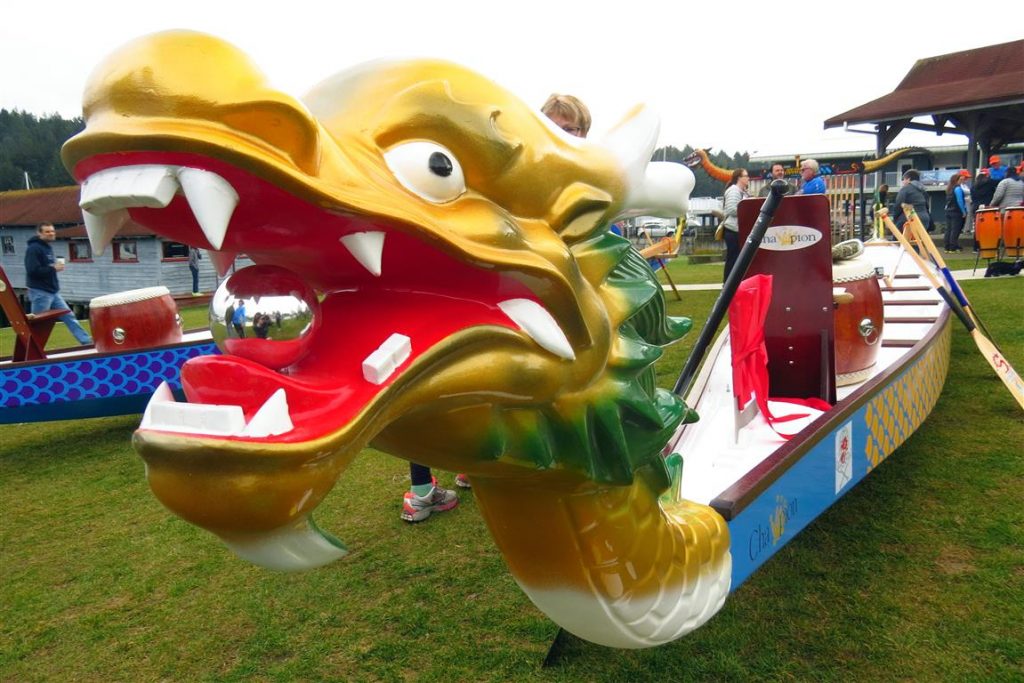 Two new Champion-brand fiberglass dragon boats have been added to the fleet moored for community use at Gig Harbor Marina & Boatyard. This photo is before Imua’s name was revealed and her eyes painted red as part of the Awakening ceremony on March 17.

The fledgling group started their first year with 35 paddlers, grew to 75 members last year and now out of that number has 42 members who paddle year-round.

On Saturday the club enacted its version of an ancient Chinese ritual heralding the beginning of the dragon boat festival season. The “Awakening of the Dragon” rite included meditative or stimulating breathing, waving smoky sage around the new boats and painting the eyes of the dragons. 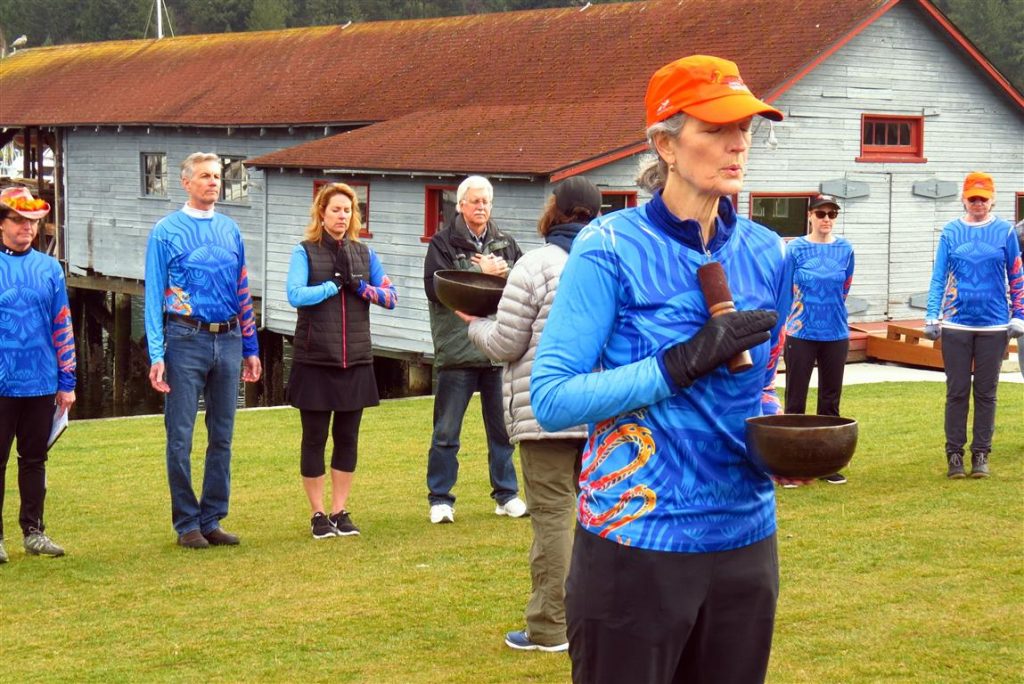 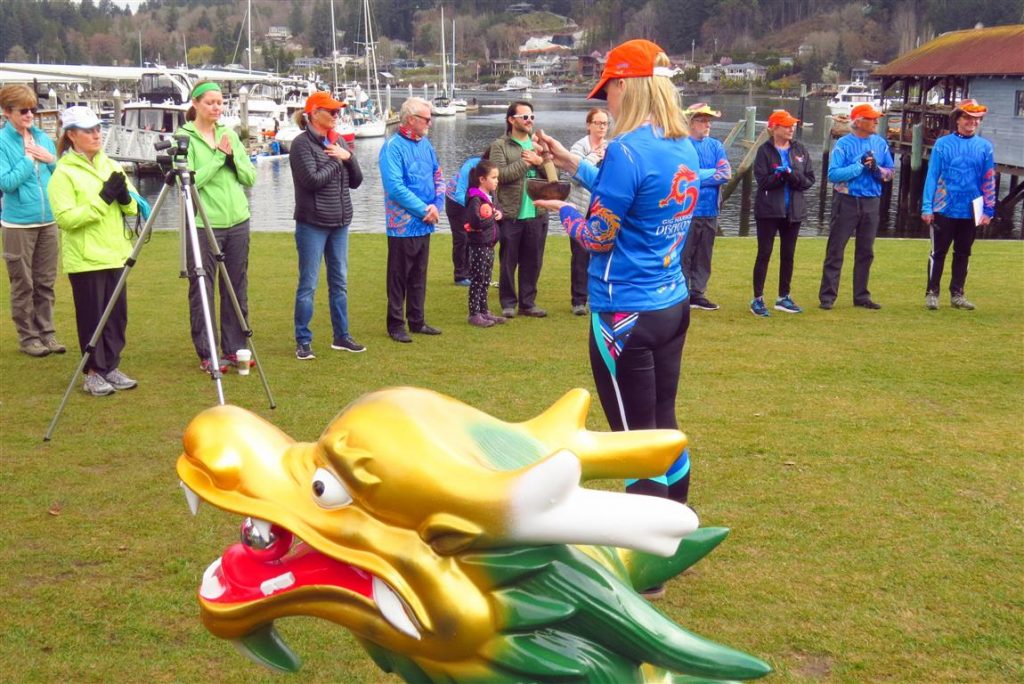 A brief history was also given of this increasingly popular sport, which dates back 2,000 years to about the time the Olympic Games were getting started in ancient Greece. Team dragon boat paddling is now the fastest-growing boating activity in the country, a team member told the gathering.

The Gig Harbor dragon boat team also expressed its gratitude to Roark for his continued support of dragon boating in the harbor. He and the Peninsula Athletic Association each paid half of the cost of Imua, while a paddling team member bought Tiamat. 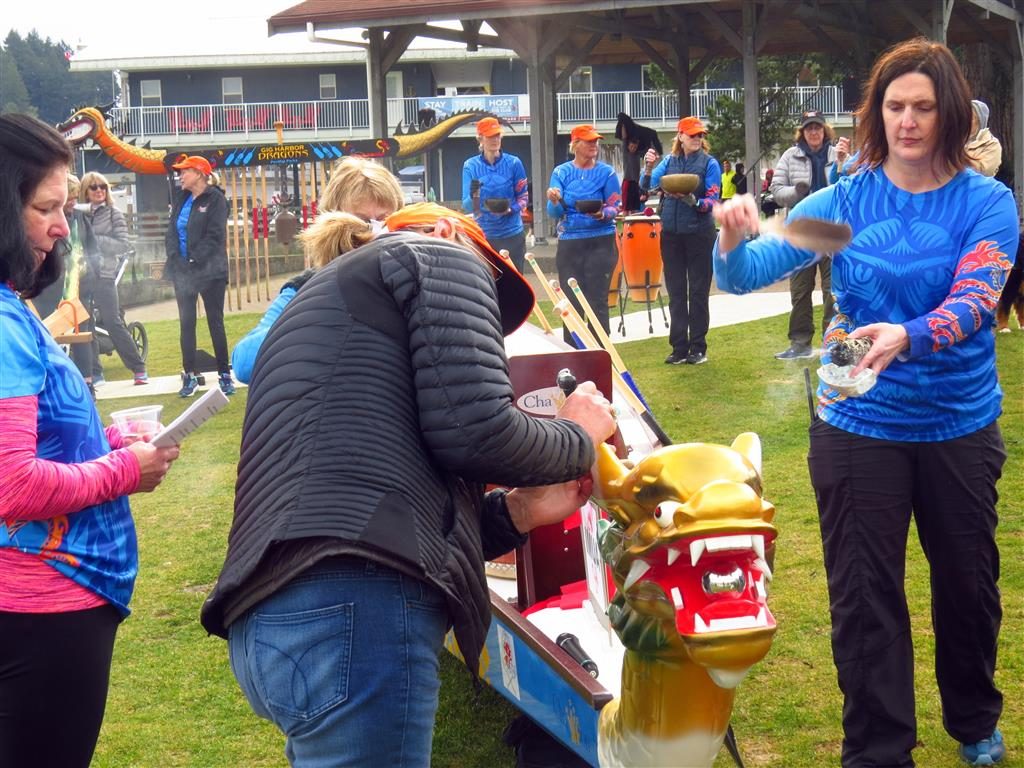 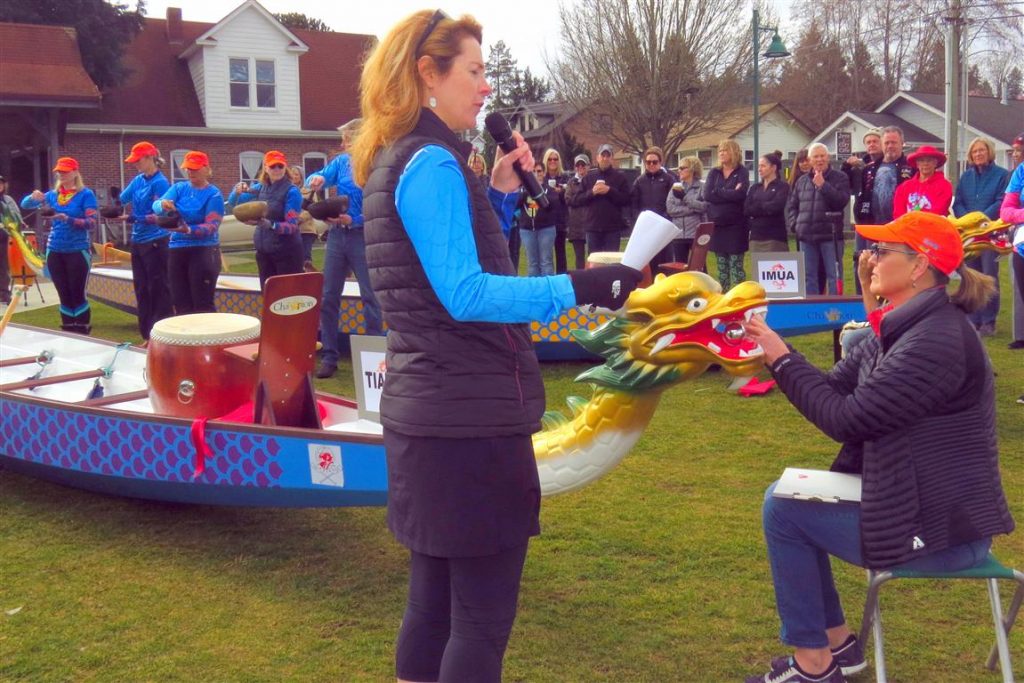 The Awakening ceremony culminated with the dotting of the dragon’s eyes with red paint, thus awakening the dragon and ending its time in slumber. A bit of red paint was also dabbed on the dragon’s tongue with graphic artist Margaux Serock of Margaux Marine Graphics (in orange cap) doing the painting honors. 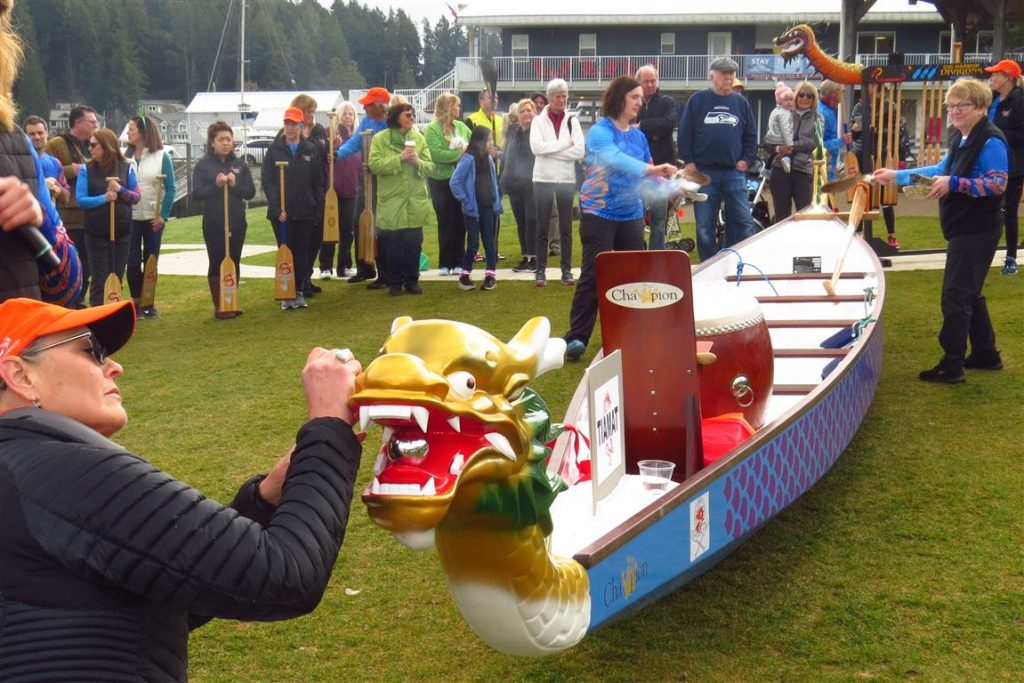 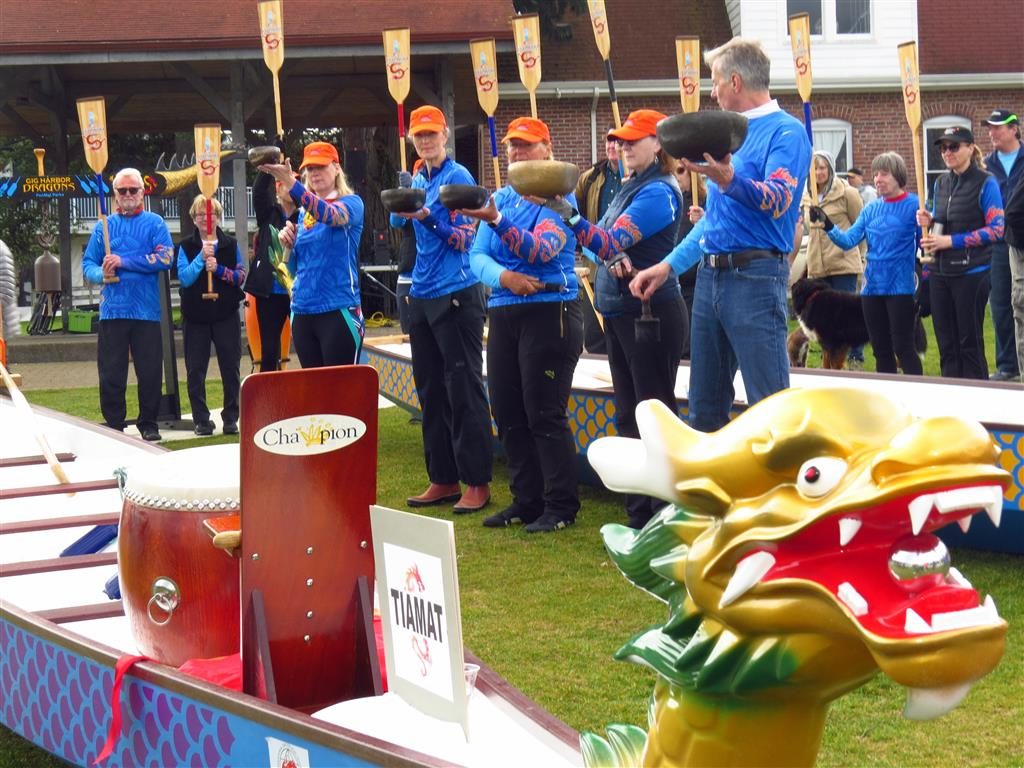 Tiamat and Imua are Awakened for Upcoming Dragon Boat Season 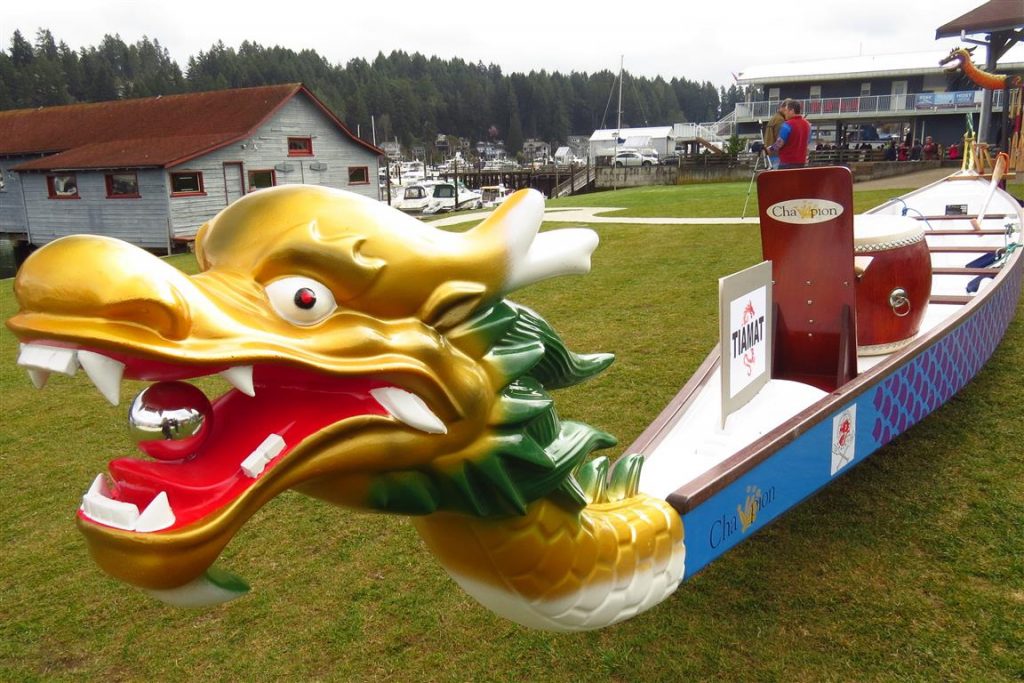 New dragon boat Tiamat was “awakened” in a ritual that included painting a red pupil in the eyes. The shiny ball in the mouth denotes a pearl of wisdom. The glowing pearl is said to be the dragon’s source of supernatural powers and, not surprisingly, dragons protect it fiercely.

Follow the Gig Harbor Dragons: PenMet Parks Dragon Boat Team on Facebook. They will open their season in a supporting role at the Gig Harbor Paddlers Cup April 21-22, then the Dragons will compete the following weekend at the Saint Martin Regatta in Olympia.