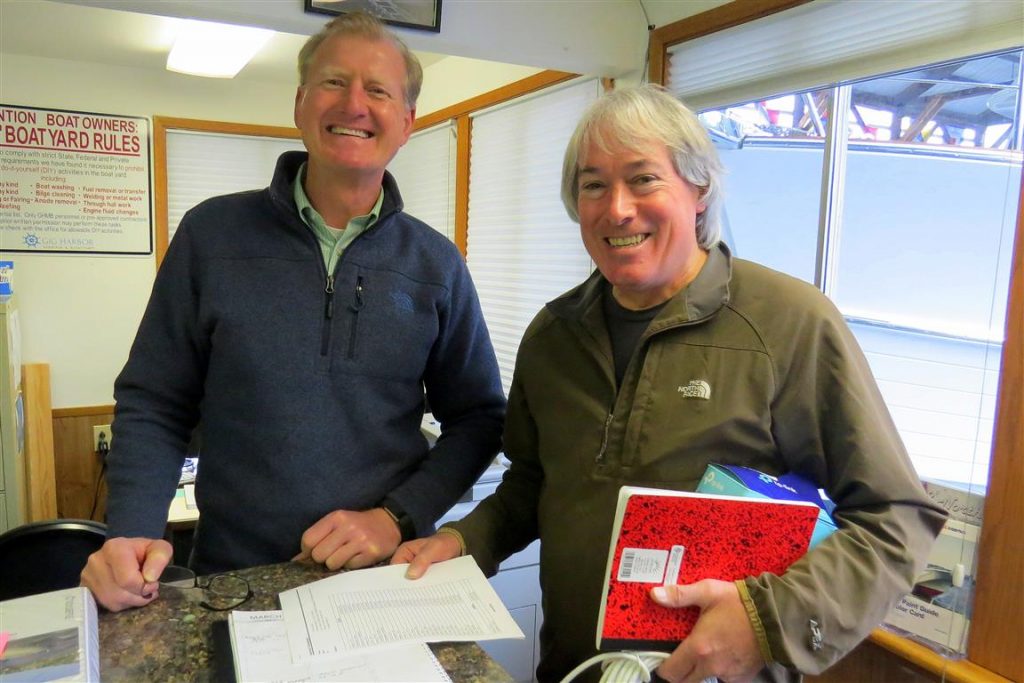 We’ll get to know Champagne and Ford, seen above, in Parts 2 and 3 of my installments on New Managers @ the Boatyard. But first, let’s meet Cartwright in Part 1: 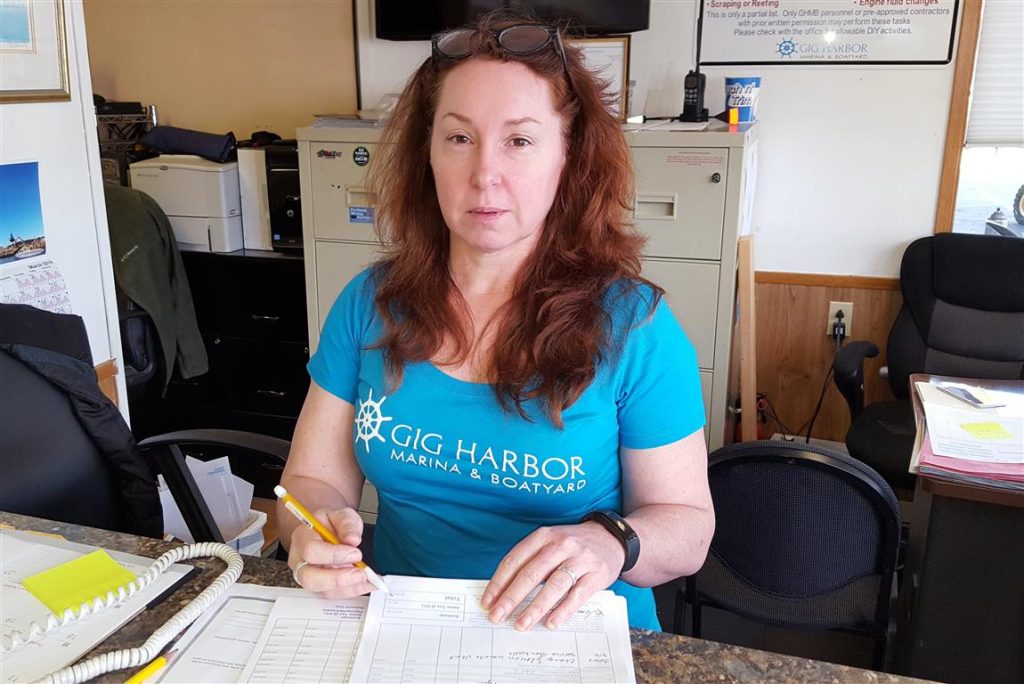 Rachael Cartwright, a former rep for Pettit Paint, came on board at Gig Harbor Marina & Boatyard at the end of February. She steps into big shoes previously filled by Chris Hawke, who, with his vast technical skills and experience, has moved to the role of Senior Technician at the boatyard.

“Chris is brilliant,” said Rachael when we sat down recently to talk about her new position. “He answers a lot of my questions about mechanical and electrical know-how because he knows that side of things so well.”

Cartwright, who is an avid sailor and currently lives in Tacoma, has plenty of know-how of her own, too. She brings with her 17 years of experience as service manager and boat technician at Ferry Point Marina outside of Annapolis, Md. There, her expertise was in bottom painting, fiberglass repairs, varnishing, hull-painting and non-skid applications, as well as performing other various boat repairs.

Working with yard crew and customers is what Rachael enjoys most about her job.

“As an avid boater myself I love helping people find a way to get on the water.” – Rachael Cartwright 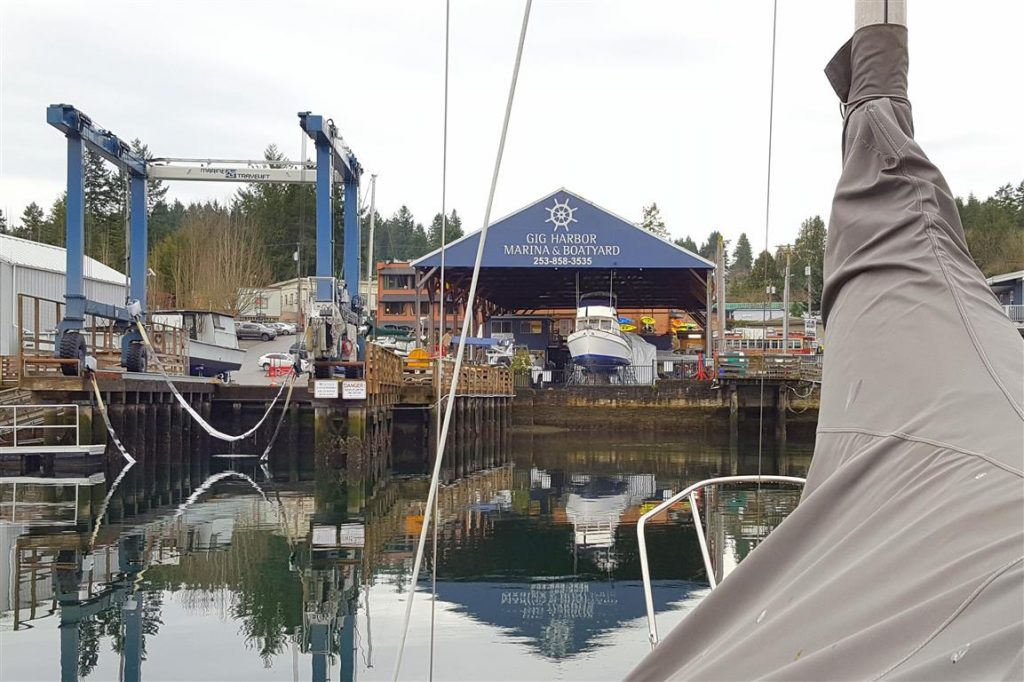 Gig Harbor Marina & Boatyard is the only full-service marine repair facility in Gig Harbor. Come see how we can get you back on the water.

“I love dealing with customers and finding a fix for their problems,” said the manager, who holds a bachelor’s degree in behavioral science, which has to come in handy on the job from time to time. “I also love motivating the crew and finding what interests them. I’m a firm believer in training up:  if they have an interest in something I like to try to find a way to cultivate that.”

When her daughter, now 23 and an auto mechanic — whose first word was car, “so I knew how it would go,” she says — was grown and gone, Rachael, a West Coast native, came back out West with Pettit Paint.

She is starting to see more women join the ranks in what is traditionally a male-dominated marine service industry.

“I think we underestimate our abilities as women,” said Cartwright. “It IS hard work, but I’m seeing more women in the industry and I like to foster that. Even my daughter followed those steps as an auto mechanic.” 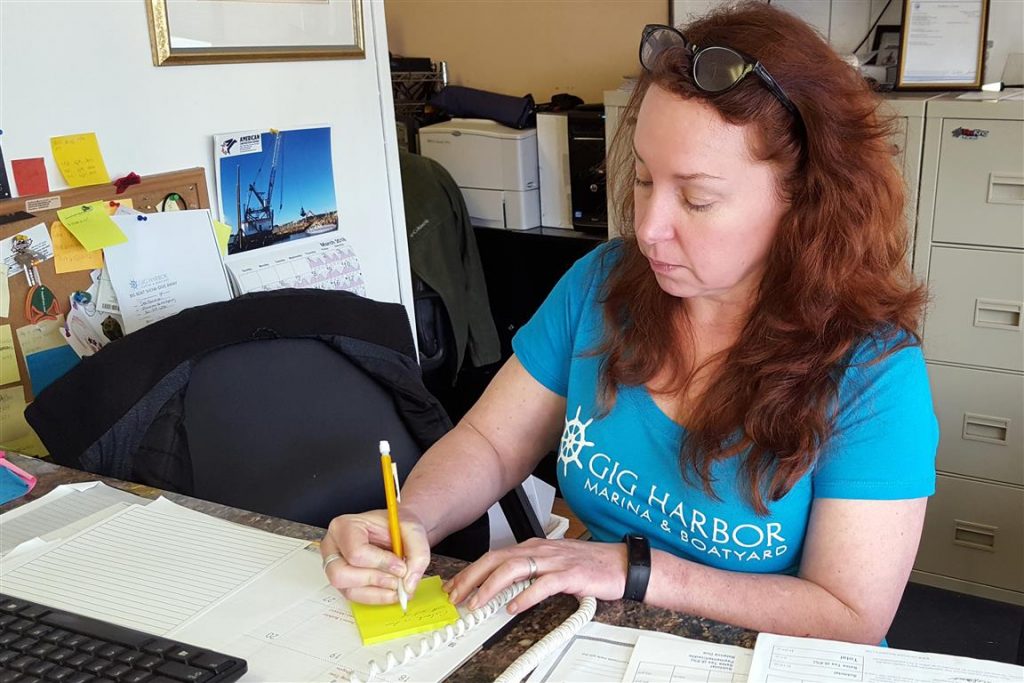 Give Service Manager Rachael Cartwright a call for all of your boat service questions.

As service manager Cartwright will give estimates for customers, manage and monitor service and repair projects, handle schedules and client queries, and perhaps lend her experienced hand to some projects in the yard.

She brings years of experience in working with people and boats to her new role. It all started when she learned to sail 18 and “just fell in love with it,” Rachael says. She currently owns a canoe and is looking to purchase a sailboat.

“As an avid boater myself I love helping people find a way to get on the water,” she said.

And from what better place than right here at Gig Harbor Marina & Boatyard.