Boaters in the harbor, you have probably heard the disappointing news that the state ended its grant with Terry & Sons for marine holding tank pump outs. But now hear the good news: this vital environmental service is now being offered by a new mobile pump out operator.

Gig Harbor resident Paul Weyn, with a passion for keeping our water clean, decided to take action when he heard long-time “pumpout guy” Terry Durfee’s grant would end in March.

He has started NW Mobile Pump Out and Marine Environmental Services, operating boats out of Gig Harbor and Poulsbo. While he needs to charge boaters for his pump out services for now, he hopes his operation can fill the need until another grant is issued for free service. 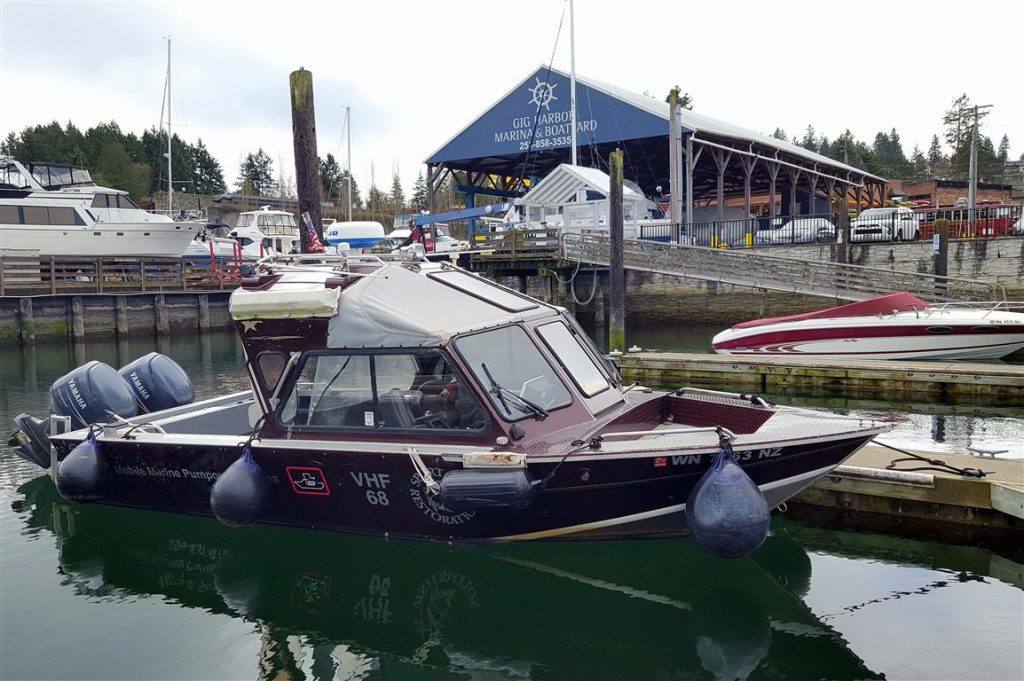 NW Mobile Pump Out and Marine Environmental Services is now operating out of Gig Harbor Marina & Boatyard. Paul Weyn, in photo at top, is doing boat-side pump outs on weekends for now; beginning April 17 he will begin operating seven days a week, dawn ’til dusk.

“My goal is to bring the grant back and I’m in communication with the state and other groups about it,” said Weyn. “But we need to fill the gap from the end of February to when we get the grant back.”

Terry Durfee operated Terry & Sons Mobile Marine Pumpout Services until the end of February when his grant through the Washington State Department of Parks and Recreation came to an end. The grant allowed free pump out service to boaters, whom Durfee served in Gig Harbor, Duwamish, Portage Bay, Liberty Bay and on Lake Washington.

Now Weyn has taken up the cause as he serves area boaters, primarily on weekends until April 17. After that he will begin full-time operation serving Gig Harbor and surrounding area, Commencement Bay, Liberty Bay, Port Madison, Poulsbo and Bainbridge Island.

For now, without grant money taking care of operational costs, he has to charge boaters, and he apologizes for that.

“My goal is to bring back the grant. For this gap period, I just need the support.” – Paul Weyn, operator of NW Mobile Pump Out

Weyn is working hard toward that end. Throughout this summer he will be conducting a pilot program with the Pierce County Planning and Public Works Department providing free pump outs in popular destination areas of the South Sound. He will use the collected data to re-apply for the grant. 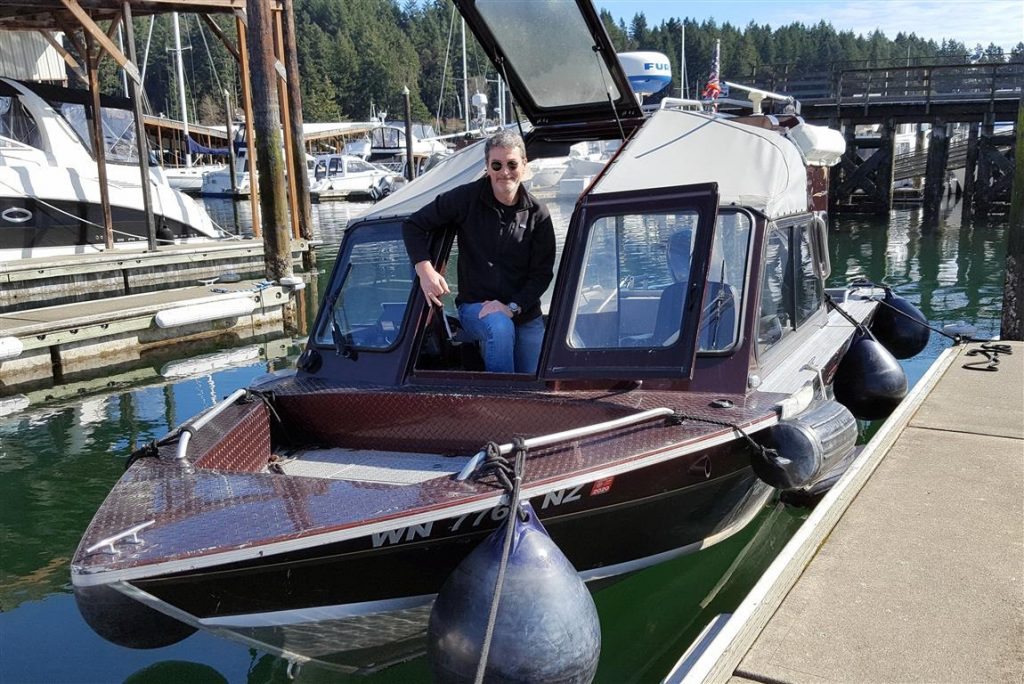 Paul Weyn, operator of NW Mobile Pump Out, asks for boaters’ support while he works to get the state grant back for free pump outs.

“I have always been passionate about the water,” says Weyn, who loves spending time on his 38-foot trawler Solitude, which is moored in Gig Harbor. “My intention is to provide pump out services to areas of the main basin and the South Sound. But to do so I am going to need a much bigger operation and more boats, because in order to keep the water clean we have to go everywhere.”

So passionate is he about keeping the water clean that he quit his regular job in early March to start the pump out service. He left a 20-year career in business development for a mission-critical electronics contract manufacturer serving the aerospace, military and medical device industries.

“I’ve left that well-paying job,” said Weyn. “The purpose of doing this is too important and that’s why I’m doing it. I’m taking a risk and I need the support.”

People wishing to make donations to help with this cause may do so on the NW Mobile Pump Out website.

Weyn is operating NW Mobile Pump Out with the help of his wife Danette, an administrator for the Gig Harbor Fire Department. She is taking care of the bookkeeping end of the pump out business.

So far, people have been very supportive, says Weyn, a native of England, who has lived with Danette in Gig Harbor since 2004 raising their six children.

“Everyone has been so supportive,” he said. “The grant people, marinas, boaters, everybody. They want the grant, just a better structure.” 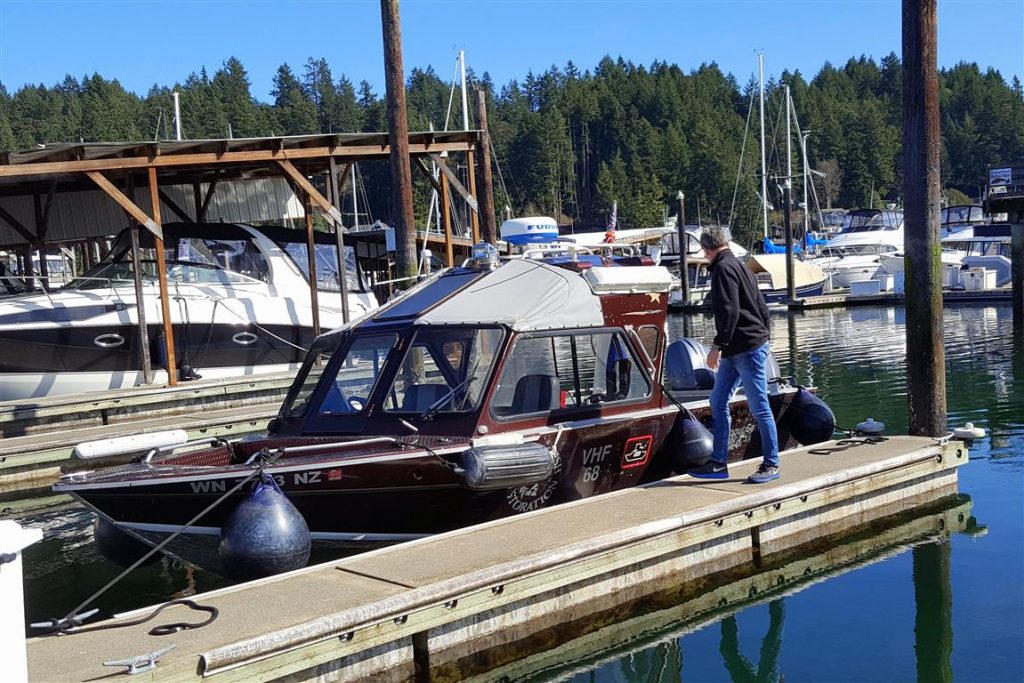 Weyn bought Durfee’s pump out boat that operates from Poulsbo and is leasing the one moored here at Gig Harbor Marina & Boatyard. He praises the work that Terry & Sons did to raise public consciousness on clean water.

“Terry did a fantastic job educating people,” says Weyn. “He really helped change people’s thinking. A lot of boaters used to think that human excrement was no different than whale excrement, but it is. It gets in the shellfish, creates bacteria and odor in a way that marine mammal waste doesn’t. People over the last couple of years have become more ecologically conscious.”

“The purpose of doing this is too important and that’s why I’m doing it.” – Paul Weyn

The state grant program supporting holding tank pump outs developed from the Clean Vessel Act, which the U.S. Congress passed in 1992 to help reduce pollution from vessel sewage discharges. The act established a federal pump out grant program administered by the U.S. Fish & Wildlife Service and the Sport Fish Restoration Act, which authorizes funds for use by states.

The program is administered at the state level by the Washington State Department of Parks and Recreation, which funds 75 percent of operating costs for private pump out companies, with local communities or marinas responsible for the remaining 25 percent.

“My goal is to bring back the grant,” said Weyn. “For this gap period, I just need the support. I want to make a change to do something that helps people. The purpose is keeping the water clean and I think everyone appreciates that.”