What is it about these old tugs? I am always drawn to them when I see them in the yard — and apparently, so are other people, so it isn’t just me.

Jenn Brown, office and marina manager at Gig Harbor Marina & Boatyard, must feel that way because she called to alert me when the venerable Catharine M chugged to the boatyard. Willy Halbert definitely feels that way because he is buying the classic old workhorse.

Catharine M, a 1954 former U.S. Army tugboat, was hauled at Gig Harbor Marina & Boatyard a few weeks ago for a pre-purchase inspection. Her survey included an ultrasound inspection of her steel hull to check for corrosion. All came out well and Halbert, the manager of the Marina at Brown’s Point in Tacoma, will soon finalize his purchase.

The 45-foot tug was stationed in Tacoma for a long time, says Halbert, but for the last several years it has belonged to the Brown’s Point marina. Soon she will start her new life there, beginning with a makeover by Willy, who has plans to fix up the old tug as a live-aboard.

But first, says Willy, the tugboat will be renamed Jethro, as a memorial to the Halberts’ son who passed away from a motorcycle accident. 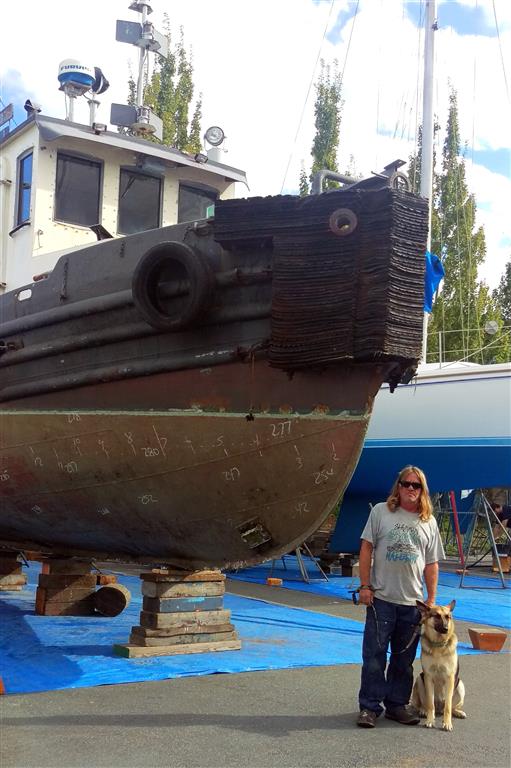 Halbert and his wife, Shannon, currently live aboard their Spencer 42 sailboat at the Marina at Brown’s Point. When the tug’s restoration is finished it will join the active live-aboard community at the marina on the north side of Commencement Bay.

Willy Halbert intends to do about 90 percent of the work on the 62-year-old tug himself.

“The complete housing is coming off and I plan on making it like a Nordic tug,” with all the functionality and aesthetics of those popular boats, he explained. “It will still look like a tug. I’ll keep that look.”

And what a look it is. You can’t help but like it.