Gig Harbor Marina & Boatyard is a “hoppin'” place these days, so a new parts runner has jumped in to help save the crew a few steps. Josh Sommers joined the team last month and he’s been running ever since.

Sommers, a Gig Harbor resident, was hired in March as parts room assistant and parts runner, a vital position to save boatyard mechanics and shipwrights time in rounding up tools and supplies.

“The yard continues to be hoppin,'” said boatyard manager Mark Lindeman earlier this week. “We have seven boats coming in today, four went out on Friday.” Josh fills an important role in making all of that happen a lot more smoothly, he added. “He runs parts to and from suppliers; he’s talking to the guys, going back and forth to the boats. Those guys working on a boat at the far end of the dock have a long trip back and forth to the parts room and shop.”

So Sommers, 25, saves them some of those trips and is enjoying being part of the busy boatyard crew. 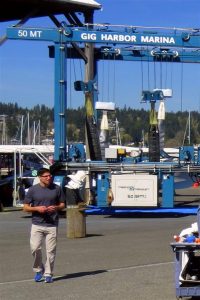 “I’m learning a lot and it’s something different everyday,” he said when I tracked him down on a sailboat at the end of A Dock recently. “I’m on my feet, I’m outside, I like boats and the guys are great.”

Sommers grew up in Spokane until the sixth grade, when his family moved to Gig Harbor. He came to Gig Harbor Marina & Boatyard through a suggestion by his grandparents, who are neighbors of marina owner Ron Roark.

“My grandma suggested I ask if they needed any help here,” he said. “And the rest is history.”