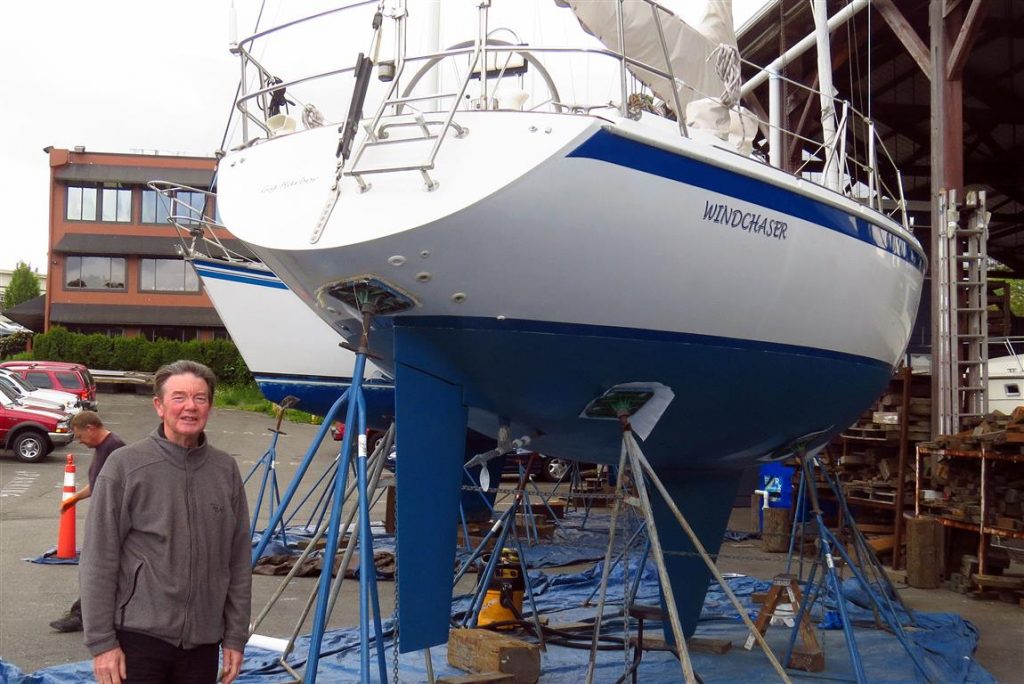 Two local racing sailboats showed up at Gig Harbor Marina & Boatyard at the same time recently. Windchaser and Wildflower, both of Gig Harbor, were up on stands for exactly the same thing: to get a fast, “race boat bottom” paint finish for the upcoming summer racing season.

Their owners, Michael Mordue (in photo above) of Windchaser, and Tom Mitchell of Wildflower are both avid racers in the Gig Harbor Yacht Club. Respectively, they regularly take part in the Thursday night races in the harbor, and the around-Vashon and other out-of-harbor races. The Thursday night “May Series” of races in the harbor just got under way last week and runs through September in Gig Harbor Bay. Several races take place in the Sound throughout the year.

Both boats were on the hard for a “race boat bottom” paint job, said Doug Terrian, leader of the paint shop at Gig Harbor Marina & Boatyard. He and his paint crew worked to make the hulls as smooth as possible before applying bottom paint. 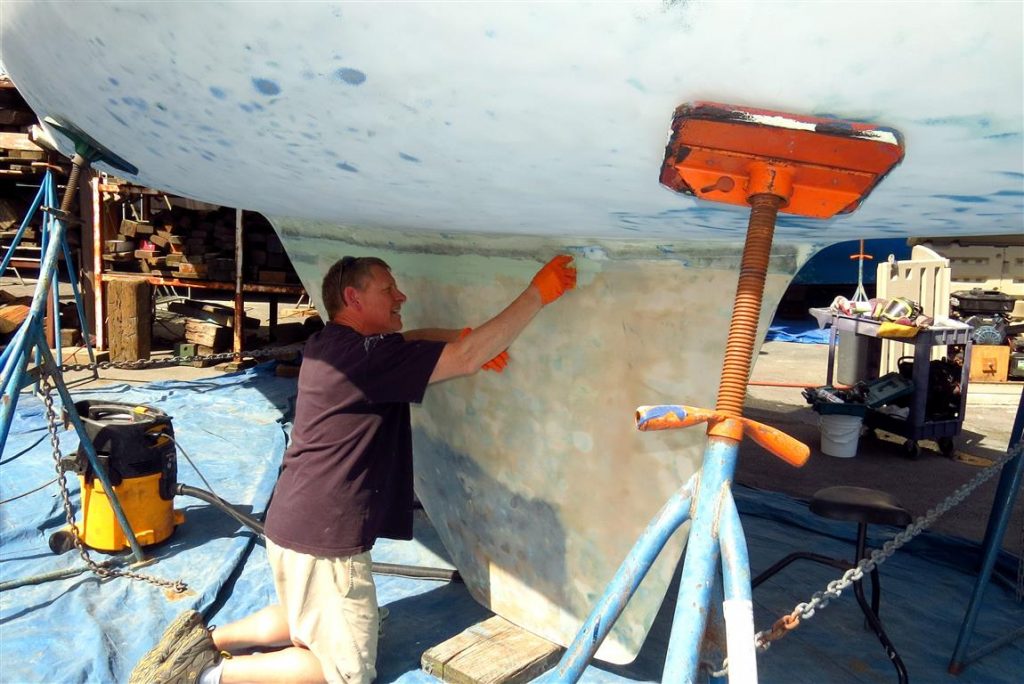 Doug Terrian, the paint lead at Gig Harbor Marina & Boatyard, applies fairing compound to smooth out the hull of “Windchaser” before giving it a race boat bottom paint finish.

“He’s a racer,” Terrian said of Windchaser’s owner as he applied fairing compound to smooth out imperfections in the Ericson 35’s hull. “He wants a fast finish and I’m trying to smooth everything out. This underwater Bondo will make a smooth body and a very smooth hull for racing.” 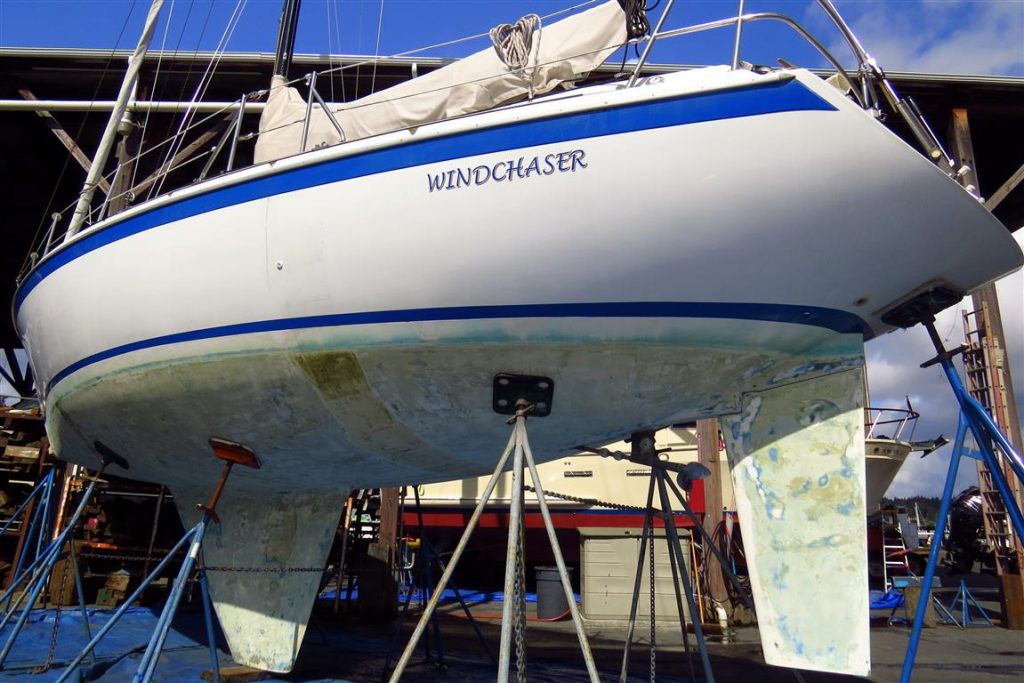 Windchaser, a frequent racer in the harbor, is a regular customer for service and maintenance at Gig Harbor Marina & Boatyard. This time she was in for a ‘race boat bottom’ paint finish before the May racing series got under way May 5.

Mordue has been bringing Windchaser to Gig Harbor Marina & Boatyard since he bought the boat 18 years ago. He brings the Ericson 35 Mark III in very two years or so for regular service and maintenance. This time, he made a change away from ablative, or self-polishing, paint. (Doug had explained to me earlier that ablative paints gradually wear away a tiny bit at a time to reveal fresh biocide as the boat moves through the water.)

“I just changed from ablative paint to Trinidad, hard paint,” Mordue said when he visited the yard one day to check on his boat. “It gives a better finish. Because it’s easier to keep clean, it actually lasts longer.” 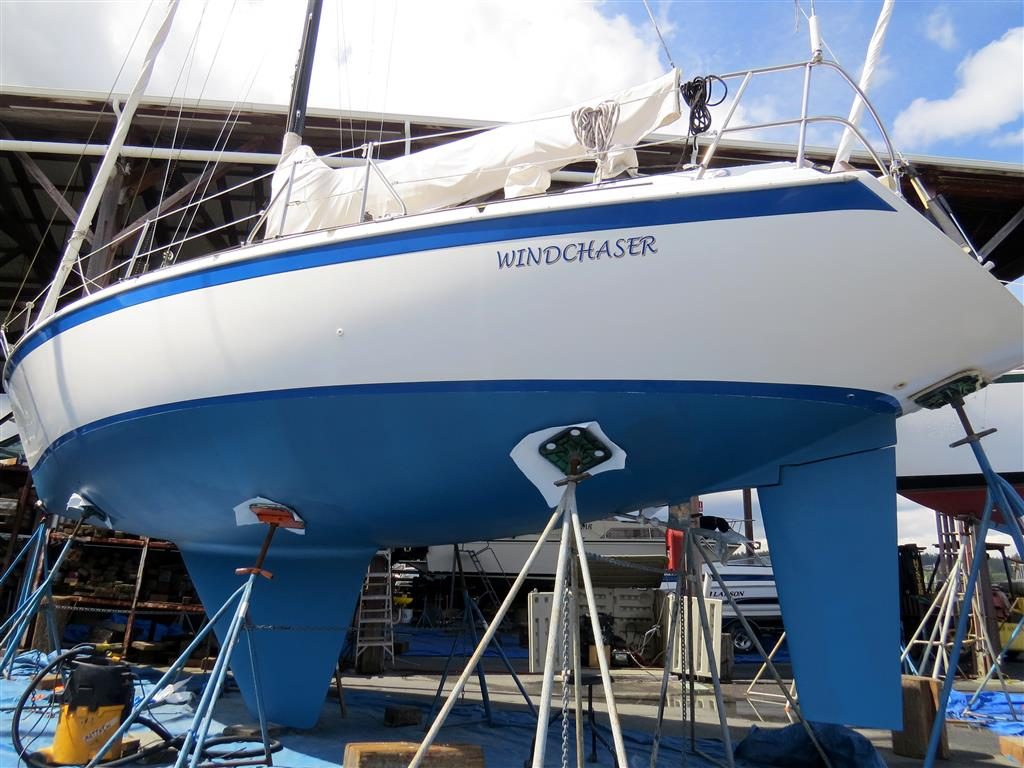 The Ericson 35 Mark III has a racing-smooth hull and fast bottom paint after a visit to Gig Harbor Marina & Boatyard.

Mordue got his boat back just in time for the first Thursday night harbor race on May 5. And so did Dr. Tom Mitchell, a Gig Harbor dentist whose boat Wildflower was at Gig Harbor Marina & Boatyard for the same treatment. Terrian explained what he was doing the day the J35C was up on stands in the yard.

“I…will get it nice and smooth and fast — a race boat bottom” — Doug Terrian, lead painter 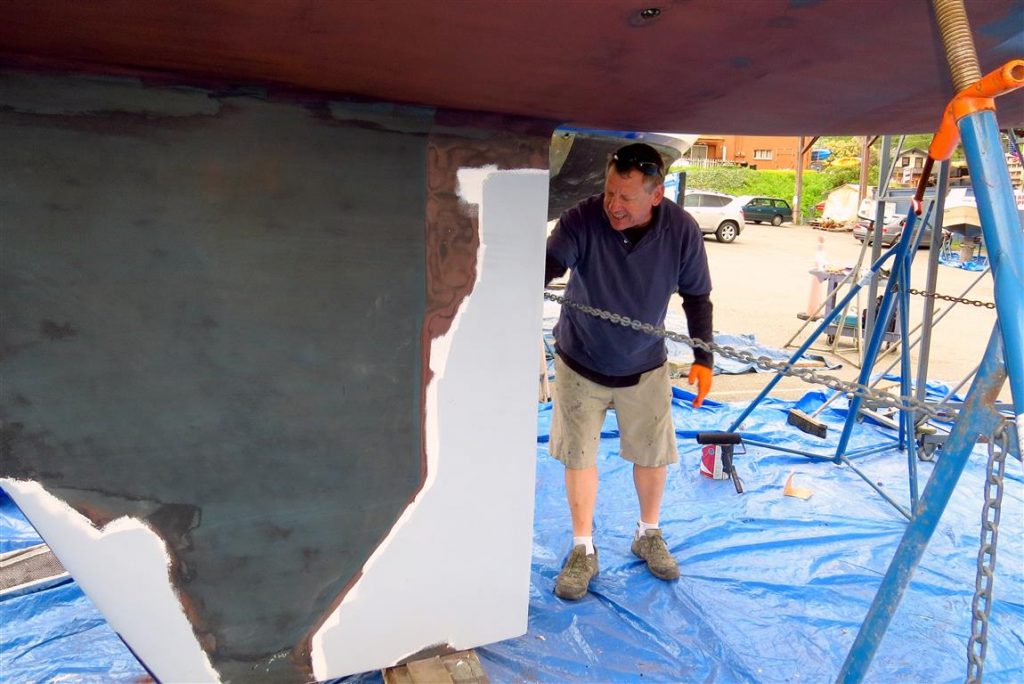 “The hull had blisters in the paint, so I ground those out,” the paint lead said. “I put some fairing compound on the metal keel and will get it nice and smooth and fast — a race boat bottom.”

“You have two colors of bottom paint so you know when to have the bottom painted again,” he said, when the under layer starts showing through. 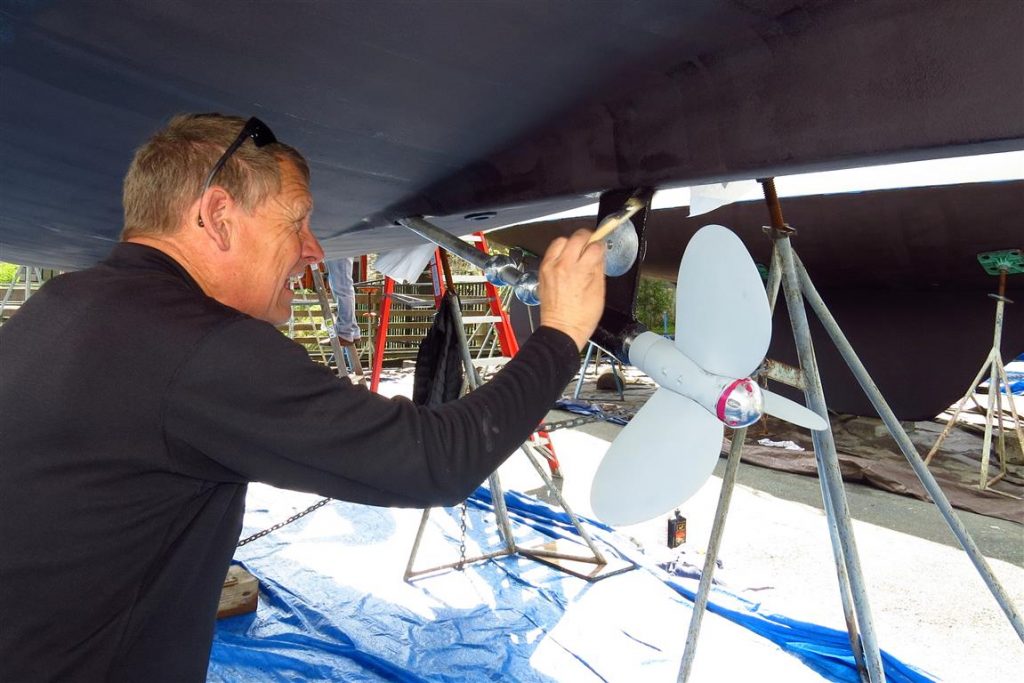 Terrian finished his explanation of the involved process for giving a sailboat a race boat bottom paint finish: “We will roll and tip the paint,” he said, meaning he will use a sponge brush and drag it along to smooth out the paint as he goes. “Then we’ll burnish the paint by lightly sanding it with a Scotch Brite pad to smooth it out even more.”

“Wildflower, a J35C from Gig Harbor, was soon made ready for the upcoming summer racing season with a fresh race boat bottom paint job.

Bring your boat in to Gig Harbor Marina & Boatyard for a fast ‘race boat bottom’ paint finish and be ready to join the fleet of racers this summer.