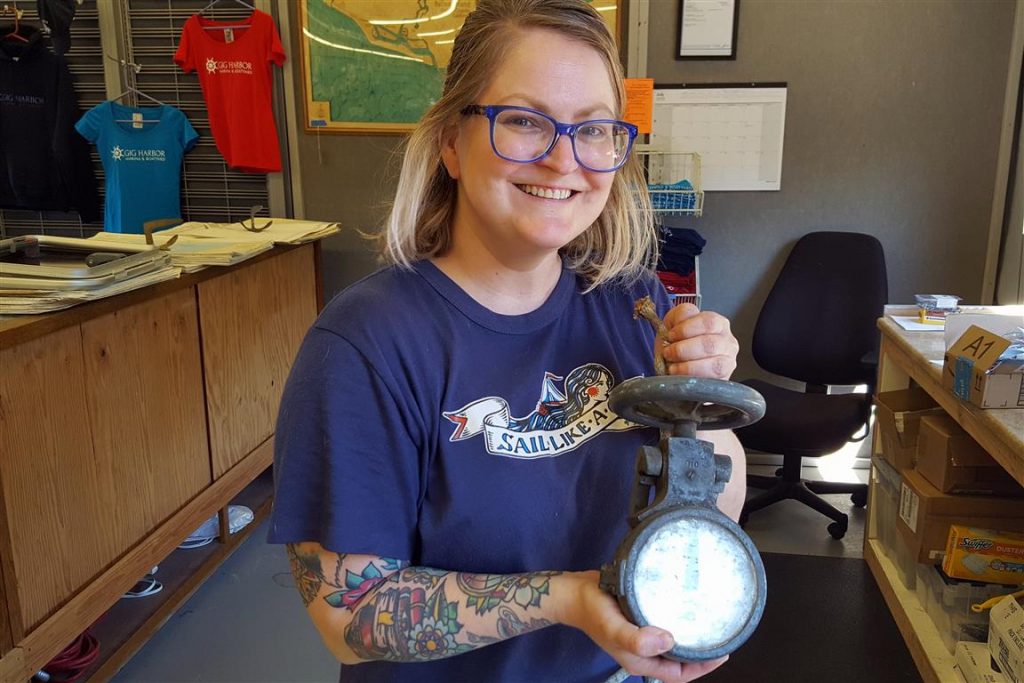 Second Wave a Trove of Treasure and Stories

Second Wave is rolling along smoothly since its June 15 re-opening here in Gig Harbor.

Shoppers are rediscovering the joy of finding buried boating treasure and consignors are finding the perfect outlet for their gently used marine equipment.

But for consignment store team member Christy Cooper, the fun of Second Wave @ the Boatyard Marine Repair and Consignment is the interesting stories behind some of the pieces that come through the door. She loves to spend time researching online not only for prices to assign the items, but also to learn about their history — and what some of them even are.

“I love it!” said Christy, who goes by Cooper to her friends. “I love it not just because we’re reopening Second Wave, but because of the community aspect. Everybody who brings things in has a story. It’s been really fun hearing everyone’s stories about their boats and these pieces of equipment.” 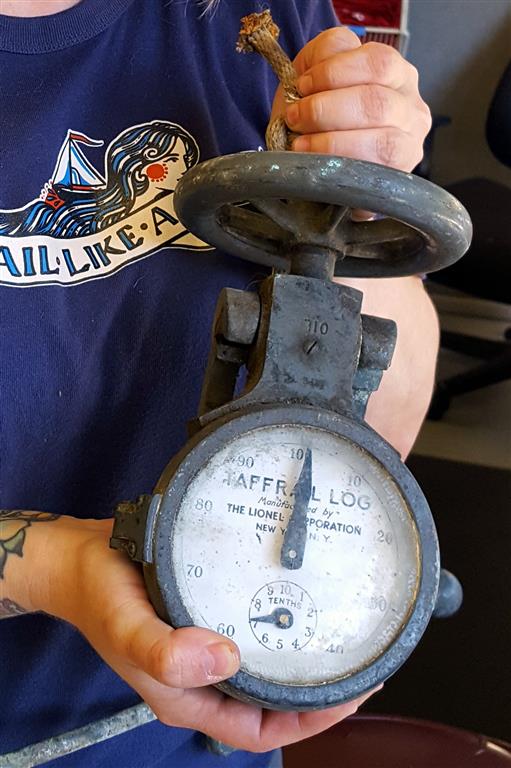 A taffrail log registers a vessel’s speed through the water.

Take for instance an item brought in for consignment this summer by Pete Carr of Gig Harbor. Carr is a collector of Navy artifacts and one piece he is parting with is a taffrail log, which sent Cooper (and this “blogger) right to the Internet for more information.

A taffrail log is a mechanical device dragged from the stern of the vessel to register the vessel’s speed through the water, according to Wiktionary. The device usually consists of a propeller, a reading unit and a stiff line connecting them.

“This was made by the Lionel Corporation, known for model trains,” said Cooper as she held up the heavy piece of equipment. “Lionel stopped making trains in 1942 and started making equipment for the Navy for the war effort. Then they went back to making trains after the war.

“This has been my favorite piece in the store so far,” says Cooper, who has been on the Second Wave team since the consignment store opened on Harborview Drive in mid June. “I’m just going to try to clean it up a bit. I love the back story on these items.”

“Everybody who brings things in has a story.” – Christy Cooper at Second Wave 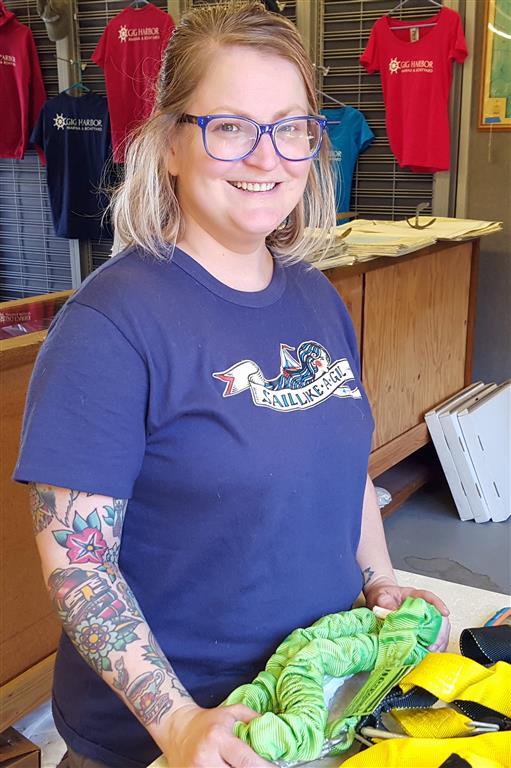 Christy Cooper knows the story behind most of the consignment items at Second Wave.

Cooper comes to Second Wave with a boatload of marine experience. Calling herself a “military kid,” she has lived all over, including Oklahoma, Alabama, Washington, D.C., Turkey and Germany. She has lived in the Puget Sound area for 20 years, most recently moving to Port Orchard from West Seattle after graduating from Seattle Central College’s Wood Technology Center with an Associate of Applied Science degree in Marine Technology.

The program gave her hands-on training in boat-building and repair and taught her mechanical and electrical systems installation and repair. Cooper learned to work on both wood and fiberglass boats, and she also served on the Technology Center’s faculty part-time, working as a teaching assistant in a women’s woodworking class where the students built wooden boats.

She would like to do more of that in the future.

“I want to eventually do more teaching of boat-building,”she says. “I love teaching beginning wood working. We introduce women to power tools.

Last summer Cooper worked at Dunato’s boatyard on Lake Union in Seattle, adding to her impressive resumé by doing boat repair and working in the yard. There she met the original Second Wave’s former manager, Patti Segulja-Lau, who told her about the store re-opening in Gig Harbor. 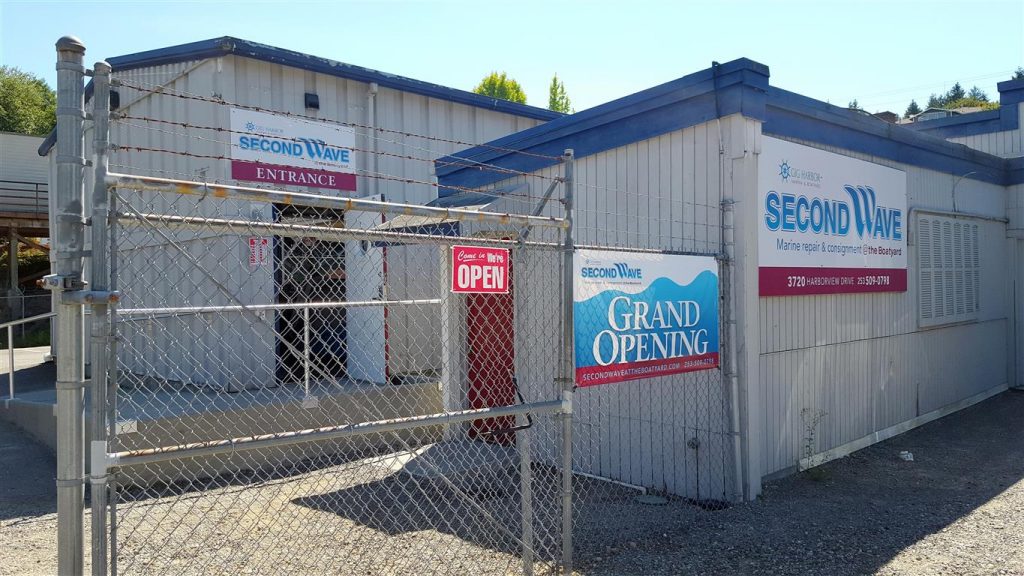 Second Wave @ the Boatyard Marine Repair and Consignment is located at 3720 Harborview Drive in Gig Harbor.

The marine repair and consignment store is a perfect fit for Cooper, but her considerable talents don’t stop there. She is an artist on the side — “I’ve been painting for forever,” she says — doing custom painting for bars and restaurants, and she is also an avid sailor, skippering her San Juan 24.

“I sail it as much as I can,” she said, standing at the counter at Second Wave, “If I’m not here, I’m either sailing or painting.”