Canoeists from U.S. Team Practice in the Harbor this Summer

This summer Gig Harbor has become the training ground for the country’s top canoe and kayak paddlers, many of whom have their sights set on the 2020 Olympic Games in Tokyo.

They are Team USA national canoe and kayak athletes made up of three or four different age groups in men’s, women’s, junior and para-canoe and kayak competition. They are practicing in the harbor under head coach Aaron Huston with the Gig Harbor Canoe and Kayak Racing Team (GHCKRT) this July and August as they prepare for national and world competition. 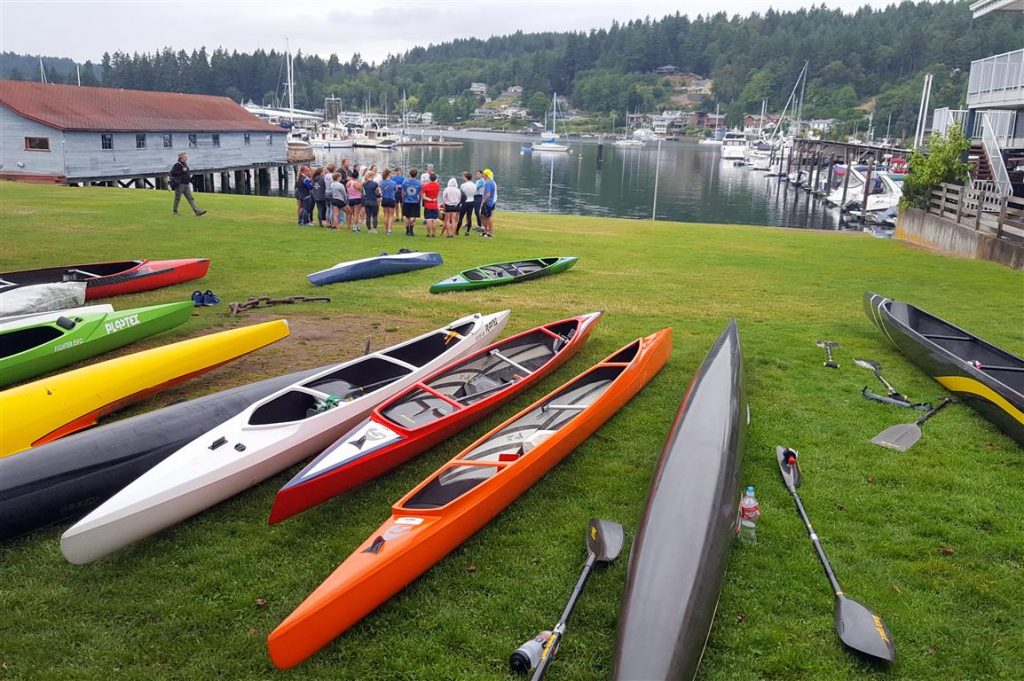 Team USA is practicing in Gig Harbor this summer for national and world canoe and kayak competition. They are set up in the back corner of Skansie Brothers Park, next to Gig Harbor Marina & Boatyard.

Various team members are competing in the Pan-American Games in Lima, Peru, at the end of July while others travel to the Junior U23 World Championships held in Romania. Then they all come together again for the summer’s big prize: the USA Canoe and Kayak Sprint National Championships at Lake Lanier near Atlanta, Ga., Aug. 7-10. 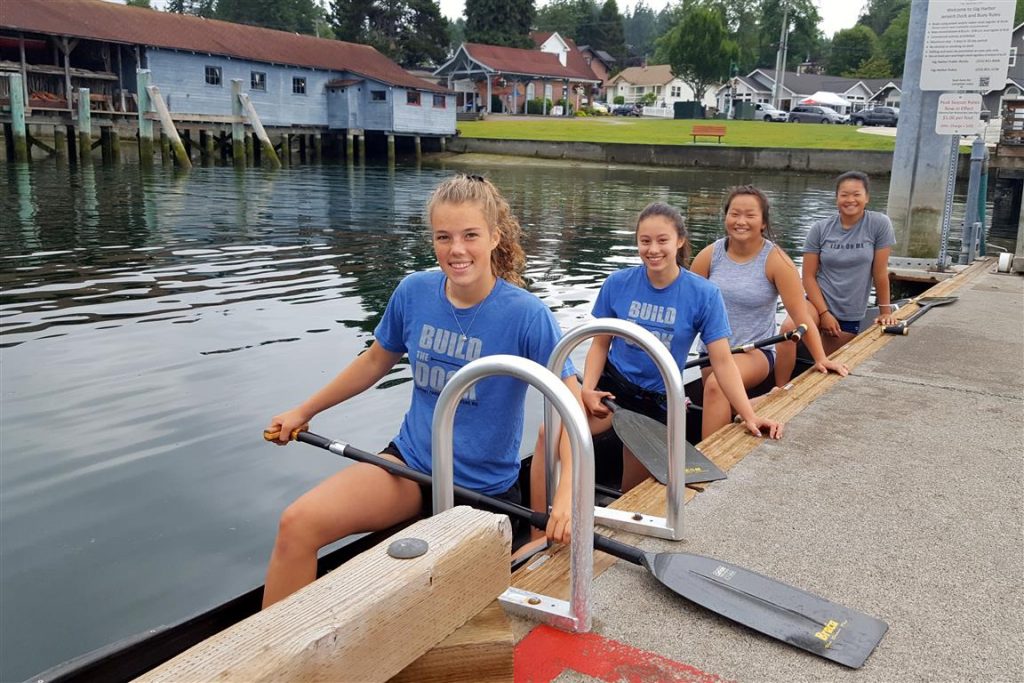 Members of the Gig Harbor Canoe and Kayak Racing Team get ready to push off for a training session in the harbor. Their T-shirts urge the city to “Build the Dock” in reference to the Ancich boat storage building being finished but not yet the dock needed for the building to be useful.

The GHCKRT team is looking to capture its seventh national champion title in the past eight years. They are the returning national champion after beating tough rival and home team Lanier last year for the 2018 title. That is no easy task, competing against a home field advantage of a former Olympic venue that the Lanier club trains on, says coach Alan Anderson who founded Gig Harbor’s Canoe and Kayak Racing team 17 years ago.

“When we won the national championship there five years ago we were the only team that had ever gone into Atlanta and won,” said Anderson proudly. Excitement is running high on the team to see if they can do it again. 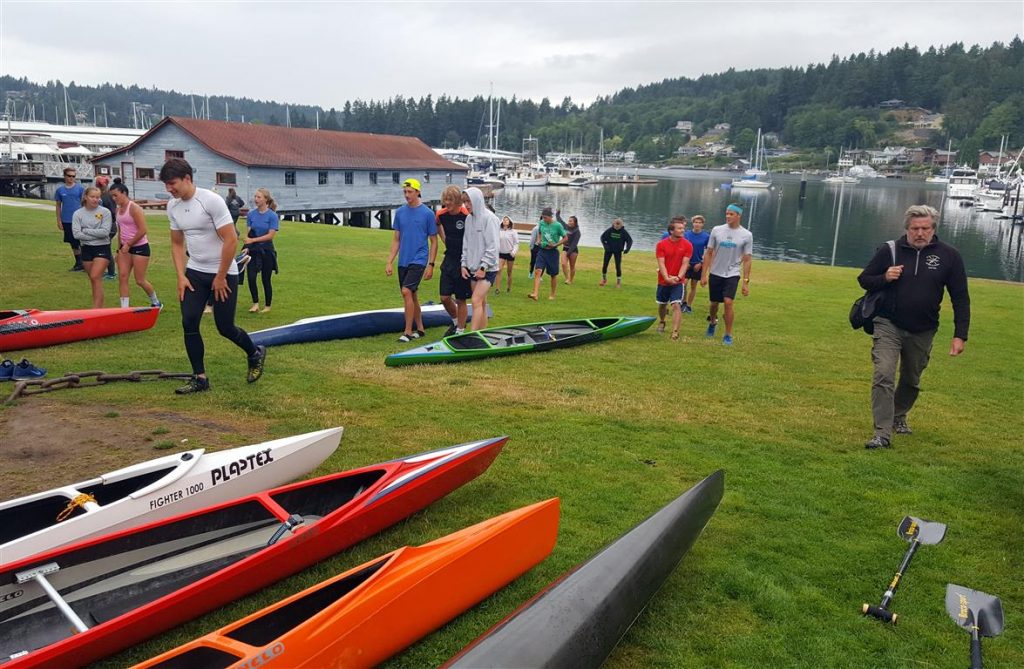 Coach Alan Anderson, on the right, gets ready for an on-the-water training session with Team USA canoe and kayakers.

“We know it’s going to be a tough battle but we’re excited to go in there and try our best,” echoed coach Huston in a story in the Peninsula Gateway. 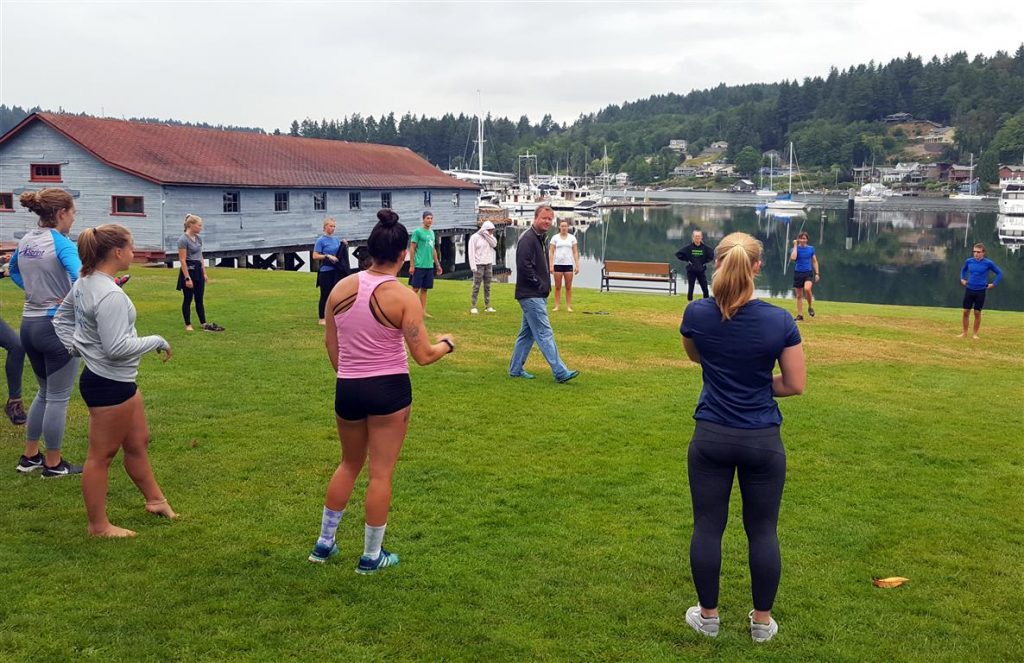 It’s a dedicated staff and team who share a love of being on the water and working toward common goals through lots of hard work, say coaches and athletes alike. Team USA’s nearly 50 paddlers — many are out-of-towners staying with local residents — have nine water practices a week and three to five gym sessions a week.

“These are dedicated athletes,”says Huston, who is no stranger to dedication himself. His day — and night — job is working as a nurse practitioner and he sometimes arrives at Skansie Brothers Park for morning practices straight off a night shift without any sleep in between, says kayaker Emma McCoy from Bellingham, who is training here this summer. 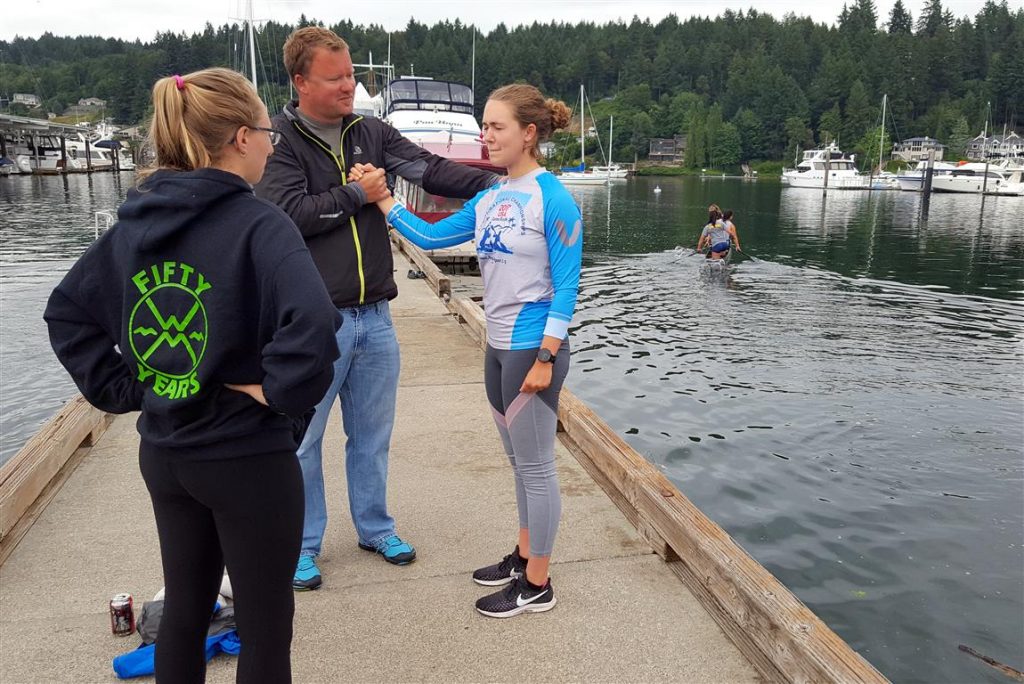 Coach Aaron, a nurse practitioner, helps kayak paddler Emma McCoy with a sore shoulder prior to a training session.

“Coach Aaron is like a juggernaut,” says McCoy, 18, who is competing at the Junior World Championships in Romania. “It’s definitely about the kids. For him, it’s about us loving what we do. I’ve always felt welcome here with the Gig Harbor Canoe and Kayak team.” 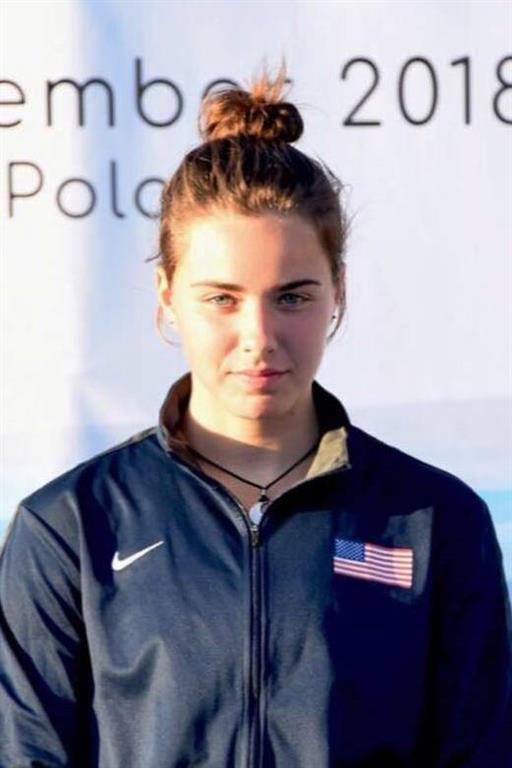 She is one of many athletes from out of town training in the harbor. As coach Aaron says, “all the top women canoeists in the country are here,” and that includes 17-year-old Nevin Harrison of Seattle. She is the U.S’s top female canoeist and hopes to be the first-ever medalist in women’s Olympic canoe competition when it debuts as a new Olympic sport in the 2020 Tokyo Games.

The senior at Roosevelt High School in Seattle earned four canoeing gold medals, two each in the 200- and 500-meter, and a silver medal in the 1000-meter at the Olympic Hopes Regatta. Through these excellent performances Harrison was selected for participation with Team USA at the Pan-American Games in Peru going on as this blog is being posted.

Her journey to the 2020 Olympics includes a stop at the Senior World Championship in August, then the Pan-American Championships next May.

“If I were to win that, then I would get an Olympic spot,” Harrison told the Tacoma News Tribune.

Around all their training time on the water and in the gym, the team stays active with service to the Gig Harbor community, which they love being part of, say coaches and athletes. For the past several summers the canoe and kayak team has held a day camp dedicated to helping kids experience the love of water sports. They also help with set up of the weekly Waterfront Farmers Market in Skansie Brothers Park.

With Team USA practicing right here in Gig Harbor’s front yard this summer, we’re all getting an up close and personal glimpse of Olympic dreams and excitement. Of young people with drive and goals and a passion for self-improvement and achievement. Of dedication and hard work. 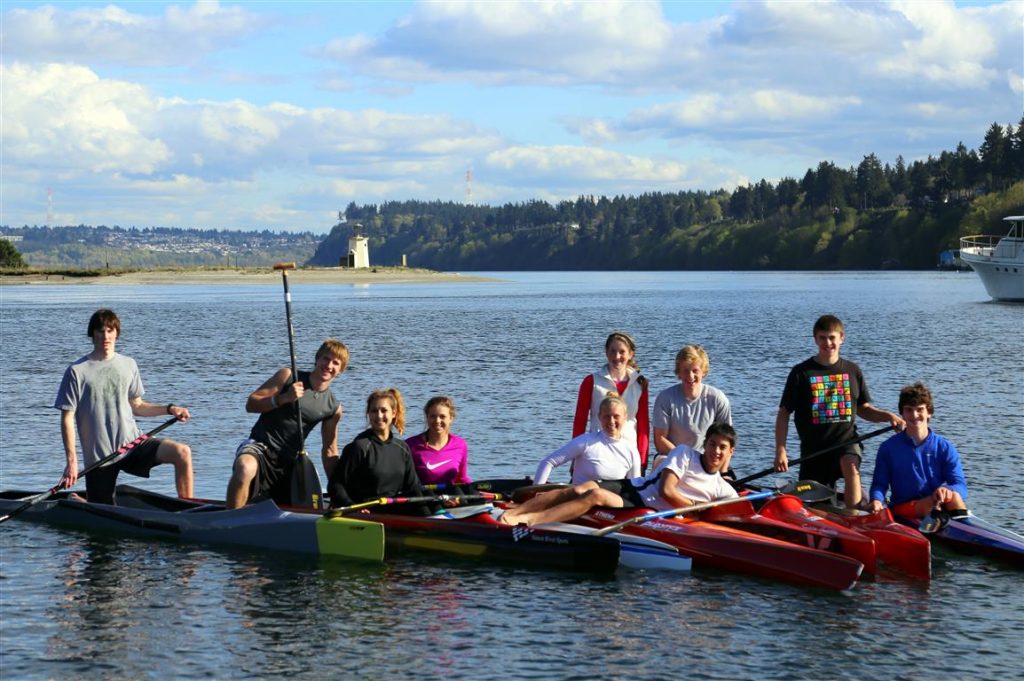 When we sit watching the Olympics on television every four years, transfixed by incredible athletic ability and skill, we marvel and wonder: where do these phenomenal people come from?

They come from here. You should be proud, Gig Harbor.