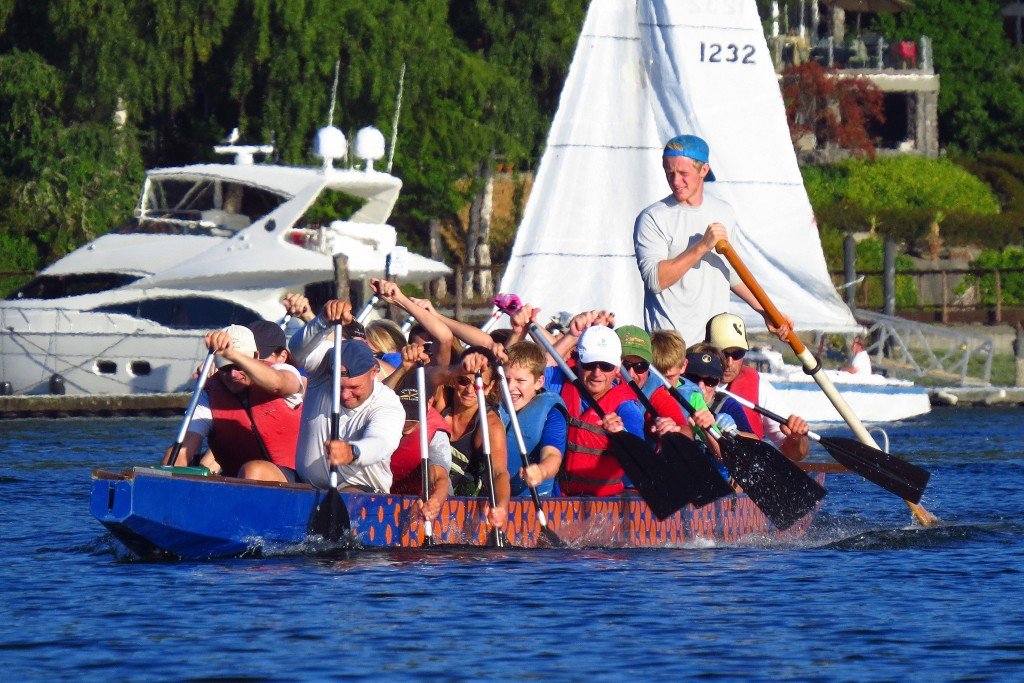 The Gig Harbor Dragon Boat race team may be a bit more bundled up these days than they were in this summer photo, but “the beat goes on” as the new paddling team heads into fall practices.

The team was formed this past summer when Gig Harbor Marina & Boatyard bought a dragon boat — complete with the all-important drum that provides the “pulse” keeping paddlers in rhythm — after the idea caught fire during the annual Paddlers Cup last April. The Tacoma Dragon Boat program brought two of their team-paddling boats over for exhibition races during the fourth annual competition sponsored by the Gig Harbor Canoe & Kayak team and breathed fire into an idea for the Maritime City to get its own boat.

“By the end of the day, we were all in this wonderful, winning boat,” organizer Sharon Shaffer told The Peninsula Gateway in July.  “We need this in Gig Harbor,” she decided that day along with Mayor Jill Guernsey, who was also in the winning boat. Shaffer now coordinates the Gig Harbor Dragon Boat race team with a few other dedicated paddlers. 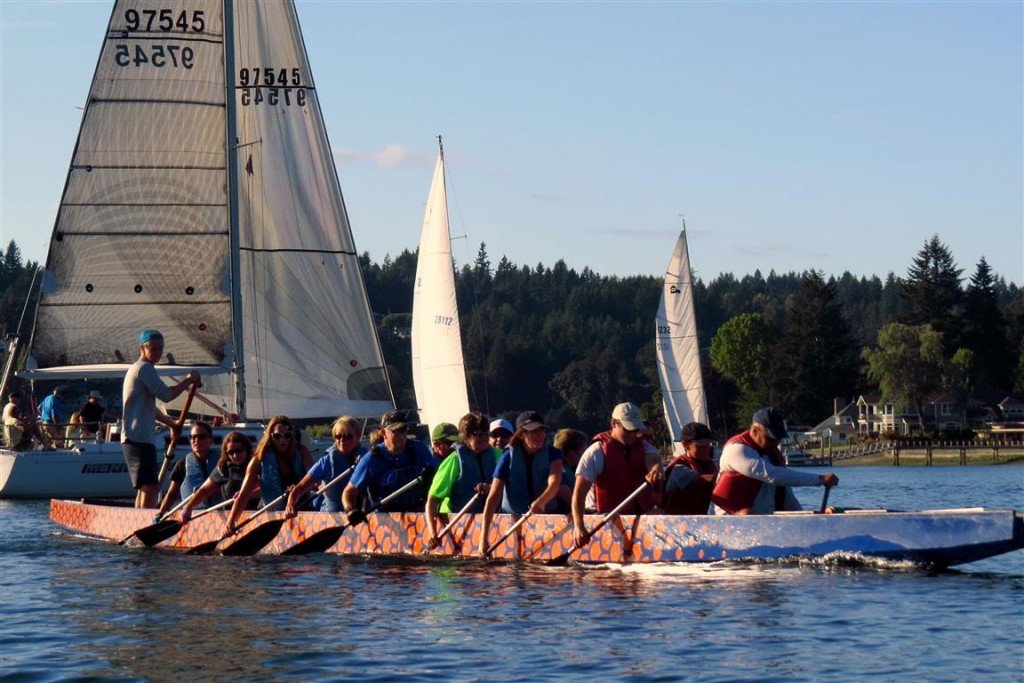 The Northwest Maritime Academy, which has classrooms for a variety of seafaring training at Gig Harbor Marina & Boatyard, now owns the dragon head-adorned boat and allows the city team to use it. The Coast Guard-approved academy is planning  to use the dragon boat for team-building exercises during some of those trainings. Participants learn teamwork and gain camaraderie from working together to paddle in unison to the beat of the traditional Chinese drum in the bow.

Shaffer gave a wrap-up of the team’s inaugural season:

“Summer league was awesome,” she commented in an email. “We had about 35 paddlers — not rowers, as Coach Holm (Schmidt) explained to us. Rowers always go backwards, paddlers always go forwards; we are paddlers. We have learned a great deal of technique from Coach Holm, as well as from our student coaches (from the Canoe & Kayak team), Austin and Andrew.  Mostly we are getting really good at working in unison. Coach tells us when we look like a caterpillar — that is not a good thing.”

Members of the Gig Harbor Canoe & Kayak team sat in on practices with the city dragon boat crew this past summer to model correct paddling technique and help coach the new team.

Mayor Guernsey, who christened the dragon boat at Gig Harbor Marina & Boatyard in July, agreed that the local paddling team made a lot of progress under the experienced coaching during the summer. “It was a great summer season, ” she said. “Of course (we) are a smooth-paddling machine (as opposed to a ‘caterpillar!’) It is great fun and a way to meet people and get exercise.”

Summer practices were held each Thursday at 6 a.m. and 6 p.m., with some dedicated paddlers occasionally attending both sessions, Shaffer said. 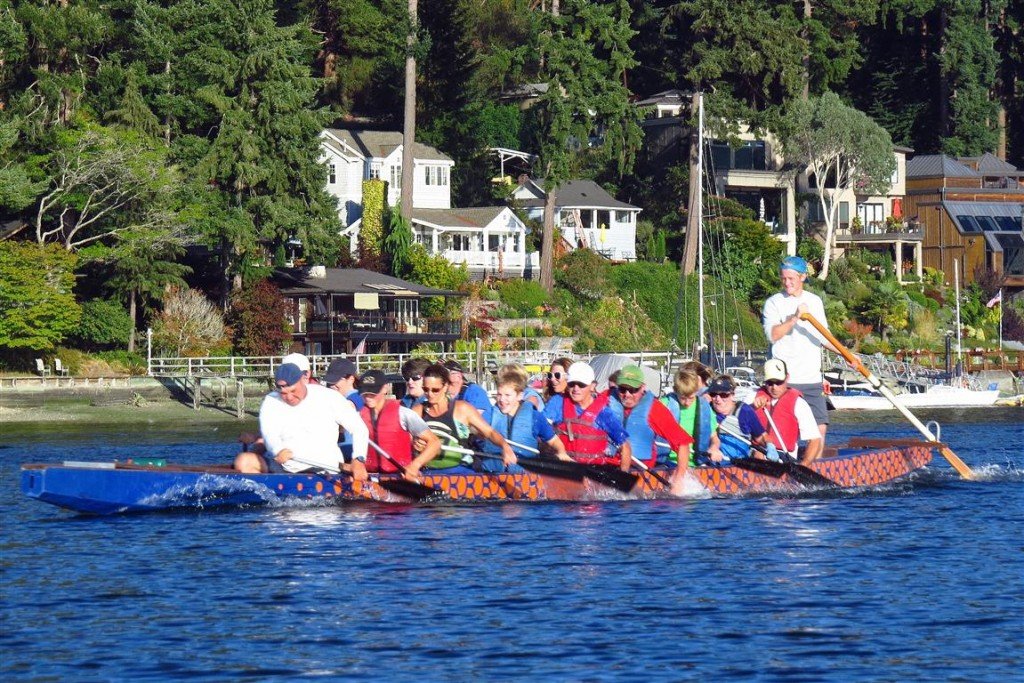 “We practiced through the glorious weather of summer to prepare for our race in September at the Donkey Creek Chum Festival,” Shaffer continued. “The Chum Festival was a win-win for the Gig Harbor Dragons!  We took both first and second place — of course, there were only two ‘boats’ in the race and we divided our team to compete against ourselves.  In fact, we only had the one boat, which Ron (and the Maritime Academy) lets us use, so one group paddled the race course, then the other group raced the same path and we compared times. We seriously need to find a second boat so we can actually have two boost races.  Still, we had fun — and we were all winners.”

“We Dragons were lucky that day,” Shaffer added. “Besides being granted use of the beautiful boat, we were also gifted beautiful team shirts by Tickled Pink,” a Gig Harbor boutique.

Registration for the upcoming dragon boat season opened in mid-September and fall practices started on Oct. 1 out of Skansie Brothers Park, next to Gig Harbor Marina & Boatyard.  Paddlers may choose from with two sessions:  Saturdays at 10 a.m., or Thursdays at 6 p.m.
“At practice we work on technical things, “Shaffer said.  “How to pace ourselves, how to hold the paddle, correct posture and paddling form, degree of power and timing. We also work on endurance. Mostly we stay in the harbor– but we do venture out into the “big” water. Occasionally, we take breaks and enjoy the beauty and chit-chat.  Watching the sunrise out in the sound is breath-taking.”
The team will continue to practice through the winter in preparation for races in the spring and summer. The group is always looking for new members, said Shaffer.

“We see the team continually growing and maintaining diversity,” the team leader said.  “Currently, we are all adults from 40ish to 70ish and range from recreational up to highly competitive paddlers. Some team members may also be signing up for advanced training in the Masters. That’s an age group of over 30, I think with the Canoe & Kayak race team. “
“We are a group of people who really enjoy each other,” Shaffer went on.  We have now had two team parties with the intent of keeping this fun and building relationships — especially since some of the early a.m. paddlers never see the later-in-the-day paddlers.”