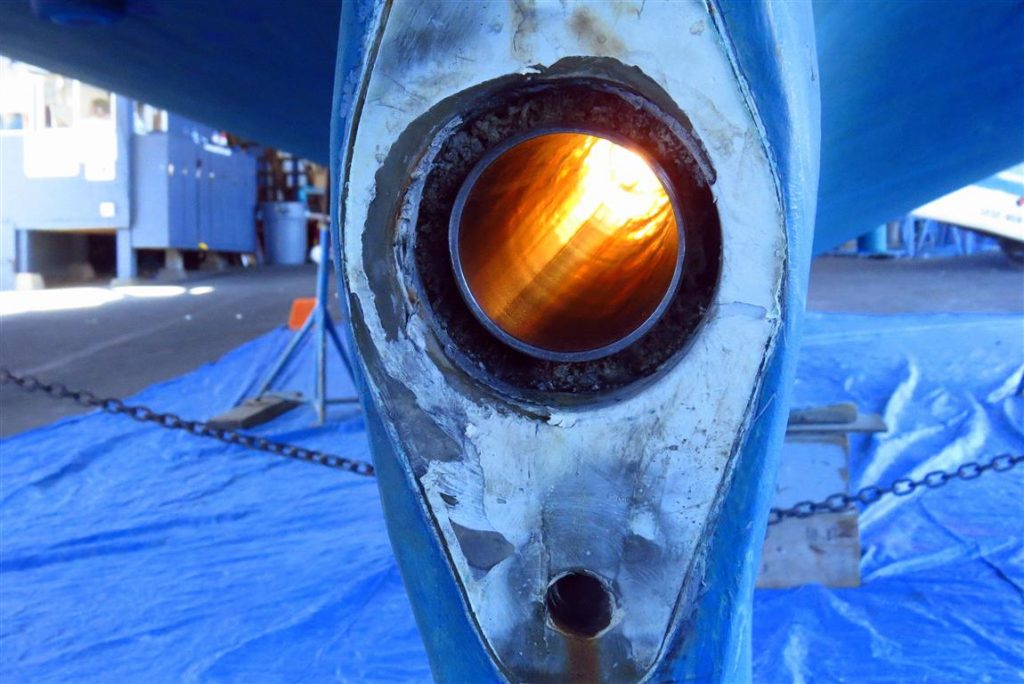 The crew at Gig Harbor Marina & Boatyard is finishing up a fairly technical fix in a more than fairly inaccessible area on a Ponderosa 42 this week.

Ka De Lin, owned by Bob and Linda Kimbrough of Gig Harbor, has had a persistent leak with water appearing under the generator. It was in an area with no direct contact to the hull, but water was filling up the keel void until it leaked into the engine room, said Boatyard Manager Mark Lindeman.

Investigation revealed that a hole corroded through the stainless steel stern tube about 22 inches forward of the propeller. Electrolysis caused the tube to corrode, and then a collision broke the bond, Lindeman added.

“It was like working in a gun barrel.” – Boatyard Manager 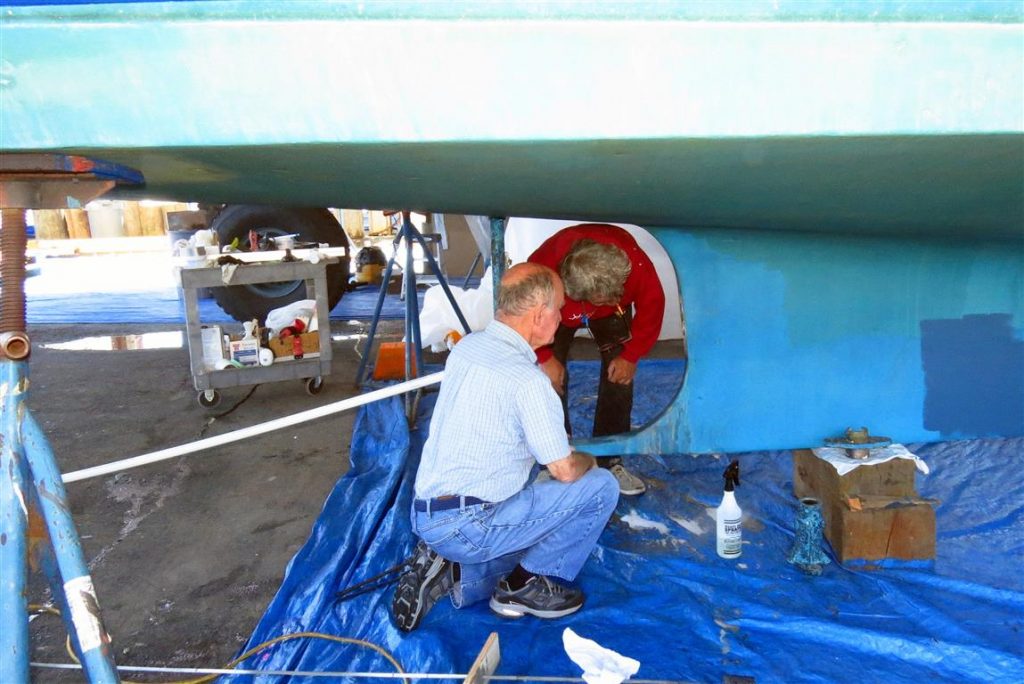 “We needed to figure out if we could fix that hole,” said Lindeman. “It was like working in a gun barrel.”

Boatyard technician Carl Conner took the lead on the job. First, the guys drilled a hole and they discovered the area was filled with concrete, so it wasn’t accessible from the outside. Since the crew couldn’t get to the hole to fix it, a plan was devised to fabricate a stainless steel sleeve for inserting into the stern tube.

“We took a piece of stainless steel tubing to a machine shop and they machined it to the inside diameter of the stern tube,” said Lindeman.  “The sleeve will be inserted and slip-fit into the existing stern tube where it will be set into epoxy, thereby sealing the hole.” 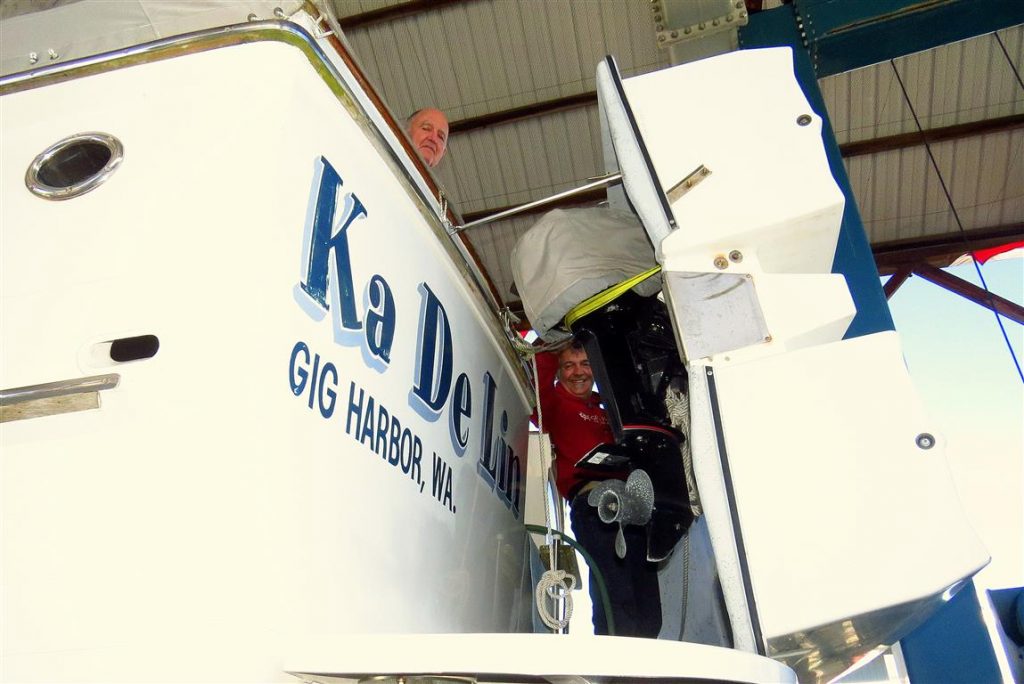 Kimbrough, left, who has owned the 1985 Ponderosa for 24 years, and Conner pause in their work on “Ka De Lin.”

The boatyard now has all the parts and materials to complete the job, Lindeman reported earlier this week.

“That includes honing the stern tube to remove marine growth and corrosion in preparation for installing the full-length stainless steel sleeve. We will weld it into place and it will be waterproof and secure.”

“It was a pretty technical fix,” Lindeman continued. “You’re working in an area not easily accessible and the stern tube is not easily replaceable. Repairing the leak from inside the tube was the logical fix.”

Bob Kimbrough, a past commodore of the Gig Harbor Yacht Club, has owned Ka De Lin for 24 years. He and his wife have taken her up into the San Juan Islands numerous times for summer cruising, but now it’s time for someone else to take over the helm. They have someone interested in buying the stately 1985 boat, but it’s with mixed feelings that they close their era with her. 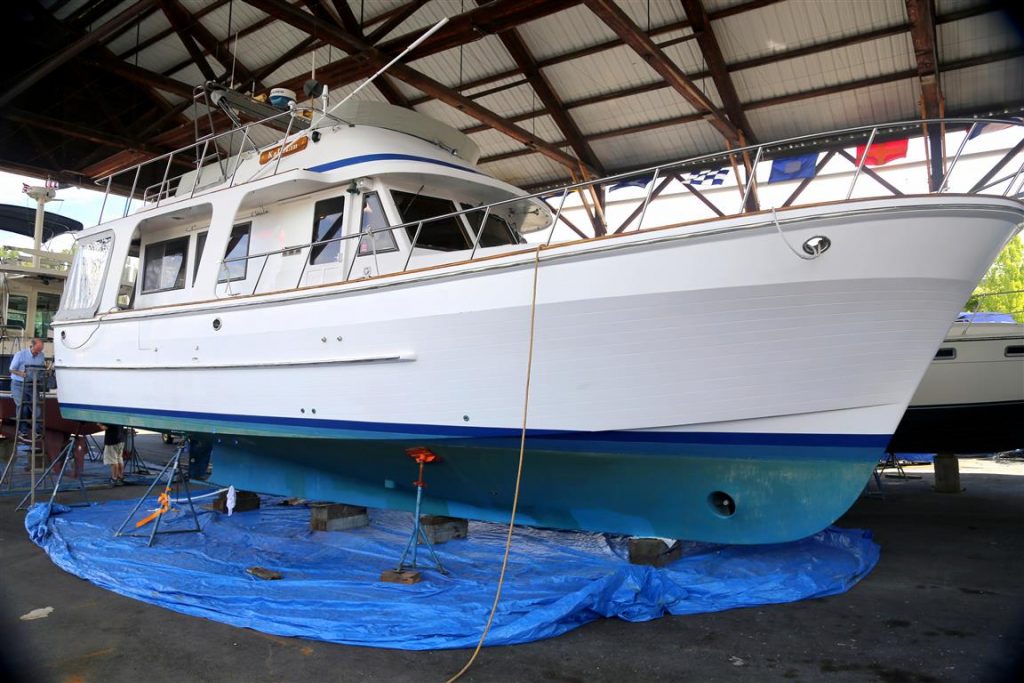 The boatyard crew is almost finished with their stern tube leak repair on the stately Ponderosa 42.

“It’s a great boat,” Kimbrough said on a recent day when he was at the yard. “The original owner had it custom built and you can’t find a boat like this anymore. It’s got a lot of use left in it.”