Chef Sunshine Dunning and crew have re-opened The Trolley @ the Boatyard this spring and downtown Gig Harbor is basking in the glow of amazing aromas.

I stopped by Gig Harbor Marina & Boatyard yesterday, thinking my only mission was to snap a few photos of Yardbird, our iconic Thunderbird sailboat that marina staffers like to race on Thursday nights. The ‘bird is on the hard for some bottom cleaning and other routine tasks ahead of the upcoming Harbor Series of sailboat races. I wanted to collect a few pictures for an upcoming blog.

Well, I didn’t get much further than stepping out of my car before tantalizing aromas of The Trolley washed over me like sunshine. And it was Sunshine — Chef Sunshine Catering cooking up amazing food under its new management of The Trolley @ the Boatyard this season.

The Trolley @ the Boatyard is now open five days a week under the management of Chef Sunshine Catering out of Port Orchard. Chef Sunshine Dunning looks out The Trolley window in the photo at top.

I immediately added another to-do to my mission at the boatyard and followed my nose to The Trolley. If you haven’t tried Chef Sunshine and team’s food yet, you’re in for a treat. I had the Grass-fed, All-natural Beef Burger with its side of flavor-filled Rosemary Garlic Fries and I was in bliss.

With bacon, balsamic grilled onions, Tillamook cheddar and some kind of heavenly special sauce, it’s way up there on the Best Burger Ever list. I can’t wait to try the Panko-crusted Alaskan Cod Fish & Chips or the Loaded Mac and Cheese featuring Beecher’s aged Cheddar, Buffalo chicken, Gorgonzola and bacon. Now that is loaded.

Until May 11, Trolley hours are:

Chef Sunshine and crew opened The Trolley earlier this month with their “soft opening” going on five days week until their big grand opening set for Saturday, May 11. After that, full summer hours will be announced. 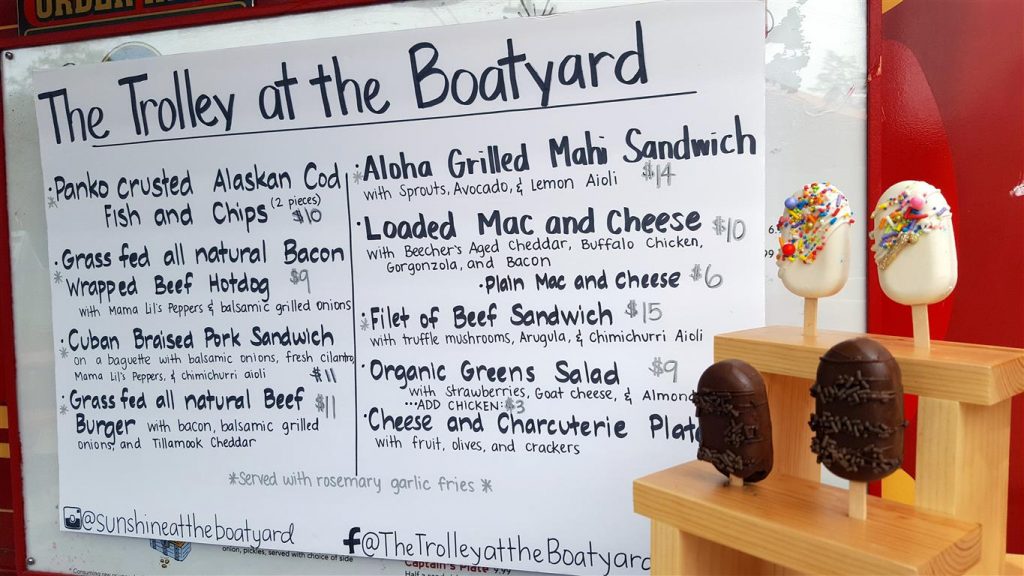 Be sure to top off your fantastic meal at The Trolley with a delicious “cakesicle” by Harbor Cakes.

During the soft opening, Sunshine is serving a limited menu of fantastic offerings until her full menu starts on the grand opening.

But wait, it gets better. You can also stop by at 9 a.m. while The Trolley is getting set up for the day and grab a cup of steaming coffee, fresh coffee cake by Harbor Cakes and donuts by Top Pot Doughnuts. A perfect way to start the day.

And about that fantastic burger I had: You’d think it might have occurred to me to take a picture of the mouth-watering masterpiece, but no. It didn’t. So focused was I on diving in. I’ll just have to visit The Trolley for my next round of Sunshine again soon.

The Trolley @ the Boatyard is located at the entrance to Gig Harbor Marina & Boatyard, 3117 Harborview Drive in downtown Gig Harbor.