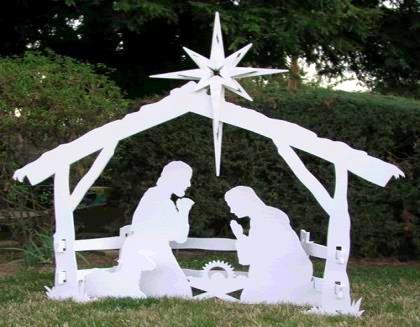 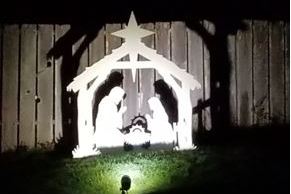 HERE’S ITS STORY & WHERE TO FIND IT!

Guest Blog by Elizabeth Kreiselmaier, Ph.D. on behalf of the original

Christmas is fast approaching and by now you’ve seen/heard that the Downtown is beautifully bedecked accordingly, including the addition of a brand new & award-winning Traditional Christmas Nativity display at Gig Harbor Marina & Boatyard this year!

But you may also have noticed that something is missing…. 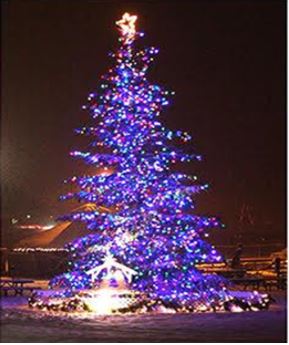 For the many who’ve missed seeing THE ORIGINAL and HISTORIC NATIVITY DISPLAY at the foot of the City’s own Christmas Holiday Tree Display in Skansie Park, and who may be wondering what happened to it & where to find it, we’ve got an important update for you from the ORIGINAL GIG HARBOR NATIVITY GROUP (aka the “Sons of Thunder” Nativity Group, founded 10 years ago by John Skansi and James Franich, and assisted this past year by Elizabeth Kreiselmaier—all pictured below, John is standing). 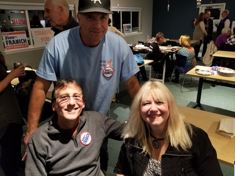 By way of background, Skansie Park property was owned by the Skansies (one of Gig Harbor’s “founding families” who happened to be Catholic) from 1908 till it was acquired by

the City in 2002.  In 2006, John Skansi, a relative, got permission from the City to lend a Nativity Scene, along with other secular Christmas decorations, to the City each year for inclusion in the City’s own Tree Display in Skansie Park.

This was done in commemoration both of the Christmas holiday itself, of his family’s Christian heritage, and of Gig Harbor’s Croatian, Swedish and Norwegian roots. And so began the 10-year tradition that our community has so enjoyed and looked forward to each year.

That is, until last year (2016) when the City received legal threats from an out-of-state atheist group, and as a result, decided to ban the Nativity Scene last year (and again this year) from the foot of the Tree in Skansie Park.  The City’s new plan was to go for a “clean, crisp look” by erecting a tree with lights only in Skansie Park—-no Nativity, no Reindeer—-just a lighted tree.

Since November of 2016, the Sons of Thunder Gig Harbor Nativity Group and its Nativity Core Leadership Team, set themselves to the task of persuading the City to reinstate the original, historic Nativity Display by demonstrating not only that it was the clear will of the people to do so, but also that legal case law, from the U.S. Supreme Court on down, clearly supports it.

Despite the group’s collection of over 1100 signatures in just 3 weeks, the testimony by many citizens at a packed City Council Meeting on October 23, 2017, and clear written and verbal delivery of both the legal basis and the historical rationale for the City’s incorporation of what would have been the donated Skansi Nativity Display into its own Christmas holiday display, the Council voted against it once again.  The City’s stated preference was to eliminate ALL Christmas-related items from the foot of the tree in the public park, including the historic Nativity.

Seeing Gig Harborites’ substantial disappointment with this outcome prompted Gig Harbor Marina & Boatyard owner Ron Roark to graciously offer an alternative site for the original Nativity this year, right next door to Skansie Park on the boatyard’s private property.  This was a lovely gesture, which was and is much appreciated by all nativity display supporters, including the Sons of Thunder Gig Harbor Nativity Group! 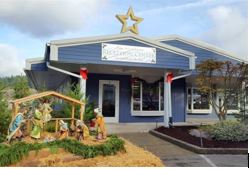 At about the same time as Ron made his kind offer, a para-church organizer, Gary Wiens of Burning Heart Ministries, assembled a small group of local Christians including a couple of pastors and business owners, to sponsor what grew into an expanded vision of the original plan for an alternative Nativity display, both outside and within retail space at the boatyard.  In essence, Gary’s newly formed Nativity group focused on the creation and promotion of explicitly religious Christmas displays and activities within the privately owned and rented storefront designated as their Reception Center with the banner, “Let Earth Receive Her King!”

The original Gig Harbor Nativity Group (Sons of Thunder) recognizes these alternative activities as wonderful expressions of Christmas cheer in the Harbor, and encourages Gary’s group 100% in its efforts to carry them out.

At the same time, the Sons of Thunder Nativity Group remains true to its original purpose of reinstating the original and historic Nativity Display at the foot of the City’s tree in Skansie Park for 2018 and beyond.

“I would say that the results of the recent November 6th election are very encouraging to the cause of bringing the Nativity back to Skansie Park.  We are especially hopeful that the new administration will restore the original Nativity to its rightful home in Skansie Park going forward.”

With respect to this goal, group members see good reason for that optimism, as well as a clear path forward, which for this year, meant the selection of a different, private location for display of the original, historic Nativity:

“Given our goal, and our desire to remain in full compliance with U.S. Supreme Court rulings and case law on the subject, we felt it best to give Gig Harbor’s traditional, historic Nativity a ‘temporary home’ for this year in a private, non-church-or-religiously-affiliated venue.  Doing so keeps us from inadvertently impeding our own efforts to reinstate the Nativity within the City’s overall Christmas display next year, along with other, secular symbols of the season, as called for by the U.S. Supreme Court’s “Reindeer Rule.”  Also, the Courts tend to take history and display-contexts into consideration when ruling on placement of Nativity Scenes on public property, so we kept that in mind when deciding where to place the original Nativity this year, given the Council’s decision.  And of course, we do remain hopeful that the newly elected City officials will see fit to honor the overwhelming will of the people on this issue, as it is both legal and feasible for them to do so.  The people spoke, the legal basis is there, and we have good reason to be optimistic.” 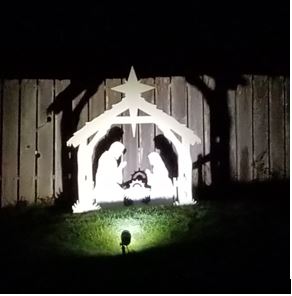 So in the meantime, for this 2017 season, look for the original, historic, Skansi Nativity scene to be displayed simply and beautifully in front of the Franich home, located at 3702 Harborview Drive…..and then, be on the lookout, hopefully, for it to be welcomed back in time for Christmas next year, at the foot of the City’s Skansie Park Tree, for 2018 and beyond!

What a wonderful Christmas gift to the community that would be!