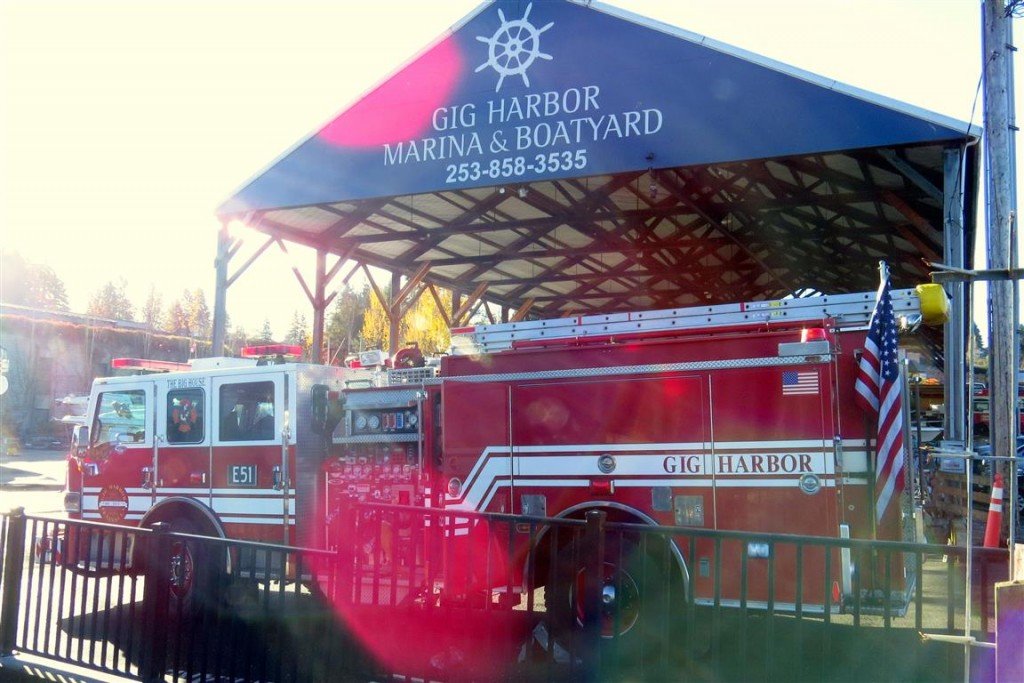 Gig Harbor firefighters hurried down the dock past rows of moored boats at Gig Harbor Marina & Boatyard on Veterans Day this week to conduct a fire training drill in a vacant slip. 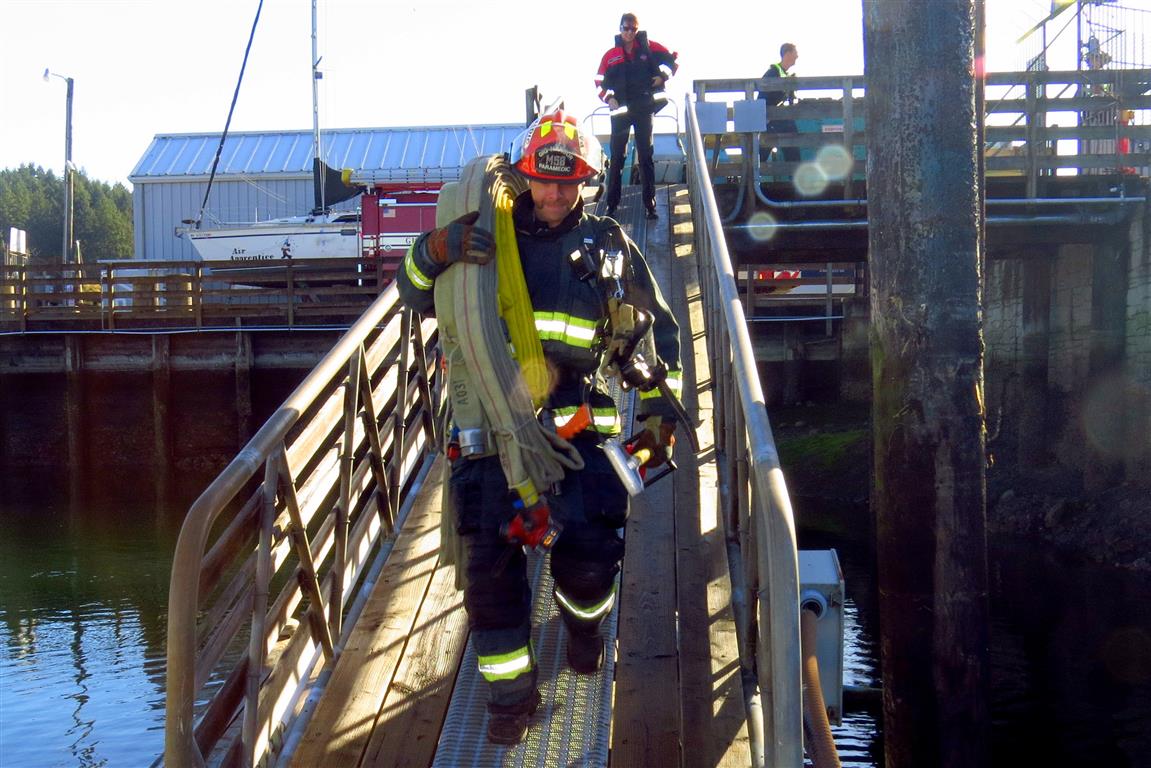 Firemen from the Gig Harbor Fire Department conducted the drill to check water pressure and connections from a marina standpipe to a fire hydrant on the bulkhead overlooking the moorage full of pleasure boats. Firefighters carried several yards of fire hose draped over their shoulders as they hustled past boats to connect to a standpipe near the empty slip. 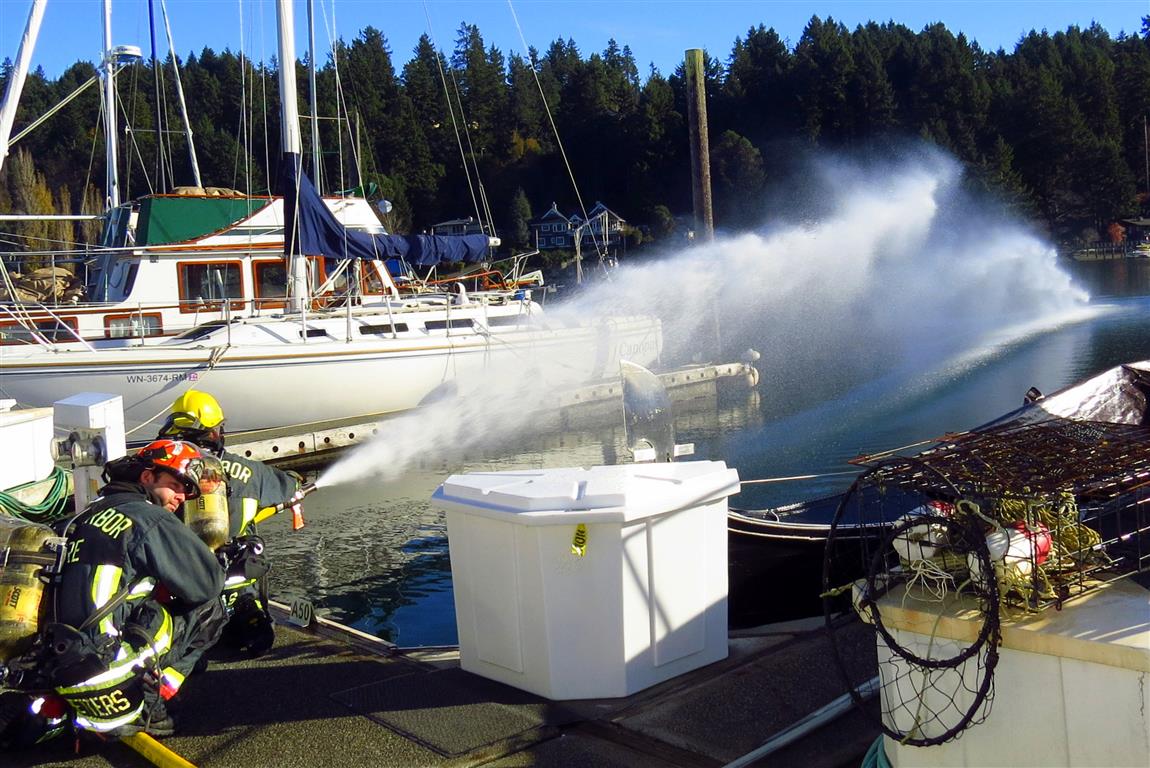 Before the training drill, Lt. Marcin Szczepanski with Gig Harbor Fire placed an orange cone far down the dock to simulate the location of a boat on fire. “Marina fires are particularly bad because it’s all flammable material,” he said. 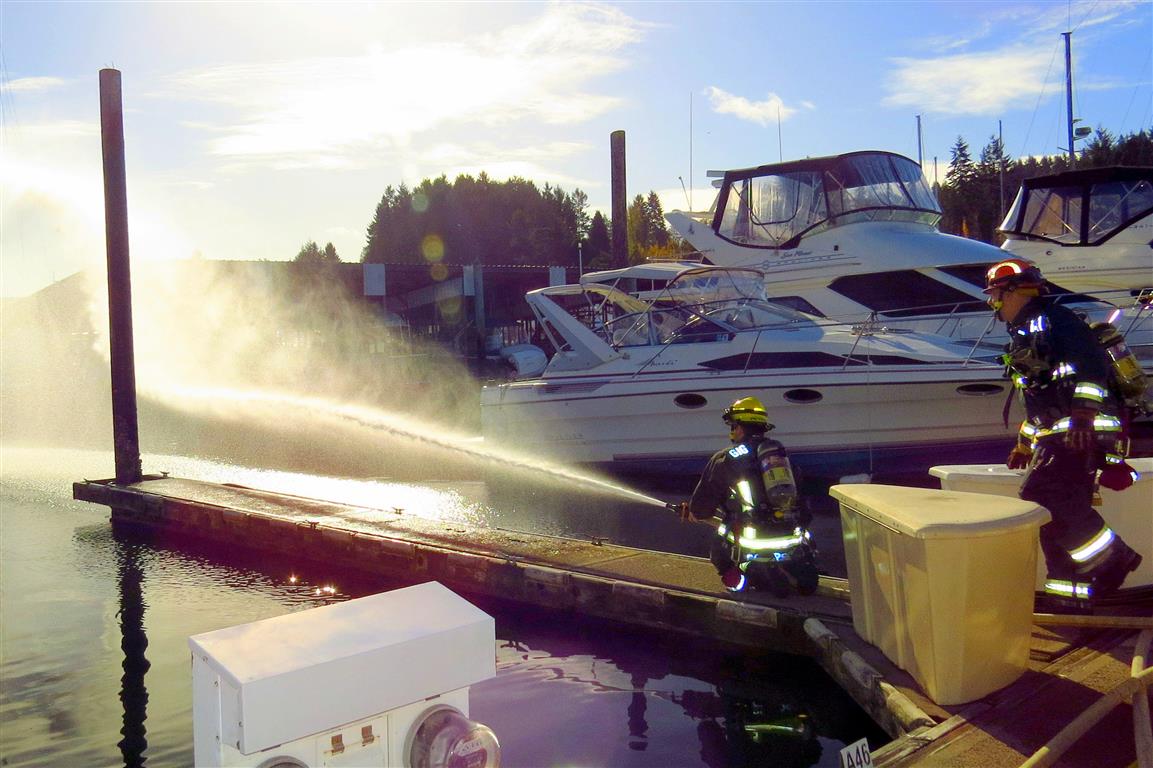 Firefighter Matt Stevens explained the drill before the crew arrived. “We are simulating that there’s a boat on fire, we’ll get a line on it and protect the boats around it. We’ll be getting our lines charged and hit the boat fire. Usually the best thing we can do is get the other boats out of the way.” 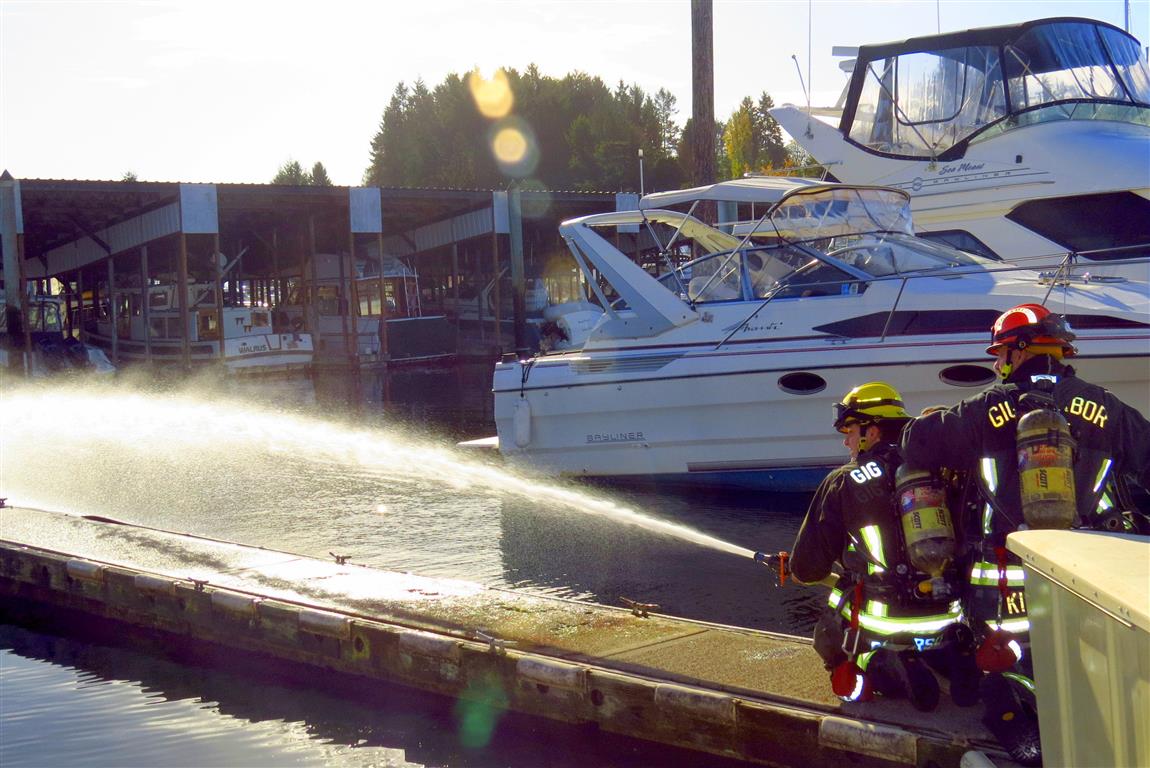 The fire drill was a collaborative effort between Gig Harbor Marina & Boatyard and Gig Harbor Fire and Medic One, said marina general manager Ron Roark. The idea was also planted at a recent Northwest Maritime Trade Association conference. “They spoke about why these drills are so important for staff and I took it to heart,” Roark said.

Firefighters and Roark were both pleased with the outcome of the fire drill. Water pressure allowed for rapid hose-charging among boat slips nearly at the far end of the dock and was just what they had hoped for. 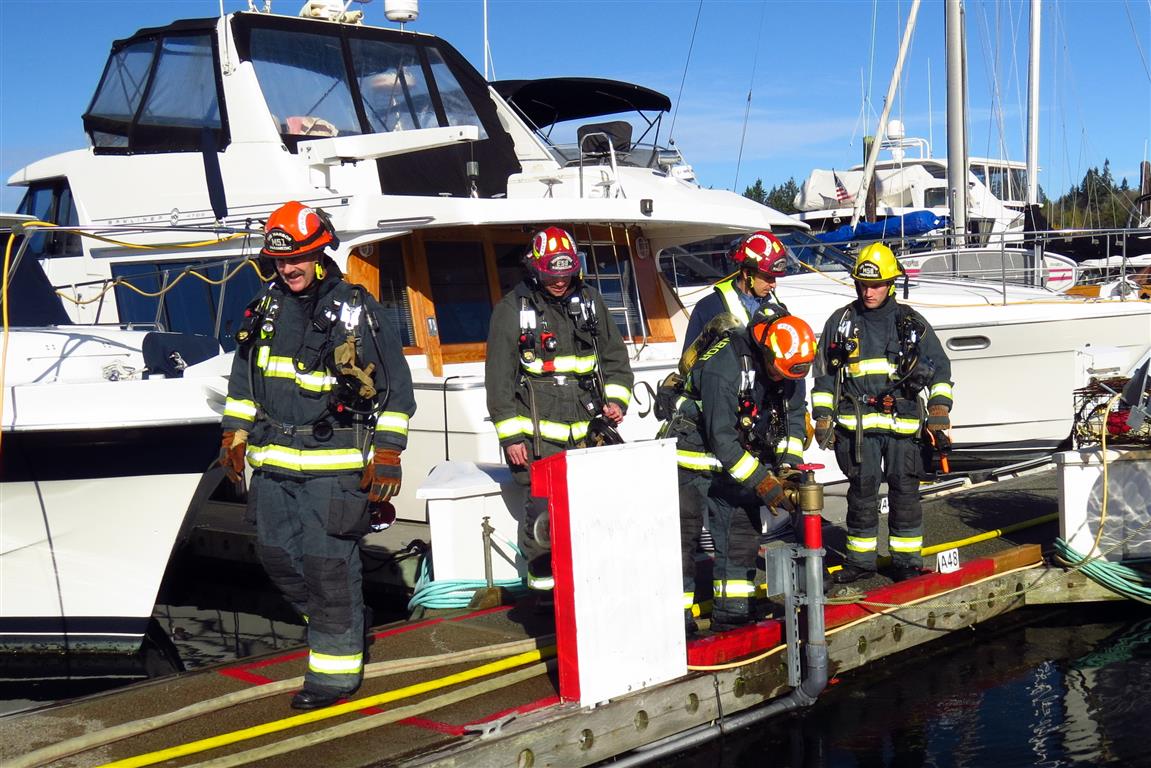 Nanette Tatom, prevention specialist with Gig Harbor Fire and Medic One, was grateful for the opportunity Gig Harbor Marina & Boatyard provided for the training.

“Thank you again for allowing Gig Harbor Fire & Medic One to use your marina today for training,” she told Roark. “It really helps the crews be better prepared in the event of an incident to have these types of opportunities for training. And we were so fortunate to have a nice day as well.” 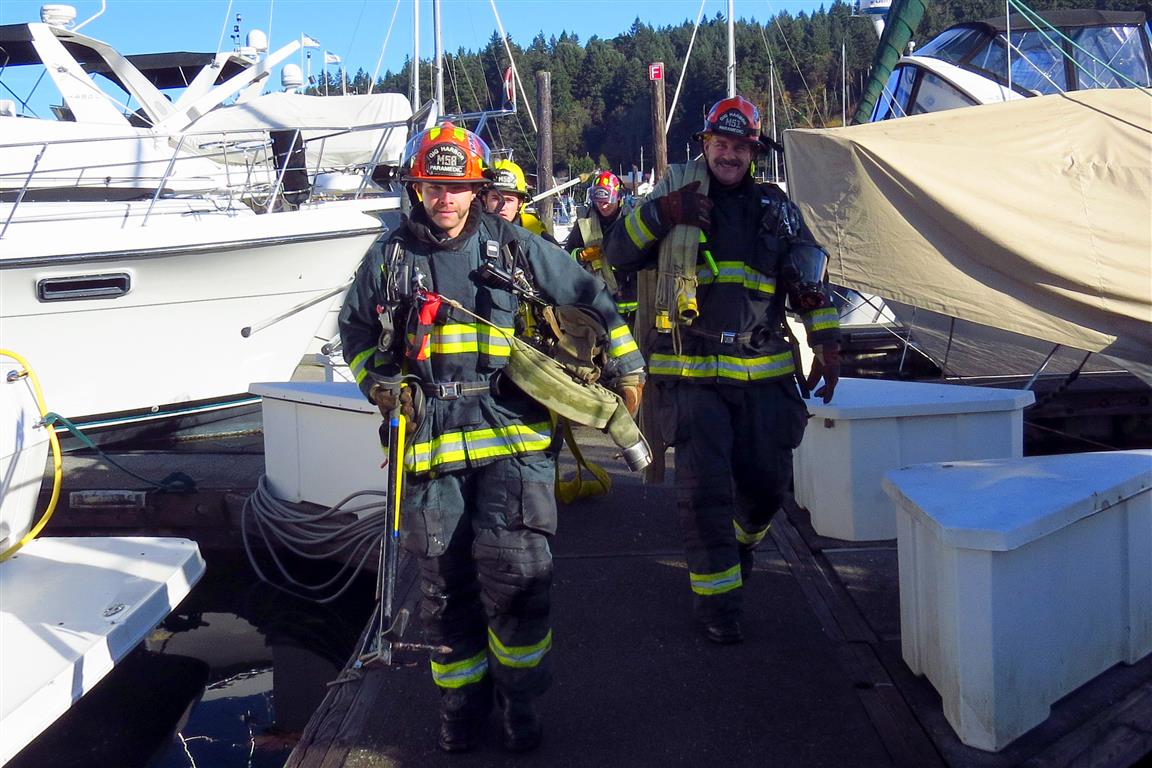 After the hoses and other gear were stowed back in the fire engine, firefighters walked across the boatyard to Skansie Brothers Park to attend the Veterans Day flag ceremony organized by Gig Harbor Boy Scout Troop 282.