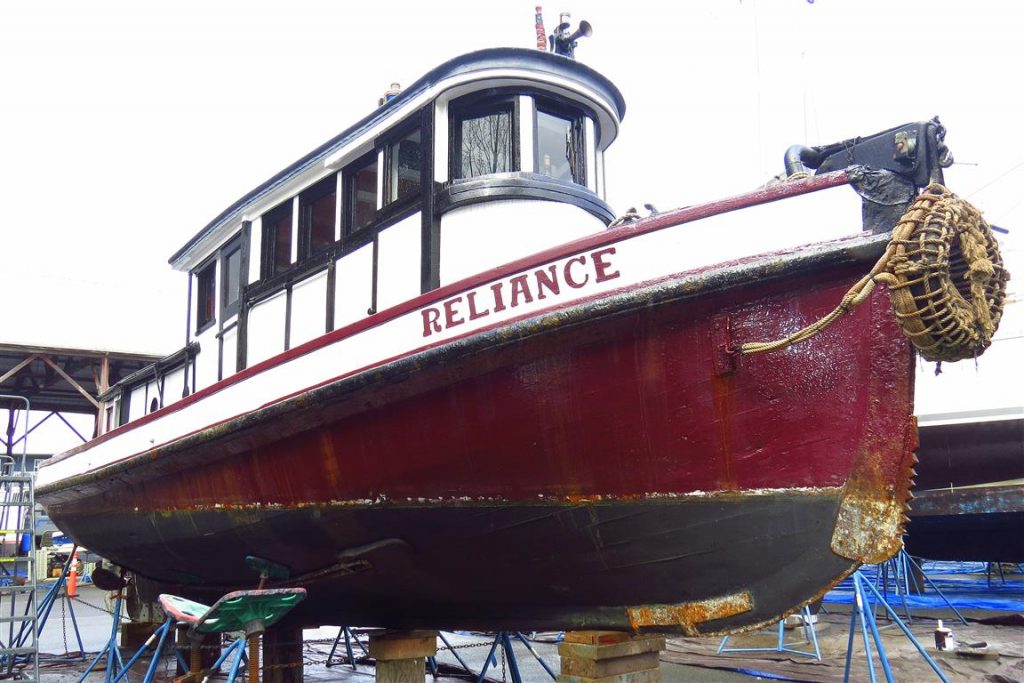 A piece of history made a port of call at Gig Harbor Marina & Boatyard last week. Reliance, an all-wood tugboat built in 1909 to work in Washington’s logging industry, was on the yard for bottom paint.
Sitting on the Gig Harbor boatyard between sleek modern marvels of fiberglass, electronics and floating luxury sat the noble 40-foot workhorse tug built 107 years ago by Joseph George of the Chinook Indian Tribe.  President William Howard Taft sat in the White House that year and Washington had been a state for just 20 years when George built the Douglas fir-planked boat in Bay Center, near Willapa Bay.

Timber was king in the new state and just two guys were building tugs like Reliance to work in the booming logging area around Bay Center, said her owner John Dierck of Vaughn.  During the 16-ton tugboat’s first 20 years she did “the same thing the Mosquito Fleet was doing in Puget Sound:  supplying the logging industry and moving people around,” said Dierck. Then Reliance moved on to log patrol in the Grays Harbor area. 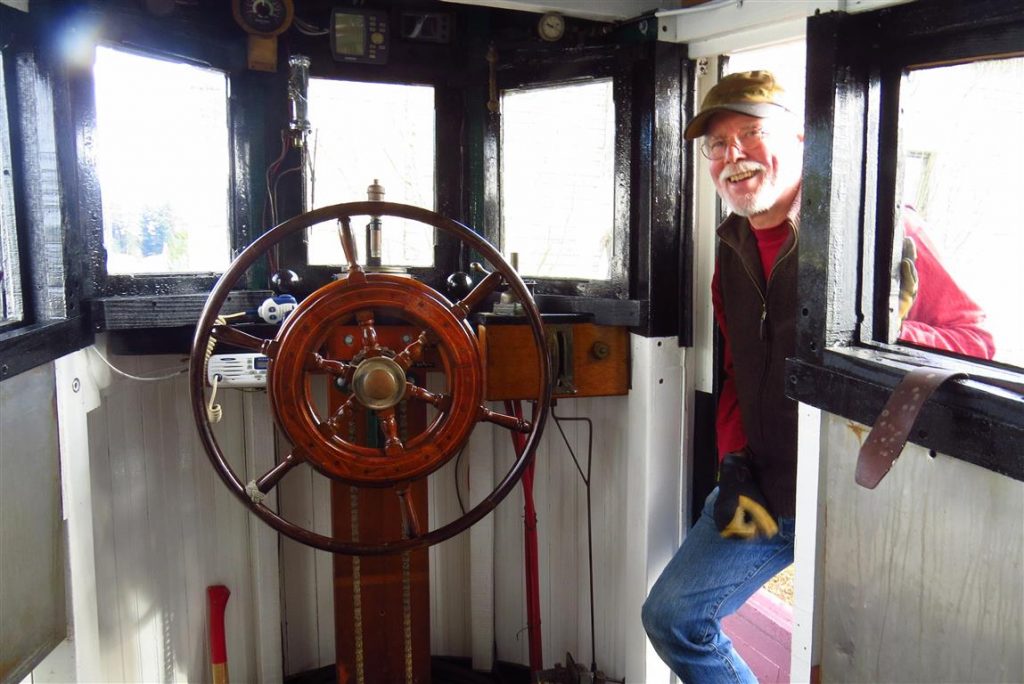 Reliance owner John Dierck stands in the cabin he built in his garage and then reassembled and installed on the tug. He worked on painting projects while the 1909 tugboat was at Gig Harbor Marina & Boatyard.
“She was one of the first 18 boats in the log patrol, working in Aberdeen and Hoquiam,” said Dierck. “The rest were in Puget Sound.” That was a powerful position for captains, who even had the authority to arrest people, added Dierck.

Reliance worked in the log patrol from the 1930’s to 1978, when her then-owner rebuilt some of her two-and-a-half inch thick fir planks — some of them 30 feet long — and entered her in Olympia’s annual Harbor Days tugboat races for the first time, and won.
“As far as I know, it’s won eight times,” said Dierck, who himself skippered the 671 Detroit diesel tug to a win by a few seconds in 2014.
Dierck, who worked at the Bremerton Naval Shipyard, bought the historic Reliance in 2007. “That’s the year I retired, so that was my retirement project,” he said, as he worked on her cabin one evening at Gig Harbor Marina & Boatyard. But that wasn’t the first time he’d seen the tug, whose name has always been Reliance in its 100-plus year history. 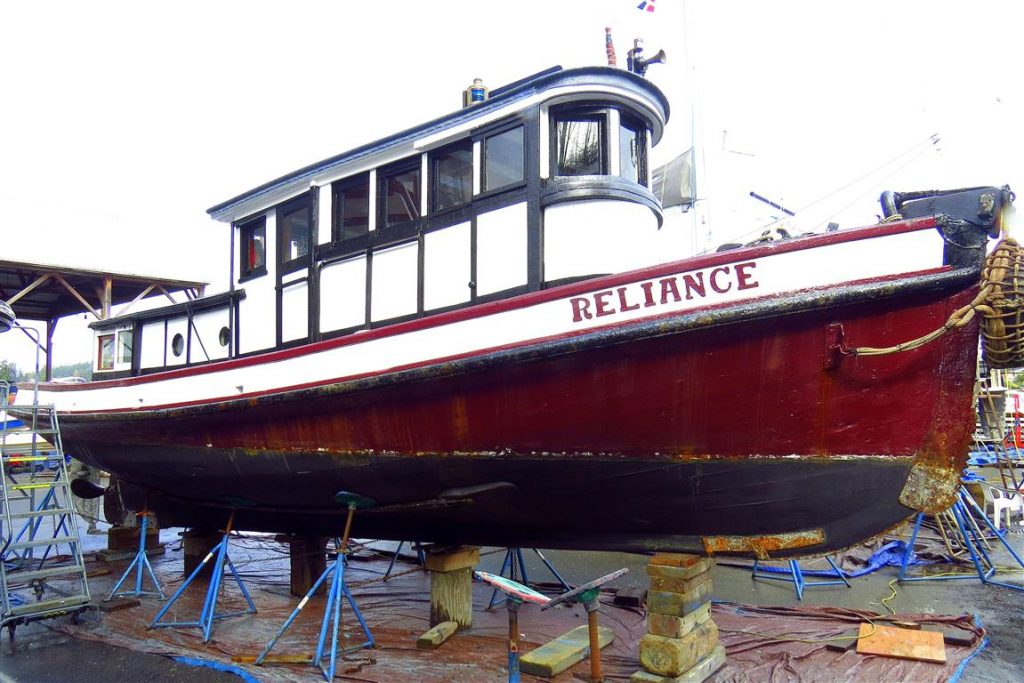 The all-wood 40-foot tugboat is made of two and a half inch thick Douglas fir planks, some of them 30 feet long.
“I have always loved tugboats and I remember seeing this boat when I was a kid,” he said. “It was docked in Aberdeen.” Through the years, the boat ended up in La Conner, where Dierck’s son noticed it and let his dad know “that tug you like is on the market.” It’s been a fulfilling retirement project ever since.
“I felt lucky that it was in such great shape,” said Dierck, who is lovingly restoring the 107-year-old boat — by hand when he can, “because that’s how they did it.”

Dierck has rebuilt the front of the cabin, which was torn off by a cable many years ago. He built the cabin in his garage, then took it apart and put it back together again on the tug — “and it fit,” he said proudly. He was able to use the same windows by moving them forward. For a period touch in the cabin, Dierck cut down a large fir tree in his yard, dried the wood and crafted timber beams for the cabin ceiling. He also custom-built Adirondack-type seats and installed comfortable foot rests on the seats. 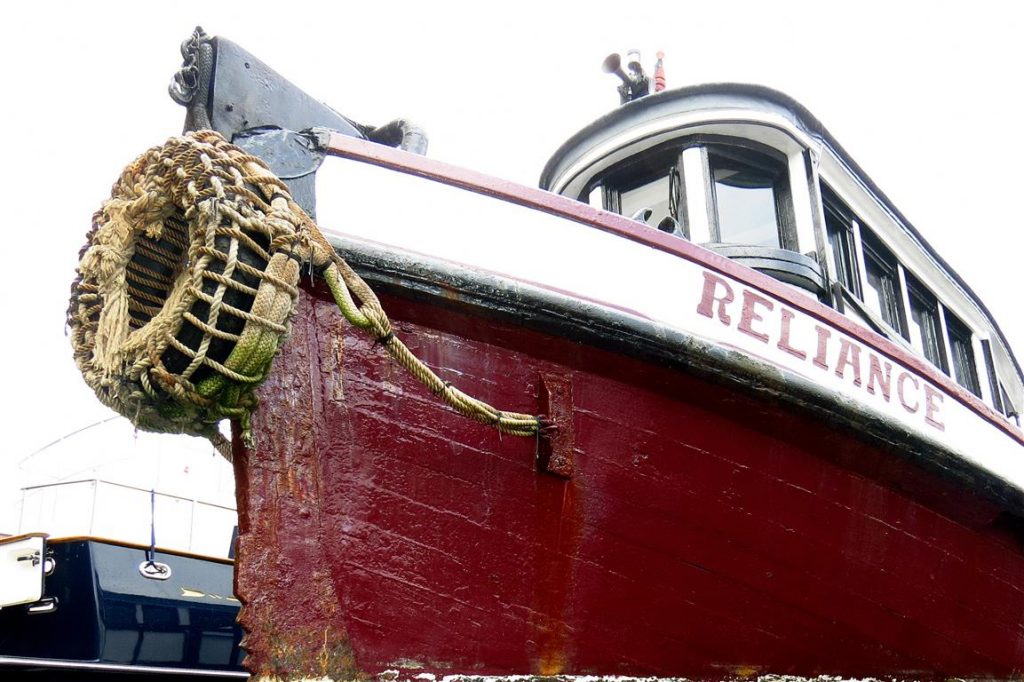 Dierck learned how to do nautical grafting to weave this rope cover for Reliance’s bow fender. Behind the tire fender is a tow bridle.
“I’m hoping by the time I’m finished (with restoration projects) I can just drive it,” chuckled Dierck, although the skipper has enjoyed many excursions in the old tugboat since he bought it.  He and his wife and aging chocolate Lab Elsie take fair-weather day trips in the South Sound, making it their mission to visit every dock where the historic Mosquito Fleet stopped.
The Puget Sound Mosquito Fleet consisted of private transportation companies that ran smaller passenger and freight boats on Puget Sound and nearby waterways and rivers. At the peak of the fleet’s activity, between the first and second World Wars, this large group of steamers and stern-wheelers stopped at every waterfront dock.

Dierck hopes to get back to those historic retracings this summer after his stopover at Gig Harbor Marina & Boatyard and a few more of his own projects. The crew at the Gig Harbor boatyard worked on Reliance below the waterline during the day, and Dierck visited her in the evenings to work on projects above the waterline. He painted the cabin and gave the window trim a fresh coat of striking black paint, among many other tasks required as caretaker of a piece of history. 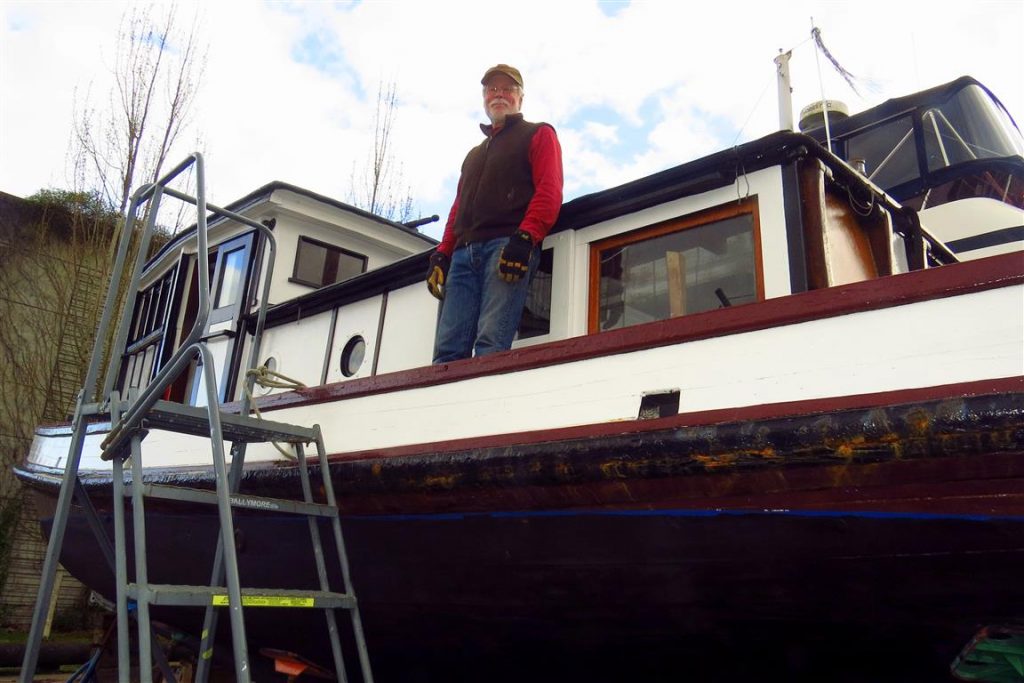 Reliance owner John Dierck bought the 1909 tugboat as his “retirement plan” in 2007. He and his wife have since retraced many dock stops made in the South Sound by the Mosquito Fleet between the First and Second World Wars.
“I do feel like that,” he said, “and I have embraced the responsibility of it. It doesn’t leak and it’s kept in a covered slip.” In fact, driving it to Gig Harbor Marina & Boatyard for bottom paint last week was the first time he’d ever driven the tug in the rain.
When Dierck bought Reliance, which is the oldest boat with that name in the United States, there were 10 boats in the state of Washington 100 years old or older. Now there are eight, and Reliance is the only tugboat of its age and design still around, he said.
“It will stay in the family,” says Dierck. “It was my retirement plan and my son said he would take it over when I’m finished.”

Read more about Reliance and other venerable old vessels at Retired Tugboat Association.