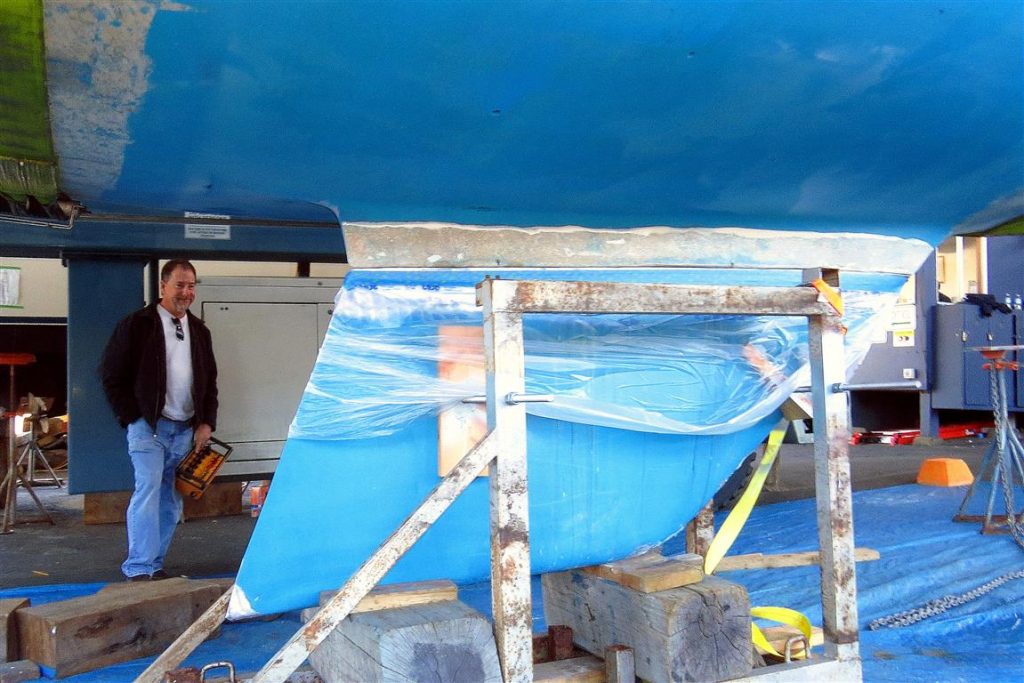 It was a performance of precision and perfection and I cheered when it was finished.

Mark Rybin (in photos above and below), master operator of the Marine Travelift at Gig Harbor Marina & Boatyard, slowly rolled the Catalina 34 forward in the 50 metric-ton lift, lining the sailboat up with its keel waiting in the cradle. Then he switched vehicles, climbing into the forklift, and began pushing the cradle forward, scooting the 5,000-pound lead keel under the sailboat. The boatyard crew eye-balled the alignment and signaled to Rybin to stop. Then the veteran operator went back to the Travelift control box and carefully lowered the Catalina, neatly shimmying her down onto the keel bolts. Perfectly. Precisely. On the first attempt. 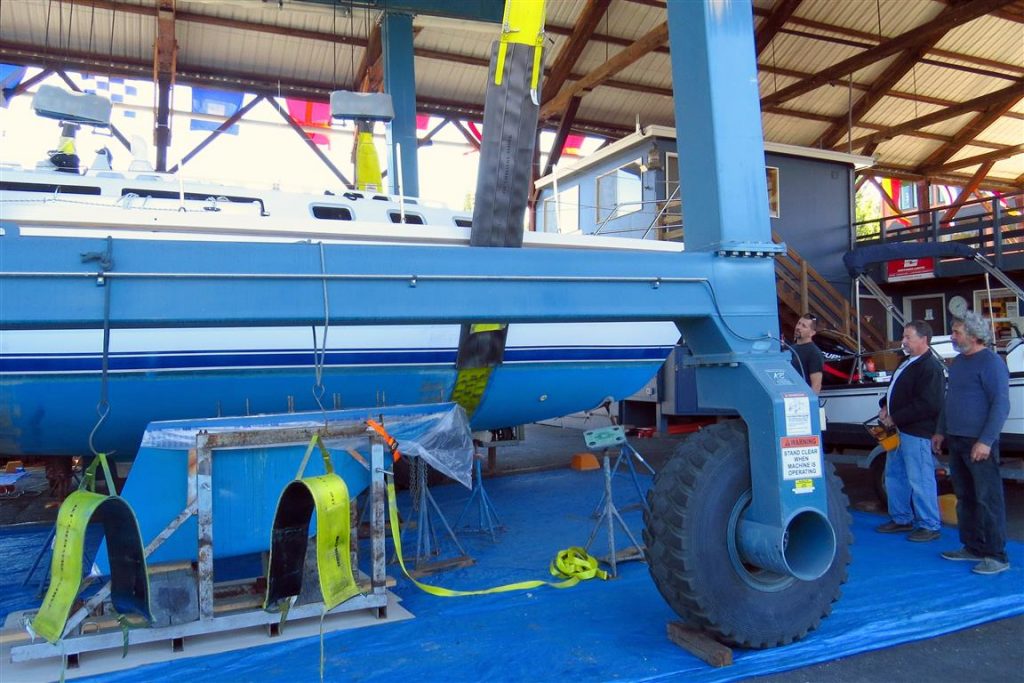 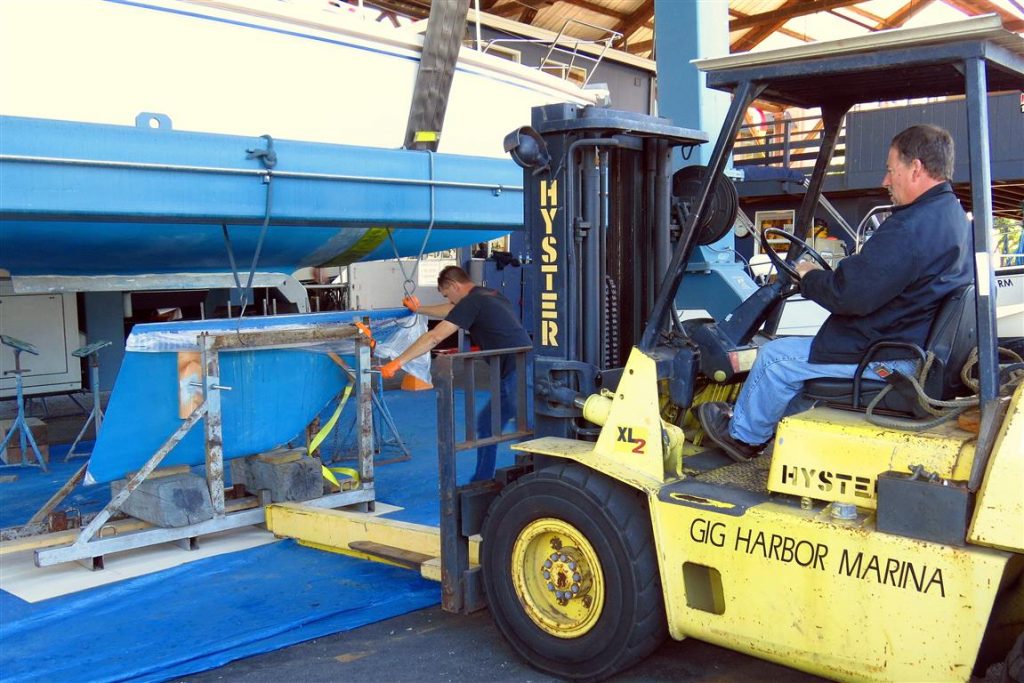 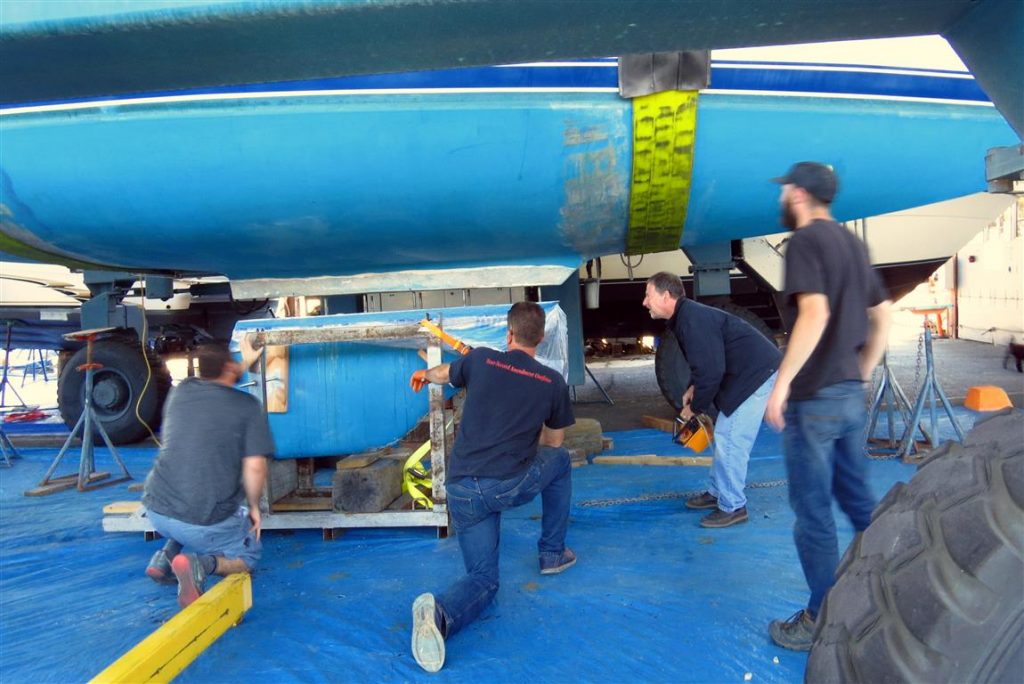 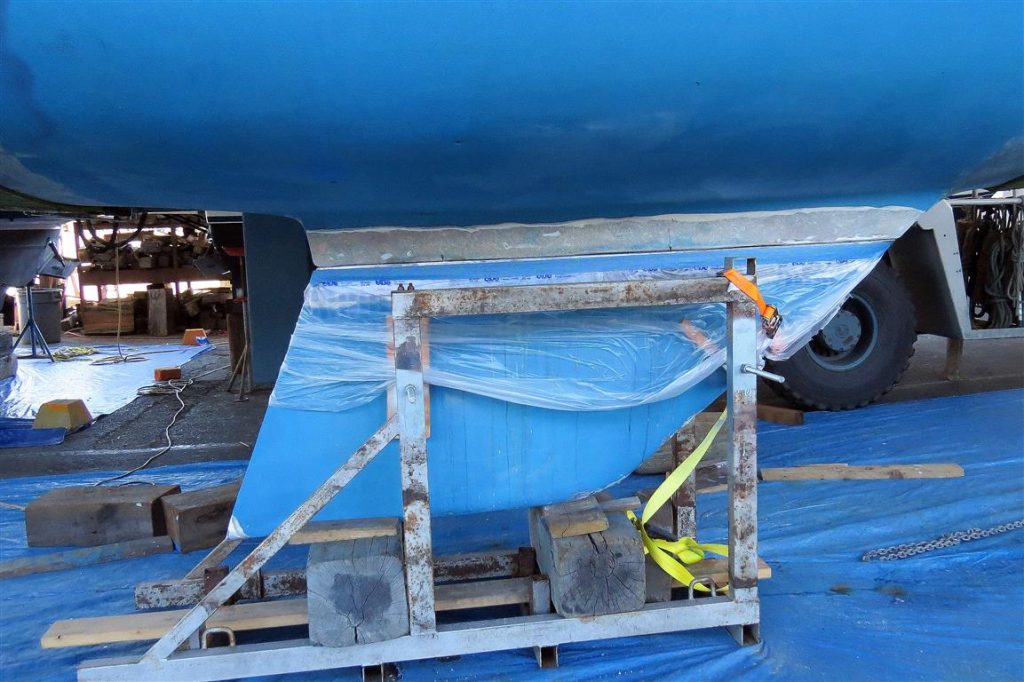 Who does that? The crew at Gig Harbor Marina & Boatyard definitely does — and apparently, routinely, because I was the only one who gave a cheer when the sailboat settled down onto the bolts, reunited with its two-and-a-half tons of lead. The guys just quietly went about the next business at hand: setting up stands under the boat, backing the forklift away, and mixing epoxy to slather on the keel and keel stub.

The Catalina 34, Peacemaker, came to the boatyard for collision repair after a rock strike while entering Sucia Island in the San Juans this past summer. Unfortunately, it’s an occurrence that is bound to happen to all boaters, said boatyard manager Mark Lindeman.

It’s Bound to Happen to All Boaters…. 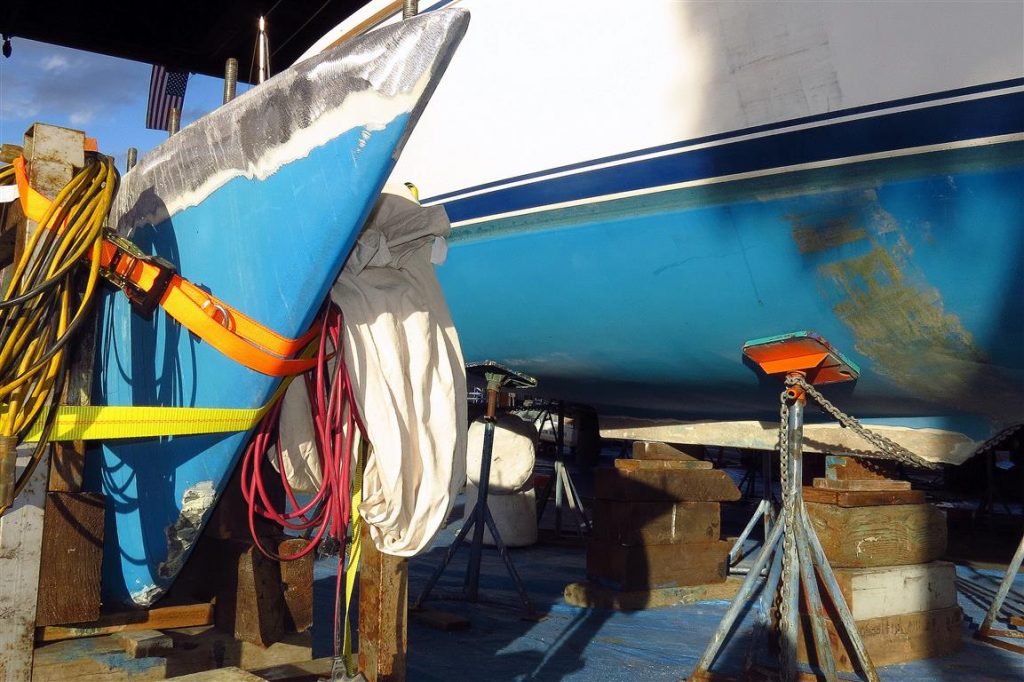 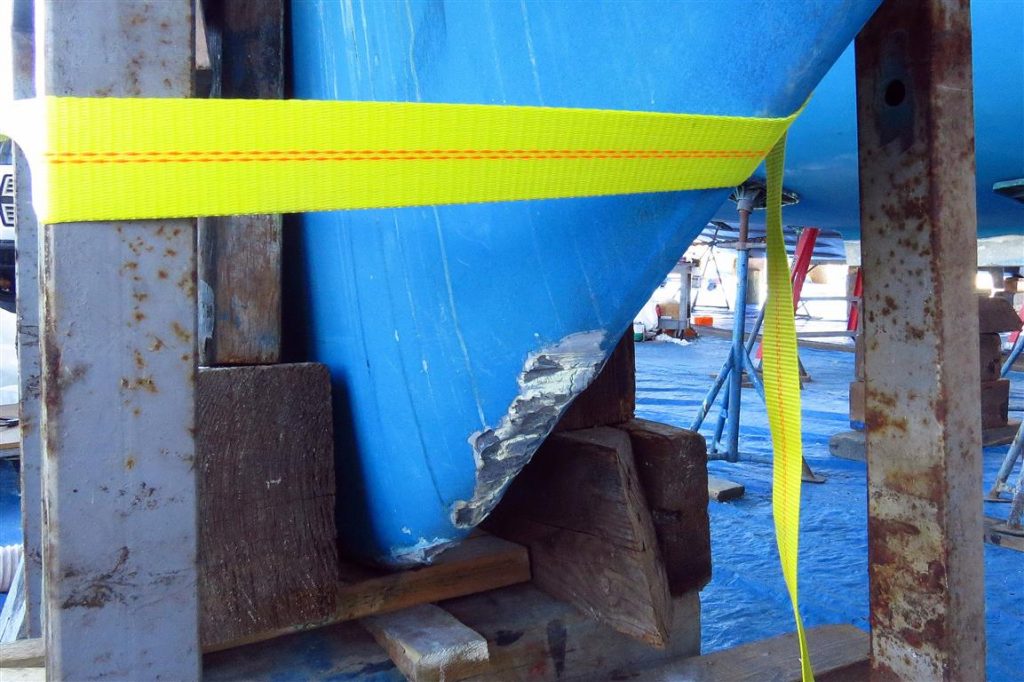 No matter, Gig Harbor Marina & Boatyard fixes up every kind of boater and boat.

In the case of Peacemaker, the boatyard crew started with removing the boat’s sails and mast in preparation for detaching the damaged keel. Shipwright John Iverson was the lead on the project and through his expertise, the crew separated the keel from the boat, said Lindeman.

First, Travelift operator Rybin lifted the Catalina and set her down in the keel cradle. Next, shipwrights removed the keel bolt nuts and then Rybin lifted Peacemaker off the cradle, which was plenty sturdy to handle the two-and-a-half ton lead keel left in the cradle. Finally, the crew cleaned the old sealant off the surfaces of the keel stub and the keel, and the repair work got under way.

Click here to see video of Peacemaker being lifted off of her keel: Keel Removal Video

Repairs were needed on the interior and exterior of the keel stub and inside the hull, said Lindeman.

“The impact of the rock strike pulled the forward keel bolt into the laminate, fracturing the bottom of the boat,” the boatyard manager explained.

In addition, there was delamination of the bilge frames when bonds between the frame and hull broke from the impact, he continued.

“This is very typical (with collisions),” said Lindeman. “The whole bottom of the boat flexes. It’s a relatively easy repair. It’s just accessing the area that’s hard, although there’s a pretty nice bilge space on a Cat 34.”

Carl Conner, expert fiberglass laminator at Gig Harbor Marina & Boatyard, got to work grinding out the delamination from the inside frames in preparation for reglassing the bulkheads. 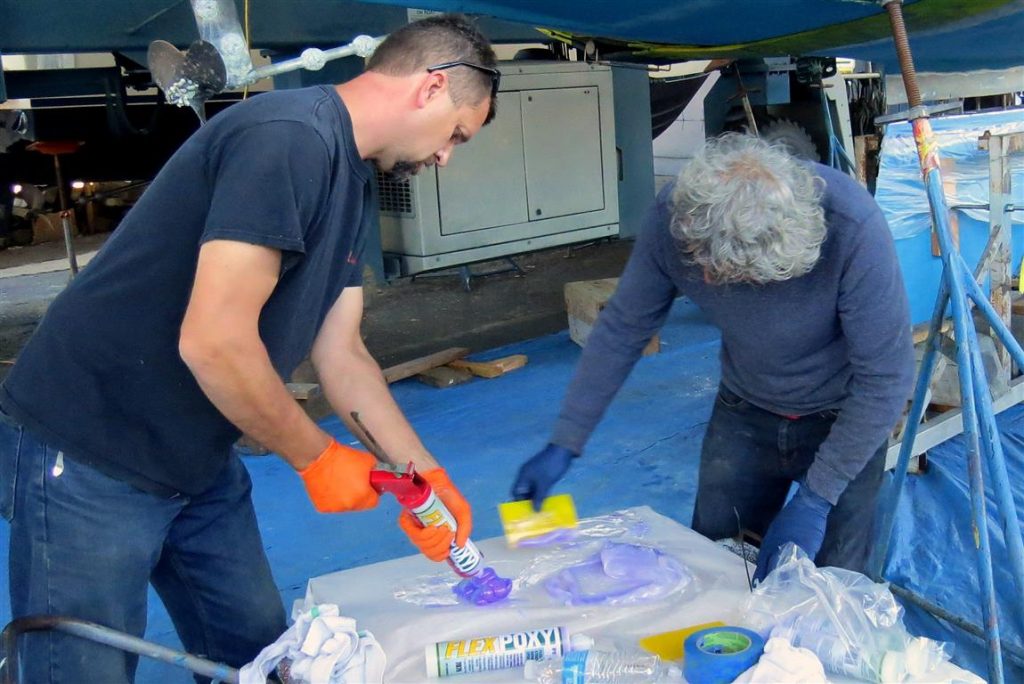 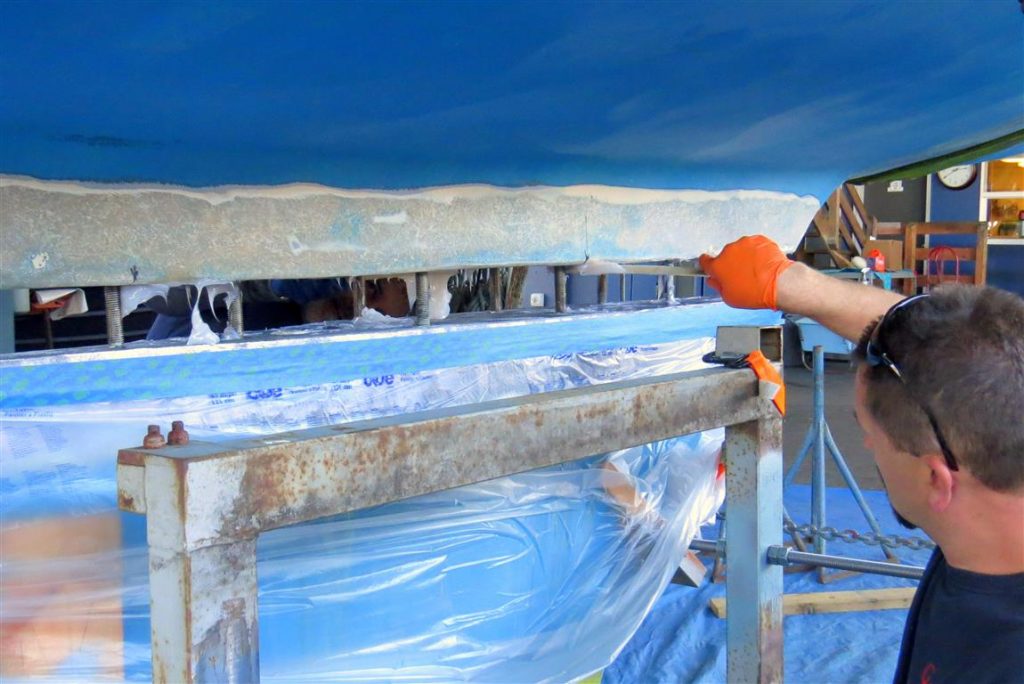 Every time I was at the boatyard I snapped photos of the progress on Peacemaker. And then the day came when it was time to reset the 5,000-pound keel. For the experienced boatyard crew, it was just another day at the office.

“You just glue it and screw it, that’s all there is to it,” quipped Iverson.

Well, of course, there’s a lot more to it. Iverson (left, in photo above) and Conner (on right, with Iverson) quickly mixed epoxy sealant and spread it on the raw surfaces of the keel stub and keel. 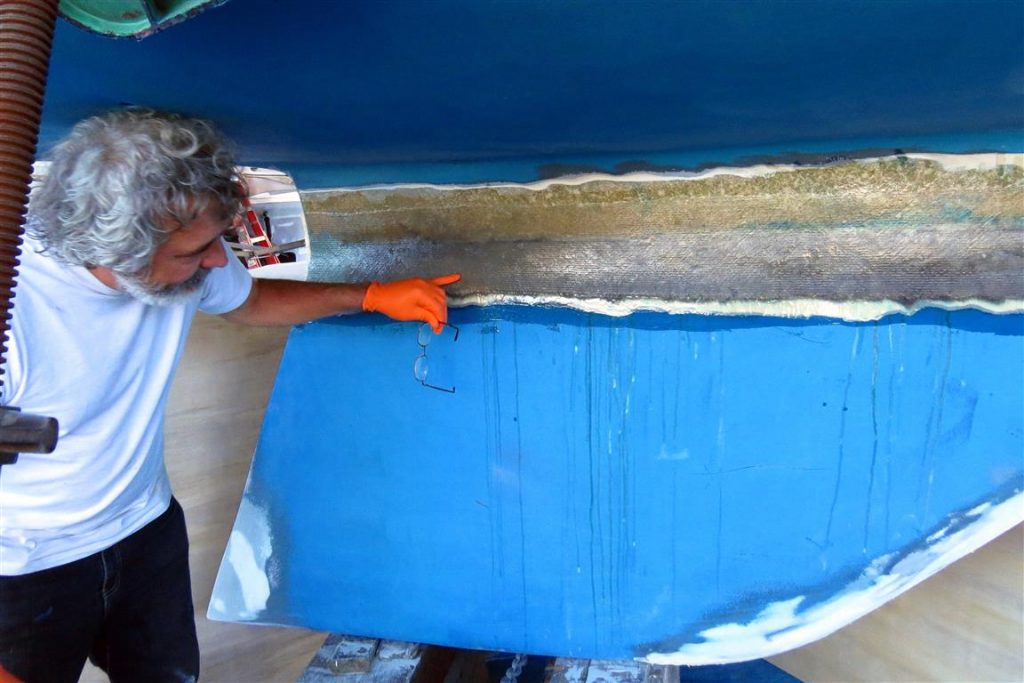 After Peacemaker’s keel was sealed, reset and bolted back onto the keel stub, Conner started the process of reglassing and filling the seam. Conner is seen above, checking on his fiberglass application while it dries. 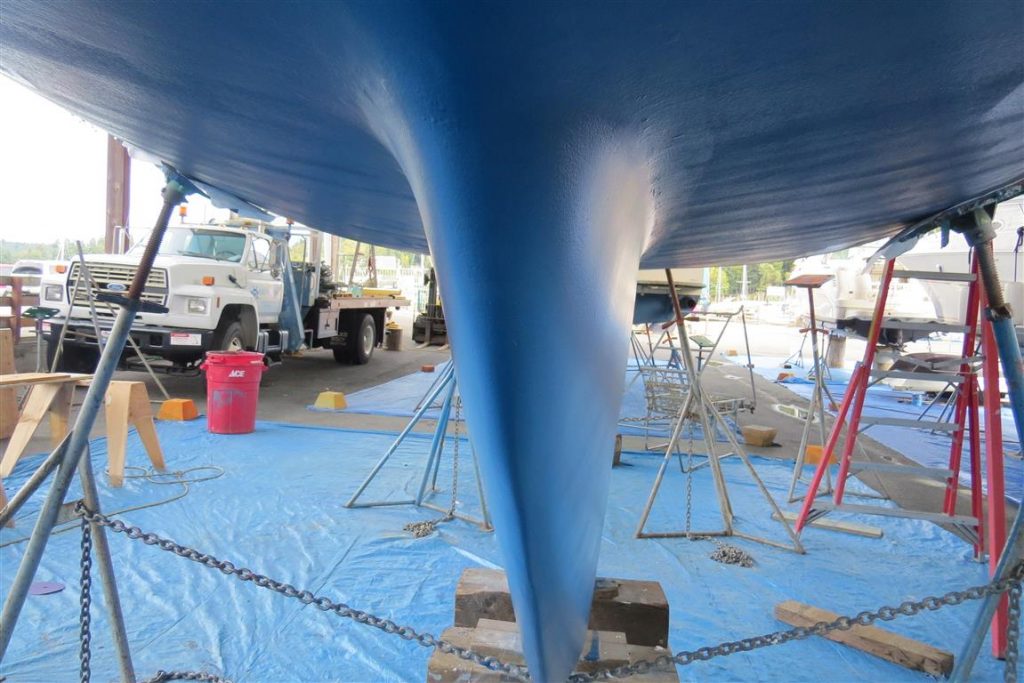 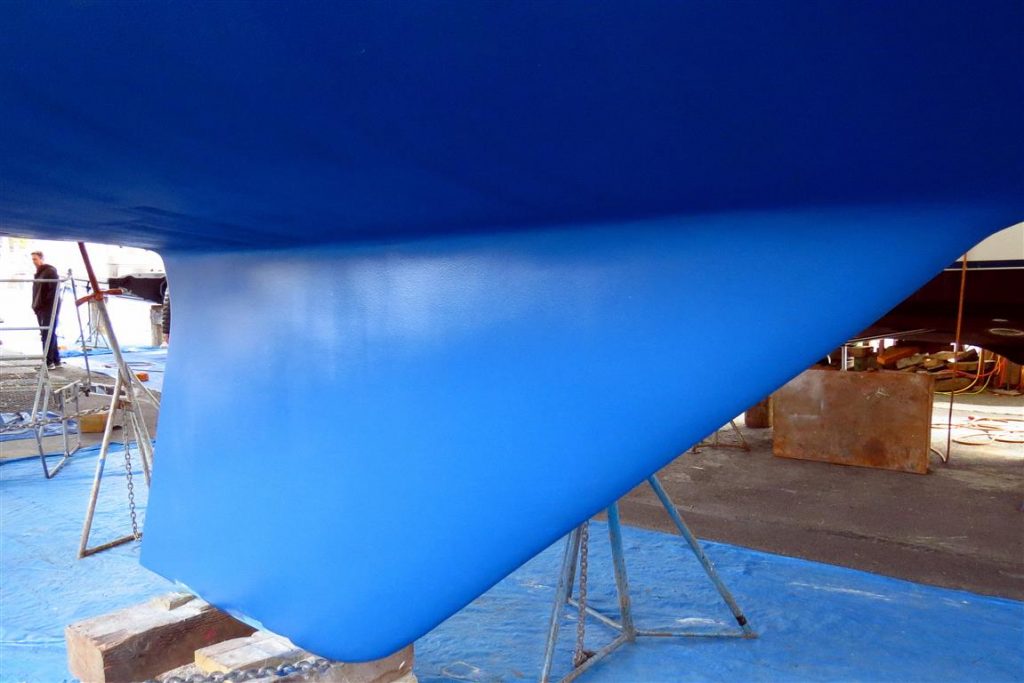 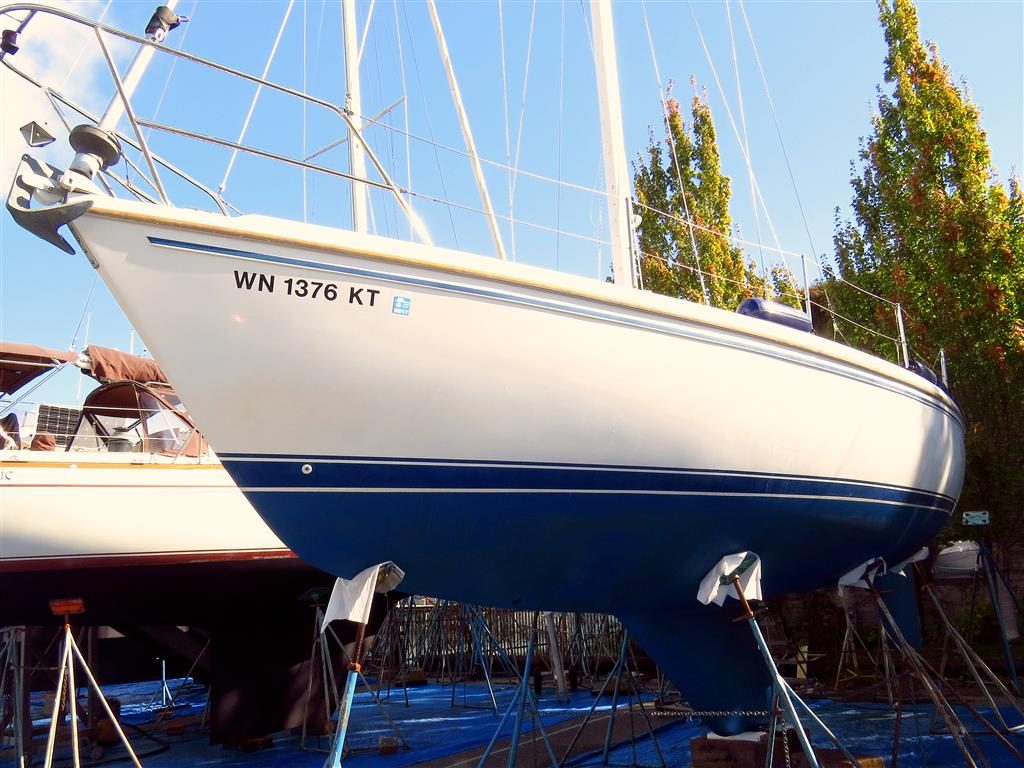 Hitting a rock may be every boater’s nightmare, but a visit to Gig Harbor Marina & Boatyard will make that bad dream disappear. After having her keel removed, repaired and reset, Peacemaker is ready to be a memory-maker for good times on the water.