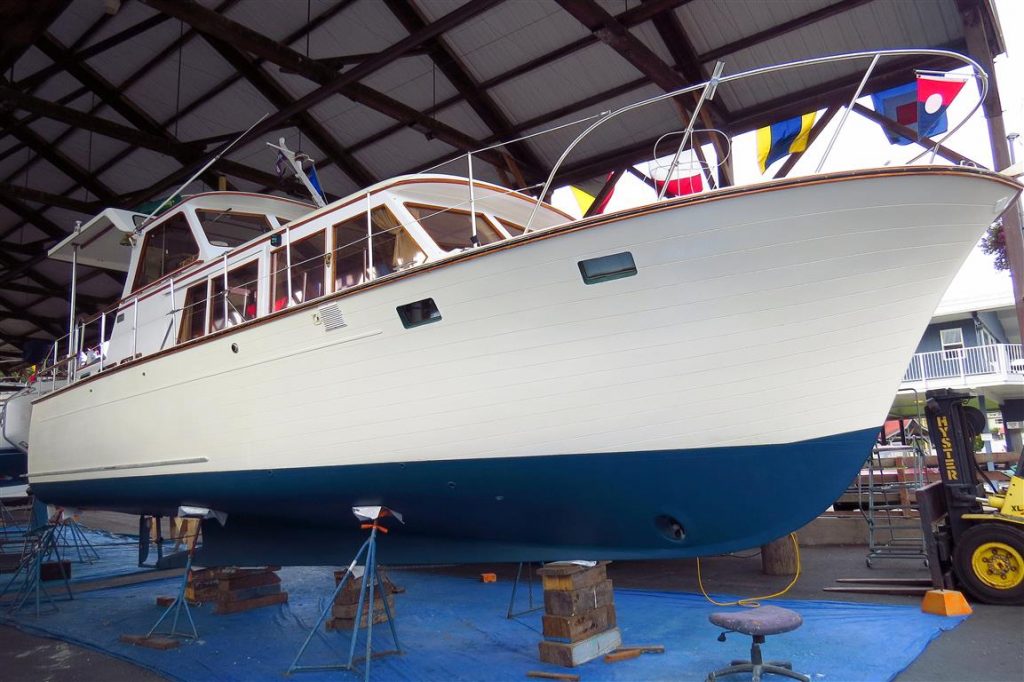 Long-time customer Jim Roberts brought his Roughwater trawler in to Gig Harbor Marina & Boatyard last week for a needed shaft tube repair. Sea Estate developed a leak in her shaft tube and the boatyard crew, who knows her well, will have things smoothed out with the Roughwater 41 in no time.

Roberts has been bringing his 1979 Roughwater pilothouse trawler to Gig Harbor Marina & Boatyard for regular service and repair ever since he bought her in 1994. Before that, the Gig Harbor boatyard crew took care of his Bayliner 34.

Roberts, of Tacoma, wouldn’t have it any other way.

“They are the only boatyard that has done work on our boat since we have owned her,” said Roberts, who is retired from a career in auto sales. “It is nice to see that many of the same people who have worked on her before are still there.”

This time the guys are fixing Sea Estate’s shaft tube and giving the Roughwater 41 a new shaft and prop, said Chris Hawke, service manager at the downtown Gig Harbor boatyard and marina. 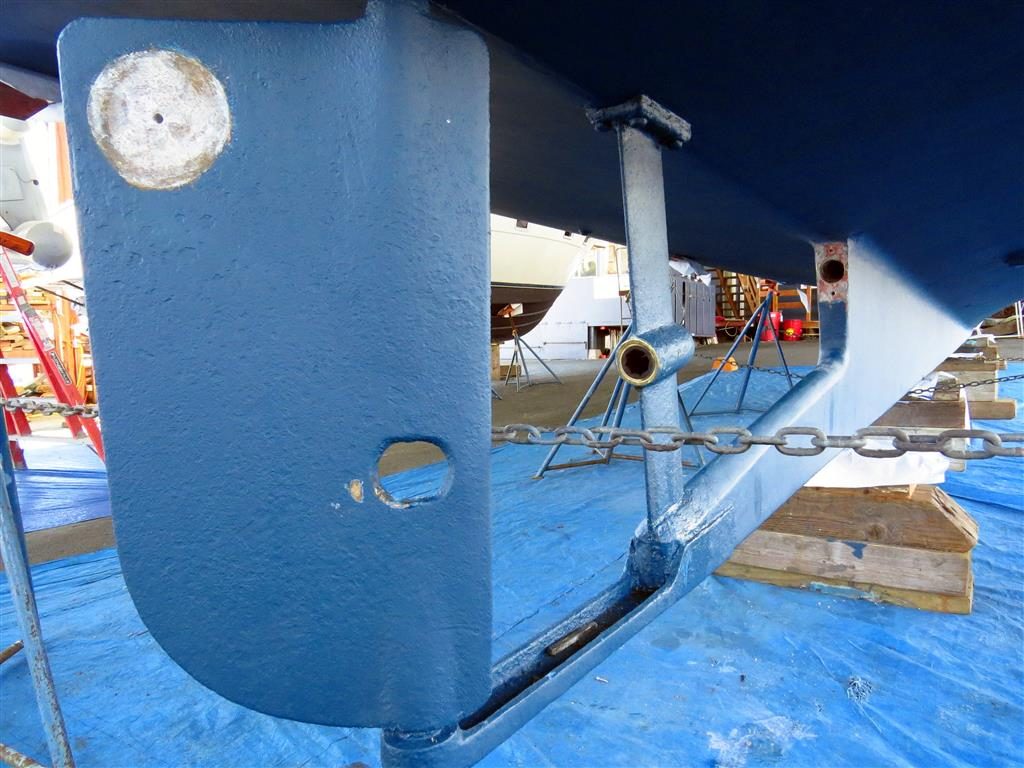 “Sea Estate” is having a shaft tube leak repaired at Gig Harbor Marina & Boatyard. The Roughwater 41 is also getting a new shaft, prop and front motor mounts.

“She had a leak in her shaft tube,” he said last week, not long after the trawler arrived at the yard. “We’ve located the leak and have taken out the shaft log and will fiberglass a new tube, eliminating the stainless tube that had the leak.”

The repair and new shaft and prop are due for the 37-year-old trawler, which has covered a lot of salt water over the years, from the South Sound to Alaska, says Roberts, a member of the Day Island Yacht Club.

“Both the prop and shaft are original from 1979,” he said, “and both are showing signs of wear and corrosion from salt water and age.”

The boatyard crew will also replace Sea Estate’s two front motor mounts and move the stuffing box toward the stern so it can be accessed more easily for future adjustments, added the owner.

Sea Estate A Regular Customer at Gig Harbor Marina & Boatyard since 1994.  “It’s nice to see that many of the same people who have worked on her before are still here.” – Roughwater owner Jim Roberts

Since he bought his boat 22 years ago, Jim Roberts has become an “unofficial historian” of the Ed Monk-designed Roughwaters, says an online publication, PassageMaker, devoted to the family of trawlers,

Roberts is more modest about his credentials, but his thorough knowledge of the boat is evident on the website he started on the Roughwater in 1997, a few years after buying his 41.

Roberts and his wife bought Sea Estate in the early 90’s when their two daughters were very young. Simple and safe guided their choice of a Roughwater, he said.

“We bought her for safety reasons, fuel economy and the two sleeping cabins,” said Roberts. “41 Roughwaters are simple, very sea worthy, and have more living and storage space available than any other popular boat I have been aboard.”

Roberts’ daughters had the V-berth forward and “Mom and Dad got the aft cabin” during summer cruises that took the family to Princess Louisa Inlet, Desolation Sound, the Gulf Islands, the San Juans and all over north and south Puget Sound, he said.

“Our girls spent over a third of every summer until they were 15 on Sea Estate, traveling Salish waters,” said Roberts. 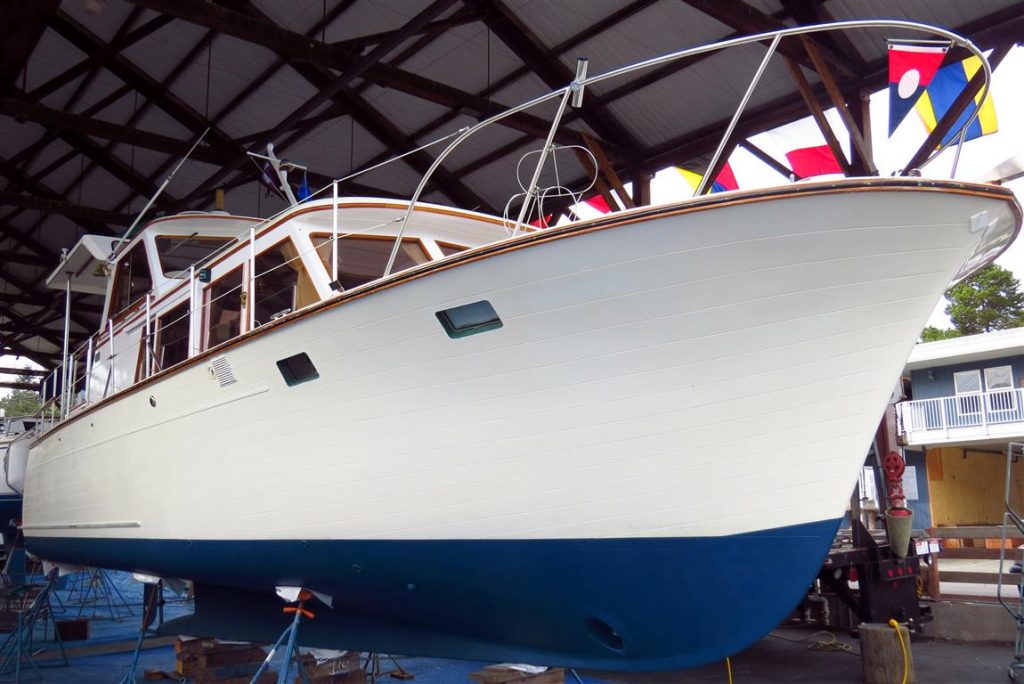 The steady, sturdy pilothouse trawler will soon be ready for her next cruise after her shaft tube leak repair. She has been a regular customer for service and maintenance at Gig Harbor Marina & Boatyard since 1994.

The 41 Roughwater is a traditional-looking pilothouse trawler that is a comfortable cruiser, attest the websites. It offers all the amenities of larger boats in an easy to handle, responsive, single engine trawler. Sea Estate has a fiberglass hull, cabin top and pilothouse top, says Roberts.

“Her cabin sides are wood with paint over a glass coating,” he continued. “Ed Monk, the marine architect who designed most of the Roughwater boats, did this to lighten the weight up high so she would not roll as much. They are lighter than most of the trawlers from the same era, so better fuel economy, and the visibility from the cabin and pilothouse are fantastic. Our pilothouse has a 360-degree view.”

It Will Soon Be Smooth Sailing Again for this Roughwater 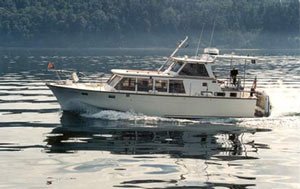 Sea Estate’s previous owner took her up to Alaska, and her current owners have cruised in the comfortable Roughwater all over the Gulf Islands, the San Juans and throughout Puget Sound.

Soon it will be smoother sailing for this Roughwater after her shaft tube repair, new prop and shaft, and fresh application of bottom paint.

“(Gig Harbor Marina & Boatyard) takes care of our boat,” said Roberts. “They communicate any problems in an easy to understand manner. Chris (Hawke, boatyard manager) has kept me informed of the progress and findings through phone, texts with pictures and email.

“We will continue to come back.”