Boaters, a new service has arrived in the harbor that is going to make life aboard that much easier: a waste pumpout service that comes to you — and it’s free.

It’s a 75/25 arrangement involving funding from a state-administered grant that covers 75 percent of costs for the service on the condition that local communities contribute the remaining 25 percent.

On behalf of private marinas in town, Ron Roark, general manager of Gig Harbor Marina & Boatyard, approached the City of Gig Harbor, which has agreed to cover half of the 25 percent. Roark is soliciting all marinas and slip owners in the harbor to cover the other 12.5 percent for this environmentally-conscious service.

“What a benefit this is for the harbor and the community,” said Roark, pointing out the importance of clean and green practices in our marine environment. 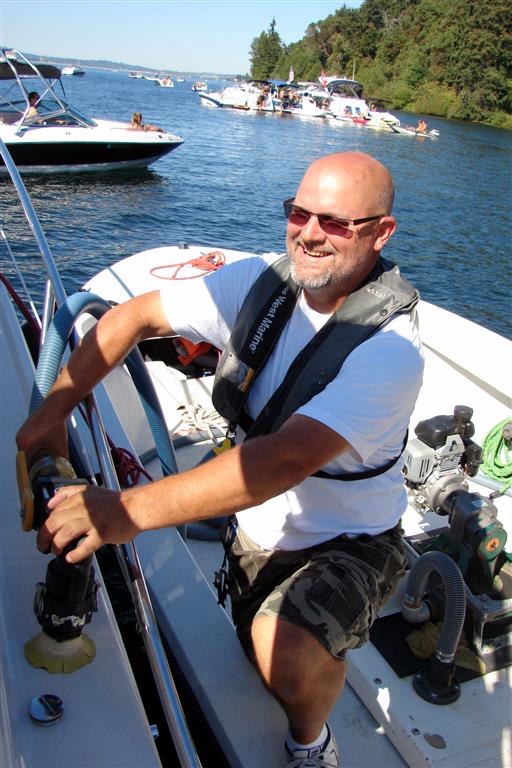 Terry Durfee of Terry & Sons does a boat-side pumpout at Seward Park in Seattle. (Photos on this page courtesy of Terry Durfee)

The program comes from the Clean Vessel Act, which the U.S. Congress passed in 1992 to help reduce pollution from vessel sewage discharges. The act established a federal pumpout grant program administered by the U.S. Fish & Wildlife Service and the Sport Fish Restoration Act, which authorizes funds for use by states.

The program is administered at the state level by the Washington State Department of Parks and Recreation, which funds 75 percent of operating costs for private pumpout companies, with local communities or marinas responsible for the remaining 25 percent.

The City of Gig Harbor will cover half of that 25 percent, or about $15,000, and Roark hopes to get other marina and boat owners in the community on board to cover the other 12.5 percent for this needed service.

Roark Calls Meeting to Get Others On Board for Funding

He is calling a meeting for local marina owners, slip owners and boaters to discuss a plan of action for raising the funds needed to keep the pumpout program afloat.

The meeting and presentation of the program is set for 11 a.m. Wednesday, Aug. 23, at Gig Harbor Marina & Boatyard, upstairs in the Northwest Maritime Academy.

“This is a great service that will be free to all boaters in Gig Harbor and the surrounding area,” said Roark. “It will serve both transient and permanently moored boats.”

Terry & Sons, owned by Terry Durfee, is ready for service in the harbor. Terry, or “The Pumpout Guy,” as he is known, keeps his 21-foot Alcar pumpout boat at Gig Harbor Marina & Boatyard for easy access to any boat in the harbor or surrounding area.

His custom, or purpose-built boat, comes with a 100-foot hose, numerous fenders for protection when coming alongside, and a 300-gallon holding tank, hidden from view for a more pleasing appearance in marinas and the harbor.

The Pumpout Guy started his business as a hobby in 2008 when, as a live-aboard, he grew weary of long treks involving going through bridges for pumpouts every few weeks.

Durfee ran his “hobby” pumpout service on nights and weekends while working his day job as a civil engineer with the City of Seattle. Then, in 2013, the state asked Terry to run his part-time project as a business under the grant from Parks & Recreation.

Today a former engineer with the City of Seattle, Durfee now operates four pumpout boats as Terry & Sons, the others being in Poulsbo, Liberty Bay and on Lake Washington.

It’s Easy to Schedule Service with The Pumpout Guy

“The state asked me to run this as a business in 2013,” he said. “It started as a pilot program for one year, then nine months in they gave me a five-year extension. It’s really been successful.” 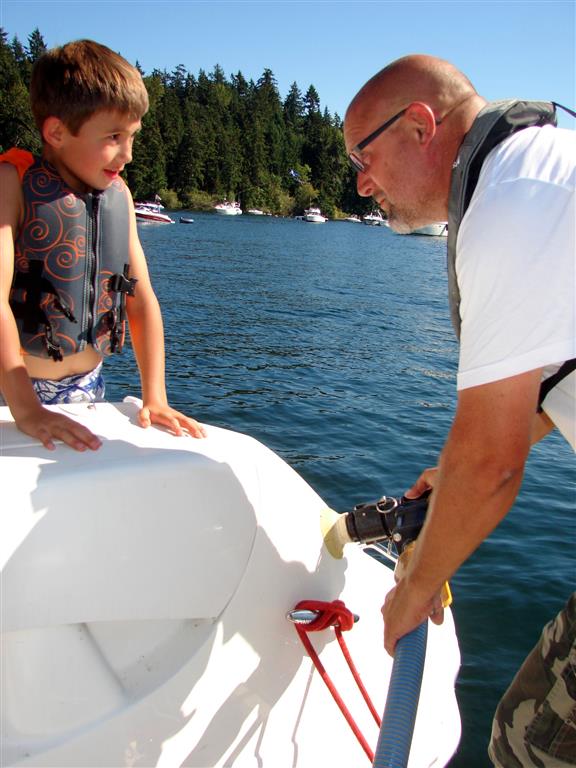 Terry & Sons brings its mobile pumpout service to boaters free of charge. His new service in Gig Harbor is ready to go, with his boat moored at Gig Harbor Marina & Boatyard for easy access to customers in the harbor.

Terry & Sons now has a contract with the state well into the 2020’s. The business has expanded to several locations with a full-time employee and two part-time employees. Plus, Durfee is looking for an operator of the pumpout boat in Gig Harbor.

“I’m excited about expanding, and a bit overwhelmed,” said The Pumpout Guy. “This is something that’s turned into a great project. The word is out and people are getting to know me. It’s got me running.”

Which is a good thing for boaters in Gig Harbor.

It’s easy to arrange your pumpout with Terry & Sons in Gig Harbor. Just go to PumpOutGuy.com and schedule a visit by The Pumpout Guy. For more information, call Durfee at (206) 437-6764.