By now you have probably seen the news and social media coverage of the pleasure boat that hit a gray whale near Whidbey Island on Sunday morning.

Capt. Thomas Bliss, director of the Northwest Maritime Academy at Gig Harbor Marina & Boatyard, drew our attention to the story early this week, and it’s a painful reminder for boaters: We all need to become whale wise and be on the lookout when cruising through Puget Sound this time of year.

Video taken by a passenger aboard the whale watching vessel, the San Juan Clipper, shows a power boat speeding through an area being viewed by some 200 spectators on the idling whale watching boat. Another whale watching boat is seen in the background, keeping a respectful distance while observing the 45-foot behemoths feeding on April 23.

A cluster of boats bobbing around an area with lots of people onboard observing the water is a signal to slow down and look around, reminds Bliss.

“When we see whale watching boats, that usually means whales are in the area,” he said. “Boaters need to be aware of safe zones and regulations around whales.” 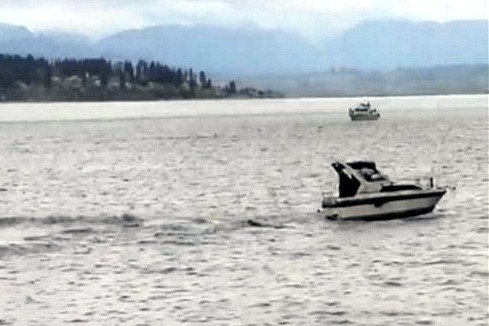 Apparently, the whale was in a group of three grays known individually as 49 (also called “Patch”), 22 and 383. They are among the 10 or 11 gray whales that have been spotted for many years in Puget Sound on their annual migration from Mexican breeding waters to Alaskan feeding waters.

Follow These Guidelines & Local Laws in the Presence of Marine Wildlife:

According to the King 5 News report, the gray whale that was recently struck may have been the well-known “Patch,” first photographed in Puget Sound in the 1990’s. Spectators on the San Juan Clipper were shocked to see the boat zipping through an area of idling whale watchers, then horrified when it hit one of the whales. They watched as the impact jolted the power boat out of the water.

“We were watching the whales, and then this guy comes blowing through really fast,” said Lisa Shannon who was aboard San Juan Clipper. “We were all commenting, ‘What’s that guy doing?'”

Just then, the back of a whale emerges from the water, and video shows the speeding boat being knocked into the air.

“It looked like he was headed straight for the whale, and he was, and he hit it, and we were just shocked,” Shannon said. “He hit the whale at full speed. It seemed like he sped up to get through the boats like they were in his way.”

A naturalist aboard the whale watching charter took pictures of the vessel operator. They were sent to the Washington Department of Fish and Wildlife, along with the video. Wildlife agents were able to track down the boater. WDFW says they have taken a statement from the driver and he was cooperating with their investigation of the incident. 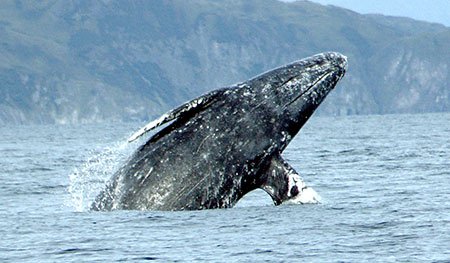 Gray whales are baleen whales that migrate between feeding and breeding waters each year. They reach nearly 50 feet in length, weigh around 40 tons and live between 55 and 70 years. The gray whale has a dark slate-gray color and is covered by characteristic gray-white patterns, scars left by parasites that drop off in cold feeding waters. They have two blowholes on top of their head, a feature that can create a distinctive V-shaped blow that reaches 10 feet into the air.

The annual gray whale migration extends from the Baja Peninsula to the Bering Sea. The grays make a detour from their off-shore route to feed on ghost shrimp in Puget Sound in March and April. They are now feeding off the Snohomish Delta near Everett in shallow water, about 10 feet deep, according to whale watching websites.

The area around Everett, Camano Island and Whidbey Island is popular with grays due to the robust shrimp population for building up fat stores for the remainder of their journey to Alaska. 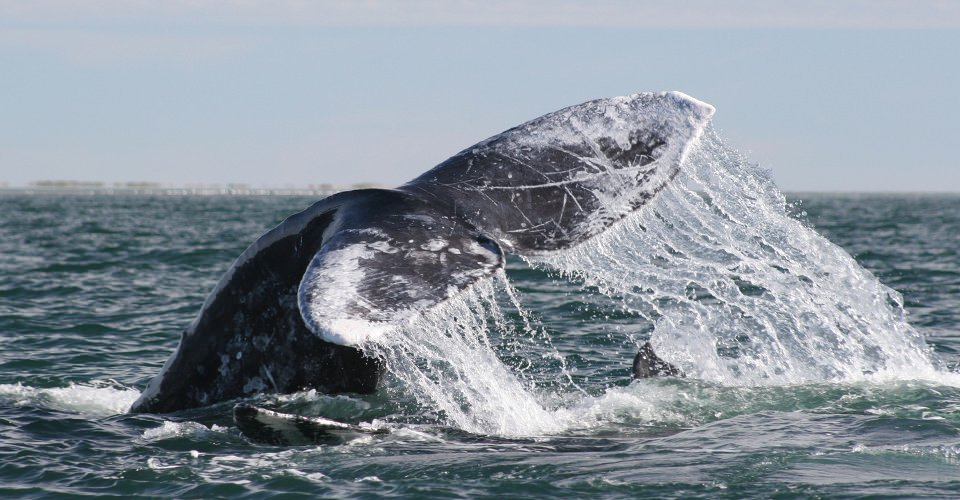 So boaters, be whale wise and give whales space. Of course seeing killer whales, grays and other marine wildlife in their natural environment is a thrilling experience. But remember that our presence has an effect on their habitat and livelihood.

When we get too close, approach too fast, or make too much noise, we may be disrupting these activities and causing the animals unnecessary stress. In some cases, we may be threatening their lives.

Set an example for others, become whale wise and help protect our spectacular marine resources.

Like Loading...
Posted in Blog and tagged Boaters need to be whale wise, Boating guidelines for whales, Keep your distance from whales, Respect marine wildlife when boating
← ‘Nap Tyme’ Awakens After Ferry HitRent The Club for a Summer Concert →