Gig Harbor’s namesake, the replica of the survey gig that discovered this “excellent little bay” in 1841, stopped by the boatyard last week for some restoration on her wooden hull.

It’s always fun to see the Porpoise come to the yard. After all, the 25-foot “captain’s gig” replica represents the very heart of Gig Harbor’s rich heritage. You can’t help but imagine what it must have been like for the crew of the U.S. Navy Survey Gig to come upon this nearly hidden entrance to Gig Harbor’s quiet bay for the first time.

Gig Harbor was discovered by a survey crew led by Midshipman Joseph Sanford as part of the 1841 Wilkes Expedition sent by the U.S. Navy to survey the coastline and waters of Puget Sound. 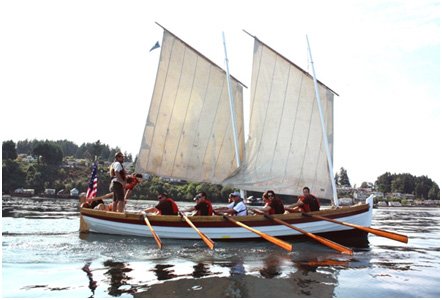 Of course, while our little bay was a first-time “discovery” for the government-commissioned survey crew, rowing and sailing the gaff-rigged longboat around south Puget Sound from the 224-ton brigantine, the USS Porpoise, it already served as home to a branch of the Puyallup Tribe. The native residents called the harbor “Twa-wal-kut” and traded peacefully with the survey crew.

This fascinating history of the “gig” in Gig Harbor is a passion for Doug McDonnell (in photo at top), volunteer, member and self-proclaimed “apprentice shipwright” at the Gig Harbor BoatShop, which owns and operates the Porpoise. He was at Gig Harbor Marina & Boatyard seeing to the restoration and maintenance work being done on the gig the day I stopped by to take pictures.

“They do nothing but top-flight work here at the boatyard,” he said as we started our conversation. “They are just the best and I can’t say enough about them.”

Then the Gig Harbor resident and south Sound native went on to refresh my memory on the details of the Wilkes Expedition and the replica of the survey gig that literally put Gig Harbor on the map. (See previous Porpoise Haulout blog from Sept. 10, 2015.)

McDonnell quoted his favorite passage from Midshipman Sanford’s logbook: “May 15, 1841. Pulled into an excellent little bay whose entrance is concealed from the Sound and measures 10 to 15 yards, too small for a ship, but just right for a gig.” 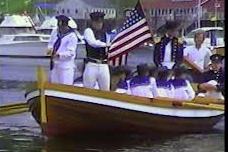 The British had been here 49 years earlier, “and all they did was name the big stuff,” McDonnell said in a May 2016 Tacoma News Tribune article on the 175th anniversary of Gig Harbor’s discovery by the Wilkes Expedition. To honor the anniversary, BoatShop members rowed the Porpoise into the mouth of the harbor in a re-enactment of the gig discovering the bay.

Capt. George Vancouver’s Expedition of 1792 named “big stuff” such as Whidbey Island, Vashon Island, Admiralty Inlet, Mt. Rainier and Mt. Hood, McDonnell said. So one of the tasks of the Wilkes Expedition was to name everything Vancouver didn’t name.

“The Americans showed up in 1841 and realized this was a golden opportunity for them to lay claim to everything by naming it,” he said.

Local names, such as Point Fosdick and Fox Island, were given in honor of crew members on the expedition. But Gig Harbor is the only area landmark named for a boat, making the gig a special piece of the harbor’s heritage, said McDonnell. 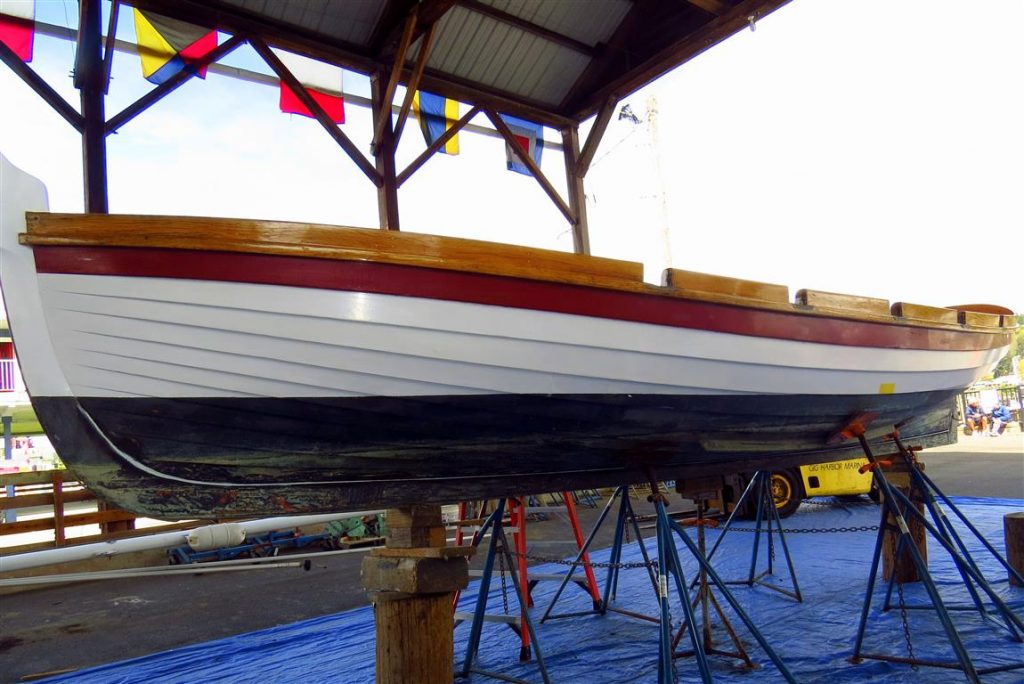 Gig Harbor’s namesake replica “gig,” made of Western Red Cedar and oak, weighs in at just under 2,000 pounds.

The Porpoise was built as an exact replica of the original survey gig through consultation with a Navy historian from the Smithsonian Institution for the 1989 Washington State Centennial Celebration, McDonnell explained. Looking to an expert from the Smithsonian was very fitting, he continued, since the institution was founded as a depository for the specimens of plant, animal, shell, mineral and even seawater in jars brought back from the U.S. Navy’s Exploring Expedition that circumnavigated the globe from 1838-1842. 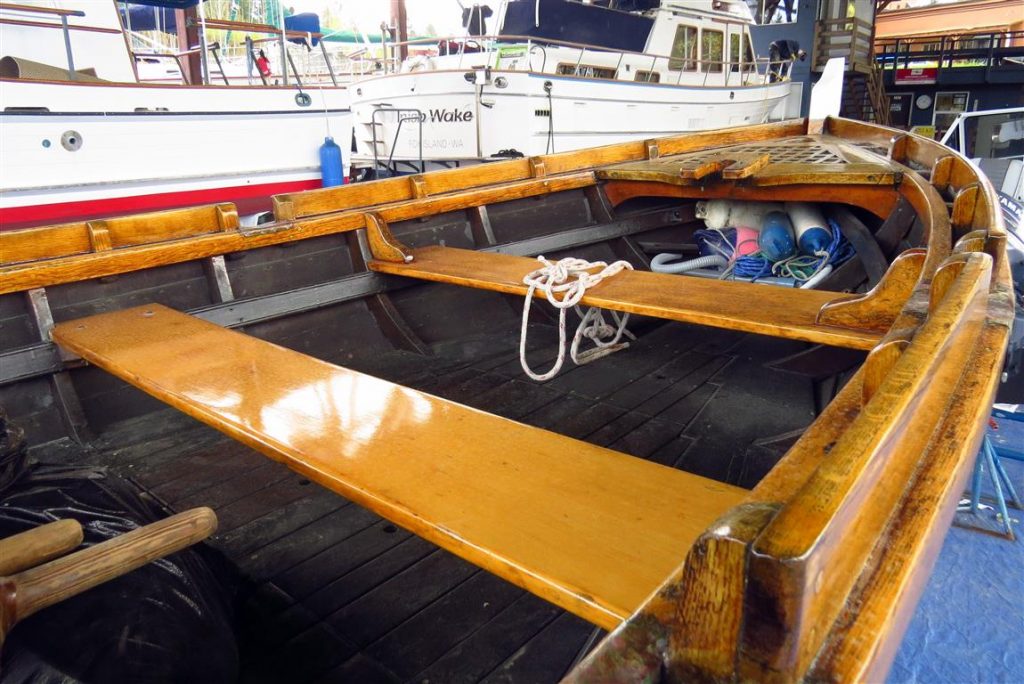 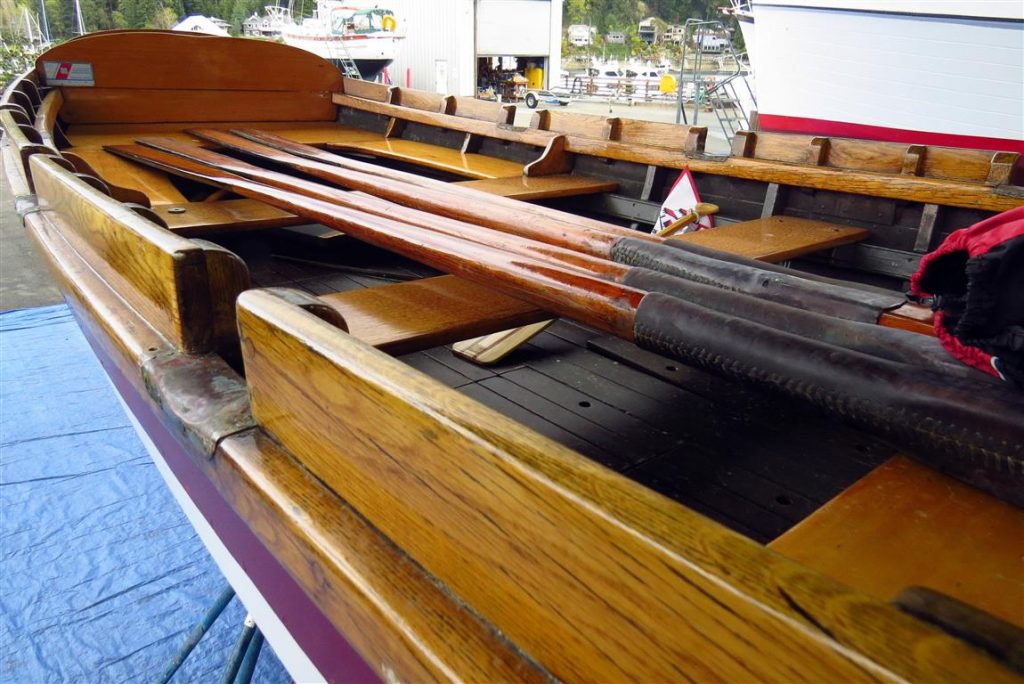 The museum’s Navy historian was consulted on everything right down to what color the gig would likely have been painted in that time period. Other vessels from the era depicted in the centennial exhibit indicated light colors on boats, which did not have standardized color schemes until right before the Civil War, McDonnell said.

Gig Harbor’s all-wood longboat was the premiere centennial exhibit at the Washington State History Museum that year, he added.

“She is built of Pocock Cedar,” he said. “That’s the same Western Red Cedar used by the eight-man racing shell that won the gold medal in the 1936 Olympics in Berlin.”

Of course, as fans of the bestselling book “The Boys in the Boat” know, he is referring to famed racing shell designer and builder George Pocock, who helped nine young working class students from the University of Washington take the elite rowing world by storm and win the Olympic gold in front of a chagrined Adolf Hitler. 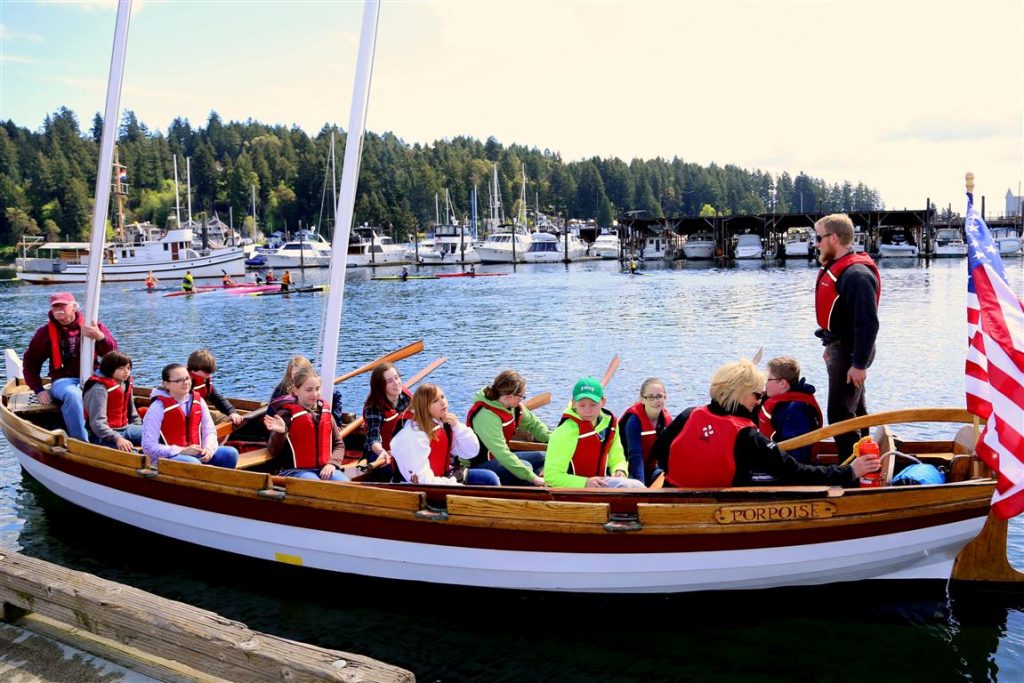 The community got to see the Porpoise in action with the retrieval of the town’s 25-year time capsule in April 2014.

The 10 rowing station-Porpoise also boasts historically accurate oak rails and frames, but it was her cedar hull that needed some repairs this time.

“After three years she needed a bit of a refit,” said McDonnell. “She hadn’t been re-caulked since we built her in 1989 and she was getting a little bit of weepage on her hull between the keel and garboard.” 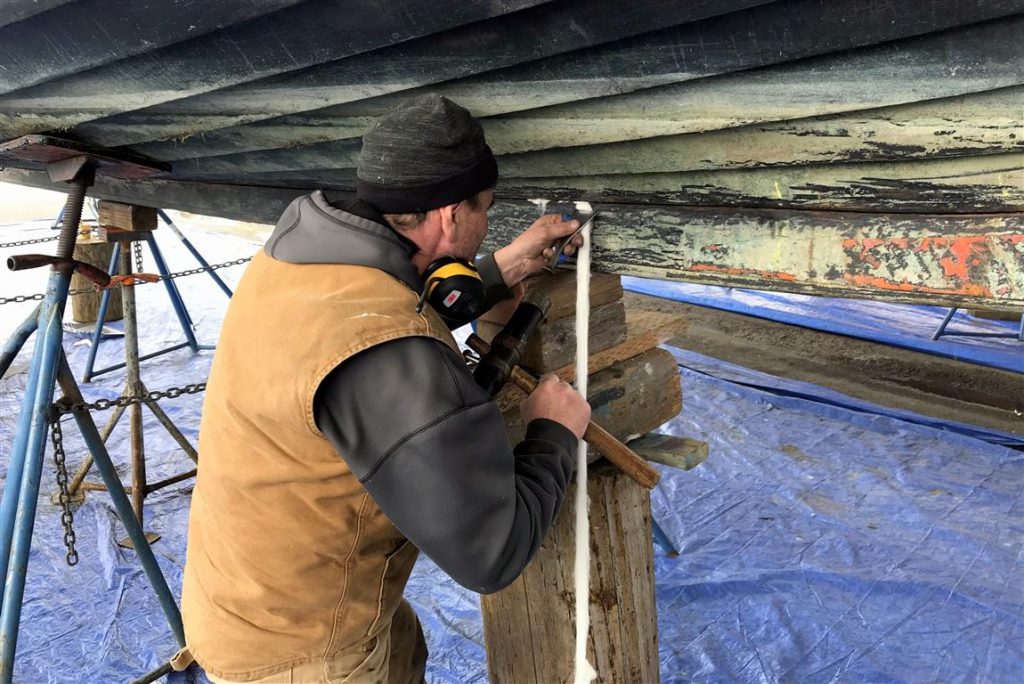 The BoatShop’s shipwright Nate Slater — who is also leading the restoration of the purse seiner Shenandoah at the Harbor History Museum — did the corking and sealant work, then the gig got a fresh coat of bottom paint before she was re-launched earlier this week.

Experience this Piece of Community Heritage 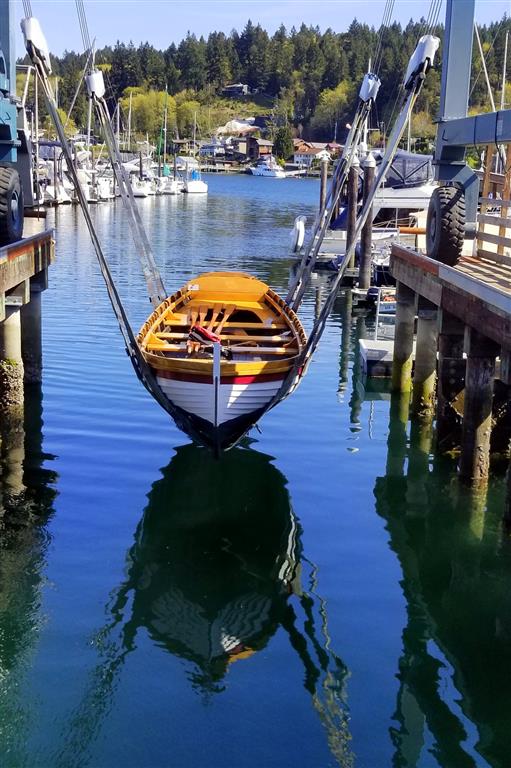 “We plan to make her available to the general public this summer,” said McDonnell. “Our goal is to have a nice moorage at the BoatShop and take people out in the harbor to enjoy it.”

After all, the gig is a big part of the heritage of this excellent little bay.

— Photo at left by Travelift operator Mark Rybin, who quipped, “The Gig is up,” as he launched the Porpoise earlier this week.