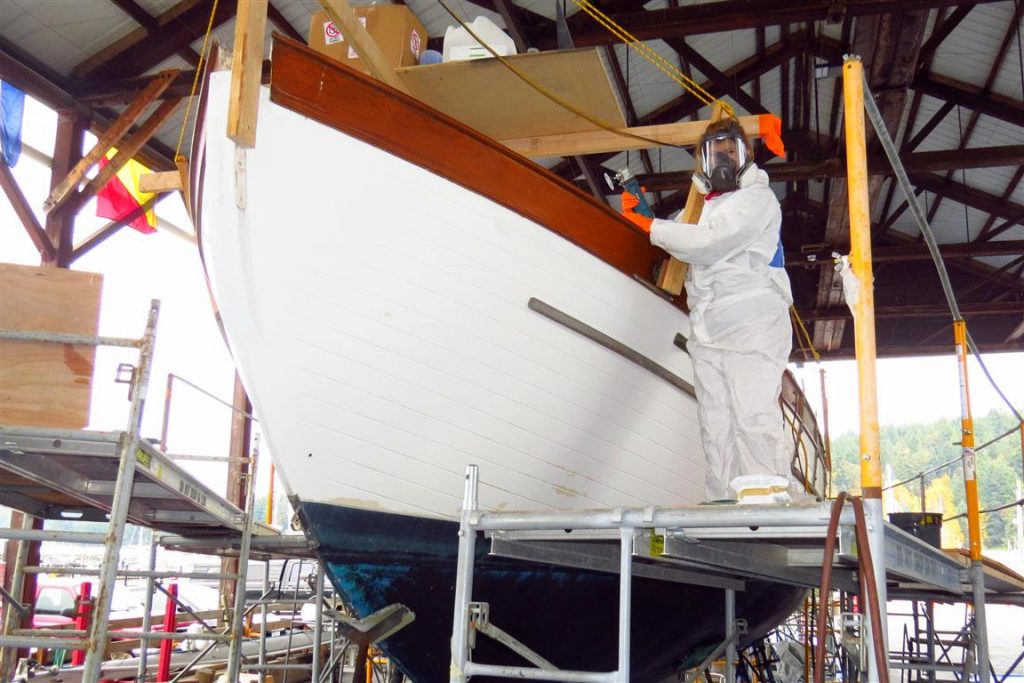 When first-time boat owner Maria Naples bought her sailboat, she knew she would take an active role in working on her.

“This is my baby,” she said of Grace, her Union 36 full keel cutter. “I have to learn how to take care of her.”

So there she was, up on scaffolding in hazmat gear, grinder in hand, working on Grace with the loving care of a new parent as her boat sat cradled on the hard at Gig Harbor Marina & Boatyard.

The cutter rig is at the boatyard for some deck work before her new owner takes her home. Shipwright John Iverson is redoing her whole deck, said boatyard service manager Chris Hawke. The deck core was rotten so Iverson stripped off the teak decking, cut panels out of the fiberglass to remove the wet core and then replaced and re-fiberglassed the deck. 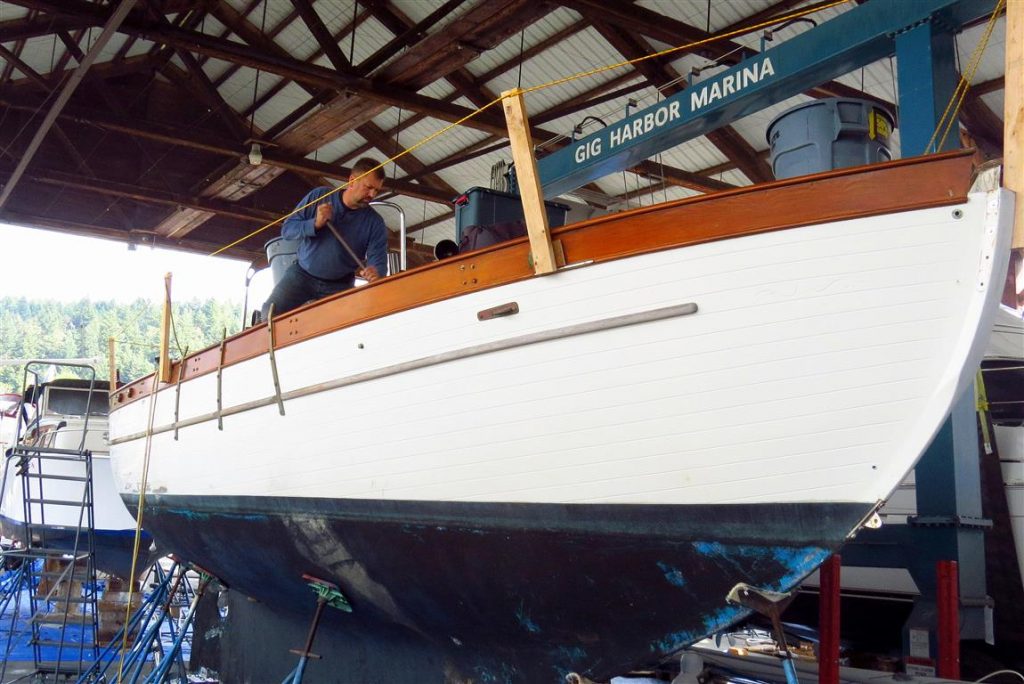 Gig Harbor Marina & Boatyard shipwright John Iverson pries out old, wet deck core on “Grace” in order to give her all new decking.

That’s where proud new owner Maria, who had just relocated to the Gig Harbor area from Massachusetts the week before, came in to help. She was smoothing and grinding the new fiberglass the day I saw her up on the scaffolding next to Grace. She was new at boat repair, but she looked like a seasoned pro.

“That’s only because John Iverson is showing me what to do,” she explained. “He’s a real artist and he’s a great teacher. He’s Grace’s shipwright. Before I owned her he worked on her. He told me, ‘Oh yes, I’ve worked on her before.'”

So Naples assisted and learned as Iverson worked to repair the boat’s deck. They laid the new fiberglass, let it cure and then Maria helped grind and fair the surface. 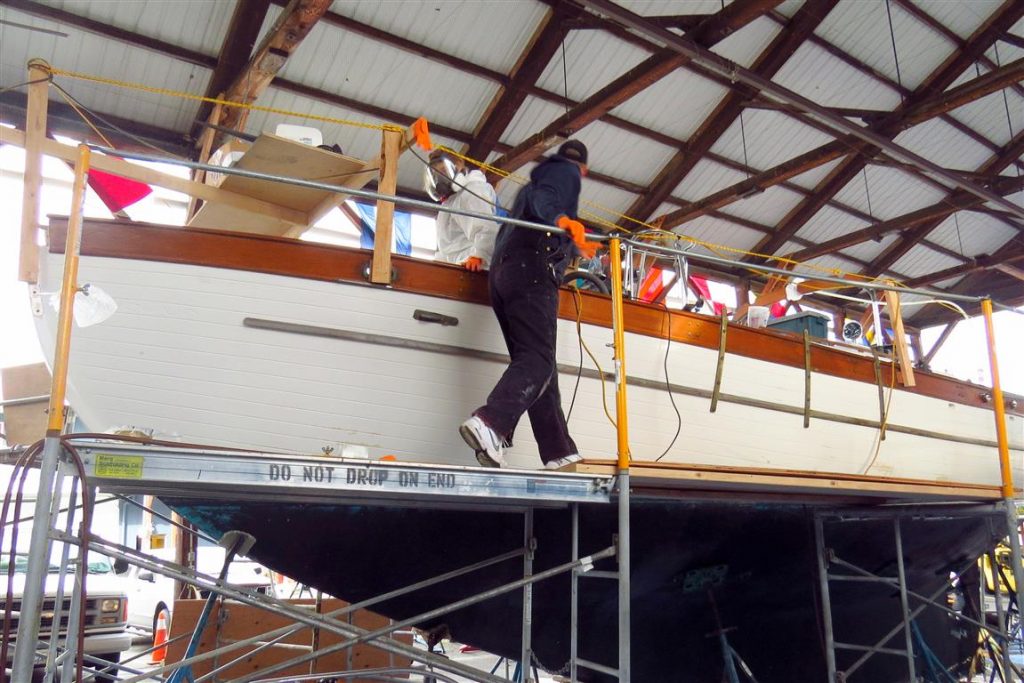 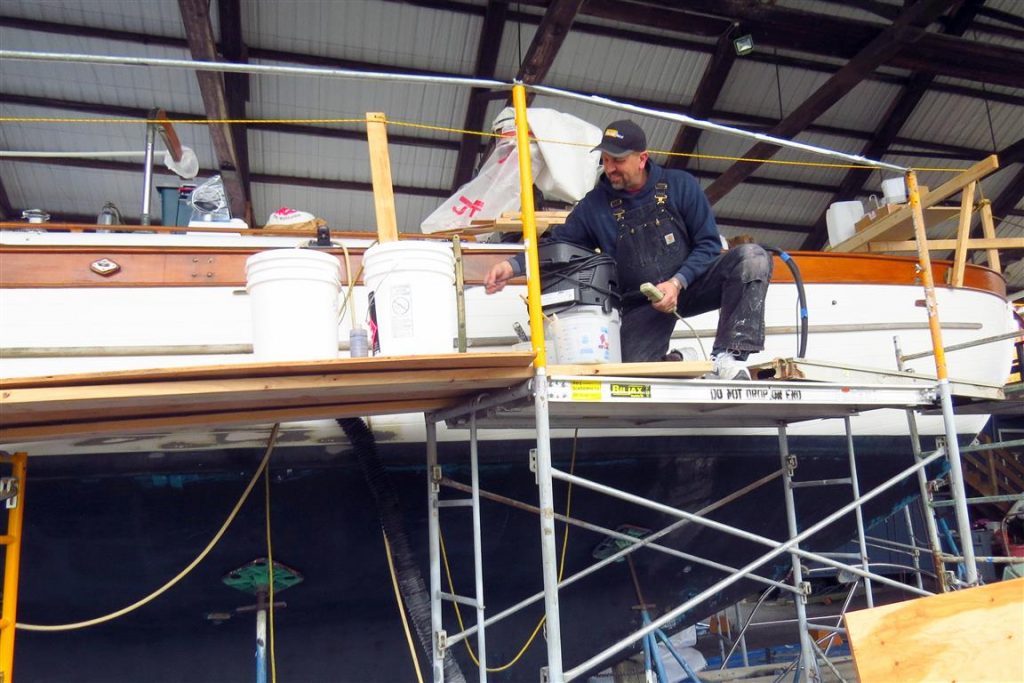 “John said I did a good job,” she said proudly, after a day’s work on Grace. “I’ll tell you, though, I’m aching today!”

“I came out here to sail Grace.” – Maria Naples, new boat owner who relocated from Massachusetts

Naples bought the full keel cutter from a yacht broker in Port Orchard last April, then moved to the area from Danvers, MA, in early November — “I came out here to sail Grace,” she said simply, although it was no simple matter to pick up and move.

The move is a culmination of several years’ planning to relocate across the country to the Pacific Northwest.

Maria already had the sailing bug in New England, living near the sailing community of Marblehead, MA. There, she met a lot of cruisers and racers and felt fortunate to be part of a crew that sailed a J130. 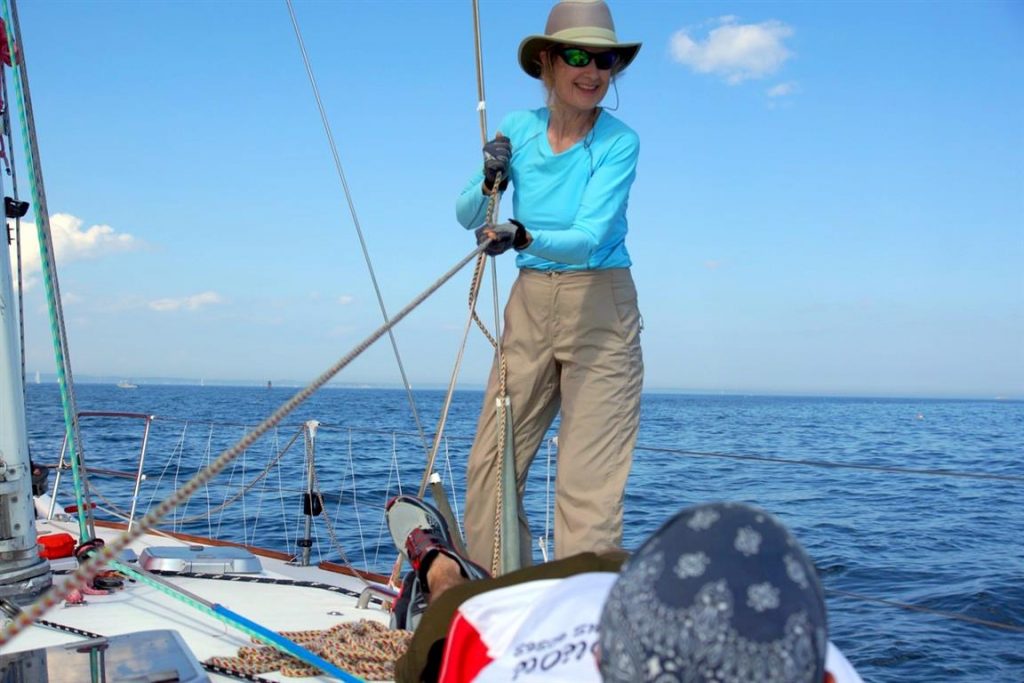 Maria Naples works the spinnaker sheet while crewing on a different boat a few years ago.

She attended a women’s sailing conference, where she met Port Townsend’s renowned Nancy Erley, who has captained two circumnavigations around the world; then about four years ago, Naples signed up for a week of sailing in the Northwest’s jewel, the San Juan Islands.

“I absolutely fell in love with it,” she said. “Then I took another cruising lesson, an overnight sail out of Fort Lauderdale to the Abaco Islands (the northern Bahamas, east of southern Florida) and I fell in love with it. We were on the same tack all night long.”

The sailing seed firmly planted now, Maria started watching listings to get a sailboat of her own. It was a search that took years — something that she has found is typical in boat-buying. After years of searching for just the boat that met all her must-haves, the right one was found in in far-away Port Orchard, Washington.

“I found her online and bought her from Robert Heay’s Yacht Sales,” she said. “I called him and he never thought I would show up from across the country.”

But she did and she found her baby, Grace. 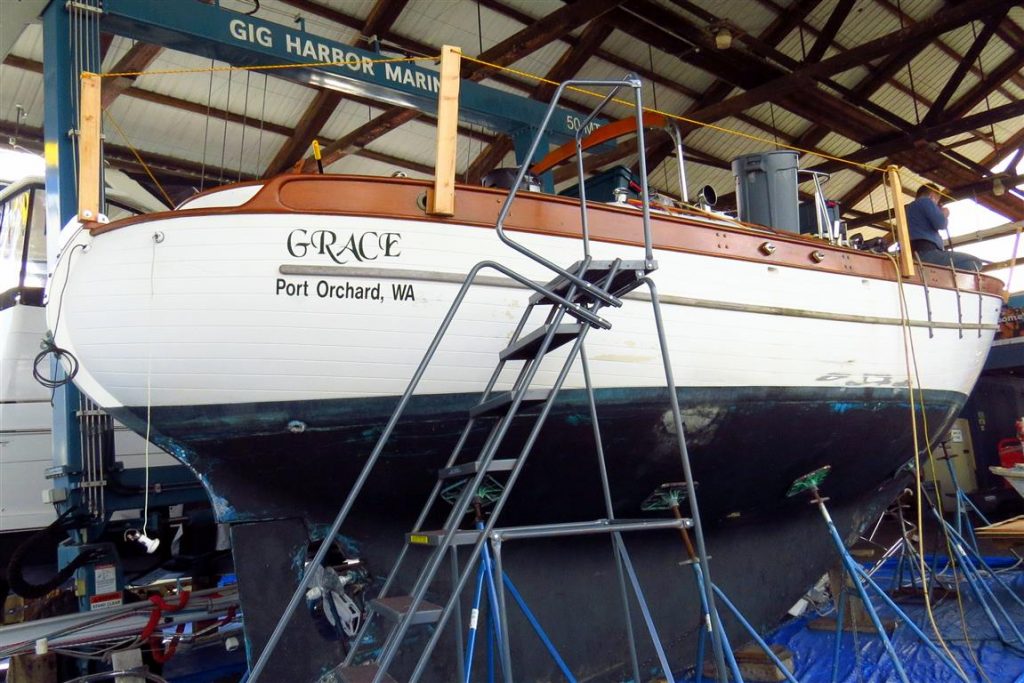 Boat owner Maria Naples is getting to know her new cutter with the help of shipwright John Iverson at Gig Harbor Marina & Boatyard.

“Grace met my criteria,” said Maria, who plans to live aboard as soon as she finds a live-aboard marina slip. “I wanted a full keel, a wheel rather than a tiller, a shower, a double bed, three burners on the stove. I wanted a cutter rig, double-ended, and I wanted a Lord Nelson and those are hard to come by. So Grace had everything.”

She even had a name that really was fit, says her new owner.

“I had planned to name her something else,” Maria said. “I was going to name her Abiento, which means “see you later” in French. Then I met Grace and it really fits her. I’m very happy with her.

“Now Grace and I have to become much better acquainted,” she said. “She’s a good girl. She’s already been to Alaska and Australia and now I want to learn Grace and Puget Sound.” 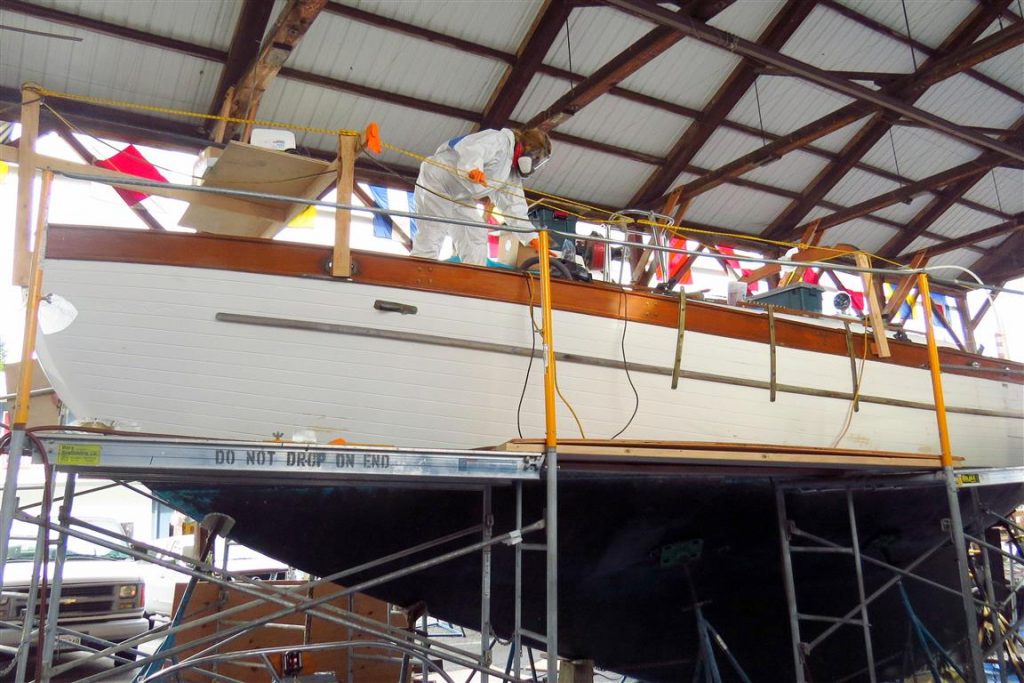 Maria Naples, who purchased “Grace” last April, is planning to live aboard when a slip becomes available.

Helping out with her repair at Gig Harbor Marina & Boatyard is a good start toward that.

“It’s been absolutely wonderful getting my hands involved with Grace,” she said.