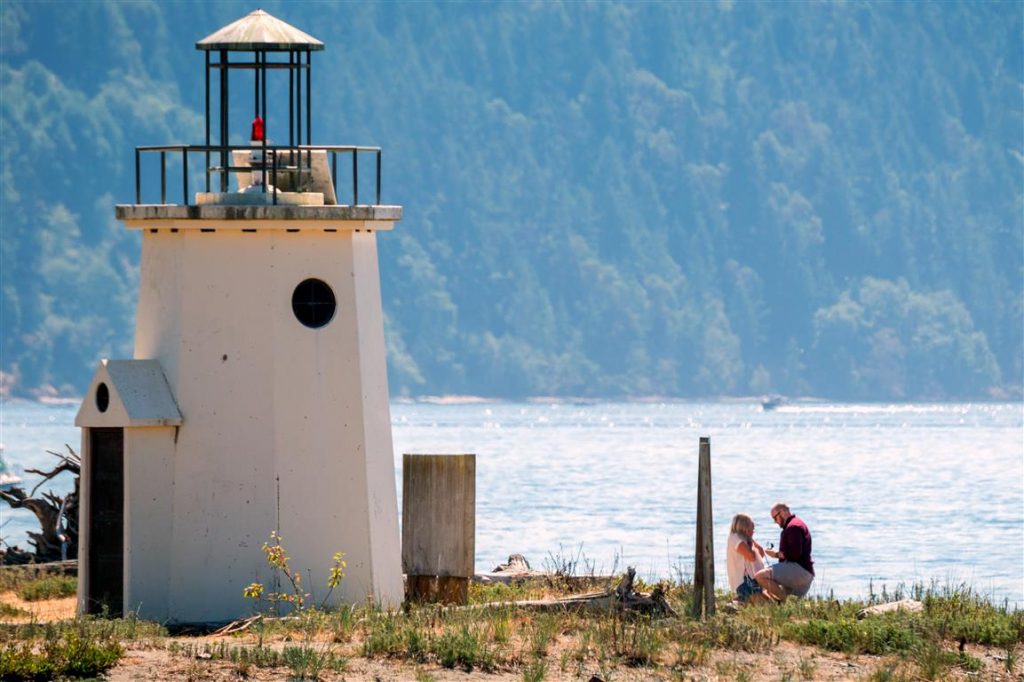 Gig Harbor native Olivia Sparks didn’t think anything was up when she and her boyfriend just happened to end up at Kenmore Air on South Lake Union after brunch in Ballard on Sunday. After all, the two Seattle residents had talked for years about taking a seaplane ride, so she merely thought he had finally planned it.

Little did she know just what Oliver — yes, they are Olivia and Oliver — had planned for her that day. It was a “day date” of sweet surprises that ended with a marriage proposal on the Gig Harbor spit, back at home in front of the lighthouse that her father designed — and which was built right here at Gig Harbor Marina & Boatyard 30 years ago.

It was very fitting that it all took place at the lighthouse, which holds a special place in Olivia’s heart (and on her back as you’ll see as you keep reading). Her father, Stevenson Sparks, designed the 15-foot-tall lighthouse built by Wade Perrow Construction and Lone Star Concrete in 1988.

The concrete structure was built on the bulkhead at Gig Harbor Marina & Boatyard, remembers long-time employee and former boatyard manager Mark Rybin, who located photos of its construction. When it was finished, Manson Construction Company ferried the lighthouse to the spit and lowered it onto the selected site for free. 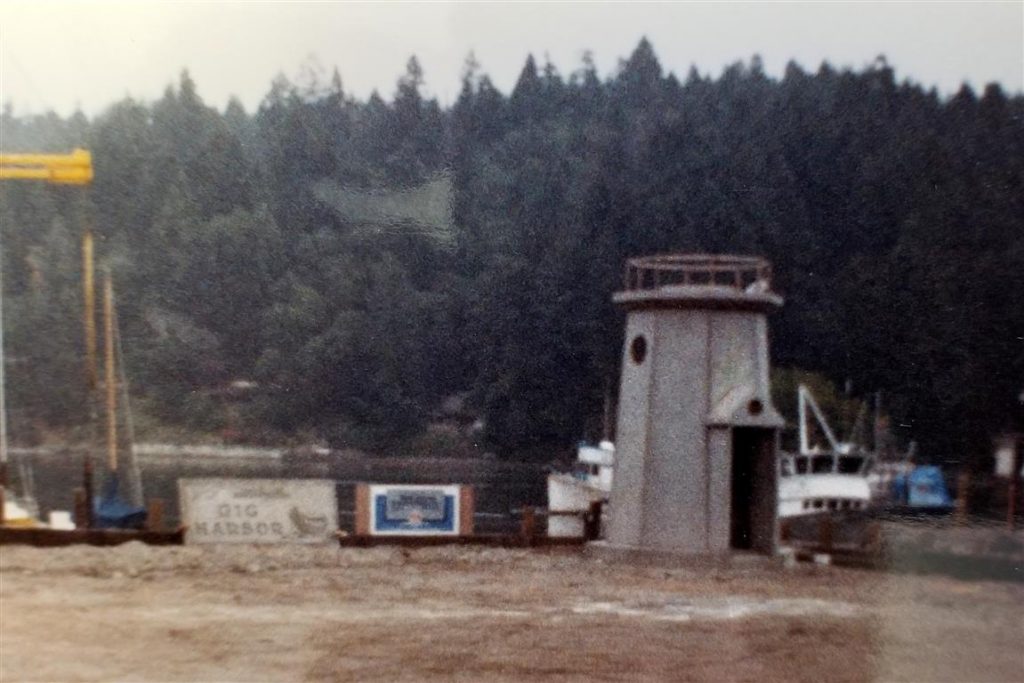 This photo by Mark Rybin shows lighthouse construction under way in 1988 at Gig Harbor Marina & Boatyard.

The new lighthouse replaced a minor aid to navigation that formerly occupied the site, and for the past 30 years the Gig Harbor Lighthouse, displaying a red flashing light, has marked the entrance to the harbor. 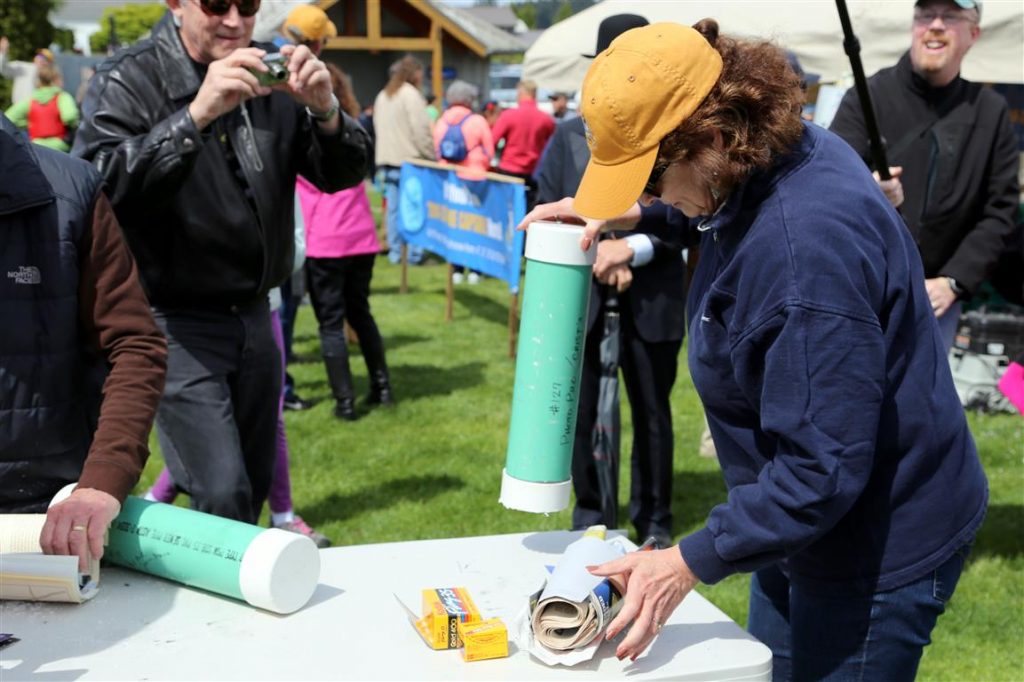 Gig Harbor residents enjoyed re-opening their time capsules on the 25th anniversary of the lighthouse in 2014.

Olivia, a 2007 Gig Harbor High School graduate, and her family were at Skansie Brothers Park for the re-opening ceremony 2014, and they put together a new time capsule to be opened in 2039.

“Oliver planned the lighthouse beach because he knows it’s a special place for me.” – Olivia Sparks.

So now, here is Olivia’s account of the very special day she had at the lighthouse this past Sunday, Aug. 5. And guys, no pressure here, but fiance Oliver McIntosh has really raised the bar with his sentimental and carefully conceived proposal:

“Oliver and I have been together for almost four years. The proposal was not expected and I wanted it that way. Completely a surprise so we never talked about engagement/wedding plans, a timeline or went ring shopping. This was completely his plannng! He did get my parents’ permission and consulted my best friend for some ring help.

“Oliver woke me up in the morning and told me we were going on a day date. We went to brunch in Ballard and then headed to South Lake Union and ended up at Kenmore Air, so I knew we were taking a seaplane. This wasn’t totally shocking because we had been talking for years about wanting to take a seaplane somewhere but just never got around to it. I just thought he finally planned it for us and it was just going to be a little day trip.” 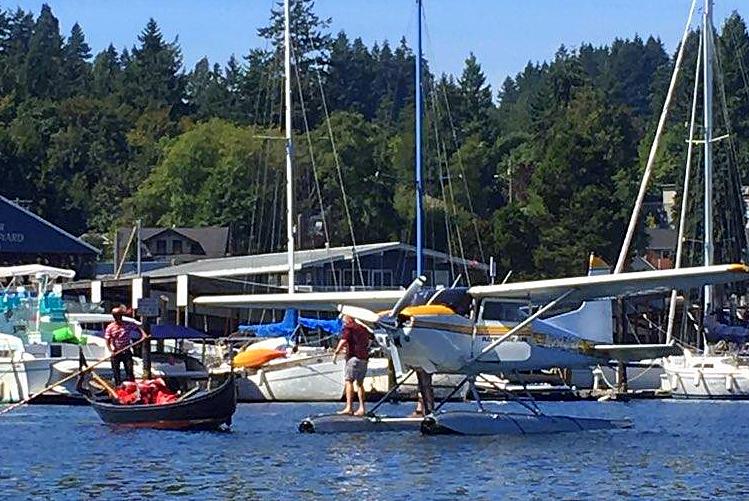 Gondolier John Synco of Gig Harbor Gondola met the Kenmore Air seaplane when it taxied into the harbor. Oliver McIntosh stands on the pontoon to help guide the gondola in under the wing.

When the flight crew slipped and mentioned their Gig Harbor destination, Olivia still didn’t realize what was in store for her. They landed outside the harbor and taxied inside, to the Gig Harbor Gondola waiting nearby.

Gondolier John Synco, in cahoots with Oliver after Kenmore Air gave the future bridegroom the idea of having the harbor gondola take them to the lighthouse spit, loved being part of the romantic proposal.

“I love the symbolism of the lighthouse as a beacon of home and safety.” – Olivia Sparks

“I think this is the first time ever that a gondola has picked up people from a seaplane,” said Sycno. Just to be on the safe side, though, he had Rybin come out in a boatyard skiff as a back-up in case the authentic Venetian gondola couldn’t snug in under the seaplane wings. The gondola fit perfectly and the final destination was next. 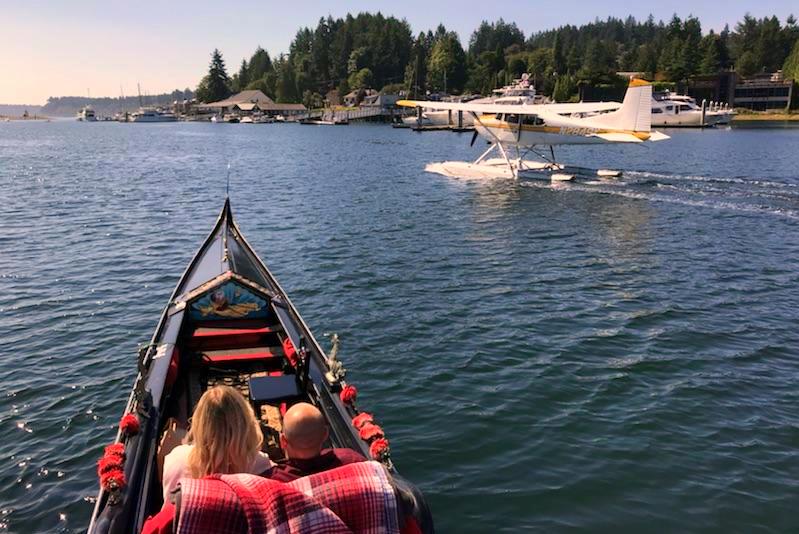 Olivia and Oliver stepped out of the seaplane and into the gondola for Olivia’s final surprise at the Gig Harbor lighthouse, seen in the distance at the mouth of the harbor.

“I had an inkling when the gondola came up and started rowing to the beach,” Olivia continued. “Oliver planned the lighthouse beach because he knows it’s a special place for me. I actually have my dad’s lighthouse blueprint drawing as a tattoo on my back.

“I love the symbolism of the lighthouse as a beacon of home and safety. It feels like such a great sentiment to family and what my dad has been for me and my family my whole life. 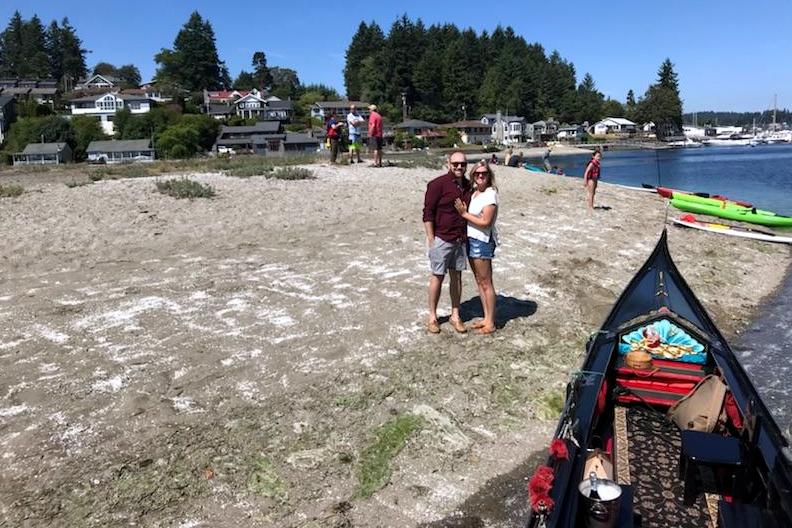 Oliver McIntosh has raised the bar on marriage proposals after planning a “day date” of sentimental surprises for fiancee Olivia Sparks.

“Once we got to the beach, Oliver started acting a little funny with weird small talk to kill some time trying to coordinate with his friend taking pictures across the water, so we did a few laps around the lighthouse. But I just let it happen the way it was going to happen and enjoyed every second. 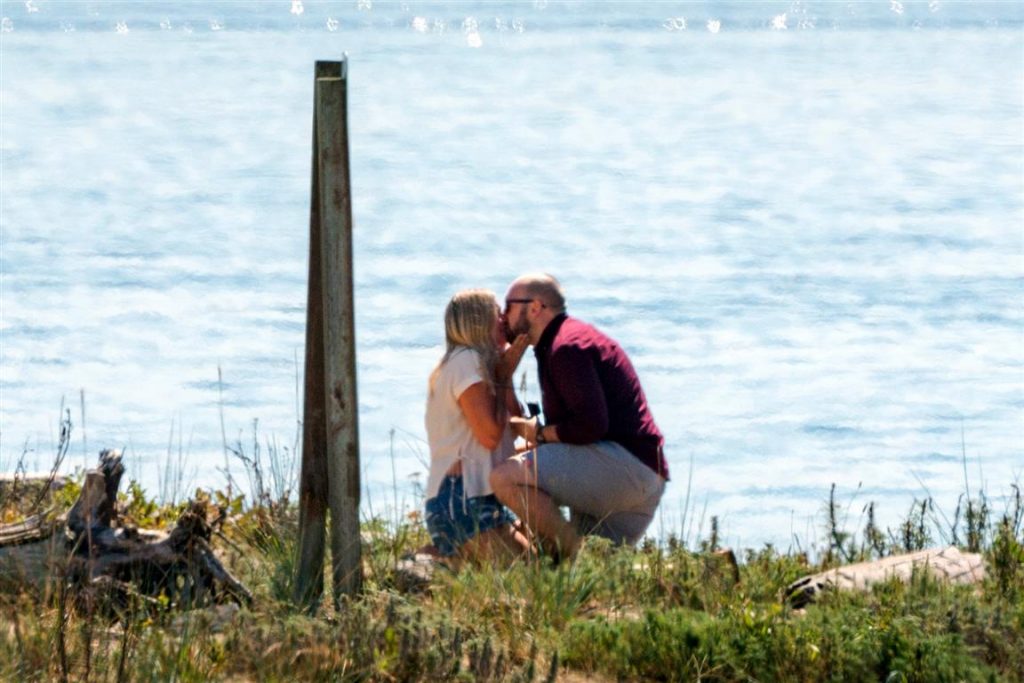 A kiss seals the deal for Olivia and Oliver on the lighthouse spit.

“It was just so impeccably planned and Oliver is typically a ‘fly by the seat of your pants’ type of guy and doesn’t plan a lot of things out like this.” 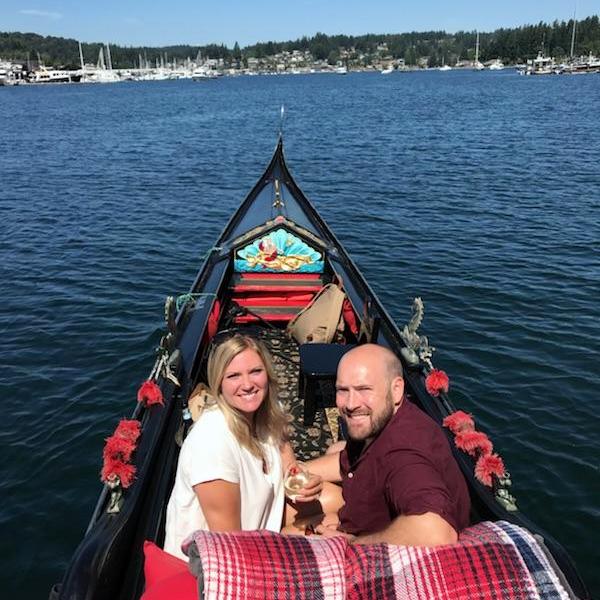 Olivia and Oliver with an engagement toast on the Gig Harbor Gondola.

The couple live in Ballard with their 1-year old Welsh Corgi, Sully, who was waiting on the dock with a “She said Yes!” bandana.

“No date yet!” says Olivia. “Still in the early planning stages and soaking in the engagement. Probably summer or fall 2019.”

Might we suggest nuptials at The Club @ the Boatyard, just to bring the lighthouse proposal story full circle, back to where it all began.

And naturally, another harbor cruise in the Gig Harbor Gondola.