Gig Harbor Marina & Boatyard occupies a prominent space in town, so it’s only fitting that we should also be sitting on a popular corner in the new Gig Harbor-Opoly board game.

We occupy the “GO” — and collect $200 — space on the fun and colorful Monopoly-esque game that you may have seen in local stores over the last few months.

This all-about-Gig Harbor take-off on one of the world’s best-selling board games was developed by the Greater Gig Harbor Foundation to mark its 10th anniversary in 2016. The game showcases many of our town’s gems and iconic views and offers players a chance to “own a piece of the harbor,” say inserts in the game box.

The Greater Gig Harbor Foundation partnered with the City of Gig Harbor, the local Chamber of Commerce and many area businesses and organizations to create the game last summer and fall. Gig Harbor-Opoly hit local stores and online for sales this past December. 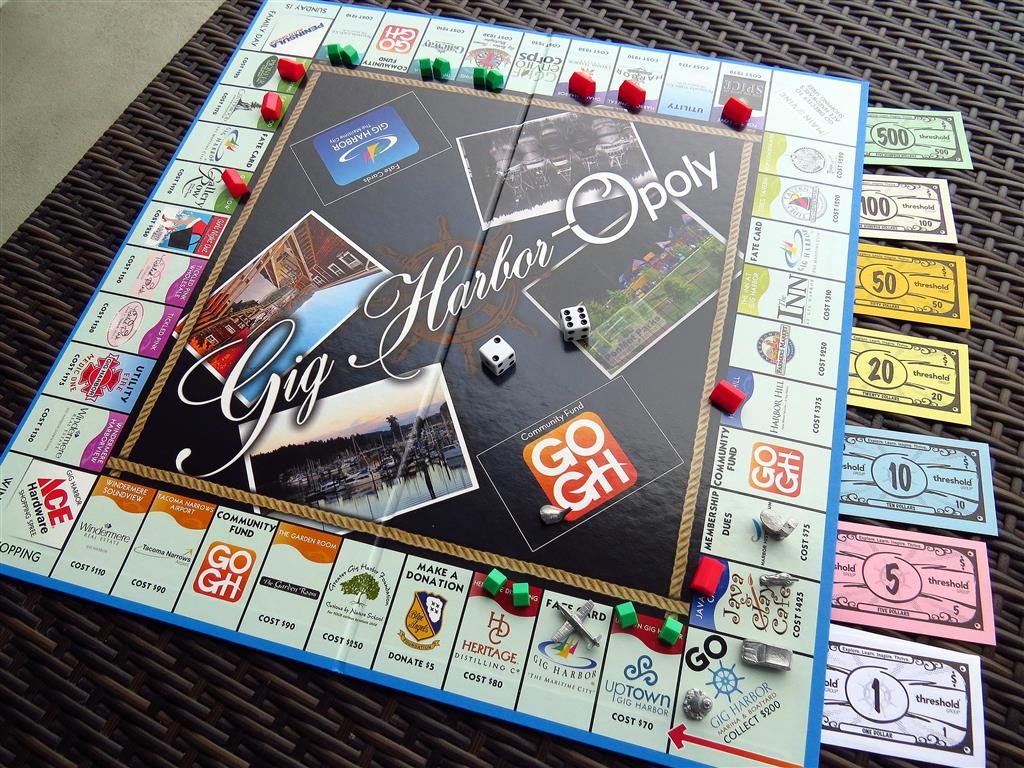 We have our own copy here in The Guesthouse @ the Boatyard, and Chance Busey, the boatyard’s assistant marketing director, and I thought it was about time to get the game out and look at it.

Gig Harbor-Opoly’s lively board is sprinkled with local business logos and colorful photos. The six metal game pieces consist of a sea star, an airplane, a car, the head of a golf club, a toilet (really?) and fittingly, a lighthouse.

Main & Vine occupies what is traditionally the Go to Jail space, but instead, helpfully orders players to “Go Directly to Ace Hardware’s Shopping Spree.” So in the opposite corner at the Gig Harbor Ace Hardware, your lighthouse or sea star is either serving time at the shopping spree or “just visiting” by spending a turn window shopping. Much better than jail time.

Opposite from Gig Harbor Marina & Boatyard’s GO corner is Peninsula Subaru, who instead of offering “Free Parking,” kindly reminds players of its motto: Sunday is Family Day.

Pass GO and Keep on Going to the Boatyard

It’s all in fun and “offers our community a unique opportunity to be part of game board history by becoming a beloved classic,” says the Great Gig Harbor Foundation website.

The game, which sells for $39.99, serves as a fundraiser for the foundation and “is another way to connect the community and highlight some of the unique businesses and organizations that call Gig Harbor home,” said Julie Ann Gustanski, president and CEO of the foundation, when Gig Harbor-Opoly was being developed.

“Like many of the things that the foundation does, (the idea) came to us as the result of a volunteer,” Gustanski said. “We tried to have a really good cross representation from more historic Gig Harbor to current Gig Harbor.”

Board spaces were available for purchase to showcase names and logos of Gig Harbor businesses and organizations, with all the money going toward the board’s production at a U.S.-based company in Ohio.

The foundation’s fundraiser is on-going as the limited edition game is sold online, in local shops and businesses, by schools, area organizations, and at various community events and other high-traffic locations. 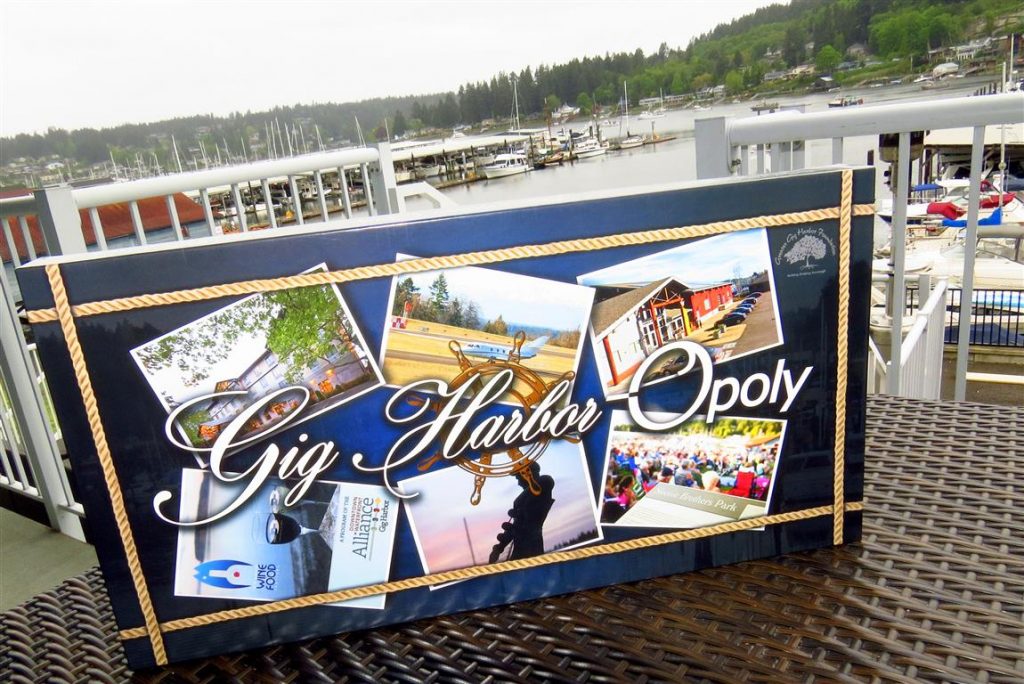 “So, what space do we occupy?” I asked Gig Harbor Marina & Boatyard General Manager Ron Roark before I peeked into the box of Gig Harbor-Opoly.

So come to the boatyard and have fun playing Gig Harbor-Opoly from the deck of The Guesthouse @ the Boatyard. Pass GO, collect $200 and you may just end up owning “a piece of the harbor” — or least enjoying some local businesses and the fantastic view.

Like Loading...
Posted in Blog and tagged Gig Harbor-Opoly game, Play Gig Harbor-Opoly @ The Guesthouse, We are GO @ the Boatyard
← Enjoy View of New Skansie from The ClubFood, Folk & Fun @ Swap Meet →