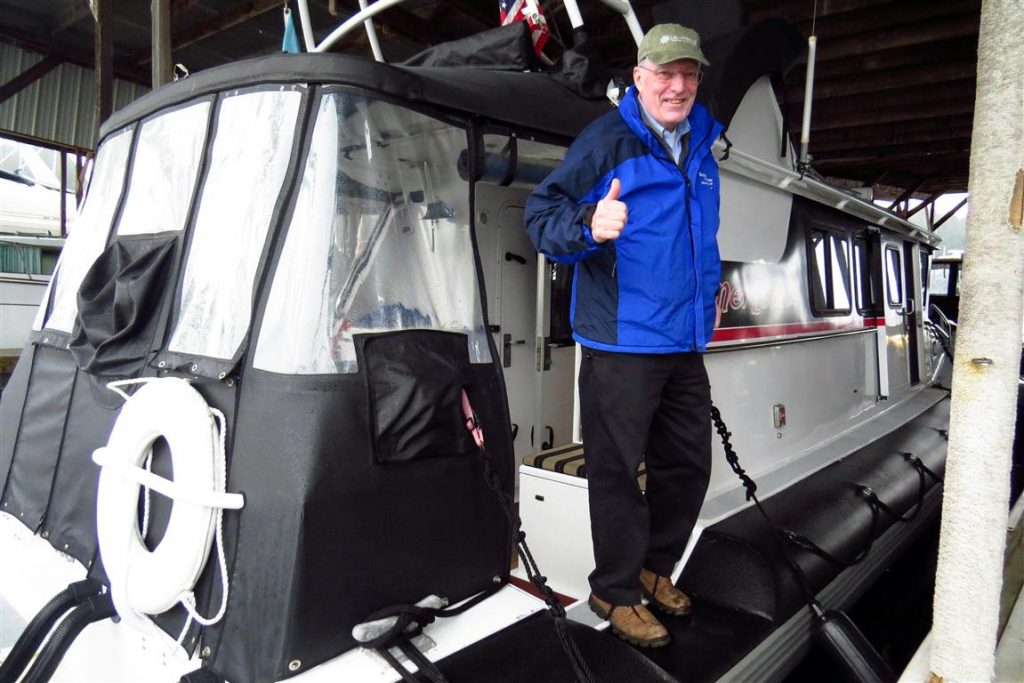 Roark skippered his SAFE Boat MerL’eau as chase boat for the annual sailboat race sponsored by the Gig Harbor Yacht Club on March 18. The windy day made the race a breeze for sailors and race committee alike. 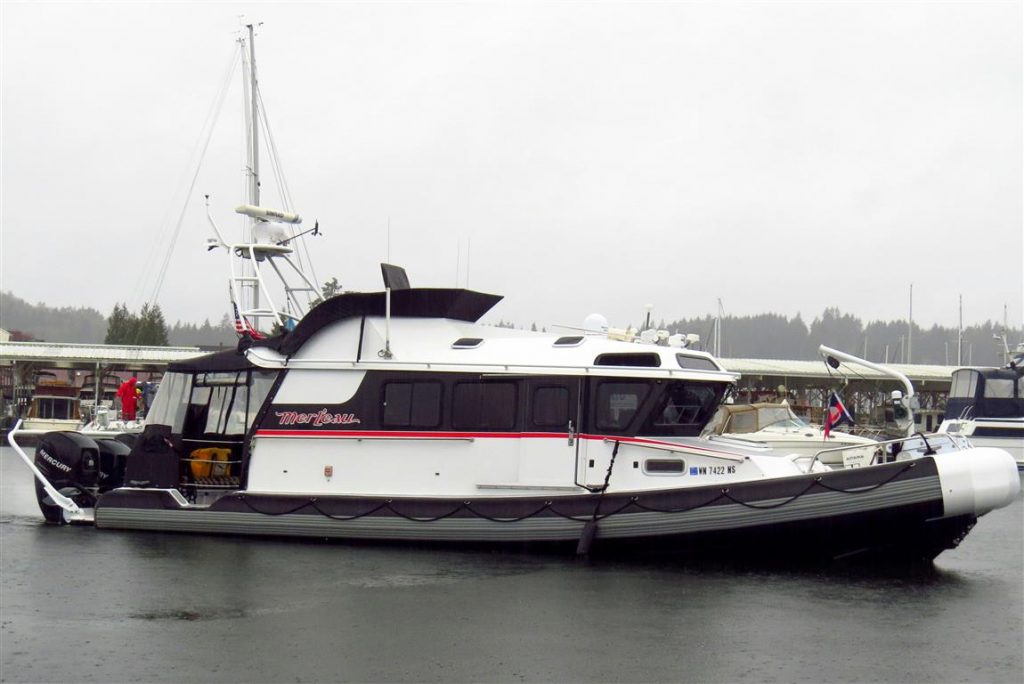 Ron Roark’s SAFE Boat “MerL’eau” leaves its slip at Gig Harbor Marina & Boatyard to serve as chase boat for the GHYC Islands Race on March 18. Sailors are seen getting ready in the background.

“It was a successful day,” Roark said, a long-time member of the yacht club. “It was a very fast race. At Anderson Point I was doing 12 knots and the entire fleet was in front of me.”

The annual GHYC Islands Race is the fourth and final leg of the Southern Sound Series. The nearly 30-mile course takes place primarily in Colvos Pass with the start just outside the entrance to Gig Harbor. Racers sail up Colvos to a turn mark north of Blake Island and then return to Gig Harbor.

Roark had sail Race Chair Jaime Storkman of the Gig Harbor Yacht Club with him on the chase boat.

“This is always the largest sailing activity of the year for our club and brings in boats from Olympia to Seattle,” Storkman said on the yacht club website.  “There is a robust cruising class with or without spinnakers, as well as the usual PHRF handicap classes.”

PHRF (Performance Handicap Racing Fleet) is a handicapping system used for yacht racing in North America. It allows dissimilar classes of sailboats to be raced against each other. 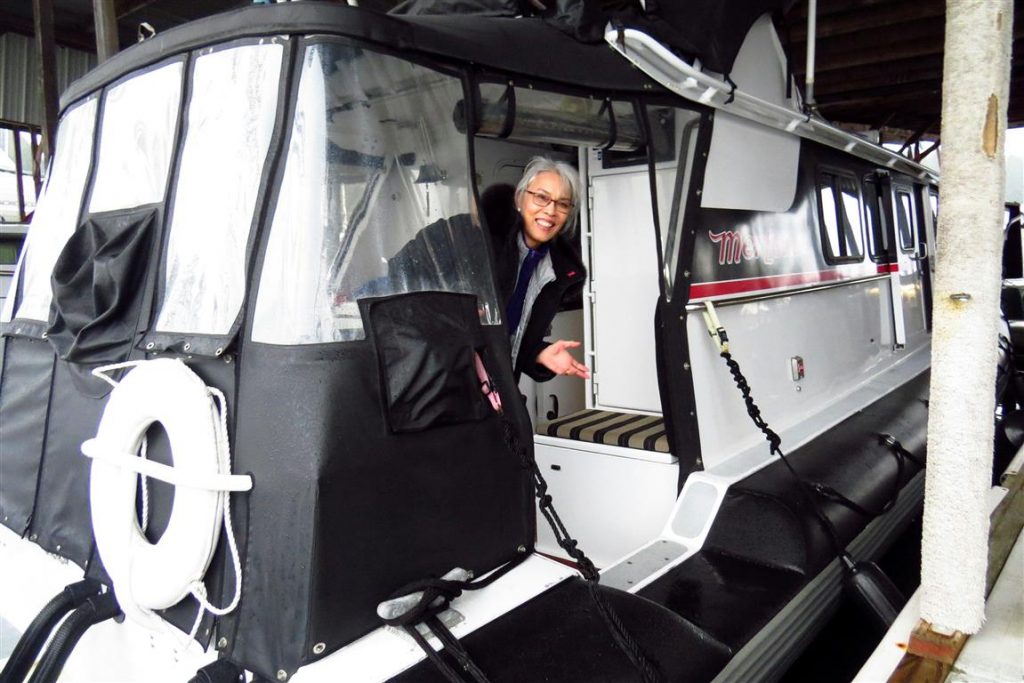 Roark and Storkman easily cruised the sail race course to keep an eye on things aboard 40-foot MerL’eau. The marina and boatyard director has owned the SAFE Boat for 11 years. His choice of a Secure All-around Flotation Equipped (SAFE) Boat out of Bremerton was based on the security that self-righting SAFE Boats provide — a feature that made his wife, Jui Ling, more comfortable on the water, he said.

Thirty-six teams completed Saturday’s Islands Race, which began with a downwind start toward Blake Island in a torrential downpour, according to racers. A building southerly helped the fleet progress up Colvos Pass before the wind momentarily died down in the lee of Blake Island.

Then the sky gradually cleared and the breeze picked up, providing most of the fleet with an upwind leg back through Colvos Pass to the finish off Gig Harbor.

The elapsed time winner was Paul LaMarche’s Santa Cruz 70, Neptune’s Car, which completed the course in just over 4 hours and 34 minutes.

The Southern Sound Series is a series of four sailing races, one a month from December through March. The Series takes racers over most of the scenic southern Puget Sound, from Olympia to Elliott Bay. It is one of the older series on Puget Sound, having been raced yearly for over 25 years. 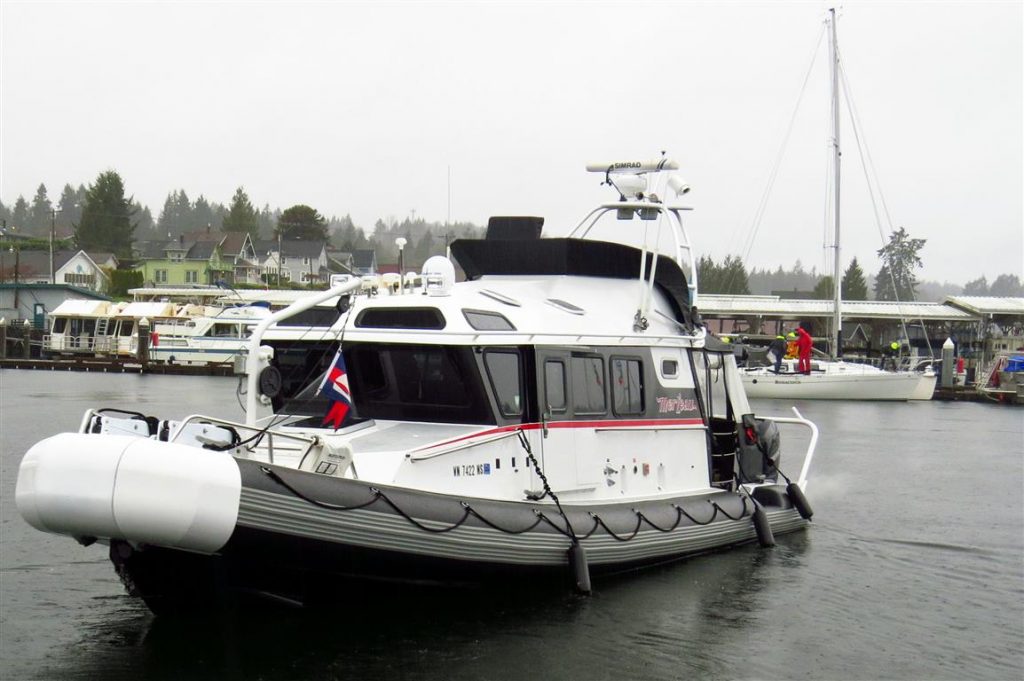 The 40-foot SAFE Boat pushes back from the dock to head to the start of sailboat race outside the mouth of the harbor. The annual 30-mile Islands Race is organized by the Gig Harbor Yacht Club. Racers in the background get their sailboat ready.

Members of any Pacific International Yachting Association (PIYA) affiliated club are invited to race in the Southern Sound Series. Each race starts in a different location and is by a different sailing club. Moorage is provided by the host and a before or after race party is part of the race festivities.